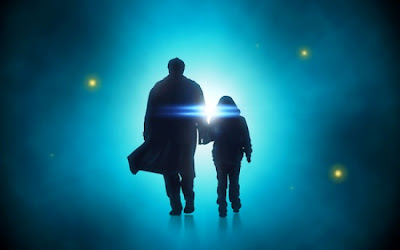 Fringe has finally come to it's conclusion and with it the question of fate versus free will has been answered.  Fate wins free will loses.

Even with the final episode of Fringe being titled, "An Enemy of Fate" Walter finally succumbs to his destiny and with it apparently comes his absolution.  One could argue that Walter chose this path and that he accepted this future of his own volition.  He sought forgiveness and redemption and in the end it was his duty to take Michael into the future and right the wrongs that had been done over many timelines.  As far back as 2015 Walter had planned (along with September) to repair what he had wrought.  Freed from amber in the future Walter was able to kick start his effort to rid the world of the Observers and reset the timeline.

But then, the hand of Fate stepped in.

September was tragically (and unfairly) shot down and Walter was left with no choice but to take Michael forward.  Yes, he had no choice thus no free will.  Did the hand of God take over and propel Walter into the unknown?  Most of the religious allegory that was so prevalent in the past was absent here in these final episodes except for the White Tulip symbol.  But if God did act then once again, Walter did not act of his own volition and God had his sacrifice.

I'm a bit puzzled by all this so I am throwing this out to you all.  What happened to free will?  Doesn't it seem that Walter was fated to do this all along?  Especially if he sought redemption from a higher power and he actively changed his mind upon September's appeal?

What did I miss?  Walter's actions prevented the Observer invasion but followed the path we all thought he was doomed to tread.  What are your thoughts my friends of Fringe?  Do you have a different spin on all of this?  Am I being too cynical?  Let's hear your theory.

I'm going to tackle many topics that the Fringe finale left us with in the coming days.  That way I won't pile everything  into one Fringe mountain of laundry and we can keep the Fringe fires burning with open discussion as long as we can.