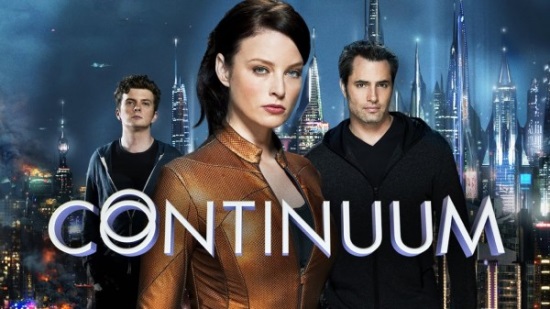 First up is the teaser for the final season of Continuum.  Continuum is the Rachel Nichols vehicle where her character, Kiera Cameron, was sent back in time to fix the timeline by the gentleman who broke it in the first place.  (An oversimplification but pretty much it.)

Let's take a look at the trailer.

Now there's a shocker.  Is Kiera really back to the future or we getting a little standard TV misdirection?

Raise your hand for misdirection.

That's okay, Kiera may in fact be back (although that's not how we left her) but, if true, she'll be sent right back to the past to fix what isn't  juuust right.

We catch quick glimpses of our favorite characters. 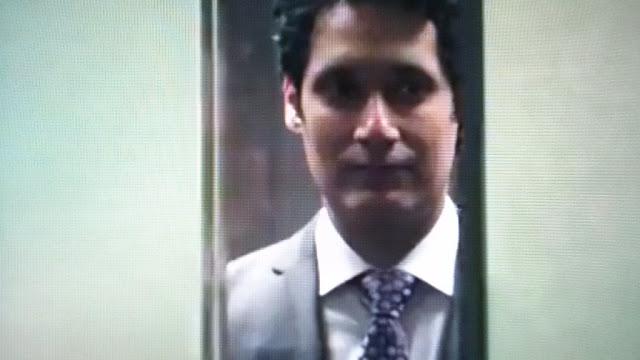 "The soldiers are here to create a better future."

So intones Matthew Kellog as the elevator closes the door on the discussion.  So Kellog knows all about the soldiers from the future.  As of last season finale these soldiers were just about to chase down Kiera and her new ally, Brad.    How involved is Kellogg in the mission of the soldiers?  Does he have a hand in directing them? 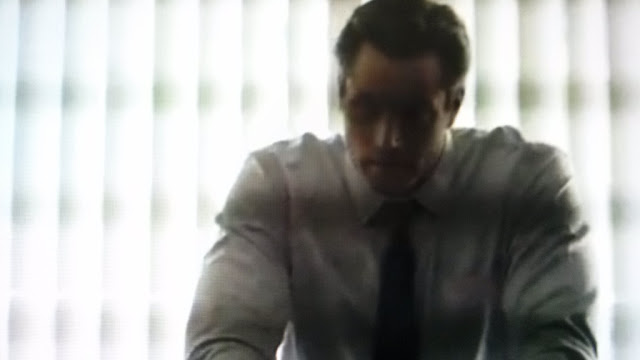 No spoken words from Kiera's partner.  He does slump his shoulders though.  Heavy hangs the head that wears the crown?  With Carlo's resignation the dapper look and the blinds behind him, Carlos seems to have new responsibilities.  From partner to Boss? 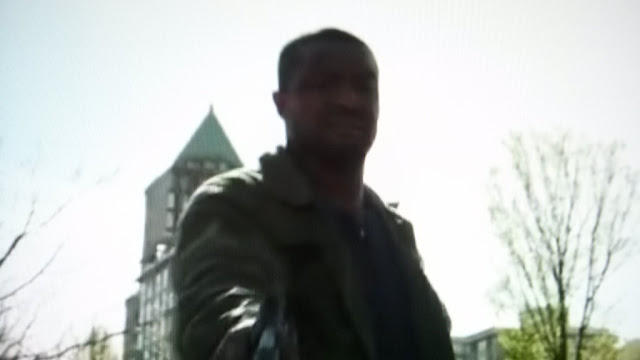 "Open your eyes to the truth."

Verta arrives, with gun naturally, ever the freedom fighter he seems to be warning Kiera.  How much does he know in this new time stream?  Still the henchman for Kegame? 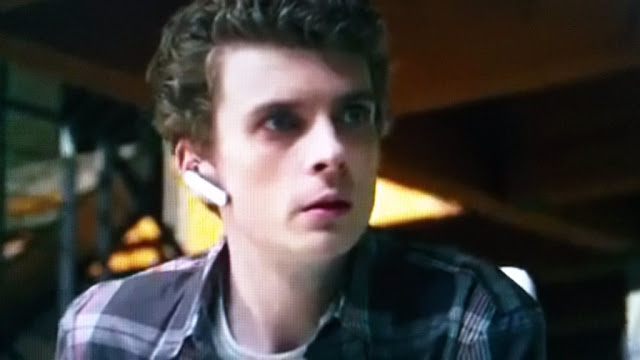 Along with Carlos, he had the best of plot lines last season.  How much does the future kingpin control the past? 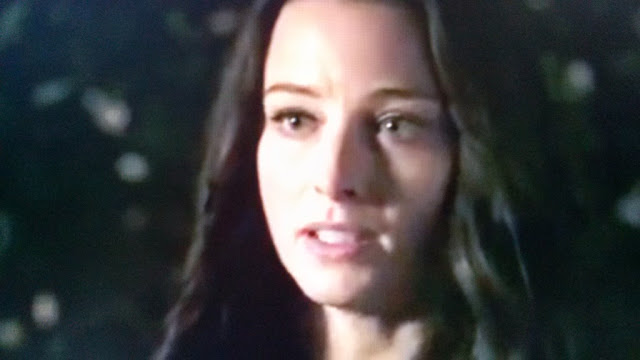 "It's time for me to focus on myself."

That sounds awfully selfish.  Her mission always was to return to her family.  But hasn't that future disappeared.  (Her husband was a creep anyway.)  Still, there is always her son.  That's a worthy goal.  Is she speaking to Alec?  How far can she push him this time.  He kind of went off the rails last season. 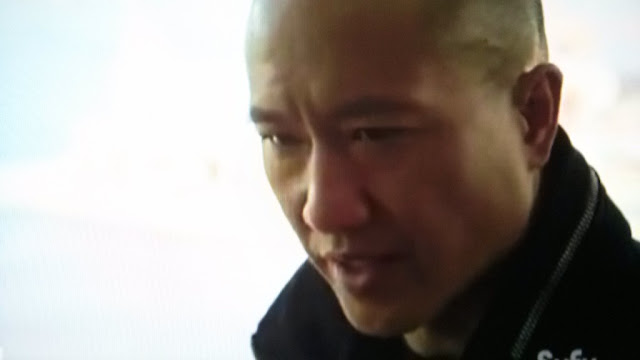 "Your destiny will catch up with you."

Destiny Curtis?  So you can't change time?  Methinks we can't quite trust him.  He's probably trying to protect his destiny. 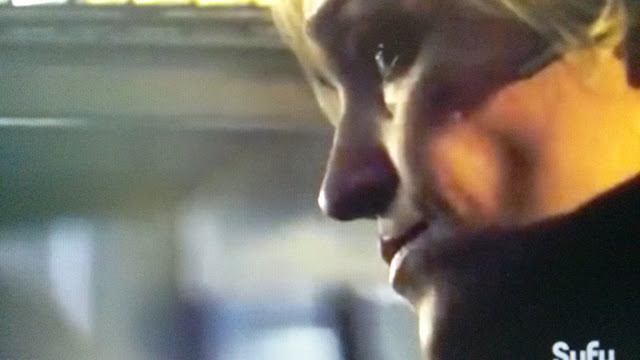 Garza is back in all her kick ass glory.  Her peace treaty with Kiera seems to be holding and the two of them make one of the most unstoppable duos on TV.


What is "it" they want to destroy?  Another time machine?  A soldier haven.  Kellog's yacht? 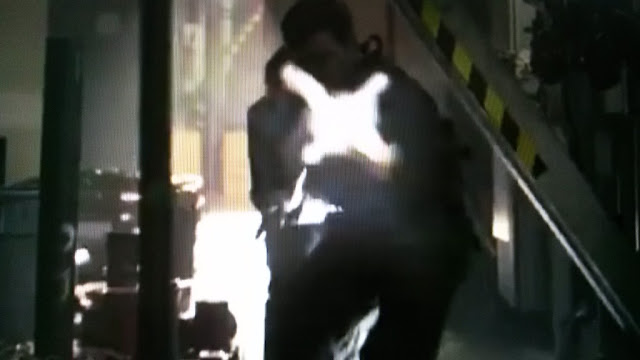 From here all Hell breaks loose and we get a lot of quick cuts including much gun play and plenty of Kiera action shots.

For some reason water plays a role ( a mechinism for time travel?) 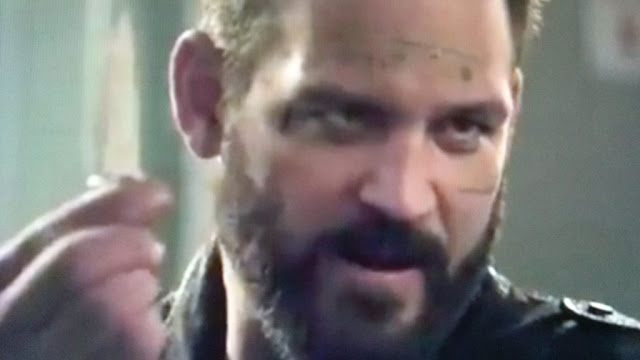 Brad finally shows up and he looks like he's primed for "surgery." 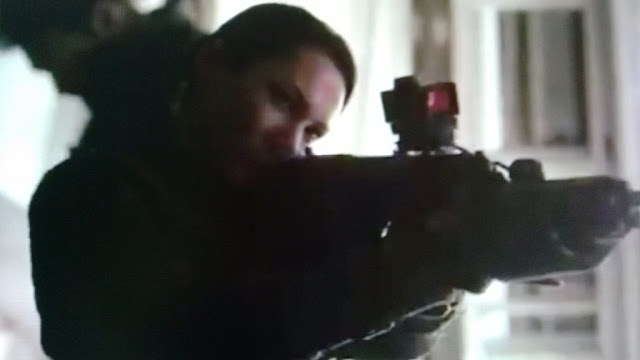 We get alook at a "future gun" and I say future gun because in the next frame Kiera seems to get zapped and all of time and space gets warped around her.  I'm not sure if that is Kiera in the frame above but it sure looks like Brad in the background.  Kiera wouldn't be shooting herself (would she?) and the two frames are only related by following each other in the teaser.  A TV type clue? 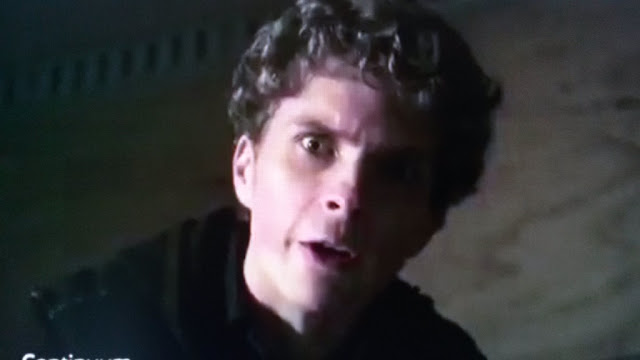 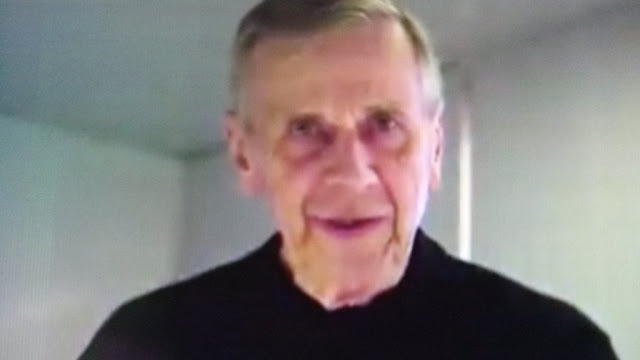 Then he dissolves into his older self and proclaims,

"You changed the past." 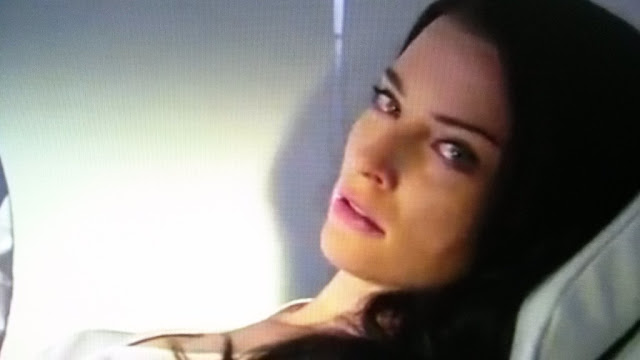 Hospital bed Kiera (as seen to start the teaser) rolls her head over seemingly in disbelief.  (I don't believe you either older Alec.) 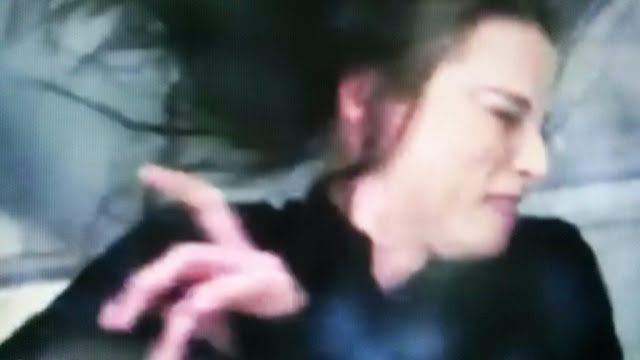 As the teaser closes, Kiera is shot by that time/space warping gun.

Well, we can't close on an up note can we? 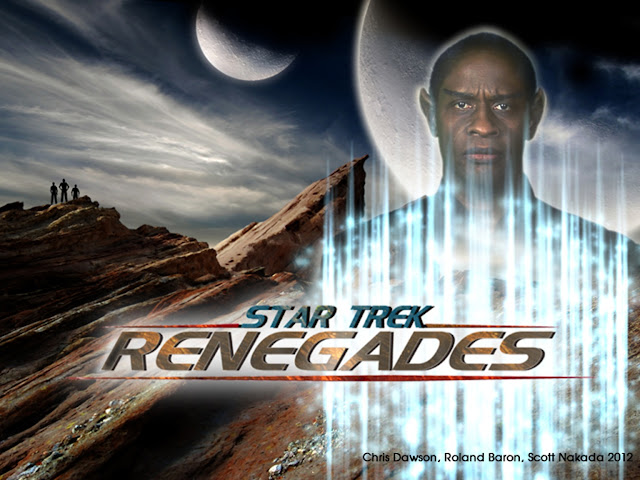 Everyone knows there is a new Star Trek coming out right?

Some of the dialog is cringe worthy and even a few seconds of the acting looks like its been delivered straight from the forest.

Let's take a look at some of our major players. 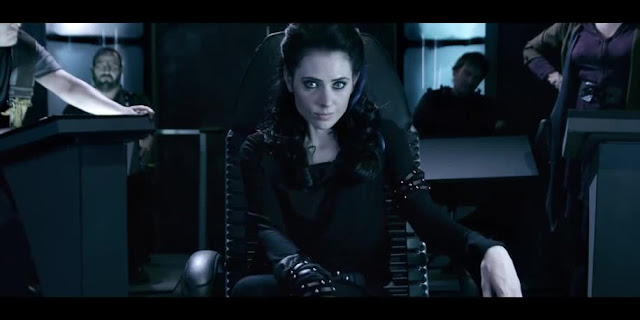 The titular star of the show, Adrienne plays a distant relative of Khan Noonian Singh.  (He had kids?)  Her lines are some of the cheesiest.  In response to being "hunted" she responds, "That's the way we like it."  Yikes, at least she didn't spit on the floor to add gravitas. 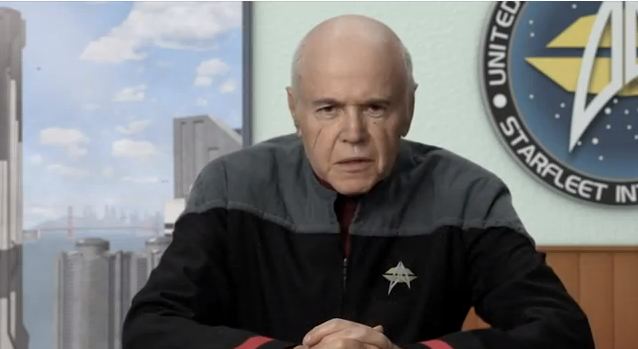 Leave the gravitas to Walter Koenig.  Looking a little worse for the wear, Koenig returns as Admiral Chekov.  He is 143 in the show so I guess we can cut him some slack.  Koenig seems to slip easily back into the role he's been playing for about 50 years.  Not bad. 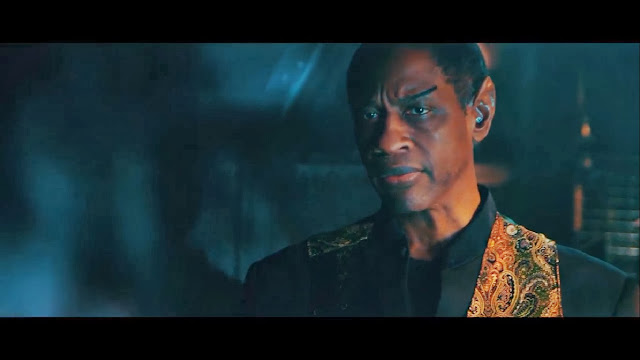 Perhaps the most convincing player in the trailer.  Tuvok is supposed to be wooden and Russ nails it.  Compliment intended. 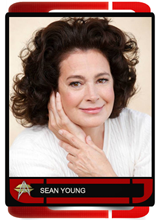 Yowsers!  I haven't seen her in a while.  That doesn't mean she hasn't been busy.  Check out her IMDB page.  No matter what she's done she'll always have Blade Runner on her resume.

Poor Ed never could catch fire from his terminator days.  Still has the street cred from that movie though.  He looks like a young James Spader here. 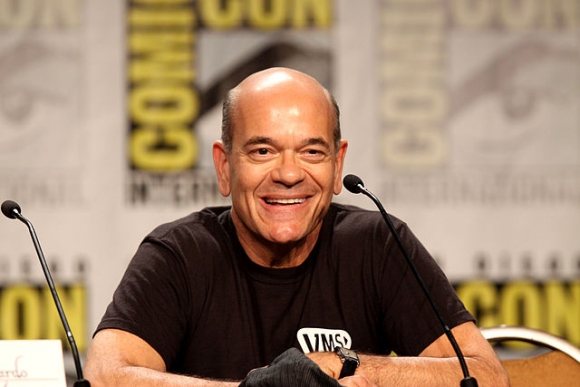 Looking good Doc! Picardo plays the original Dr. Zimmerman that was the creator/inspiration for the EMH or Emergency Medical Hologram on Voyager.

Don't they know there is a "Ragnar" on TV already?  Graham has appeared as a Vulcan on Star Trek before (Enterprise) and most notably he was in the classic, "Alien Nation."

This production hopes to catch on as a pilot in hopes of landing a place on network television.  What else does it have going for it aside from some notable names? 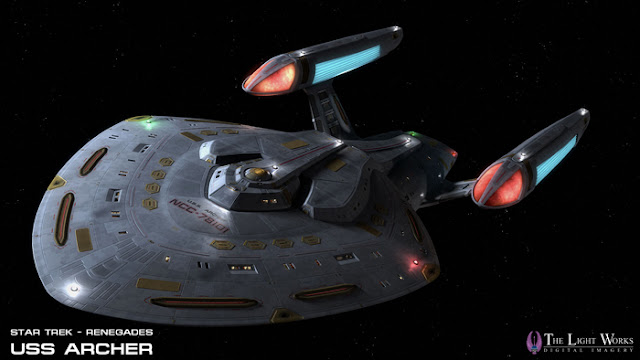 The spaceships are cool.  Checkout the USS Archer. 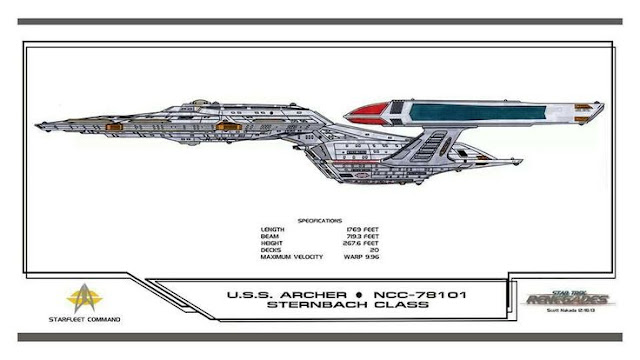 The "Icarus" is the one the Renegades will be tooling around in.  Seems to have a little Klingon and Cardassian in its bloodlines.  (The bridge looks totally Federation.) 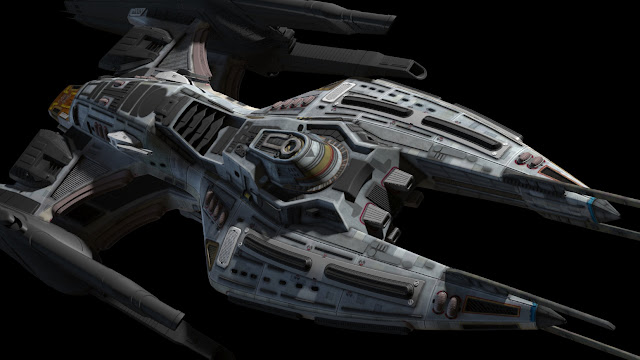 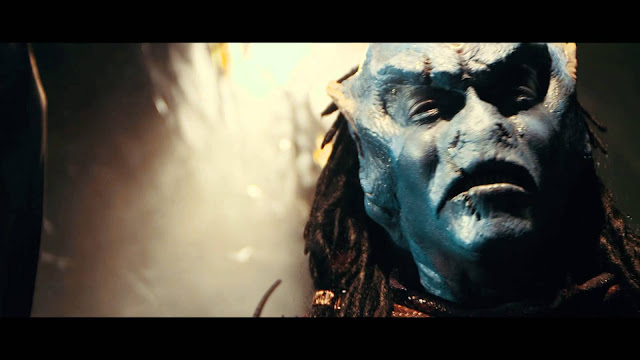 And the space battles seem to be pretty well done. 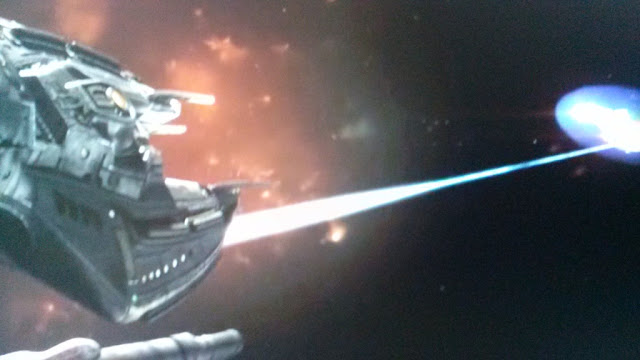 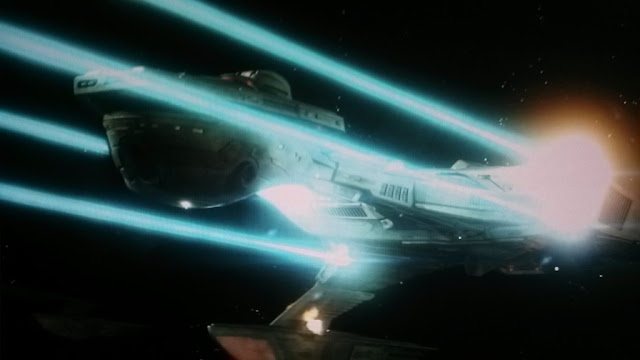 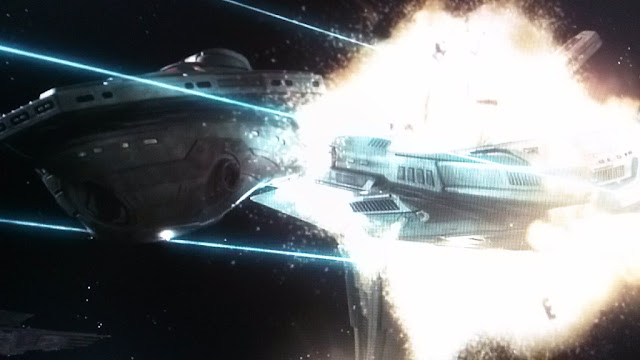 So all in all things may seem a little minor league but there is potential.  Especially if they manage to keep it action heavy.  Tim Russ and Walter Koenig have a passion for this, their second production, so that is a plus.

Word is Michael Dorn, aka, Worf is pushing for his own "Captain Worf" series so the more Star Trek the merrier.

It seems like a long way until Star Trek Beyond hits the big screen.  Enjoy what we have until then!