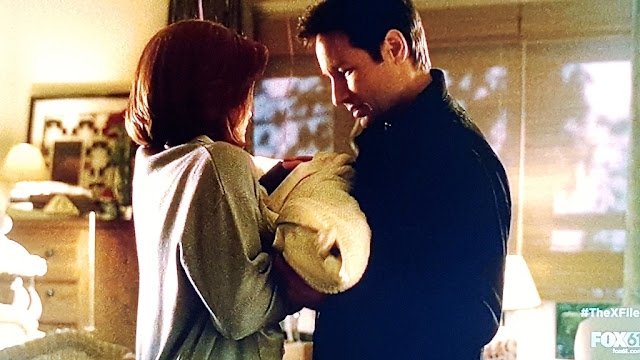 We are now two thirds through this X-Files revival and it is plainly evident this is not a collective tale of government conspiracies, alien abductions or monsters run amok.   It is the tale of a broken family. The "ghost" of young William, the progeny of both Mulder and Scully, continues to haunt our protagonists.  The depth of which we've only begun to scratch the surface of, but of which becomes more heart rendering with each passing episode.

What a fascinating tact by the X-Files creative team.

While many truly love what The X-Files has brought to the table in it's revival, many other have been apoplectic in it's direction.

I hope the finally get what is going on and don't fill themselves with so much bile that they miss this rare and  precious, I don't know, "gift" and fume off into the darkness like some garbage monster. Times change, people change.  We should rejoice in the decision to pick up where Mulder and Scully are in their lives.  If we were dropped into a wild melee where aliens are abducting people, cars are crashing, shots are being fired and the government is stonewalling the truth it would have been exciting but eminently forgettable.  (Turn on the evening news if you want that.)

Mulder and Scully have always been the heart and soul of this series.  Sure the paranoia and the paranormal have been fun.  But it has been through these two stalwarts that we have been able to pursue the fanciful,  fact check the ridiculous and embrace the sublime.

They are us and we are them.

The greatest mystery in life is life itself.  The eternal question of "why" will always face us. What better way to spend a Monday night than with two people who seek the same truths as us.

On to the episode.

Of Frankenstein, the Monster and William 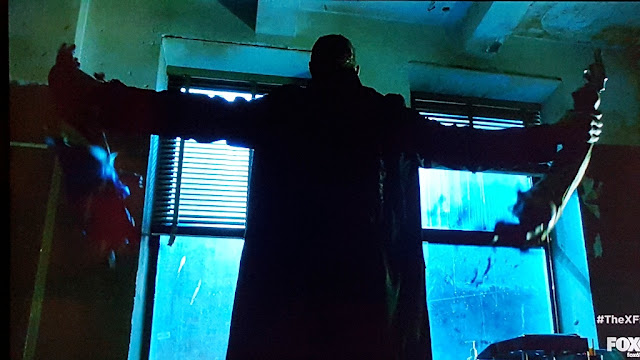 As this episode progressed I got the distinct feeling we were watching a tale of Dr. Frankenstein and his monster.  When Scully chastised the Trashman for not being responsible for his creation I knew we were "Home Again."

I took a class in college called "Horror story" and one of the books we had to read was "Frankenstein."  I loved it and the collective lesson we learned was to be responsible for our creations.  Be it, cars, guns, monsters or children.

That's the point Scully was trying to drive home.  You just can't create something and say, "Well, it's out there now, I can't help what it does."  You have to take ownership of it.  To make it your responsibility.

To see it through to the end like you would a child. 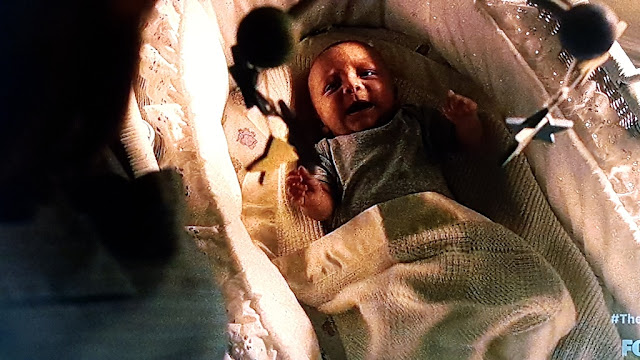 As discussed in many quarters and including this blog, Scully is wracked with guilt over having to send William away.  After being traumatized over losing her own mother and having Margaret call out to her lost son Charlie, it seems Scully is being pushed to the brink.

Quick hypothetical scenario!  Mulder and Scully's work will threaten to expose the Cabal and the Cigarette Smoking Man and his minions will capture young William and force Mulder and Scully to stop their work. 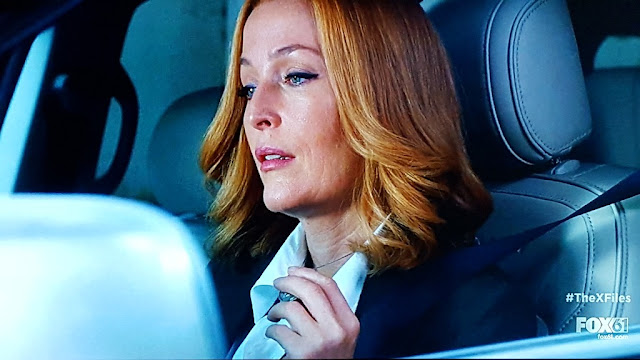 Another interesting tie in to the tale of Frankenstein and this episode is the feminist interpretation of Shelly's monster tale.

There are those who think Shelly's own real life tragedy help shape her classic novel.  Shelly's mother died giving birth to Shelly and sadly she also lost her own child when it was born prematurely.

The issues of guilt are nearly the same explored in "Home Again."

Post-natal depression has been factored in Shelly's work also.  Some think Shelly created the monster as a way of dispelling her guilt of losing her mother and her own child.  The monster is seen as some sort of "rejected child" in search of a family and only acts out because his need is so great.

Again, very similar to Scully's feeling about William.  One could say Scully is afraid her son will turn into a monster much like the Trashman's did because of his supposed abandonment or rejection.  (Plus there is the terror of him being an alien hybrid.) Whatever the outcome, I'm betting the story of William will prove to be the climatic end to this abridged season and leave the fandom begging for more. I have a theory about the Quarter and I have to admit it is pretty pedestrian.

If William is half of Mulder and Scully then wouldn't he be a quarter of his grandmother?  That's why she wore the quarter to remind her of him. 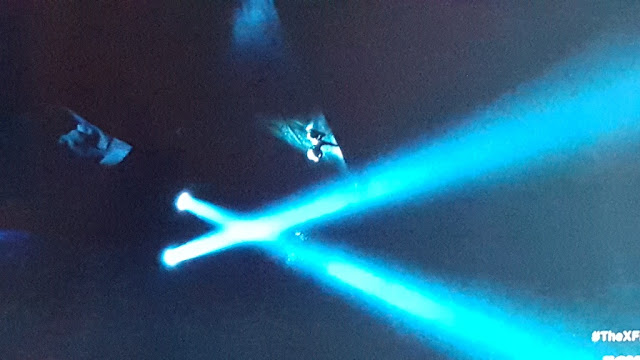 Loved director Glen Morgan's touch in the crossed flashlight beams forming the X as in X-Files. 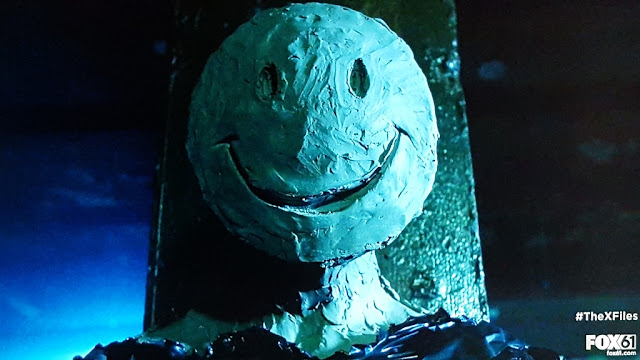 Anyone think putting a smiley face on the Tulku will change his murderous disposition? 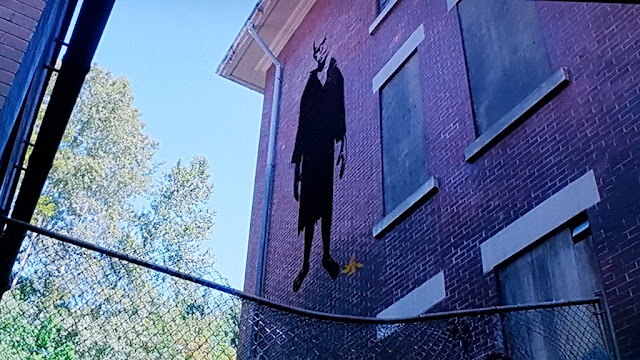 Especially after seeing the Tulku image mysteriously appear on the wall as the Trashman leaves his "studio" for good.

With cool efficiency Dana Scully takes down the hapless perp.  Hey, she said she needed to work.  I love way she hands the gun over to Mulder.  It's something they've done a hundred times and Mulder is so non-chalant when he intones, "We're here to see the Trashman."  Whatever you want FBI!

There was some light comedy too.

First we had Mulder telling the Philly cop the suspect couldn't have been a 76er because, "They can't even find the rim."

And there was the way Mulder and Scully walked into the crime scene. 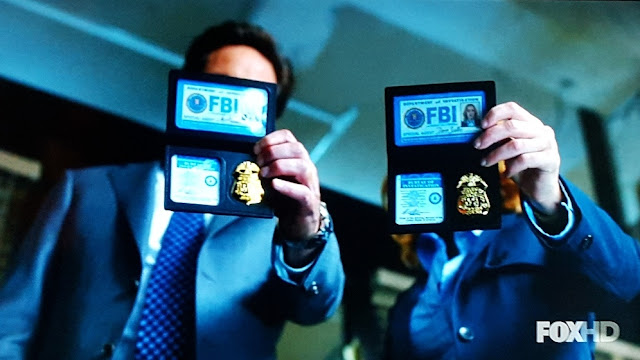 They reveal themselves to the befuddled forensic specialist in classic fashion. 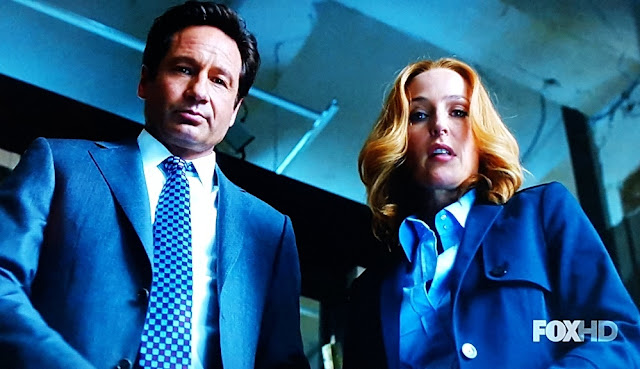 And then share a look when the detective asks them about their experience with all things, "Spooky." 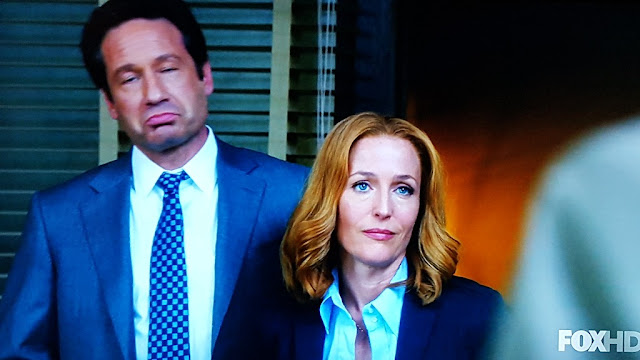 I can't believe people are down on this show. 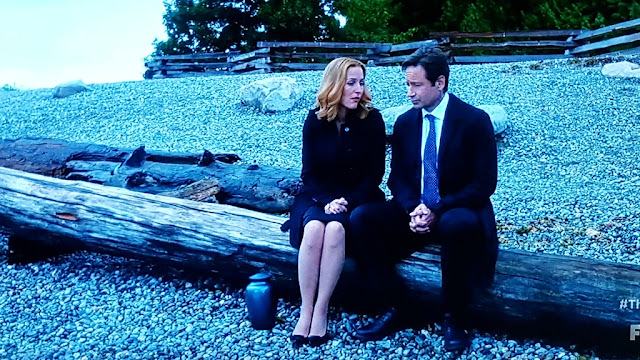 Finally, I got a real "Beyond the Sea" vibe from this episode especially as Mulder and Scully prepare to disperse her mother's ashes.  Beyond the Sea is when Scully finds out her father has died of a heart attack.  News received from her mother via a phone no less. The ship making it's way to the sea added to the effect. Mulder and Scully are left alone to ponder their plight.  Generations of their family disappear before them until the realize they are the family now.  What of their legacy?  What will they leave behind?