Stranger Things Season 2. There Be Monsters!

So what did everyone think of the big bad monster at the end of the "Stranger Things" season 2 Super Bowl teaser?

What you haven't seen it yet?  Okay, take a look while the rest of us get a refresher.

Poor Will, at the end of season one he was rescued but coughing up little squiggly things.  That's never good.  Now, not only is he putting his visions to paper (as seen in the teaser) but they are greeting him at the door.

But is it real?

The people behind Stranger Things have hinted at an invasion of sorts.  An inter-dimensional invasion?  The Upside Down world going upside right on us?  Or is it an invasion from another world that actually exists in our universe?

The latter would be a little disappointing.  I'm all for an alien invasion here and there but it's kind of been done to death.  Something from another dimension is much more refreshing.

If that can be said about the imminent doom of the world as we know it!

As I alluded to earlier, we don't even know if that Beastie at the door is just a vision, a bad dream or the real thing.

Which bring to mind the nature of the Upside Down world.   As you travel through it, much like many characters did in the first season, it seems to be a mirror image of the world they left behind.  Albeit, dark, depleted and very narrow in vision.  What mirror world would got to the trouble of creating an exact copy of ours only to leave it un-populated?  (i.e. Where did all the people go?)

That's when I came up with the theory that the Upside Down world is just a "Perception Bubble".  It exist as a bubble until someone steps into it and mentally recreates the world you've left behind.  Also, it only extends as far as you travel through it.

So how does the Demogorgon live there?  That's an excellent question. 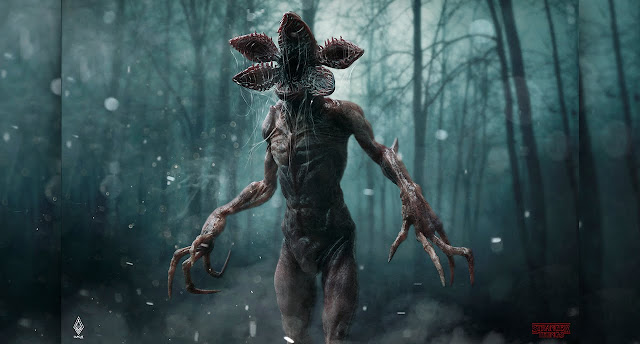 Let's go a little off the wall here.

If the world of the Demogrogon is a "Perception Bubble" then perhaps it a reality where our collective nightmares are made manifest.

That's right, our inner demons that haunt our dreams actually live in a world of their own and has been created through the strength of our dark collective imagination.

Monsters from the Id.  (See another take on that here.)

Now, those very same monsters that haunt our dreams threaten to walk among us in a very real way.

You may be asking yourselves, how can a living breathing monster be created through the power of our imagination?

I fall back on this, "Perception is reality."  Or, "Seeing is believing."  (Here is a primer on perception and reality from our good friends at Wikipedia.  Particularly, scroll down to the section about "Spatial representation.) 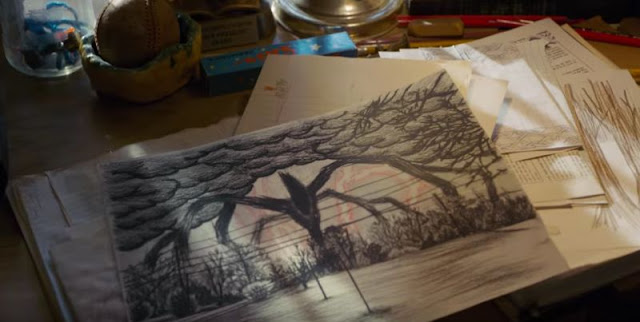 Maybe this is what the people behind Stranger Things is trying to explore.  It would be a terrific idea.  Do they have all the answers?  Do I?  Not really.  But it is worthy of exploration.  Imagine a world where our nightmares roam and now they can cross into the world we live in.

Hey, it's a TV show, you don't have to have answers for everything but at least explore some of the important questions we ask ourselves and run with it.

Or in the case of Stranger Things, run from it!

Lastly, about that Beastie that led off our little discussion.  I'm betting it's part of a dream.  But that doesn't mean it doesn't now exist on the other side.  Now that there is a real conduit to the Upside Down world thanks to the Hawkins Laboratory then maybe Will is acting as a beacon of sorts to attract the worst of our collective angst.  The Demogorgon may have focused on the sad and vulnerable like Will and Barb, now the rest of the Upside Down worlds denizens can follow it here where perhaps Will is part of both worlds.