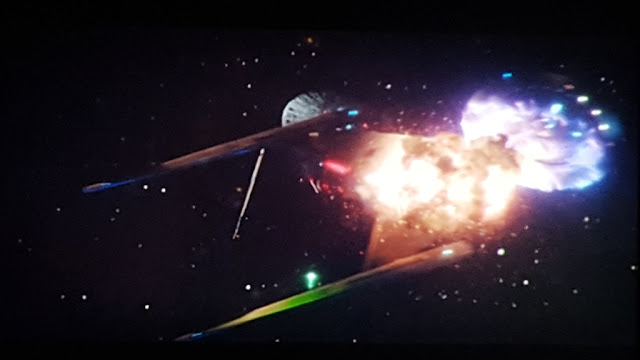 Things are about to go boom for Star Trek Discovery in a major way.

Thanks to the penultimate episode of Discovery's Fall season the fuse has been on several fronts and it looks like everything may go boom for the Fall finale.

Here are a few of the major plot points that may explode in the finale.


Let's take an in depth look.


The two implacable foes are about to go head to head with their most advanced warships.  It's arms race in space and we have the Spore Drive Discovery against the Cloaked Sarcophagus ship.

Discovery can appear anywhere in space and juke and jive like the best heavyweight boxer.  Kol's Klingon Cruiser can simply disappear and reappear anywhere in the ring to flatten it's foe.  It seems they are evenly matched and timing of the fatal blow may decide the champion.

We got a sneak peek from the episode 9 trailer of the Discovery above and behind Kol's ship unloading with phasers and then heading into Spore drive.  But, is that just a tease?  Trailers have a way of "warping" the truth.

There is a fundamental weakness in the Spore drive and we got a look at it in this episode.  It's the Stamets "interface".

Things are not going well for our happy go lucky/passive-aggressive engineer.  Being the physical interface to the Spore drive is starting to take it's toll. Stamets has gone from an advocate of love and understanding to someone who needs anger management.

As Cadet Tilly observed, "You're back to your old persnickety grumpy self".

In recent episodes, we've seen Stamets come to grips with living outside the normal time stream (Episode 7) to being blithely resigned to Discovery's destruction (Episode 6).  Now, as Tilly notes he seems to be struggling with his state of mind.  The physical demands of the drive are bad enough, now he seems psychologically impaired.  (As evidenced by the "promotion" for Cadet Tilly which we will get to shortly.)

What are the odds Stamets has a breakdown right when they need him most?  Pretty good I'd say. 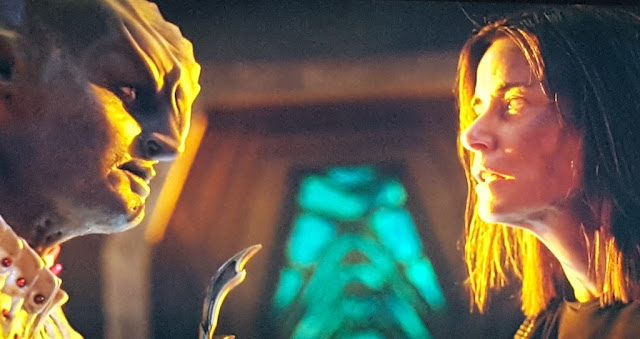 Okay, calling it an "impasse" is a major understatement.

When last seen together, Lorca had pulled a gun on his superior officer, lover and former analyst.  He deftly maneuvered her into what turned about to be a trap by the Klingons and then resisted mounting a rescue mission for her.

If Admiral "Kat" Cornwell wasn't so preoccupied with being tortured by the Klingons I bet she'd be hopping mad.

But, what's this?  An overture by L'Rell to defect to Starfleet as she is driven to despair over the loss of her comrades and the direction by the power hungry Kol.

Alas, Kol had smelled a rat and the brief avenue of escape for Kat closed quickly.  For a second there, I had visions of the Admiral escaping with L'Rell and landing their shuttle craft aboard the Discovery with Kat marching towards the Bridge to confront Lorca, phaser in hand. 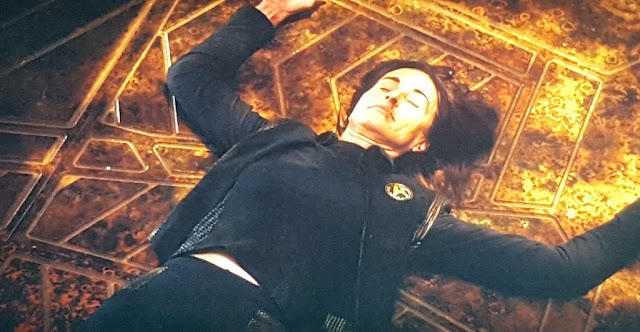 Instead, she finds herself still a prisoner of Kol and her lone ally gone.

Could things get worse?

Two things could happen.  Discovery could find itself delivering quite a beating to Kol's ship despite a probable incapacitation of Stamets.  If that's the case, Kol could reveal he has Kat a prisoner on board and sue for a truce lest he is forced to torture her horribly and more likely, kill her.

Lorca will be faced with the decision to rescue her or destroy the Sarcophagus ship with Kat along with it.  Remember, none of the crew know of his awful past aboard the Buran, save Tyler, and they certainly don't know he pulled a phaser on Kat and sent her into her immediate predicament.

Wanting to keep his secret safe, Lorca could lead a botched rescue mission of Kat wherein she "accidentally" dies in the effort or he just destroys the ship with her on it.  (And, yes, there will be a transporter malfunction of some sort also preventing a rescue of that type.)

I've made a prediction in the past of a botched rescue mission and this leads us to our last bombshell involving Burnham and Tyler.

Burnham and Tyler found a little time on the Pahvo planet for some personal recreation.  Their romance has found nary a blip on long range scanners and they are seemingly a good match.

Buuut, something could compromise this delicate arrangement in the form of Lorca's presumed botched rescue mission of Admiral Cornwell.  If they both bear witness to Lorca either sacrificing Kat along with Kol's ship, or worse, allowing her to be killed without doing anything to stop it.  Then the two will be forced to choose to provide either an alibi for Lorca or turn him in to Starfleet.

Tyler owes a lot to Lorca for saving his life and rapidly promoting him to positions of trust aboard the Discovery.  Burnham too owes Lorca for keeping her out of prison and making her a science specialist aboard the Bridge no less.

Should either them have to choose between their duty and Lorca it may put one or the other at odds with their erstwhile lover.

I'm thinking Tyler is a lot closer to Lorca than Burnham is and more willing to keep his secrets even to the point of covering up Kat's possible demise.  Burnham will then have to choose between her romantic partner and her duty towards Starfleet.

Will she choose mutiny against her captain again in such a short time?

There should be a cascade of "booms" no matter what she chooses!

If this is the Fall finale, what will the season finale be like?

It's a sign!  I'm telling you we are being set up for a future where Tilly will take the Captains chair.  In my recap of episode 6 I came up with the crackpot theory Tilly will one day be the Captain of the Discovery.  It will either be in the form of a flash forward or perhaps some time travel.  But, either way I am confident we will see it.

Maybe we will see the Discovery in some sort of crisis in this season where Tilly is the only one on the bridge and she'll have to take over in order to rescue the ship.

Captain Tilly, I see your future.

Wow, Airiam got to sit in the Captians chair.  When Lorca left the bridge he asked her to take the conn.  Nice.  Airiam has been alternately defined as part human part machine.  She's also been called an alien hybrid.

Here's actress Sarah Mitich as she normally appears.  I can imagine her audition where they asked if she'd like to join the series.  "Hell yes" would be the response.  "Good" they said, "This is what you'll look like." 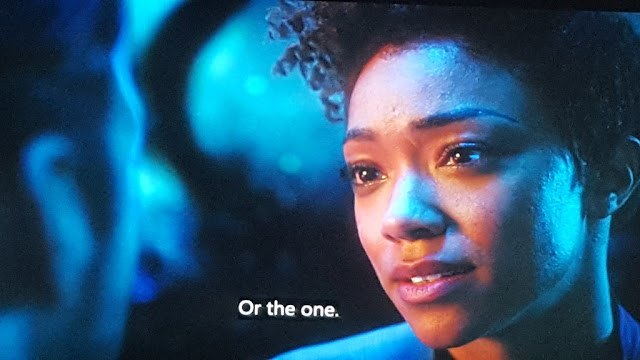 There were a lot of references to the original Star Trek series and the succeeding movies in this episode.  I was not a fan of how they lifted one of the most cherished quotes in Star Trek annals from Star Trek: The Wrath of Kahn.  Now, Spock's line with Kirk as he died is seen as a cliche borrowed from earlier generations and quite probably learned by Spock from Burnham. 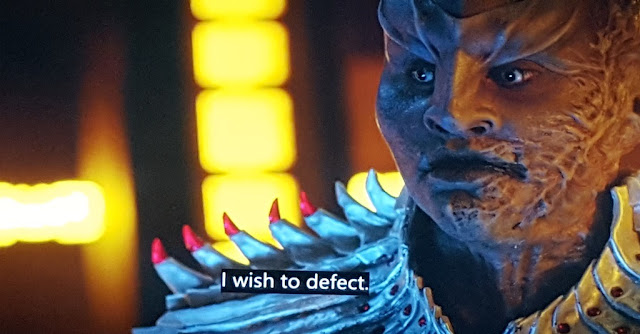 I at first thought this was a trick from L'Rell.  But now that she has seen the bodies of her dead comrades I believe it to be sincere.  Will Voq ride to the rescue of his friend? 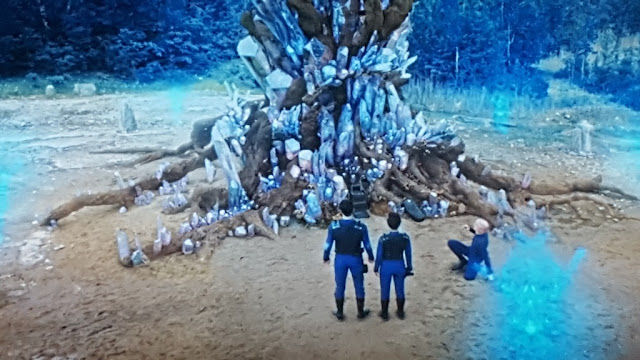 I know the Pahvo sent a message to the Klingons and Lorca seems to think they are playing both side against each other.  Or worse.  That wasn't my impression.   I thought the Pahvo had chosen the side of Starfleet and Discovery using their beam for detecting the Klingon ship at long range was a way of confirming it.  Perhaps they can't cloak at warp speed but they always seem to arrive that way.  We'll see.

I know this was a good Saru episode and I have given him short shrift here.  Sorry Doug Jones, next time!