Who Swings the Sword? An Avengers 4 Trailer Theory.

Okay, you don't see it.  But you hear it as the word "April" scrolls across the screen to close the video.  Better yet, it's the sound of a sword unsheathing (or sheathing) as it closes.

You may be saying to yourself, "Well that's just a cool sound added to the "April" notice to add a little menace.

Yes, completely plausible and quite probably correct.  But, what if it's not?

What if it is a clue?  A clue to an unknown force or hero that will make a surprise appearance in what may be the last Avengers movie.

Let's have a little fun and see who our chief sword swinging suspects from the Marvel universe may be. 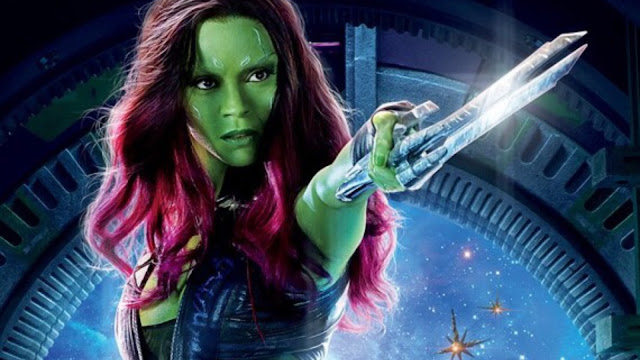 Not only should she be dead but she died at the hands of Thanos and not via the apocalyptic "Finger snap".  She landed at the base of a cliff at Vormir and is seemingly gone forever.  We're all assuming the Avengers will turn around the "Finger snap" but as mentioned, Gamora did not die that way.

But, since she did meet her end in the mystical realm of Vormir maybe there is some magic left to bring her back.  Besides, The Guardian's without Gamora?  Please.  Peter Quill without Gamora?  Double please.

The trick is bringing her back from the dead.  I can accept magic.  But time travel.  No way.  Too easy. 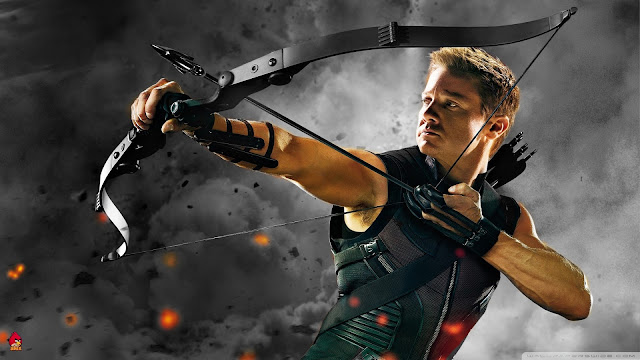 He's back baby.  And more importantly, swinging a sword in the trailer. 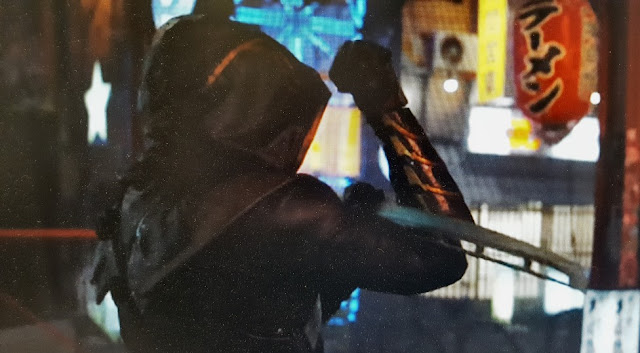 Completely MIA during Avengers 3, Hawkeye makes his return with a vengeance.  Something is definitely amiss though.   As if there wasn't enough dead in the world, Hawkeye is leaving a trail of bodies in his wake.  Has he snapped?  (To coin a phrase.)  What has led him on this murderous spree?  One would think he lost his entire family during the "Finger snap" and now, a broken man, he is out for blood.

How does this figure into Avengers 4?  Perhaps his discovery by Black Widow will lead him on the road to redemption.  His swinging of the sword may serve as a catalyst for saving the world we once knew.  Darker yet, he may have just one swing left that ends this apocalypse but costs him dearly.

Let's go a little out there... 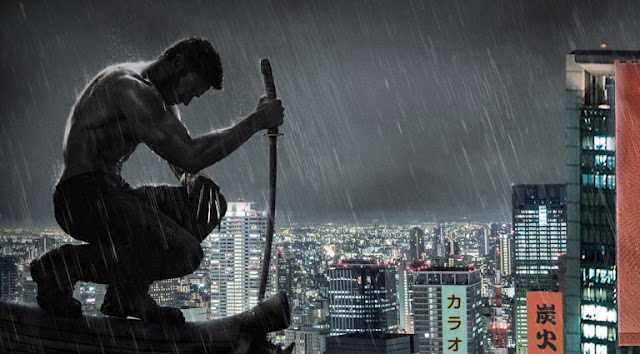 What better way to introduce the X-Men to the Disney/Marvel cinematic universe.  Can you imagine the reaction to this little nugget?  A new type of "Finger snap" as fan-boys collapse across the continent and the world in general.

I could hazard a guess that Natasha is on a mission to Tokyo to investigate a rash of killings. There, she finds Clint Barton as "Ronin"hacking his way through the criminal underworld on his own mission to find Wolverine.  Has he been hired by the Yakuza to stop Wolverine in his tracks?  Or, is the other way around? 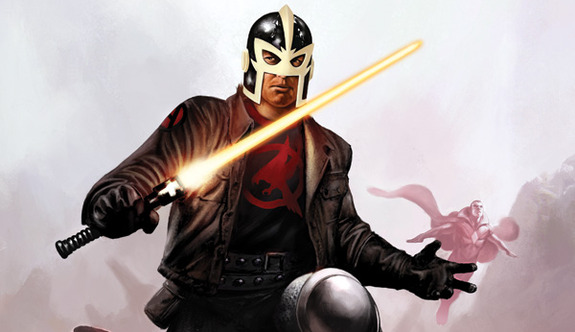 Dane Whitman, aka, Black Knight not only has a history with the Avengers but has been on the Defenders too.  So, this means he has a history with Doctor Strange and since the good Doctor told everyone "this is the only way" in Avengers 3 (or something like that) perhaps Strange had a vision of Whitman entering the fray.

This would be a real curve ball.  It wouldn't be as exciting as Wolverine but it would open a whole cinematic wing to the Marvel universe and usher in a new cast of characters.  Did anyone say "Phase Three"?

Even I have my doubts about this one.  Swords?  Check.  Marvel character?  Check.  X-Men related?  Check.  Appearing in Avengers 4?  Uncheck.  I doubt it.  He has his own successful franchise I can't see Wade Wilson stealing the spotlight from this important movie.  Ta Ta! 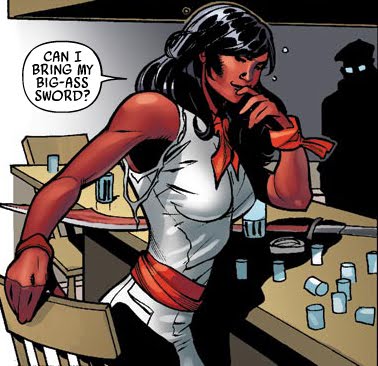 Lady, you can bring anything you want.  Besides, who's going to stop you?

Of course Betty Ross should be in an Avengers movie.  Bruce Banner could use a love interest.  (Sorry Natasha.)  "Thunderbolt" Ross would be extremely pissed (always a good thing) and her relationship with the Avengers via The Hulk is a natural fit.

As Marvel has pointed out on numerous occasions, it's not all about the guys.  If you want to expand your cinematic universe, then introduce another female character with close ties to the current cast.  Win, win.  The only downside to this argument is Joe Russo said she is "Gone" post Finger snap. 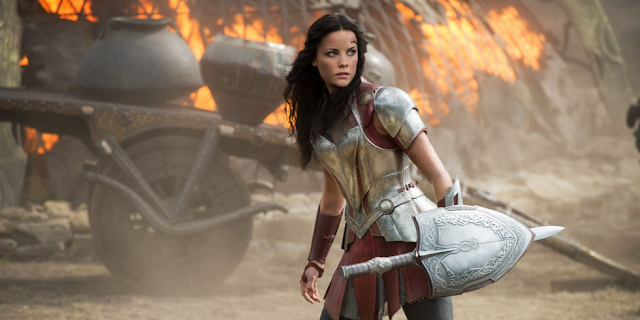 I'd love to have Jaimie Alexander back.  Sadly absent from Thor Ragnarok because of scheduling conflicts how about she makes her triumphant return here?  Much like Ant Man's absence from Avengers 3, perhaps Sif had other things to do.  Like, um, finding Captain Marvel!

Yes, Nick Fury sent the message via Beeper to bring Carol Danvers back but can you think of a better scenario than these two kick-ass ladies teaming up in space and returning to Earth in dramatic triumph.

That would be hard to beat.

Well, Thor has swung a sword in the past but he is all ready in the movie so not much drama there.  (Unless, this time he actually does manage to decapitate Thanos.) 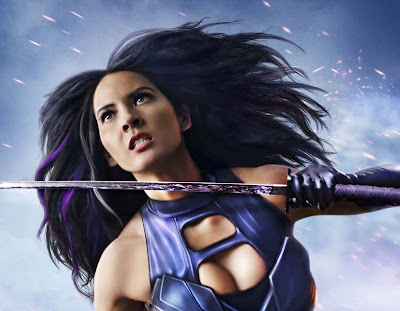 Psylocke?  Do you think we could convince Olivia Munn to climb back into that skimpy outfit?  (I'm sure there are some that would applaud it.) Not much dramatic impact here and not exactly a major character so I doubt it.

Magik with her Soul Sword?

Talk about skimpy outfits.  A powerful personage but not exactly central to the plot.  I'd love to see her but probably not.  (It would expand the female universe though!) 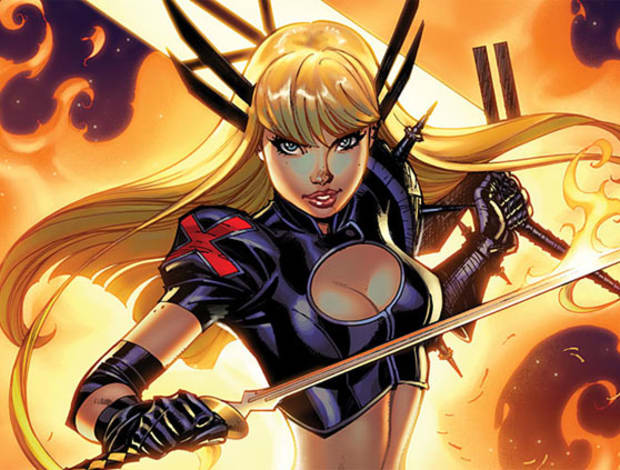 Magik will enter the X-Men cinematic universe next year (Anya Taylor Joy of "The Witch") with Fox's "New Mutants" so that does make a connection to the overall universe just not with the same impact of, let's say, Wolverine.

A cameo wouldn't rate a trailer tease either. 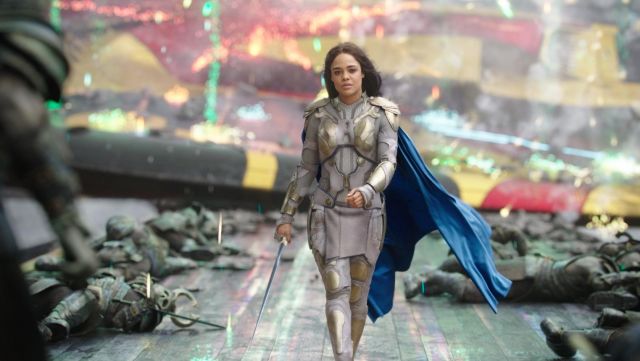 Is it her sword we hear to end the trailer?

Joe Russo confirmed Valkyrie did not succumb to the "Finger snap".  I have to say, Thor looks pretty morose during this trailer.  Maybe the return of a fellow Asgardian warrior would lift his spirits.

Hardly the thing trailer teases are made of though.

You'll note I didn't include many of the evil doers here.  I think we can pretty much agree the bad guys carried the day in the last Avengers movie and this one will be all about the triumph of heroes. If this is indeed the last Avengers movie, Marvel, Feige and the Russo's would want to keep the focus on the good guys.

So, there you have it.  A quick look at those who carry the sword for good.  Does it figure into Avengers 4 or am I reaching for straws here?

Well, if the Russo's wanted to include a little Christian mysticism there is this passage from Romans13:4...

"For he is God’s servant for your good. But if you do wrong, be afraid, for he does not bear the sword in vain. For he is the servant of God, an avenger who carries out God’s wrath on the wrongdoer."

That's from the English standard version of the Bible and, yes, it really says "Avenger".