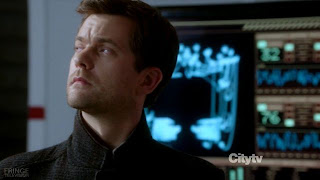 When I heard Peter remark to Lincoln Lee, "Strange days" I started thinking to myself, "Oh, cool another Doors reference".  So I began to sing along in my head as the show wound down, "Strange days indeed, most peculiar Mama, whoa!"  The show ended I'm still singing to myself when I realized I wasn't singing the Door lyrics but something from John Lennon instead.

The lyrics I was singing come from Lennon's "Nobody Told Me".  Here's a sampling.

If there can be zeppelins flying over New York in the Red universe, what's a few UFO's over the Big Apple on the Blue side?  In case you were wondering if there were any Fringe like references from the Doors' Strange Days here's another sampling.

I bet the people of Westfield VT. were thinking the same thing after David Robert Jones reduced their town to just a few square yards 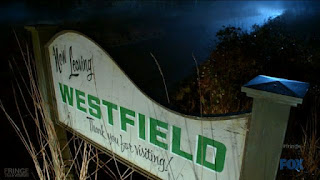 As a movie buff there was another relation to strange days and that was a movie by the same name. 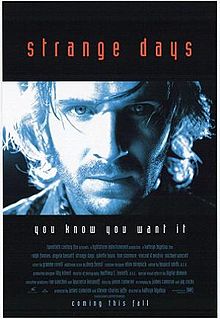 I've seen it and it is a bit strange indeed.  It was a movie by Kathryn Bigelow with an assist from James Cameron.  The movie was critically well received but was a box office flop.  Bigelow went on to bigger and better things with "The Hurt Locker" and Cameron, of course, had Titanic and Avatar.  Ralph Fiennes must be a favorite of Bigelow's as he was in Strange Days and The Hurt Locker.  The movies theme dealt with a dystopian future which is very Fringe like and even involved so called "Squid" devices that allowed the wearer to experience whatever the device had in its memory.  Like a murder.  I know Walter likes to "experiment" but I don't see him getting a thrill over experiencing someone else's death. 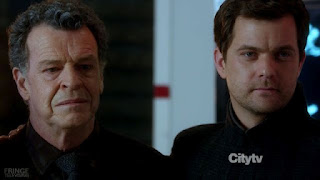 You know, it could very well be that Peter's intent was to not give us a pop culture seminar but a clue to next week's episode.  I'm thinking with the two part "Brave New World" we will see some strange days indeed.  Hmmm, I wonder if Peter is a Shakespeare fan?