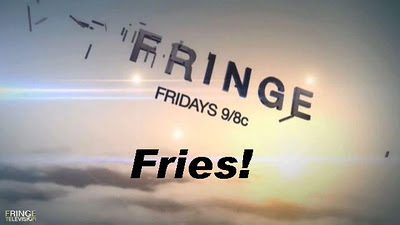 Fringe Fries, those tasty morsels, Easter eggs, clues and homages that make Fringe so great.
Let me get to something I wanted to examine on Fringe that has been much discussed by the Fringe fandom this season.  Where exactly are they in the grand scheme of the Universe or Universes?  Many have noted that when they activate the "Closed Captioning" during Fringe that they see "Walternate" when Walter speaks and this leads them to believe that the setting is actually much diffrent than we assume it to be.  I offer this as evidence to the contrary. 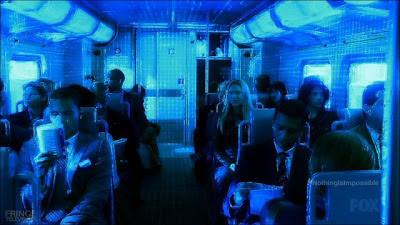 It's the "Observers eye view" that Peter now possesses.  Note that is in surrealist high tech Matrix like blue.  I'm thinking that if we were really in the other Universe the Observers would see everything in red.  Right?  Our universe is blue shifted and resonates in a different frequency. We all know the Red universe is colored differently and sings to a different tune.  Not a lot to go on but a reasonable theory. 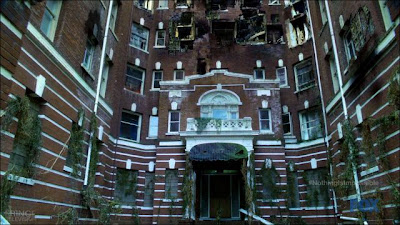 I actually paid a visit to the real 167 Cedar St. in Worcester Mass. where Walter's "Looking Glass"episode takes place.  Check out my amazing discovery at the Fringe Podcast blog. 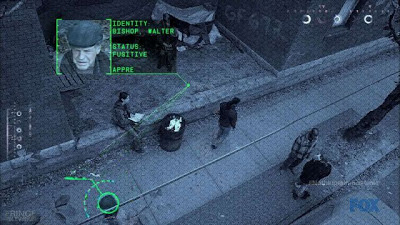 Anybody else get the "Person of Interest" tie in during this last episode?  In, "POI" the "Machine" is always tracking people looking for the next victim or "number" to identify.  As we see in the above image it is remarkably similar to what we get in an actual "POI" episode noted in the below image. 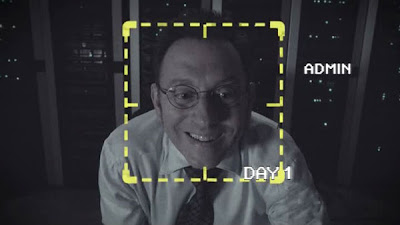 Both shows exist in the "Bad Robot" & "JJ Abrams" universe. 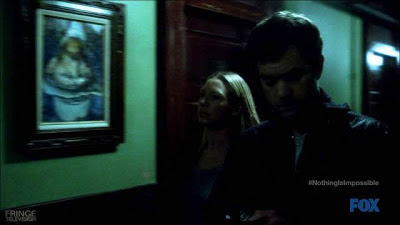 I thought I spotted a lot of works by impressionist painters and other masters along the strange hallways of 167 Cedar St.  and I wondered if there was any meaning to them all.  Then Peter and Liv walked by the the inverted self portrait of Vincent van Gogh.  That sealed it for me.  Here's how Wikipedia defines Expressionism...

"Impressionist painting characteristics include relatively small, thin, yet visible brush strokes, open composition, emphasis on accurate depiction of light in its changing qualities (often accentuating the effects of the passage of time), common, ordinary subject matter, inclusion of movement as a crucial element of human perception and experience, and unusual visual angles."
There's no doubt in my mind that the set designers of this Fringe episode wanted us to connect the "depictions of light" and it's "changing qualities" along with "movement" and "visual angles" that are so profound in Impressionism to this particular other worldly episode. 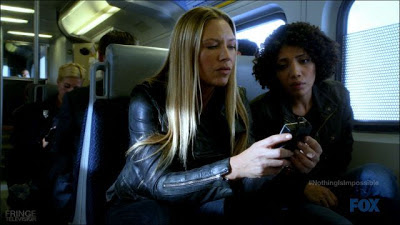 I have been wracking my brain over the transistor radio that Olivia holds in the above picture.  I know I've seen it elsewhere fairly recently but I can't figure out where.  Was it from the TV show Lost?  I bet one of you can tell me.

The thing about the radio is that it doesn't seem to work and is stuck to one frequency as Olivia noted.  Here's a thought, what if the frequency doesn't lead them to a certain location but to a certain time?  That's right, Donald has moved the "Inner Child" in time so the Observers wouldn't find him.  This also reminds me of the 2000 film "Frequency" starring Dennis Quaid and Jim Caviezel. 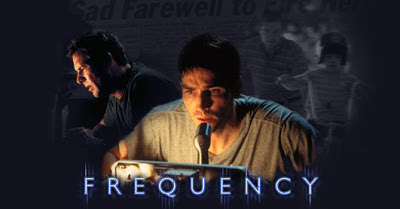 In the movie, Quaid and Caviezel play father and son that communicate with each other over short wave radio and through time.  Maybe the Fringe team will be able to pick up a transmission from the past or future so they can locate the boy.  (Also, Caviezel now stars in "Person of Interest.")

Then again, since we were speaking of frequencies earlier and the Red Universe, maybe Donald secreted the boy in the other universe and Altlivia and Lincoln Lee are taking care of him.  That would be cool!  For those of you that miss Seth Gabel he will be in an episode of "Arrow" soon and he will be "Count Vertigo".  Check out that news at ScienceFiction.com