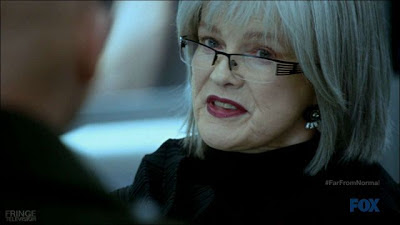 As we inch closer to the resolution of the great mysteries of Fringe let's take pause to remember the passing of Nina Sharp.  I titled this blog post as Nina's moment of triumph for that is what it really amounted to.  Yes, she had to sacrifice herself; but she did in a moment of the utmost courage. 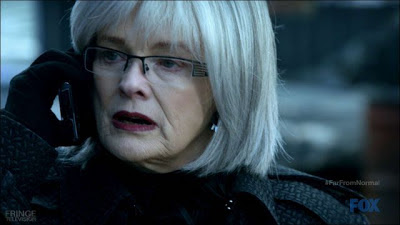 Before we continue along that line, we must also consider this episode as a triumph for the actress Blair Brown.  When Nina recieved the news that she had been comprimised there was that moment of shock followed by sad resignation. 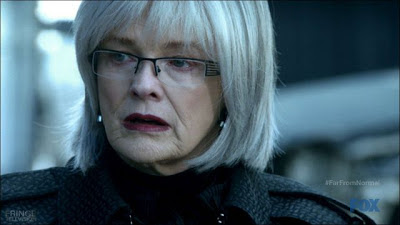 Blair Brown took this short but dramatic interlude to reveal the heartbreak that Nina was feeling.  The look of deep sorrow was painted across the canvas of her face and no words were needed for us to know that the end was near. 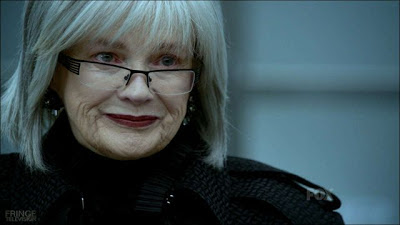 Astonishingly enough, Blair Brown as Nina, turned that moment of the deepest pain to put on a brave face for Michael.  The half smile, despite the red rimmed eyes, emoted hope for Michael that everything would be all right.  It was a tour-de-force by Blair Brown no doubt to go unrecognized by the Emmy Awards as is their custom.  But to the fandom of Fringe it marks one of the great moments of courage we've seen repeatedly this season. 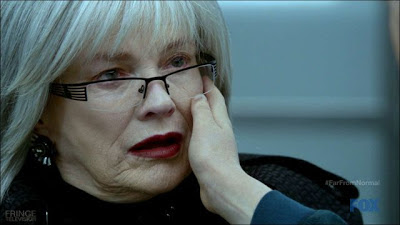 Nina was rewarded for her bravery by Michael as he reached out and touched Nina and shared the innermost thoughts that were no doubt shared with Walter at the end of the episode.  At this moment, Nina became aware of events that encompassed the entire history of Fringe and perhaps the love and importance she meant to everyone.  It was a just reward as it no doubt emboldened her in her upcoming face off with Windmark. 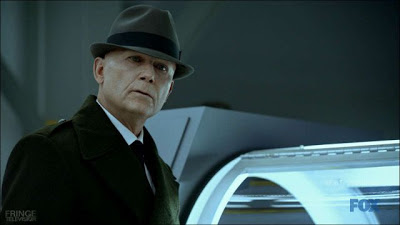 Windmark had Nina trapped in the "Black Lab" and as he discovered the experimentation on his fellow Observers he remarked to Nina, "You animals".  If I can take a brief moment here, this was a revelatory moment in Fringe mythology.  It was either Peter or Walter that had asked Windmark much earlier in the season what he had done to draw such a lousy assignment of policing humanity.  He answered, "I like animals."  Simply put, it would take one to know one.  If Windmark considers Nina and her team as animals then perhaps it is because he's been through similar circumstances.  I'm thinking that the Observers would transport people to the future where they would experiment on them and quite possibly re-engineer them to the Observer race we know today.  I'm guessing Windmark was in charge of the re-engineering or at least the part of capturing and herding the people to the future for their genetic manipulation.

Here is where Nina had her moment of triumph.  Not only was she emboldened to stand face to face with Windmark but to turn the tables on his supposed superiority.  Nina expertly threw Windmark's callous accusations by explaining the "head tilt" the Observers are known for as one of their quirks.

She noted that it was a basic instinct by animals such as the Lizard to enhance their hearing capabilities by focusing the sound waves to the focal point of their ears.   Lizards have been around for thousands of years and their brains have barely progressed in that time they can't even dream.  In that swift stroke Nina had revealed to Windmark how much less than human he and the Observers had become .  It was masterful. 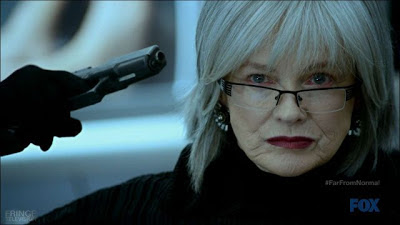 It only bought Nina so much time however.  But in that valued time she successfully parried all of Windmarks accusations and managed to keep secret the location of Michael.  Another superb moment for Nina.  Sadly, she had to end that moment there as time was running out before Windmark could dig deeper. Nina had bought the Fringe team and the resistance the time they needed to fight on and to reveal the biggest secret of this season so far, the identity of Donald as I had spelled out in my blog post, "The Variable". 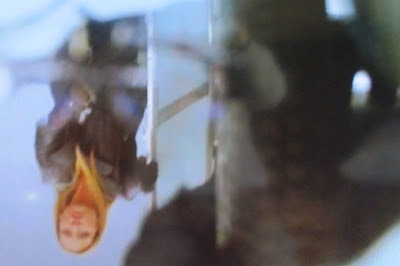 In a heart wrenching moment, the first to discover Nina was Olivia.  It was if if Olivia could sense Nina's fate much like she seemed to sense where Michael was hiding later.  This moment of sad realization was reflected in a pool of blood as Olivia approached the lifeless body of the person who was once a mother figure to her.  This was a truly outstanding cinematic touch by director Jeffery Hunt and it may go down as the best. 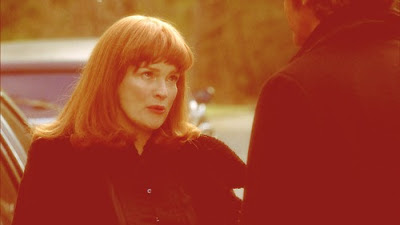 This ending also acts as a coda for Nina Sharp.   We can now look back at Nina's role in Fringe as a good one.  There were many times we all wondered if Nina was truly good or selfish and mercenary.  The answer is Nina's heart has always been in the right place.  This she proved with her final act. 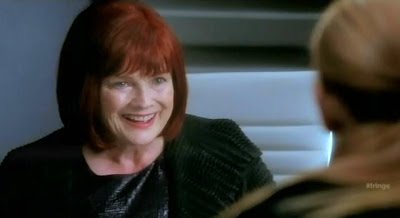 Rest in peace Nina Sharp your sacrifice will not go unavenged.