Do you think things will come full circle for Continuum? 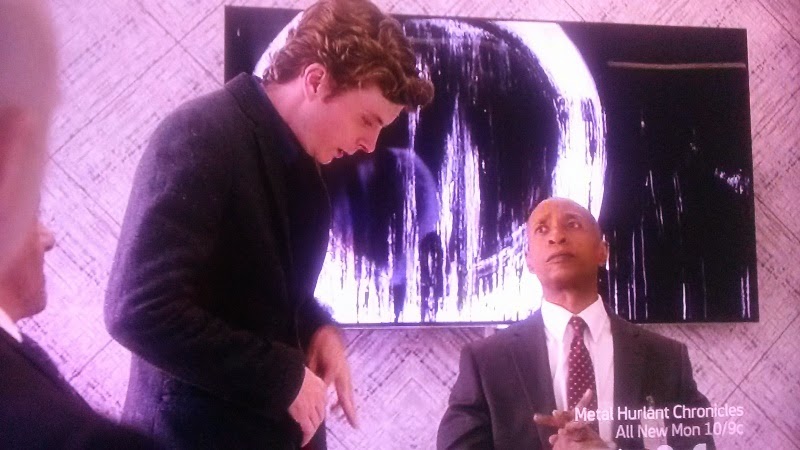 Poor Alec, his big moment before the board and, well, they're bored.

It's not easy being a boy genius and it's not easy having a major corporation dumped in your lap.  Oh, and lest we forget, it's not easy when there are two of you running around.

Alec Sadler is having an identity crisis and it is in large part because of his own machinations.  I was actually intrigued and inspired to write this blog post because of the unique wall hanging in the board room.  I think this is at least the third episode in a row where we've seen such art work.  It seems to be a favorite of Alec's father, Stan Escher, and it was the last thing he saw before he died.  (I did some writing about it here.)

To me, the message is things will be coming full circle.

This can take on quite a few meanings.  First of all I have the distinct impression Escher will be back.  Call it a gut feeling.  Why stare at all these circles and have them hanging everywhere in less you feel, "what comes around goes around."  Let me take you back to when Escher was shot.  He knew who Kellog was and it seemed almost preternatural.  Of course if he was capable of time travel he should know everything, first and foremost the things Kellog is capable of.  Yet he made no move to escape Kellog's trap.  Seconds later Emily shot him dead. 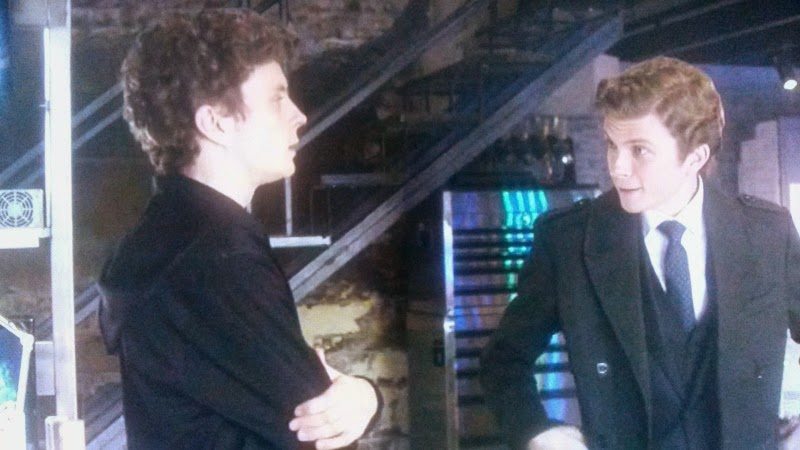 But let's get back to Alec and his "identity crisis."  The crisis being when your present self runs into your future self.  Alec should have known he could not outsmart himself.  I'll have to admit I thought they'd drag this little "tete a tete" a little while longer.  It was refreshing to see the Alec face off happen so soon.  It certainly ramps up the stakes.

Whom do we sympathize with?  The gallant ragged Alec that launched himself in time to save Emily or the abandoned and distrustful Alec that sees betrayal around every corner?

Present corporate Alec is privy to a lot more information about Emily than future Alec was.  As I said earlier, he also has a lot thrown on his plate.   Add to this he has a shark circling him in the form of Kellog but seems to have thrown in with corporate evil doer/lackey, Inspector Dillon.

This also begs an interesting question, what about the third Alec in the room?

The third Alec being elder Alec of the deep future.  I've always thought he was pretty much responsible for sending Keira back to fix the problems that were of his making.  Regret runs deep.  But wait a minute, now that Keira has come back from the future and Alec has returned as his ragged self then isn't he or both of them responsible for the corporate Alec that is now fast tracking elder Alec's grim future? 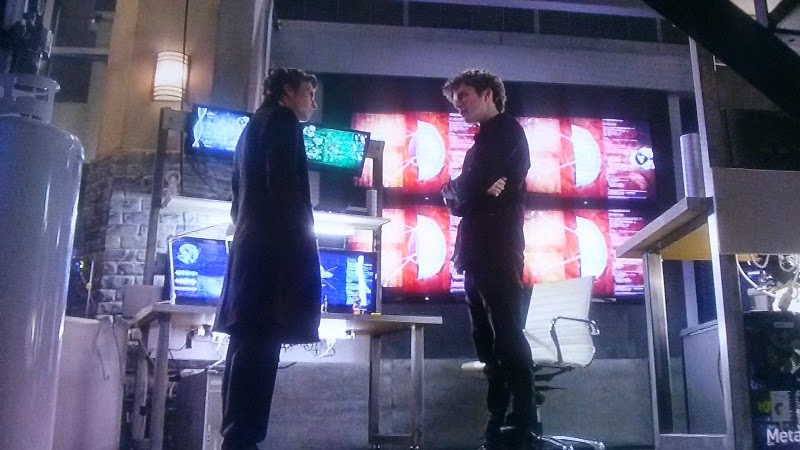 It's easy to like humble future Alec.  He's a bit of a mess, literally and figuratively.  He's in love and he went as far as to change the past to protect that love.  As we learned Emily has "chosen" him also.  But whoopsy,  therein lies a big problem. I'm pretty sure future Alec (not deep future Alec) doesn't know Emily shot his father.  (Ok, maybe deep future Alec too.)

That could present a problem.

I have a feeling both Alec's would react negatively to that information.  But who's to tell?  Well, for one it could be Kellog if his shark tank tactics don't work.  For another?  How about future Escher?

"Hello son, I've missed you, guess who shot me."

Geez Alec, you really have an identity problem.  You not only ruined Keira's future but your own also.

Is anyone thinking one of these guys has got to go?  Who decides that?  Kellog?  Keira?  Escher? Gulp, Emily?

The Other Identity Crisis 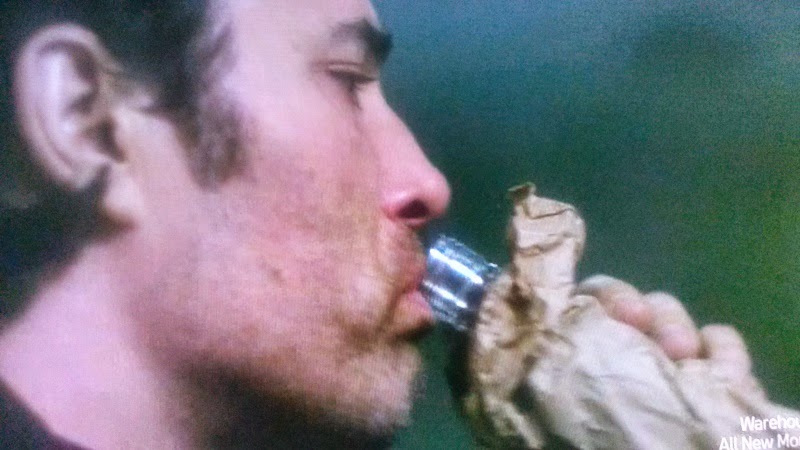 Oh man, this one really bothers me.  Poor Carlos.  It was bad enough to dump the whole time travel thing in his lap but he recently (re)discovered Betty as a traitor.  That's not the worst though, the worst is the picture that follows. 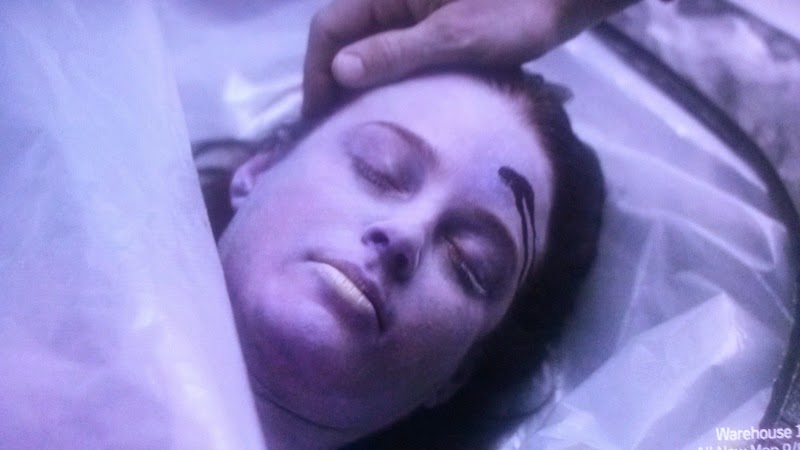 See where I'm going with this?

Carlos has turned to the bottle as he has found it increasingly difficult to resolve the death of the one person he thought he could trust.  No matter how many times new recipe Keira has told him it's the same old her, he is not buying it. 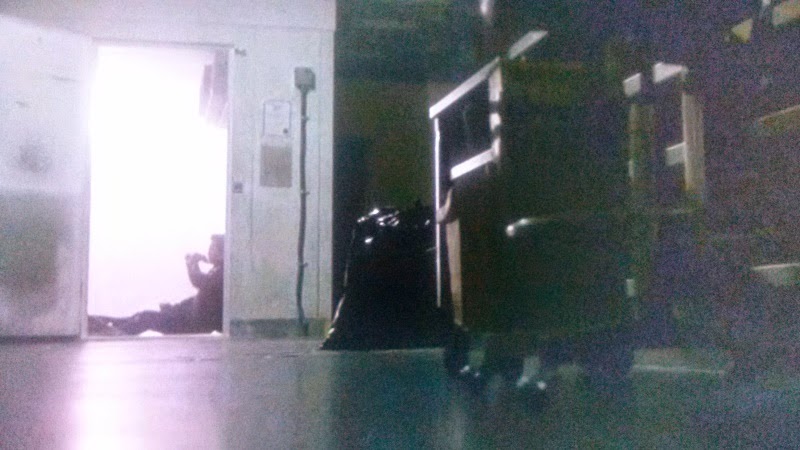 The writers and the director deserve credit for this particularly sad tableau pictured above.  Carlos is framed by the doorway, sitting alone in the half light cold and conflicted.

Depression and drinking is a slippery slope.  How far will Carlos slide?  Will it effect his job performance?  Will her turn on future Keira?  He was poking about Liber8 at the end of last season.  Will he go full revolutionary now?  (Back into the arms of Betty?)

Maybe he will be the one that shoots one of the Alecs.  (Nah, it'll be Emily) 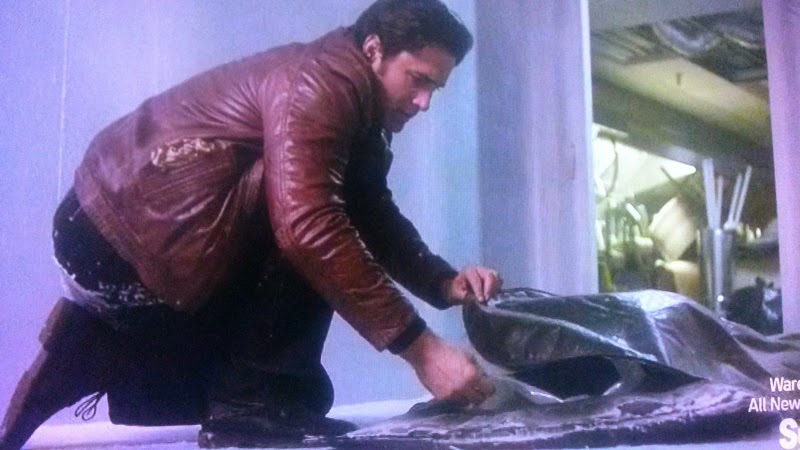 This is a great subplot or B storyline.  It may even surpass the A line of Alec vs. Alec.

Continuum has really ramped up the action.  My future and past self can't wait for Friday!