Penny Dreadful - The Many Faces of Ives 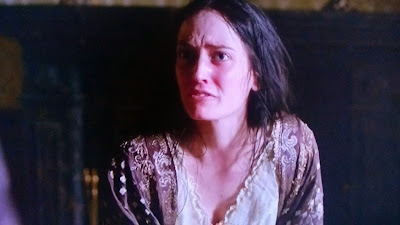 Say what you will about Penny Dreadful's Gothic nature (and it got decidedly more horrific as of this last episode) it is beautifully shot and has a distinct cinematic feel to it.

It is like every character has portrait done on film.  Even the group shots look like they should be hanging in a museum.  The set direction is gorgeous and are done with the perfect amount of lighting and color.  The costumes, makeup and hair only add to this televisual canvas.

With this in mind, it seems Penny Dreadful takes particular delight in making the exquisite Eva Green as grotesque as possible.   No mean feat. 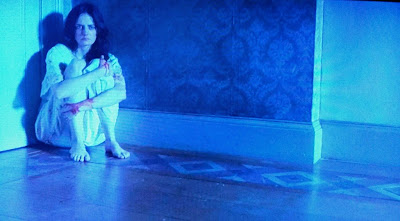 "Verbis Diablo" opened with Vanessa Ives huddled in a corner, childlike and vulnerable.  She has been traumatized by the events of the night before. (episode S2.1 Fresh Hell)  She gazes across the floor at her creation, a scorpion drawn of blood. 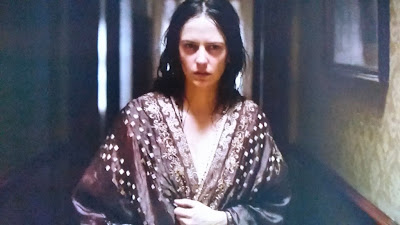 Our next "portrait" finds Vanessa fleeing her boudoir.  Here we have Eva Green without makeup in order to reinforce her gaunt and shattered visage. 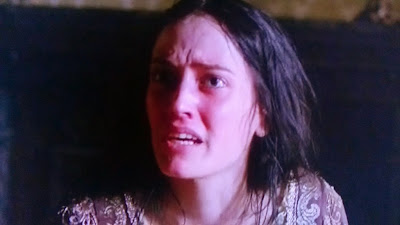 She arrives at Sir Malcom's bedroom seeking the comfort she received from the previous day.  Here, Vanessa is on the verge of utter collapse. As the tears stream down her face she sobs to Malcolm, "Then tell me, where am I to find peace?"  "Not even my prayers are safe."

I had asked in my previous blog post why Vanessa doesn't use her "lightening rod" like powers to seek out evil and actively take the battle to the dark forces instead of being manipulated by them.

Here I think she pretty much answers my question by revealing what a tortured soul she is.

"Tell me I deserve peace." she plaintively begs Sir Malcolm.

From this I gather Miss Ives will always be the innocent martyr.  Despite her usual outward appearance and her strong sense of guile, Vanessa will always be on the receiving end of perfidy.

I can't quite remember how much we got of her origin story from season one, if any, but during her conversation with Sir Malcolm I got the distinct impression that her fate was not of her own but rather the company she keeps.

Is it possible that her relationship with Sir Malcolm or even her mere proximity to him attracts evil like iron filings to a magnet?  If so, this should also apply to her relationship to Mr. Chandler, Dr. Frankenstein and the rest.

If I were prone to crackpot theory I would posit Miss Ives is drawn to people like the aforementioned because of the evil that they do.  When Vanessa is compelled by the dark forces that haunt her, it gives Sir Malcom, Mr. Chandler, Dr. Frankenstein, Dorian Gray and the rest the opportunity to purge their souls of evil by acting to protect her.

Therefore, in a sense, she acts as a living martyr, drawn to the people that need the most help.  Despite their ill deeds and formidable guilt, there is a kernel of good in them. It is to be exposed by rallying to the defense of Miss Ives. 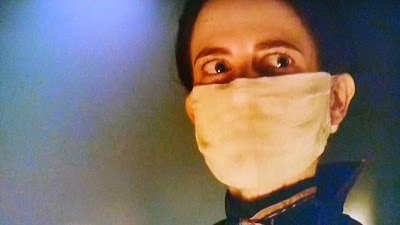 In terms of Psychology a "Persona" is "a mask or appearance one presents to the world."  I thought it clever and I hope it was intentional that Miss Ives and Sir Malcolm entered the underbelly of London rife with Cholera masked from the public.  Hiding their true selves in order to help the less fortunate.

Despite their masked appearance their better angels reveal themselves.  Malcolm and Vanessa eagerly attend to the less fortunate and it proves the tonic Miss Ives sorely needed. 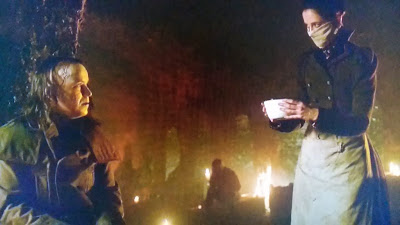 Emboldened by her capacity for charity, Vanessa seeks out individuals to help.  As fate would have it she comes upon Mr. "John Clare" the creature himself.

The two hit it off magnificently.  Their intellectual wit and philosophical bent are a perfect match.  Soon, the words of Blake and Wordsworth swirl through the fetid air. 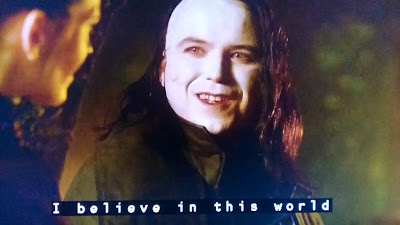 Caliban or, The Creature, if you prefer drops his own mask and actively engages Miss Ives with his positive outlook for the world when prodded with the question, "Do you truly not believe in Heaven?" 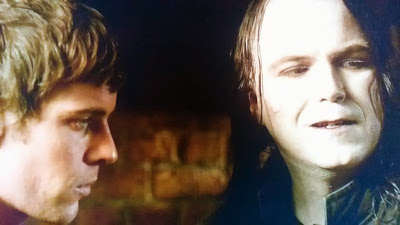 This stands in sharp contrast to the near homicidal threats he usually levels at Dr. Frankenstein as they part company.  Still, he always refers to Frankenstein as "Creator" and admirably wantsto fill the newly resurrected Brona's heart "with poetry." 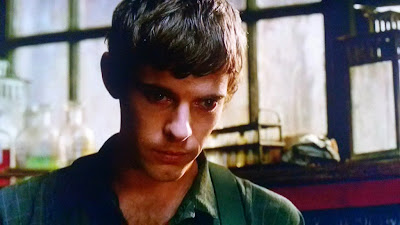 A portrait of Victor's persona is etched on his face as Caliban departs his company.  It is forlorn and fraught with the heavy weight of responsibility.  Victor has created another new life.  As the "Creator" he feels a responsibility towards it.  Probably a sense of responsibility that includes Brona turning out a better person than Caliban.  At least in his eyes. 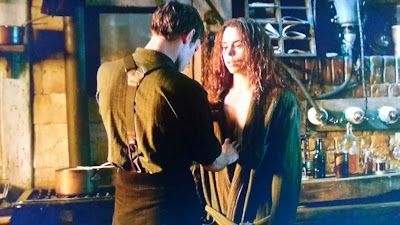 I was afraid the good Doctor looked at Brona or as she is now called, Lily, with a perverse nature.  Now as she stands nearly exposed in front of him, he handles her with affection and modestly closes her robe for her. 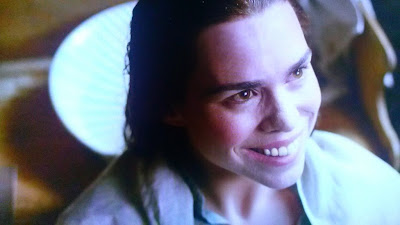 As Victor prepares her for the world she likens herself as a newly formed "Angel."  No doubt Victor feels the same way.  I get the sense Victor will attempt to shield Lily from Caliban.  He'll want to keep her in the Heaven of his own creation instead of the Hell the Creature lives in. 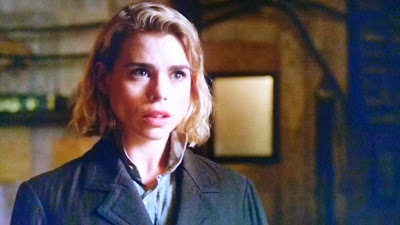 This portrait of our angelic Brona, sorry, Lily, reveals her trepidation as she meets the Creature once again.  This particular episode exponentially tightened the circle of characters in this show.  Caliban now knows Miss Ives and it won't be long before he will decide to "show off" his new love to Vanessa.  Of course, Vanessa works closely with Mr. Chandler and I have no doubt all four paths will soon cross. 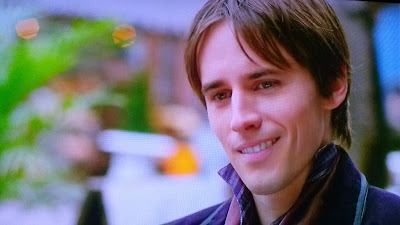 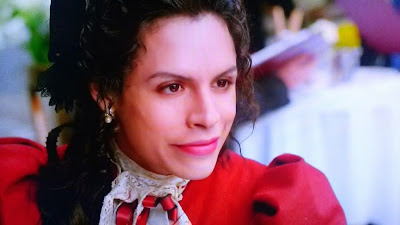 Our study in portraiture is nearly over but would be complete without these two. Dorian Gray, whom we missed in the first episode of this new season, has returned and he meets the lovely "Angelique."  Angelique hits on him pretty hard and provides the catnip Dorian longs to hear when she tells him to stay young and beautiful forever.

Angelique wears a mask of her own and to be honest so does Dorian.  Hers hides a sexual mystery while Dorian's mask is intended to last forever.  He rarely even looks behind it himself.

Angelique seeks to shock Dorian with her multifaceted "reveal" but Dorian is beyond shock and shame.  Angelique may seek to intimidate but I doubt she's met anyone quite like Dorian.  It will be interesting if she is up to the challenge of Dorian Gray. 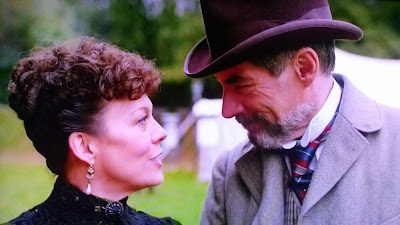 Another lovely couple belongs to Sir Malcolm and Madam Kali.  They really are a striking pair.  Sadly, Kali seeks to insinuate herself into Malcom's life via the Verbis Diablo and other means.  She seeks to corrupt Sir Malcolm and remove him as a player on the board.  One that stands to be a staunch defender of Miss Ives. 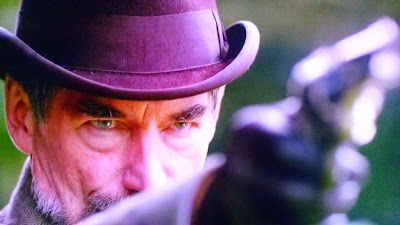 In another world Sir Malcolm played the role of a man with a license to kill.  Let's hope his aim remains true as Madame Kali is a formidable opponent.  If Kali removes him from the board the final piece would be Vanessa.  We haven't been told what Kali's fascination is with Miss Ives but her use of the "C" word means Vanessa stands in the way of something Kali wants.

Vanessa usually plays the victim but her intuition for evil would probably reveal something Kali would rather keep hidden and therein lies the threat. 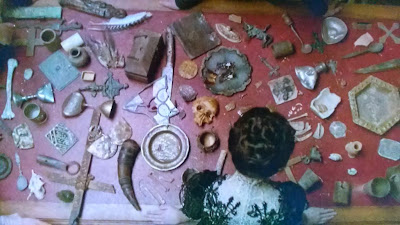 The Verbis Diablo doesn't belong to Kali and her minions alone.  Its secrets can be divined through a little detective work and Miss Ives also has an unknown proficiency for the language.  No wonder she is seen as a threat. 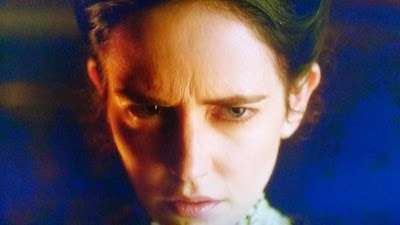 Our episode concludes they way it began, with a study of Miss Ives' face.  Something has stunned her viscerally. 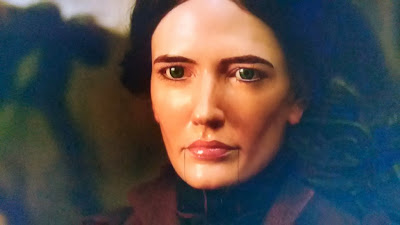 Somewhere across the city sits a wooden doppelganger to Miss Ives.  It sat lifeless until it was infused with the once beating heart of an innocent child.  Now Kali will be able to pull on Vanessa's strings from afar.

I think Madame Kali will seek to maneuver Miss Ives against the others.  As her usual protectors, they will seek to defend her.  But if she is to strike back at them they may lose hope and abandon their efforts to save Vanessa.  This will leave her alone to face Kali where even the bewitched Sir Malcom will be unable to help her.

My prediction, Vanessa's new found friend in Caliban the Creature will be the only one in position to help Vanessa.  His love and belief in the world will gird his heart in defense of Miss Ives.  And, fortunately, as they parted company from their first encounter Vanessa remarked, "You have beautiful eyes."  She saw what many miss when they they avert their eyes from his mask of pain.  A heroic heart worthy of a "Modern Prometheus."