Well this is exciting.

You know, I swear I saw the face of an Alien (from the original movies) somewhere in that horseshoe spacecraft that topples over as the teaser nears its end.  I've replayed it a few times and still can't find it again.  I'll keep searching but what about the space craft???!!!  It's definitely the same one we saw in the original Alien movie.  Only this time it is vertical as opposed to horizontal as we saw in the original.   I always thought that the original craft flew parallel to the ground in it's configuration.  Now it seems that its true flying capability is perpendicular instead.

But I'm getting a little ahead of the game here.  I love how the teaser starts out with a lament.  "I was wrong (we) were so wrong.  I'm so sorry."  Boom!  We're hit with an electronic bass vibe and your heart freezes.  We get a glimpse of what I think is a shuttle craft and suddenly we are amidst a cloud covered landscape that for some reason reminds me of Rivendell of LOTR fame.  I still need to pinpoint that image.  Next three vehicles exit a craft, apparently our explorers, one is a large transport and two are ATV scout like vehicles.  We get a quick cut montage of egg like urns amidst the darkness with "The Giant Head" that we've so much of in the publicity photos.  (Love the giant head.)  We get some images of what looks like a lab, a spacesuit with its integrity being violated, some sad looking people, Michael Fassbender's character extracting a tube with God knows what  in it.

OK, let's pause there.   *Spoiler Alert!*  There has been a lot of speculation on the 'net that Fassbender's character is that of an android.   If you've watched the previous Alien movies you know that early on the Androids are there to preserve and protect the "Aliens".  Is that what he is looking at in the tube?

Next, our vehicles are back only this time they are racing back to the shuttle.  It looks like a full retreat to me.  It's funny how the large transport is leading the pack.  Things must have gone horribly wrong for it to outpace the scout vehicles.


We get a lot of reaction shots next.  People look a little alarmed.  Charlize Theron's character is on the run and Idris Eba's character looks to be crying out in alarm or shouting a warning.  Just before that the Horseshoe craft is plummeting  downward and, saints be praised, we get to see the "Space Jockey" of Alien fame rise out of the floor of some craft.  A terrific moment and an awesome tease.  We then get a couple of quick shots of the Horseshoe craft and then the next thing we know it is tumbling to the ground.  Oh, did I mention someone is screaming. "Leave!" and Noomi Rapace gets "air-locked" ala Battlestar Galctica!

As the craft falls we get some title screen shots that say, "They went looking for our beginning, what they found could be our end."  Are they talking about mankind and the introduction of the Aliens? Or is this a quote from the Aliens themselves or at least their makers telling us this was some sort of anthropological mission and what mankind finds is the end of the "maker" species?

Below is the theatrical poster to the movie that has recently become available.  It features the Giant Head.  I thought there was an interesting parallel to that head and the head left behind by the Olmec people that preceded the Aztecs in Mexico. If that parallel plays out then perhaps this is an anthropological like mission and mankind went to explore the origin of a species.  What they found was eventually deemed more valuable (the Aliens) but all the warnings to stay away went unheeded.  That is how the "Alien" movie started out.  With a warning to "stay away".  Maybe our hardy band of explorers left behind that warning and the apology we hear at the beginning was the lament that their own intercepted warning was dismissed.  Bad things happen when steal fire from the Gods!

Here's the poster and the Olmec head. 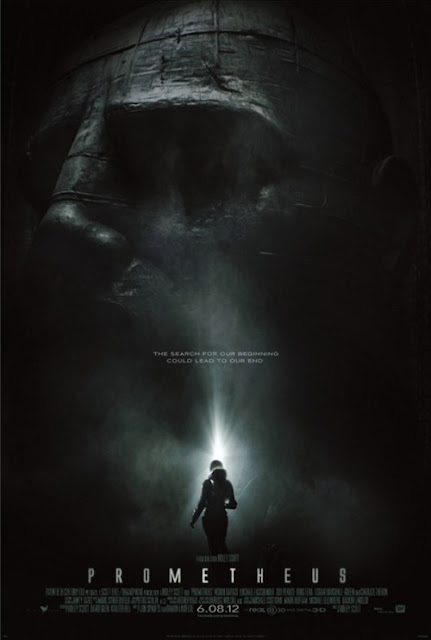 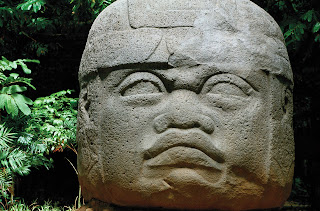 Click on the poster and it will act as a link to the IMDB page for Prometheus.
Email Post
Labels: Alien Aliens Ridley Scott Charlize Theron Michael Fassbender Olmec people Prometheus