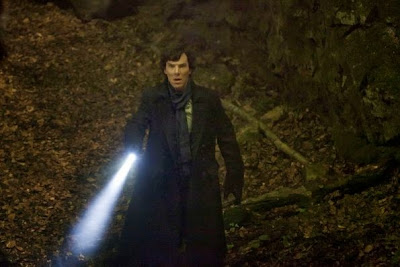 Some images from BBC's "Sherlock" series two have recently become available and the one I've posted above is from their adaptation of "The Hound of the Baskervilles".  When I first saw this image it looked as thought Benedict Cumberbatch's Holmes was swinging a light sabre ala Star Wars fame.  Now wouldn't that be an amazing mash up of two iconic tales?  As it is, he is actually carrying a flashlight or "torch" as the Brits would call it.  Sherlock is no doubt scrambling through the Yew trees and canvassing the moors in search of the elusive Hound and or its victims.

You have to admit it is pretty close to the image posted below of Sir Alec Guinness also armed with the aforementioned Light Sabre.  It would take someone for more adept than I at photo-shop to merge the two images into one glorious Sherlock Holmes/Star Wars cross over. 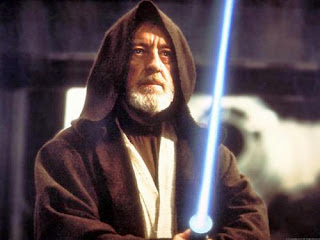 Below I've included a teaser also from the upcoming Sherlock series.  There have been several made available but this one is my favorite.  It depicts Cumberbatch's "Sherlock" at his most arrogant, impatient and flippant.  The way he tosses off a "laters" as he departs company from his new clients is quite funny.  Cumberbatch has really nailed his version of Holmes and it is probably the best adaptation of Holmes since Jeremy Brett did his for the Granada Television series.


No word on the premier for Sherlock series yet but hopefully this spring of 2012!