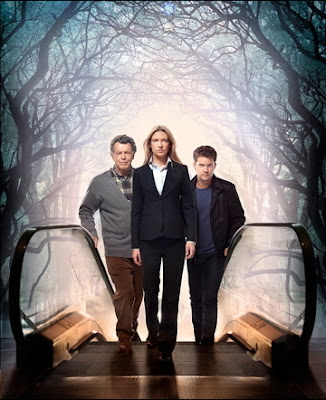 I'm still catching up on some old things and one of them is the "new" poster for the last parts of season four.

My first impression was that has to be an old stock promo picture of Olivia superimposed into this scene.  If you take a look at the season one promo picture below you will see the obvious similarities. 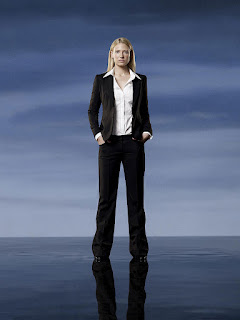 This is from a period of early Fringe when they kept Olivia as drab as possible.  Partly because it was in keeping with her early ZFT soldier status and also because I don't think they had fully fleshed out her character yet.  Despite her relationship with Agent Scott the people at Fringe didn't seem to want to feminize her too much.  With the increased popularity of the show, I'm thinking they decided to lighten Olivia to make her more attractive to the masses and showcase her natural beauty when Anna appeared off set.

I'm not a big fan of these photo-shopped posters or pictures.  Entertainment Weekly did something similar earlier this season with a cover of the Avengers assembled to promote the movie.  It was just a collection of disparate pictures taken from various sources and pieced together.  It disappointed droves of fanboys and girls world wide.  Come to think of it, the people at the TV show Smallville did this quite often for their DVD boxed sets that came out yearly.  On the plus side, since there are so many call backs to season one of Fringe in this fourth season it is only fitting we are seeing this version of Olivia now.

Aside from my problems with photo-shopping, much has been made of this poster looking like a cover to one of the fictional musical groups "Violet Sedan Chair" albums.  And I agree it does, what with the tree arcing over the principles in this picture.  I do think moreover that these trees are a call back to the "blight" that manifested itself in the Red universe when the inter-dimensional war was in full swing.  Take a look around our players and they seem to be exiting a reddish or even and orange like glow as they step off the escalator.  The trees themselves seem to be ensconced in blue.  Does this mean the problems of the Red Universe are creeping into the Blue one?  Or does it mean that collectively our main characters are moving beyond the past and stepping up and into new adventures?  Right now I'm betting on the former rather than the latter.  I don't think this phase of Fringe is ready to leave it's problems behind quite yet.

What of the escalator imagery?  Not steps mind you, an escalator!

The escalator could be symbolic of Olivia and the Bishops boys rise out the depths of their shared adventures.  Leaving the difficulties of the past behind and moving above and beyond them.  It could be showing them transcending some earthly plane and moving on to a different dimension, one where new adventures await perhaps to an existence they've never known before.

To see the use of an escalator and not a set of stairs is interesting in it's own right.  I can picture some production team bringing Anna, Josh and John to a local mall and have them go up and down an escalator until they got the right shot.  That must have been pretty amusing to watch.  But since they are using an escalator I wonder if the symbolism here is one of an advanced technology versus that of the simple stairs.    Machines and machinery or technologically advanced devices get a lot of play in Fringe.  This could be a subtle clue that we aren't done with the influence of the Machine yet or even the devices the Observers use to manipulate the lives of our three heroes. 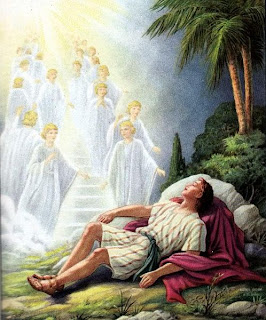 If you want to apply some religious allegory to this image we could see the escalator as some sort of modern day "Jacob's Ladder".  In Jewish tradition, Jacobs Ladder was manifested in a dream of Jacob as he sought to flee his brother Esau.  As we all know dreams play a major role in Fringe.  Alternative lives, dimensions, time lines and futures are all given new perspective and life in the dreams of our Fringe players.  The ladder was populated with Angels and was said to lead to Heaven.  The Angels were symbolic of souls ascending and descending the stairs and this was said to be a reference to reincarnation.  Olivia and the Bishop boys could be seen as the Angels on this stairway.  The allusion to reincarnation is fitting in that Olivia has taken on several iterations of her self.  She's Altlivia in one Universe, and another Olivia that exists in a different time line and in a different universe.  The same can be said of all the characters on Fringe and even Peter as he was reborn at Reiden Lake once more this season.  I explored this very topic of rebirth and reincarnation in my last blog post of Fringe entitled, "Fringe and the Wheel of Life", follow the link to read further on this subject.

If Fringe is to end this season we could see this poster as our beloved heroes finally achieving their just reward.  Going out on a high note and reaching the apex of their adventures.  Finally settling on that plane where literally all is right with the universe(s) the last of their shared plateau experiences.  If Fringe is to be rewarded with another season then like any major mall there is another escalator right around the corner and it could only lead to even further unimaginable exploits.

Let's hope we all get to climb together!