Questions for the Observers

Fringe made its long awaited return last Friday and the major issue of when and where Peter Bishop has been was finally resolved.  Naturally, several more questions popped up and being one who is interested in the "Fringey" aspects of the show as opposed to the romantic pursuits, I found the final scene between Peter and September most intriguing.

First off, I thought there was an tangential allusion to the episode White Tulip so let's look at that.  Peter races up the very stairs where Walter found himself looking up after receiving his White Tulip of forgiveness.  Many people speculated that the Observers were Angels before we found out they were actually humans from the future.  Still, when Peter sees September down the hallway, he is bathed in light like some sort of other worldly being perhaps of divine nature.  Intentionally or not the writers might have made a connection between what Walter was looking for and what Peter finally found up those same stairs.

September tells Peter that the Universe has been hidden from him and that he has been locked out of it.  That begs the question, where did he go?  Was he riding about in that cosmic atrium that he and Peter traveled in  during the episode, "The End of All Things"?  How does one lock an Observer out.  Electromagnetically?  Was September sent to some nether region adrift between time and space?  Is that where Peter was when he was "erased"?  If the beacon allowed September to find his way back did he do it by mechanical means or was the power of his mind enough to sense where he should be.  (I'm hoping it's that one.)  September did say he was "locked" out of the Universe.  He seems hale and hardy now from his gun shot wound.  Was he in a secure Observer hospital room when he escaped?  Or did he travel to where he found another version of himself in time so he could tend to his own wounds together?

September did tell Peter that he had to "go home" previously.  Perhaps September knew Peter would eventually free him and that the Bishop home was just as advantageous to Peter finding Olivia as it was to allowing September to come back.  That would be nice if it all tied in together like that.

September goes on to explain to Peter that he could not be fully erased.  This establishes that "erasure" is possible.  It doesn't explain how one is erased, by physical means or whatever, but it shows the timeline wasn't recorded over as some had thought.  Peter was actually going to disappear.  I'm not sure what constitutes erasure but the power of the human mind seems to have brought Peter back.  Even September wasn't sure how it happened but he credited it to the capacity for love.  Peter's love for Olivia and the rest and their love for him.  Maybe this is the "Forbidden Planet" connection where the human mind has power over the physical world.

One of the more puzzling head scratcher's was the September telling Peter that he believed (Peter) called the principle "love".  Don't they have love in the future?  Why does that seem like such an abstract concept to September?  Is the concept of love that inscrutable to the Observers?  Maybe they should cut back on some of that pepper.  He called love a "uniquely human principle" and in doing so he seemed detached from the "human" part of the equation.  We learned the Observers are humans from the future so why does September sound like he's on the outside looking in on humanity?  Maybe, as a scientist, September was speaking in an abstract to illustrate is role as a scientific observer.  I hope so.  If not, there seems to be a problem in continuity here.  Fringe was gone for a month but these last two episode were literally back to back.  The writers wouldn't flub that would they?

Finally, Michael Cerveris himself.  He is the quintessential Observer isn't he?  It's hard to imagine anyone else giving better definition to this role.  Peter Woodward as "August" was pretty good.  He captured the quirky facial twitches, the head tilts and the vapidity of the Observers emotions but Michael Cerveris is the master.  His arch looks as he gazes at people speak a thousand words.  He gave Peter one of those looks just before he zipped away.  The screencap below seems to have captured what I'm saying. 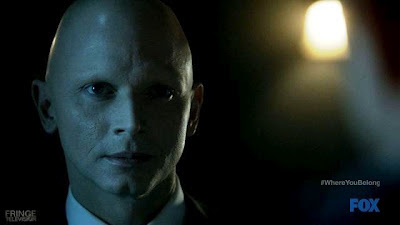 Only September could express sublime knowledge, compassion and a hint of arrogance without showing any emotion.  Oh, Observers, where would Fringe be without you?