Orphan Black - Through a Glass Darkly 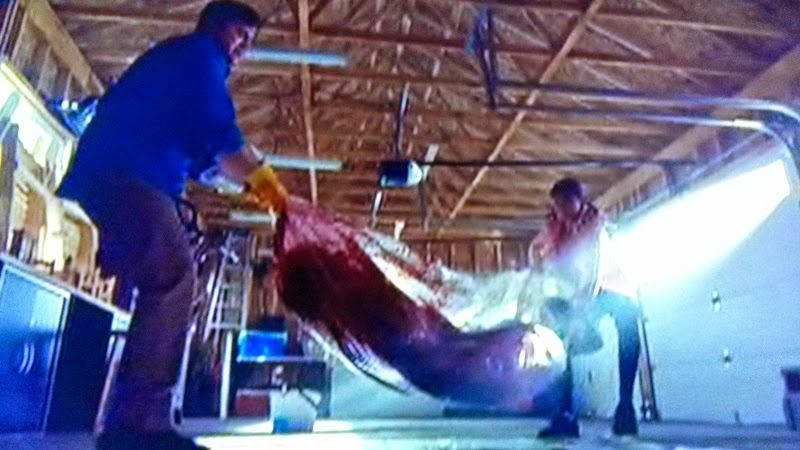 "For now we see through a glass, darkly; but then face to face: now I know in part; but then shall I know even as also I am known."  (King James Version.)

The above phrase was taken from 1 Corinthians 13 and attributed to St. Paul the Apostle.  Many of you that have read this blog may have noticed that I refer to quite a few  biblical passages.  I'm not particularly religious but this particular quote has followed me through the years and haunted ny consciousness.

Where did I first hear this quote?

Specifically, from the Star Trek movie, "Nemesis."  It was spoken by Patrick Stewart as Jean Luc Picard.  Picard was referring to his nemesis, Shinzon, who was basically a refection of Picard.  I found the quote fascinating.  Maybe it was because of the gravitas that Stewart gave it.  But I think more than that it was the mystery of the phrase itself and how it applied to myself and how I viewed existence.

The biblical phrase itself is open to interpretation.  Some see the "glass" as a mirror and others see it as a window in which one can look upon the world.  A matter of perspective in which you see things in life and how they reflect upon yourself.  Or, perhaps, your own particular window shadowed by your thoughts and feelings.

I've spoken of thematic repetition in Orphan Black and in this particular case it is more than just a clever Easter egg here and there.  In this episode, Director T. J. Scott, has made clever use of light and how it shines, not with brilliance, but with a filtered quality.  This light reveals certain aspects of the plot line and with it how it exposes our favorite characters.  Both in their motives and intentions.

Through a glass darkly.

The topmost picture to this blog post is revelatory to the new mindset between Alison and Donnie.  What were once antagonists we now find allies.  Donnie and his bride are now thick as thieves or should we say murderers.

They now have a common purpose in preserving the secrecy of their evil deeds.  For it not only implicates the both of them in the eyes of the law but it also provides them with preserving their marriage and the family dynamic. 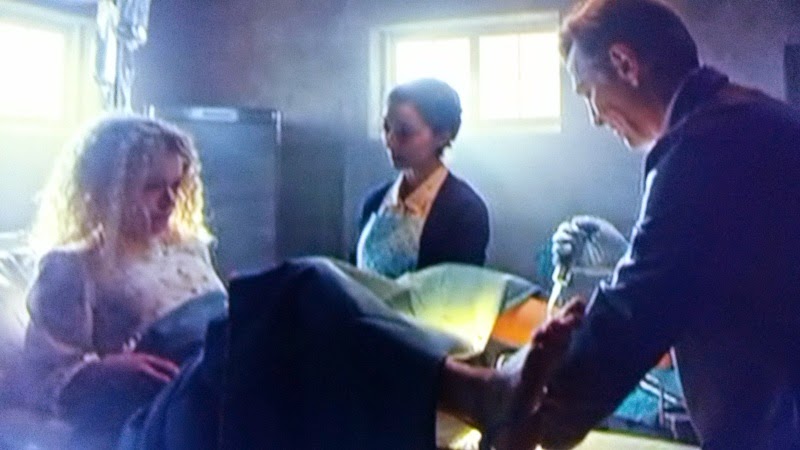 At first, I thought we'd see just a handful of these images but as it turns out there were more than thirty of these such scenes.  I was excited about dissecting all of them until I realized this blog post may well go on until tomorrow!

I'll try to cover the most pertinent ones and I hope you all enjoy and follow them along with me.

As seen above a dim light was cast upon the machinations of Henrik.  As he sees it, it is his duty to perpetuate humanity through his odd mixture of science and faith.  It wasn't until later we all realized how perverse his vision was.

For now, Henrik believes he is doing God's work.  Is he really seeing a reflection of himself in the image of God's face or does the light reveal a more nefarious purpose? 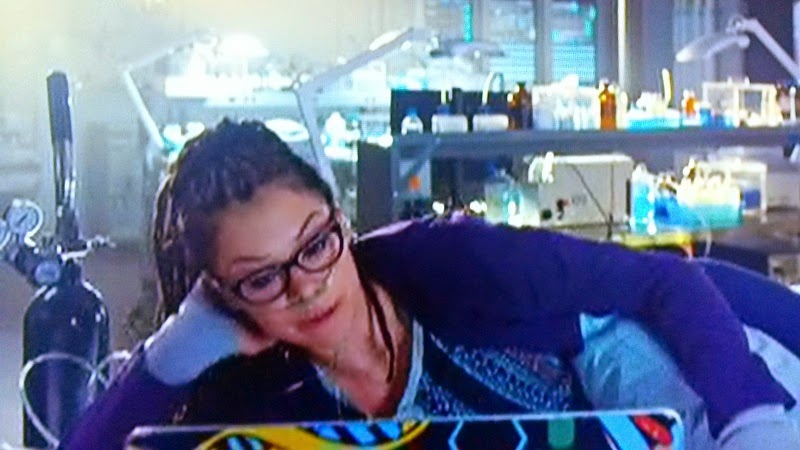 A saintly light is cast upon Cosima as she lays gravely ill but looks upon the reflection of her sisters courtesy of Skype.  She is buoyant and positive as she downplays her condition and apologizes to her friends for the difficult position she has put them all in.

Cosima is vulnerable and delicate yet she exudes courage and compassion.  A saintly light indeed. 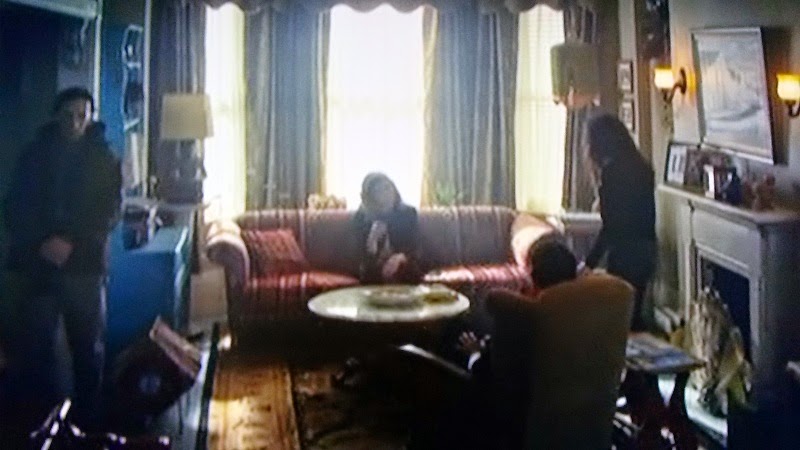 Light winnows it way through drawn curtains as the close knit group of Benjamin, Delphine, Sarah and Siobhan.  They are conspiratorial in nature and for their part, thanks to Cosima, have a major decision ahead of them.  Delphine pleads her case as Sarah wrangels over the decision she must make.  Mrs. S is there to lend advice while Benjamin provides silent guardianship.  Four different points of view cast in the same light with different motives. 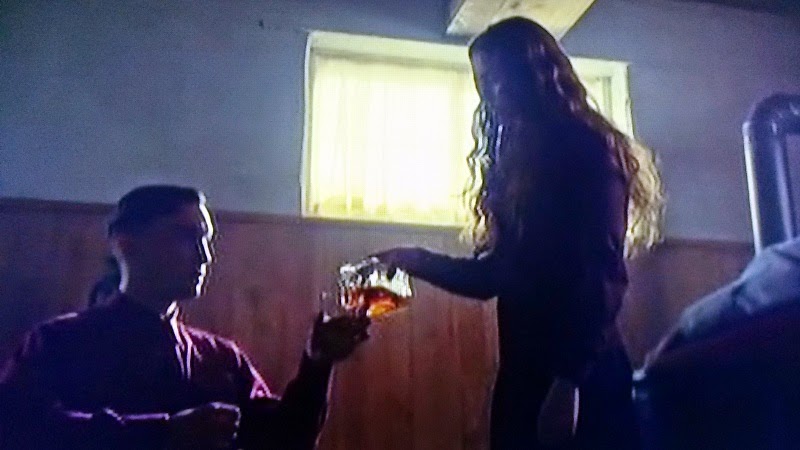 Our filtered light now descends upon Mark, Gracie and Henrik.  Henrik seeks to prevail upon Mark the sanctity of his efforts.  A shared drink is meant to seal the deal of another conspiracy and bring Mark further into the fold.  Perhaps not only as a successor to Henrik's efforts but as a son also.  A son whose union in the family is meant to bear fruit to humanity.

Unbeknownst to Henrik, our darkened light bears witness to a silent covenant between Mark and Gracie.  It casts a pall over the Henrik's plans but brings a fluorescence to Mark and his Love that will transcend Henrik's perfidy. 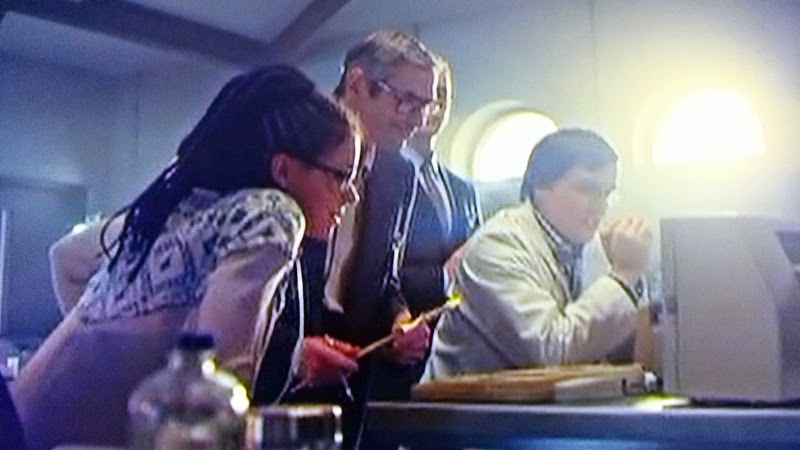 This is one of my favorite scenes as the joy of discovery shines brightly for all involved.  The only downer is the Dyad goon that acts both as a watchdog and a bean counter.

None the less, Cosima, Ethan and Scott are aglow in their shared purpose.  They are on the brink of something wonderful and the shared excitement permeates our living rooms thanks to the radiance of our TV sets. 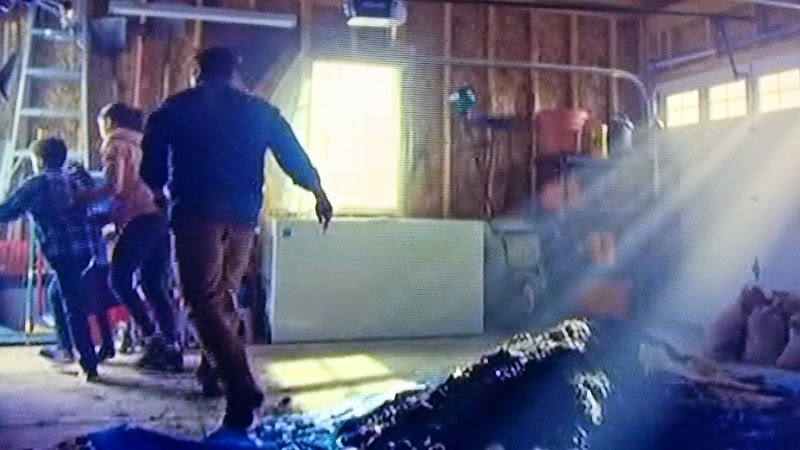 We return to Donnie and Cosima and our glass is dimmed a bit by the intrusion of their children.  The kids have stumbled upon the final resting place of Aldous Leekie.  It is fresh and mounded and stands beneath the harsh light of guilt.  Can the children be shielded from shady deed of husband and wife?  Or will they be pulled into the Stygian depths of their shared malfeasance? 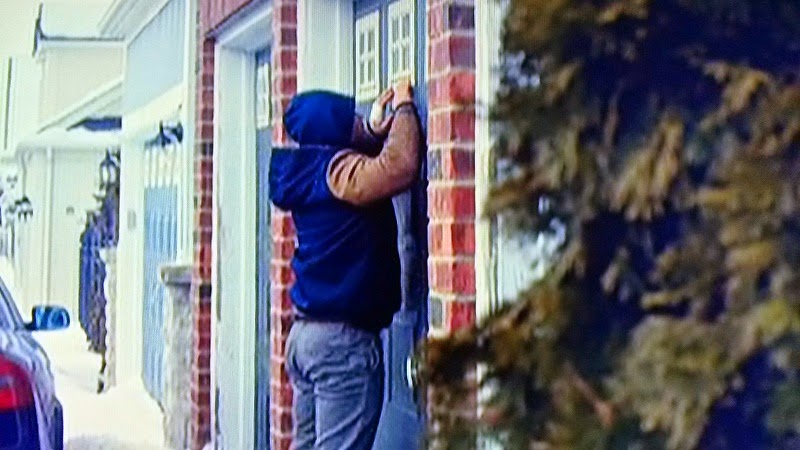 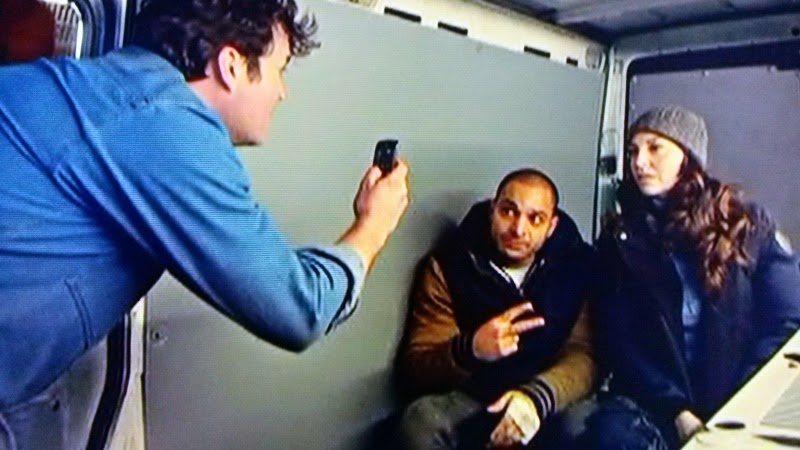 I might be belaboring the issue but I just can't resist the comic skullduggery of Vic the Dick.  At first he seeks to look through the glass darkly of the secretive garage windows in order to expose the plans of Alison and Donnie.  But when the mirror quality of the camera is cast upon him he can't but help flash a wan smile and a gang symbol.  Don't ever change Vic. 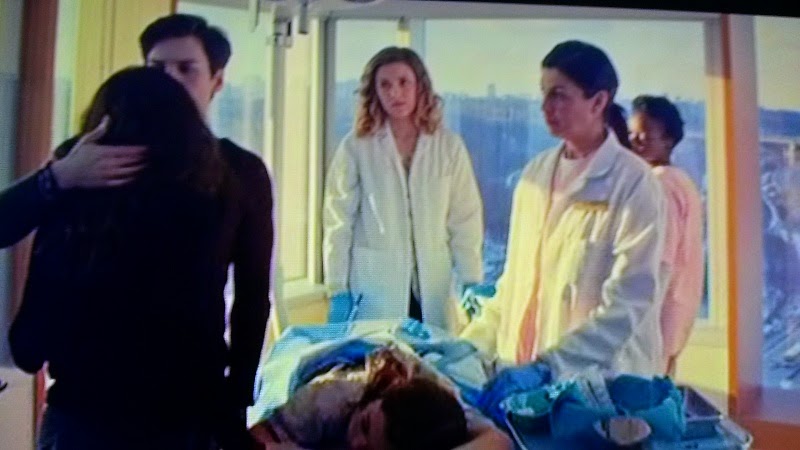 Our dark window now brings luminosity upon Kira, her mother, Fee, Delphine and the Doctor.  It's a bit sad what they put Kira through but the morning light shines with hope upon a new life.  A life that will shine lustrous from the reborn Cosima.  There is both love and guilt here but the greater purpose is the one of the aforementioned hope for Cosima the geek goddess to many an adoring fan. 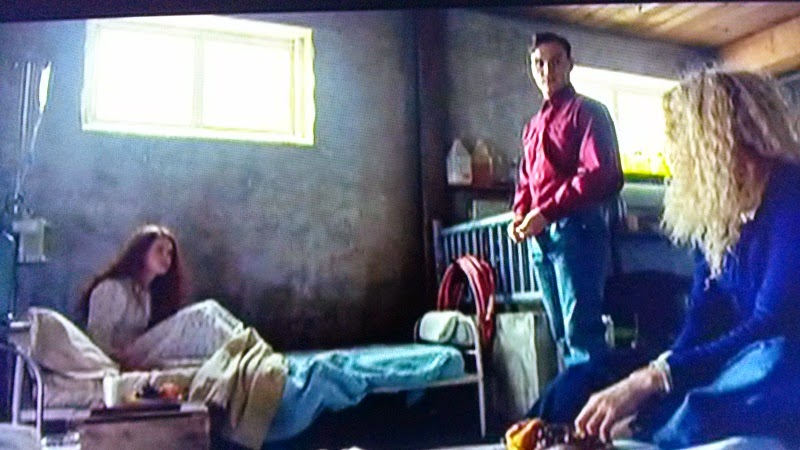 Even in the subterranean depths of the basement birthing room the soft glow of truth shines forth.  Gracie reveals to Helena the true purpose of Henrik's plans.  Mark adds purpose to this truth and Helena, for her part, decides not to become a brooding mare.   The truth will out! 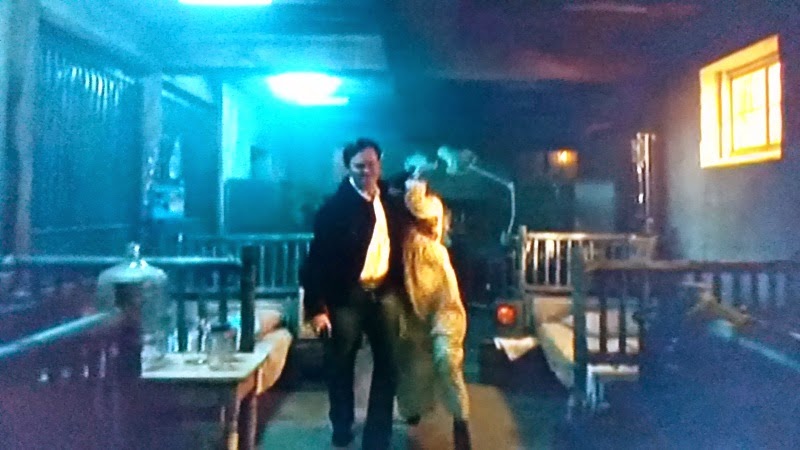 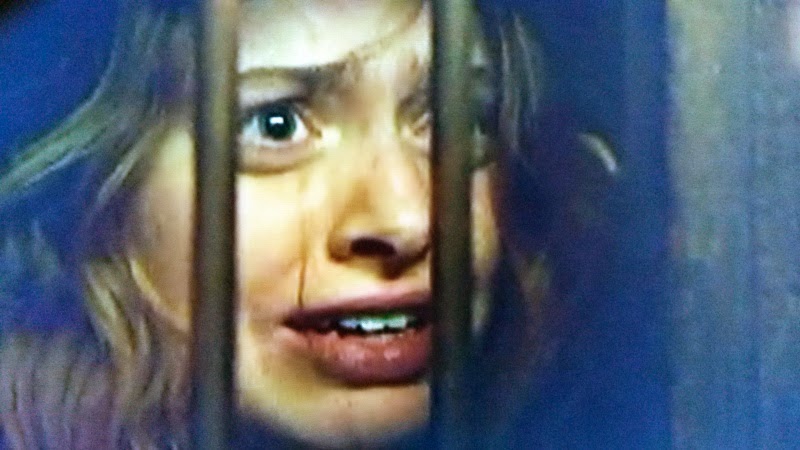 Sadly, the self appointed Dr. Frankenstein adds a lurid gloss to what was just a shining moment.  Gracie is hauled off for her traitorous thoughts and Helena is rendered immobile.  The glass of our window is now reflected trough the bars of an ill lit prison.  Hope is at its nadir. 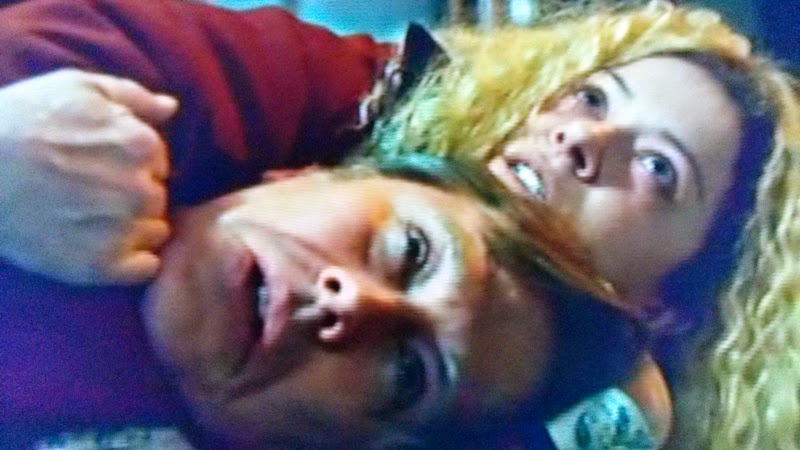 Not for long!  As it has been widely noted on the internet, never turn your back on Helena. 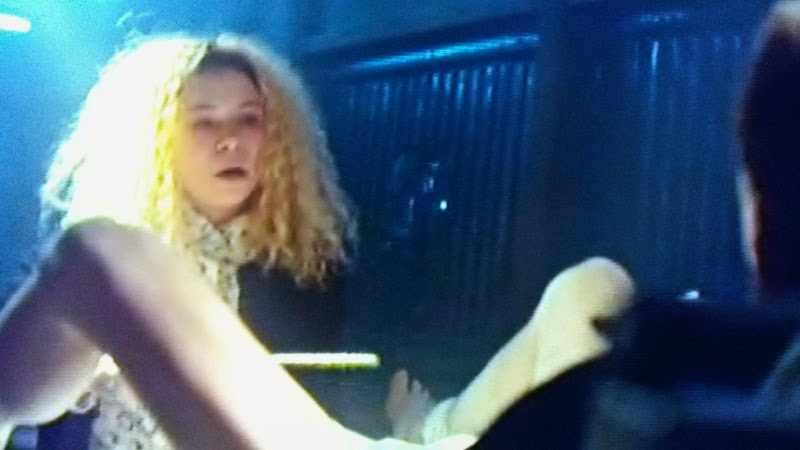 Note the angelic light as it sets Helena's hair ablaze.  Truly she is the avenging angel full of saintlu purpose.  So, um, what is that purpose?

Does it involve where the sun doesn't shine?

Gulp, it does indeed.

Did anyone else explode with shocked laughter at this scene.  Just me?  C'mon, it was funny!  Wow, Henrik, what's it like on the receiving end? 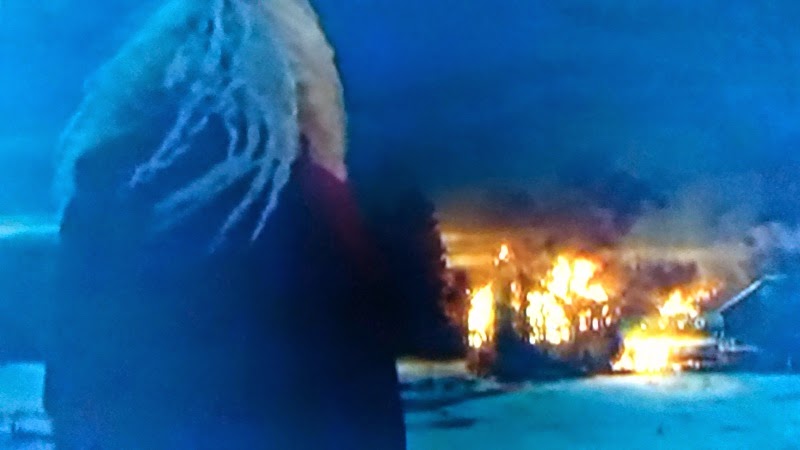 There's more of course.  Did our avenging angel spare the life of Henrik as Hell's fury descended upon the Prolethean darkness?  I'm trusting the kids made it out all right.  I'm not so sure about their Nanny as Helena didn't seem so forgiving towards her.  Too bad Mommy wasn't home.

How can a look through a glass so dark be so illuminating? 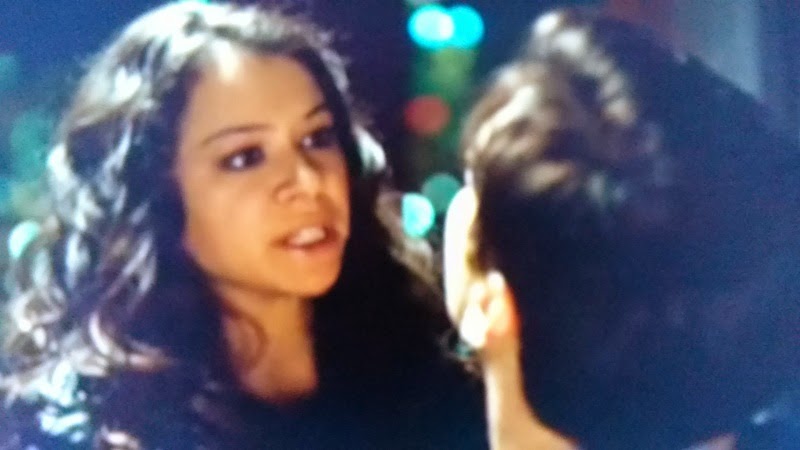 As we near to a close, poor Fee sat alone behind the reflective ambiance of the city lights as it mirrored his solitude.  This was obscenely shattered when Rachel disguised as Sarah burst upon the hospital room.  Excuse the pun but this was pretty brilliant.  I mean I saw it coming when Rachel watched her home movies and pulled  a hood over her head.  But I was still caught off guard.  A great piece of dramatic editing.

We now look through a glass darkly at our final scene. 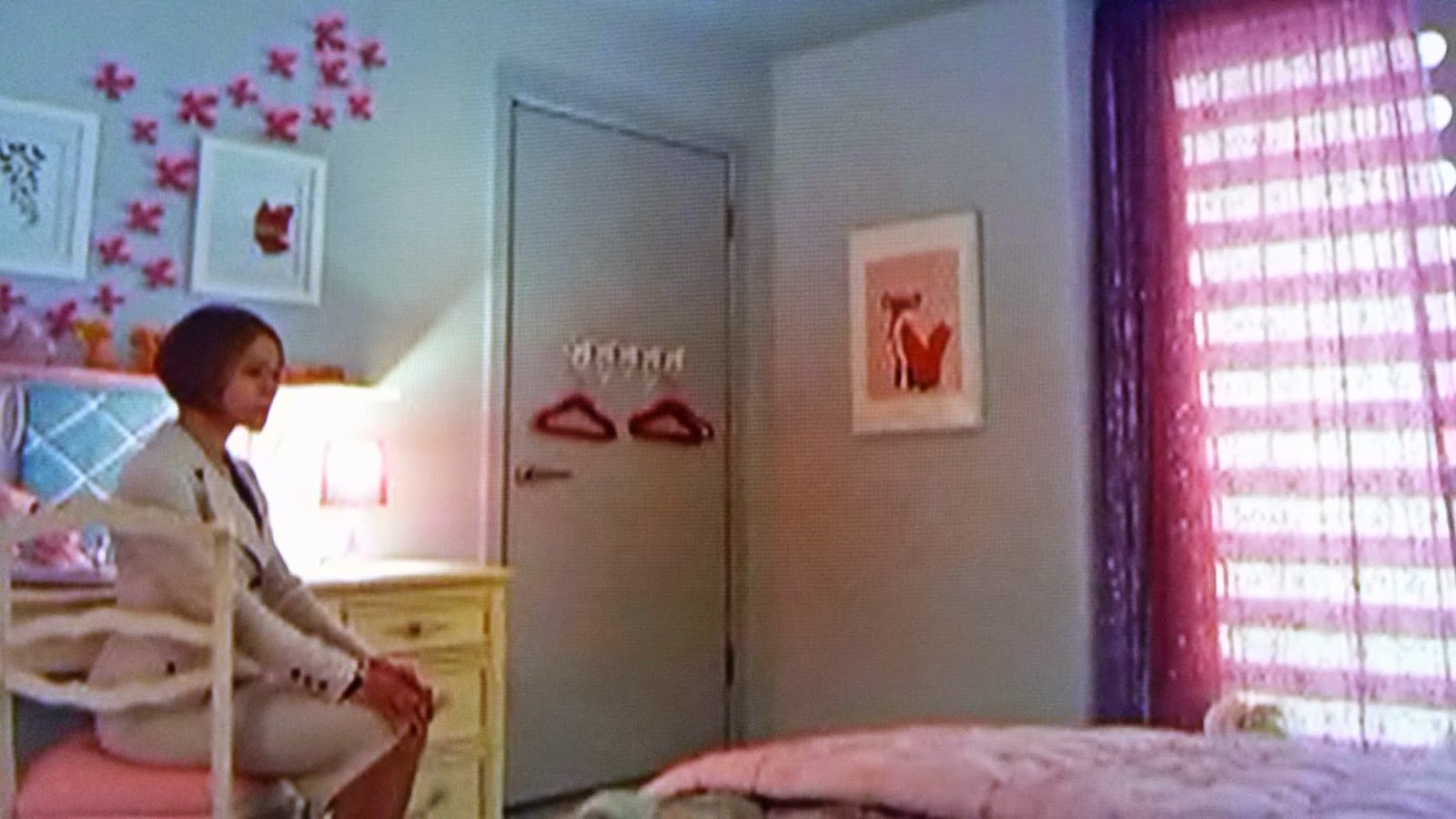 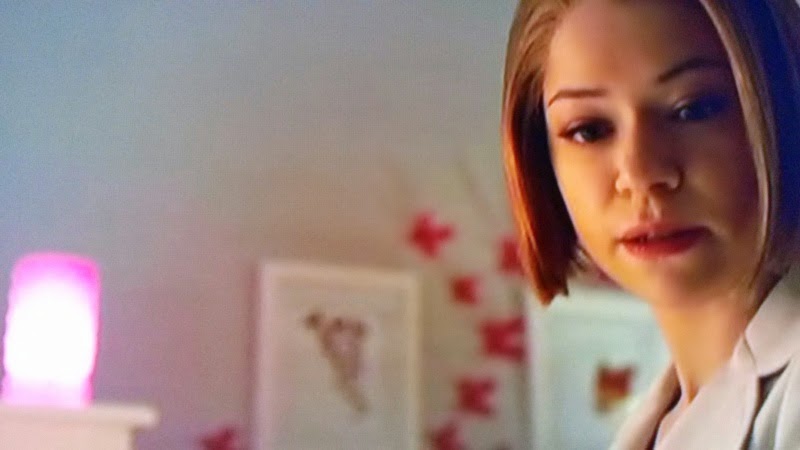 Is there anything darker than pink?

If Rachel can't be a mother at least she can force her motherhood upon another.  I haven't seen a prison this foreboding and ghastly since the finale of Sleepy Hollow.  Poor Abbie then and poor Kira now!

Everything looks nice in a resplendent rose but our pink prison not only confines Kira but it also hold the ghosts from Rachel's bitter childhood.

As I shut my TV off I almost wish the picture would have dissolved into that single point as it used to do waaay back in the day.  It would have brought a singular finality to this disquieting end.

It'll hard for Orphan Black to top this penultimate episode.  By any means it will have to be by something they've never tried before.