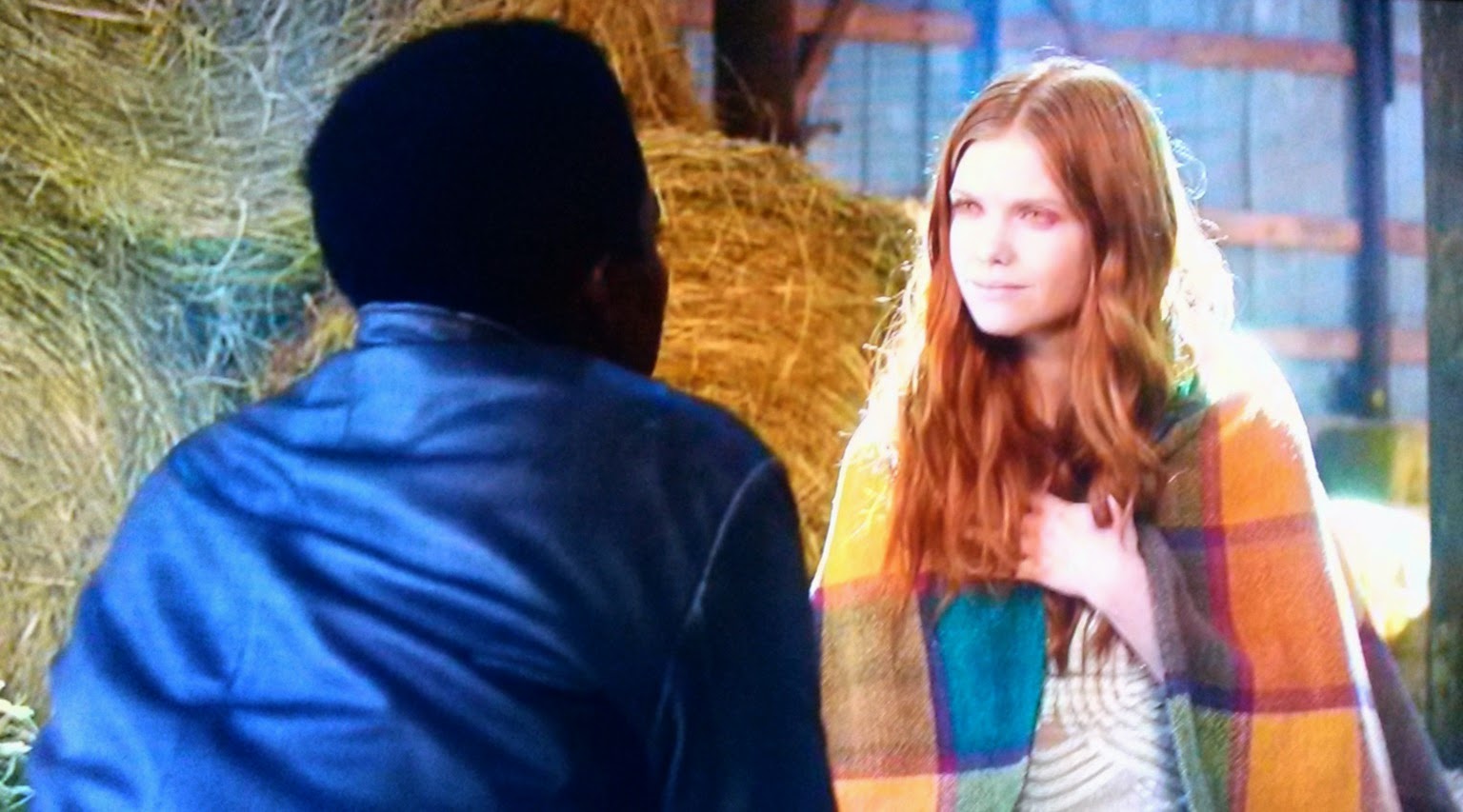 You know, I was pretty proud of myself when I chose the title of this blog post several days ago.  Get it, Angels and Demons, the subject matter, the book?

Then I read a few reviews and, well, everybody was referencing it.

Whatever, I'm keeping it. 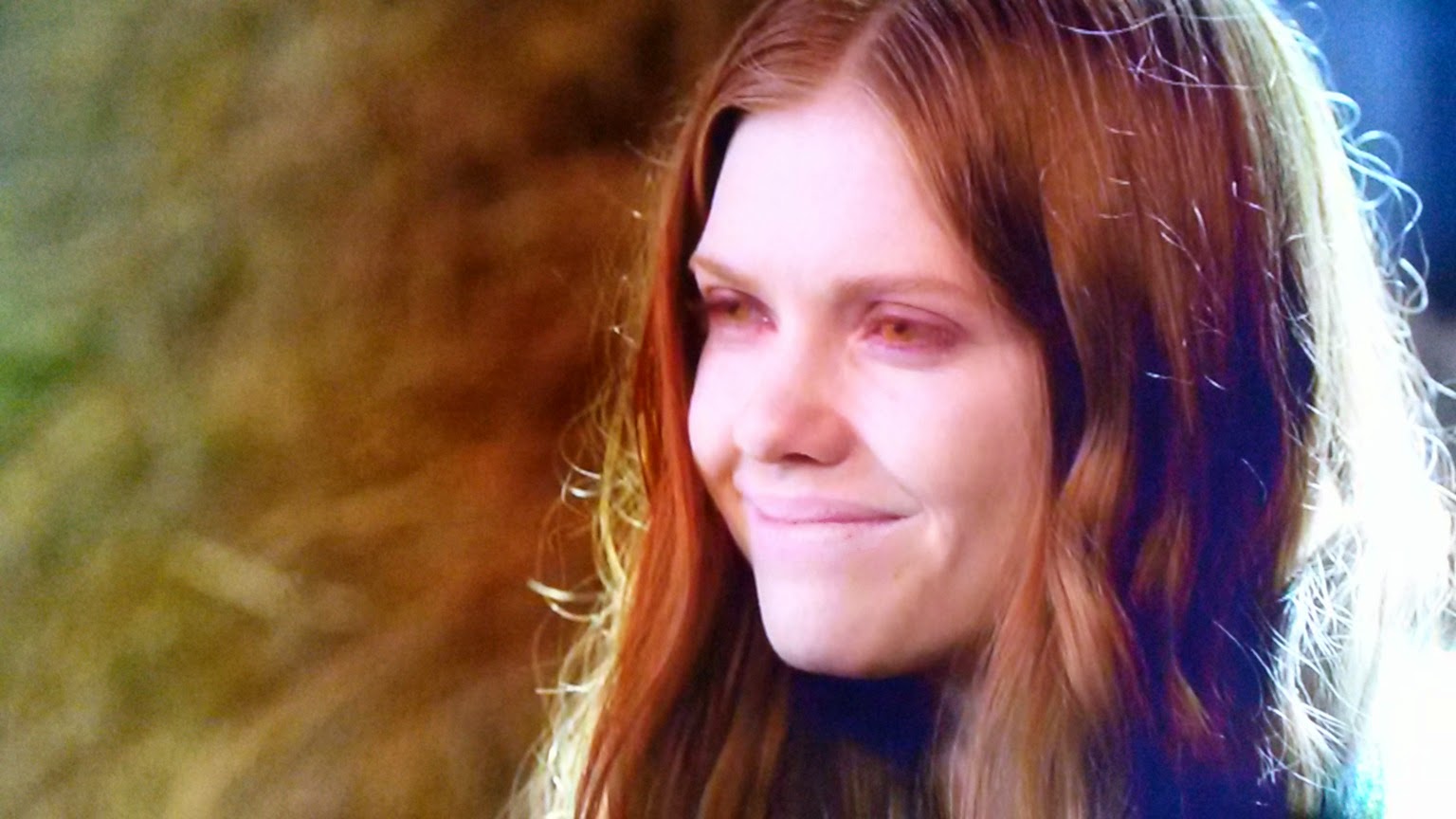 Early on in the episode (Blessed Are The Damned) I thought to myself, "Oh good, we're going to take a look at the inner working of Angels."  "Their place in our world, how they interact with humanity and each other."  And best of all "Why they are here."

I thought we were going to get an intellectual treatise or at least as close to a treatise as and hour of television could provide.

What we got was the basic dumbed down version of good versus evil.  Manny good, Imogen evil.

Close though.  We were within a hair's breadth of really diving in there.  Imogen wanted to take the world back for the Angels.  What I found most fascinating was her exclamation that Angels have been a crutch for humanity. 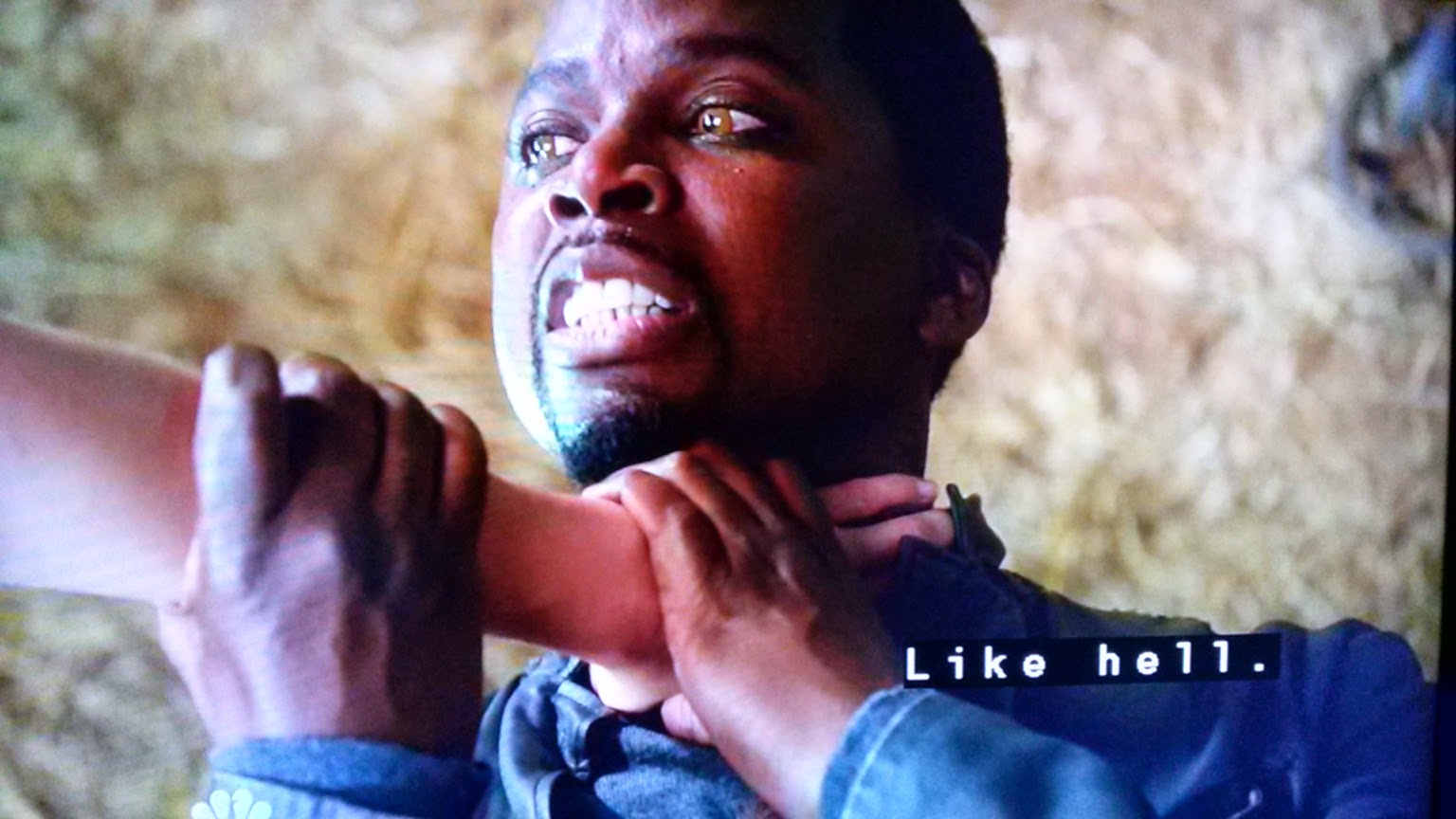 Manny doesn't disprove what she had said.  Instead, he comes to the rescue of Zed and pulls out Imogen's blackened heart.  I think this is something we all wanted to see.  Manny finally becomes more interactive and a little less neutral.  We surely didn't want to see Zed dead (Pulp Fiction reference!) but I would have liked to see Imogen live on and act as a counterpoint to Manny.  Many of you remember Babylon Five and the "Shadow" race.  We all assumed them to be inherently evil but as we grew to know them we found out that one person's evil is an other's good.

If only they were to explore that concept as the season drew on! 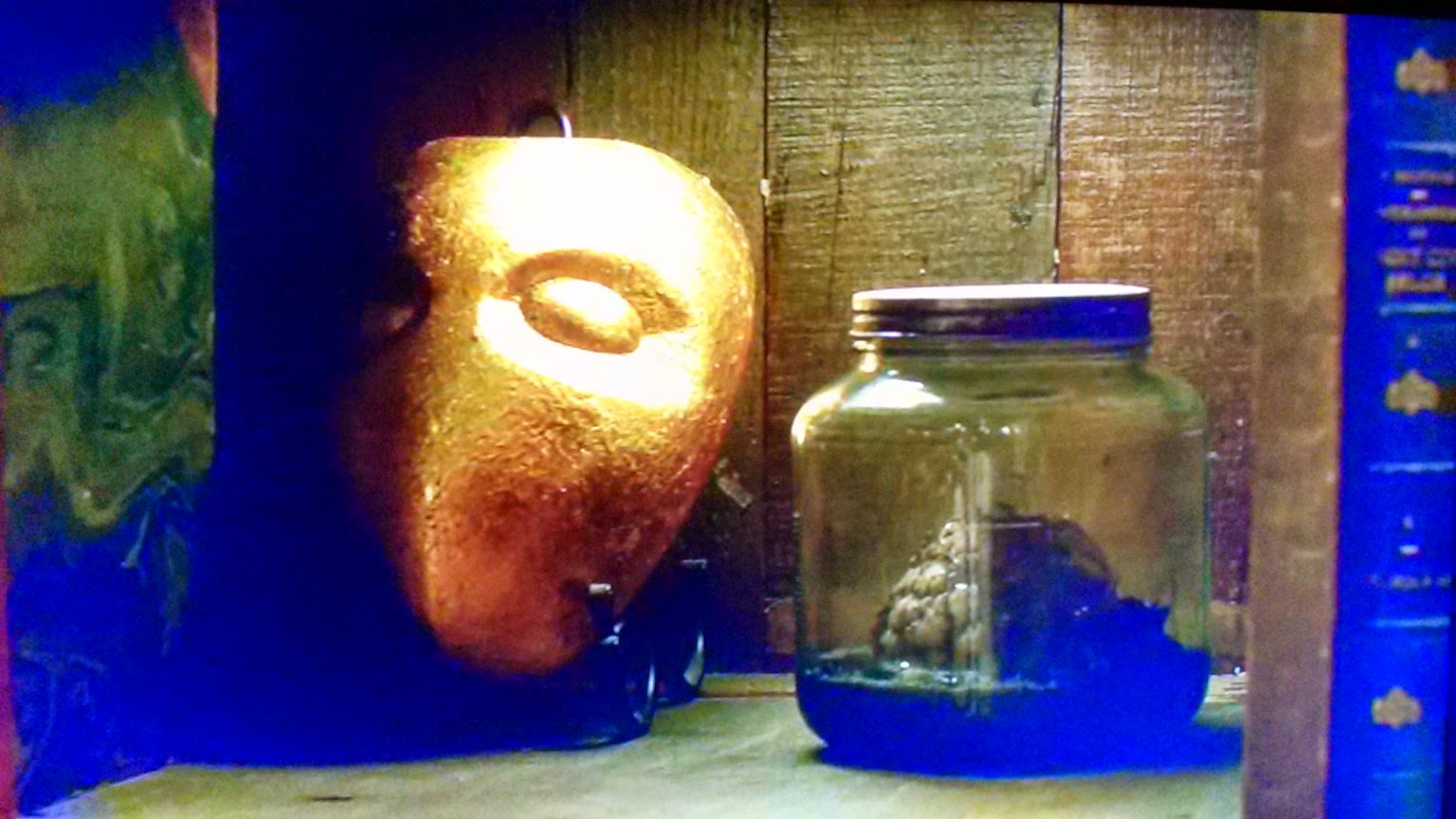 Can Imogen make it back?  What is the mask positioned next to Imogen's heart?  A death mask with restorative powers?  Hopefully we'll find out.

For the most part "Fallen Ones" demons and other beasties have been categorized as evil in the Constantine mythos.  Too bad, I would have like to see a little gray area explored here.  Perhaps that is to much to ask of a show that really hasn't established it's larger mythos and is teetering on the precipice of cancellation.

St. Thomas Aquinas was one of the foremost experts on Angels but some of his writings fly in the face of what we've seen on Constantine such as...

"In bodies thus assumed, angels do not actually exercise the functions of true bodily life. When an angel in human form walks and talks, he exercises angelic power and uses the bodily organs as instruments. But he does not make the body live, or make it his own body." 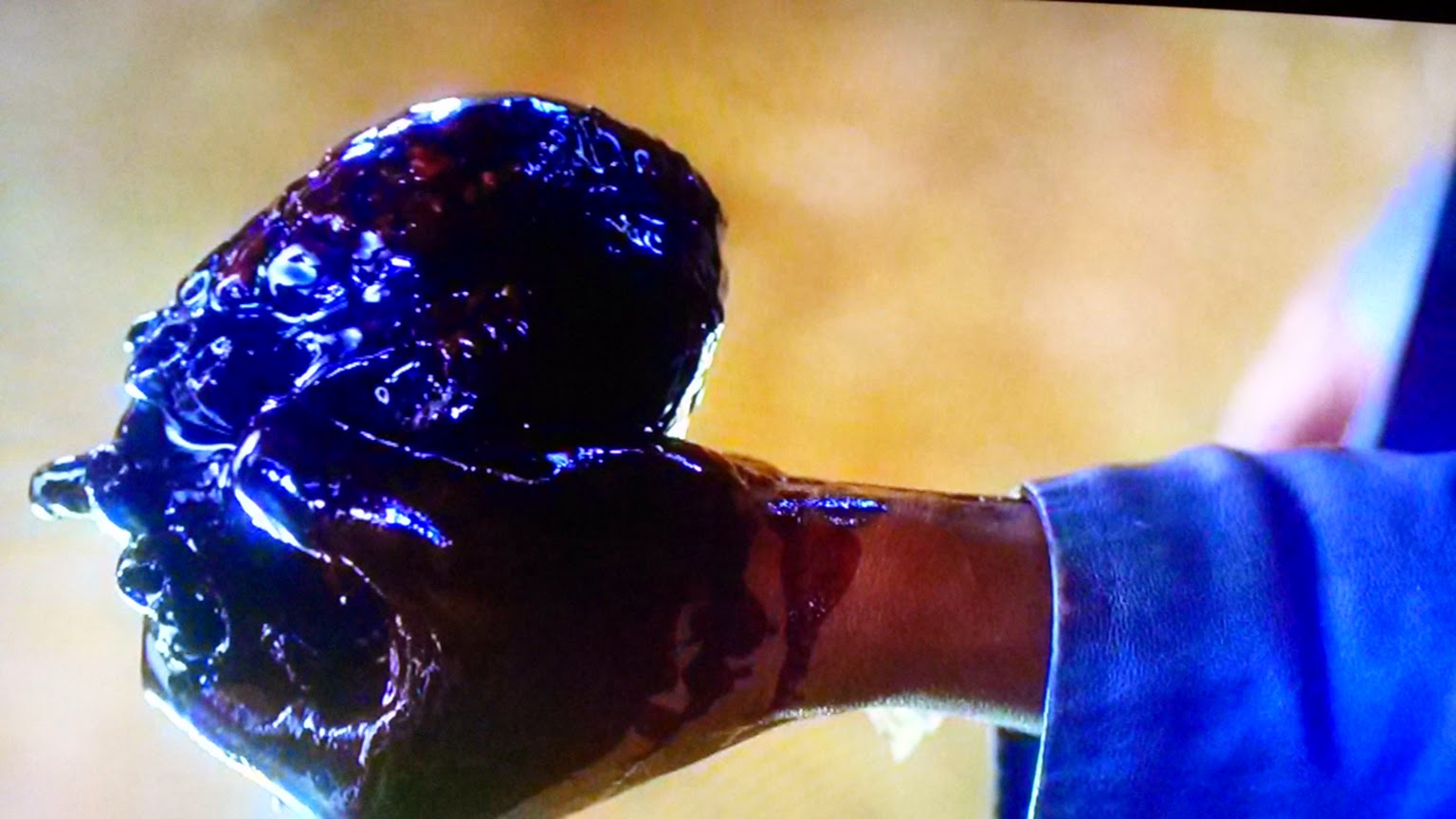 I guess the writers of Constantine aren't followers of St. Thomas.  The above picture of Imogen's heart in Manny's hand gives lie to the statement that Angels don't exercise the functions of "true bodily life."

Does it sound like I'm obsessing over Imogen?  Maybe just a tad.  I found the actress Megan West fascinating.  I had seen her on "Person of Interest" another favorite show of mine so maybe that was the connection. 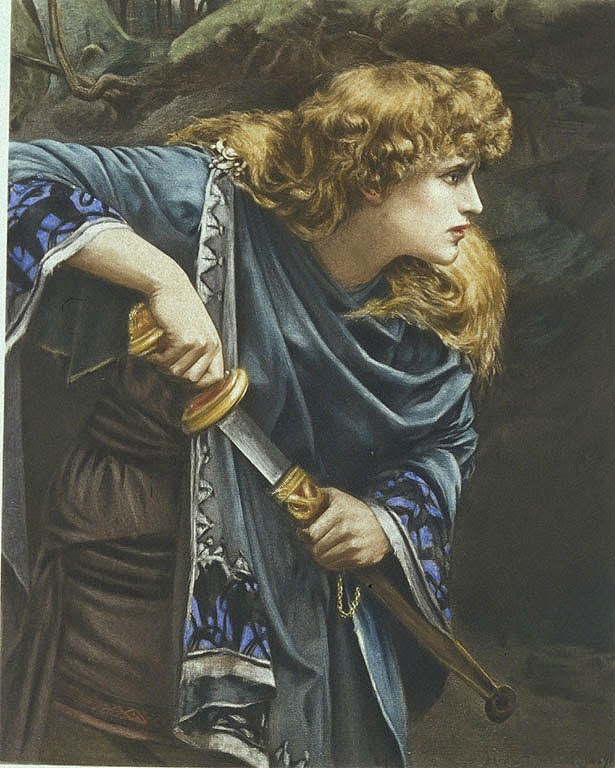 The name Imogen is fascinating in and of itself.  In Shakespeare's play, "Cymbeline," Imogen (see above)  was known for her "moral purity" how odd that she should be the exact opposite in this Constantine tale.  Well, not really, I think we were supposed to think this Angel as the personification of purity and then be shocked by her base and demonic nature when it is finally revealed.

Sigh, I suppose I should move away from my Imogen fascination and proceed with this..... 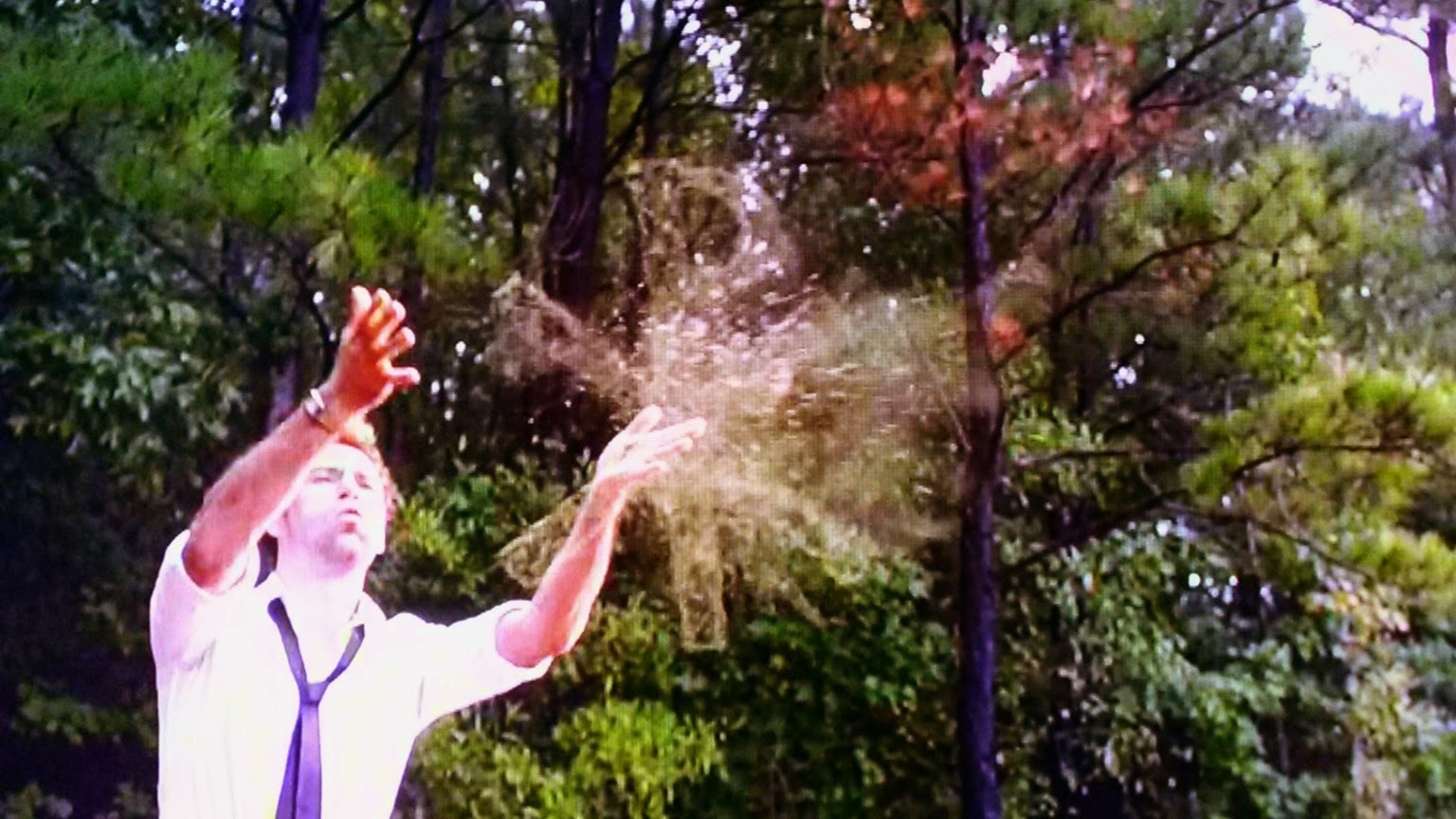 The Cross of Constantine!

See it amidst the spectral dust?  These are the moments DVR was invented for.  I might have been a little too rough with my clicker.  I slammed my thumb down on the pause button and exclaimed, "Hold on now, what was that?!!" 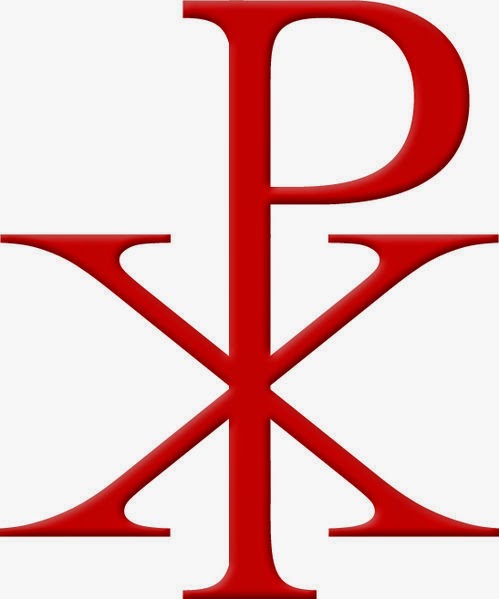 Yes, the Cross of Constantine.  Also known as the "Chi-Rho,"  here's what Wikipedia says about this symbol...

The Chi Rho (/ˈkaɪ ˈroʊ/) is one of the earliest forms of christogram, and is used by some Christians. It is formed by superimposing the first two (capital) letters chi and rho (ΧΡ) of the Greek word "ΧΡΙΣΤΟΣ" = Christ in such a way to produce the monogram. Although not technically a Christian cross, the Chi-Rho invokes the crucifixion of Jesus, as well as symbolising his status as the Christ.[1]

I knew I recognized it.  At first I thought it might be the symbol of the Papacy and St. Peter.  I mistook the X for the crossed keys as seen here. 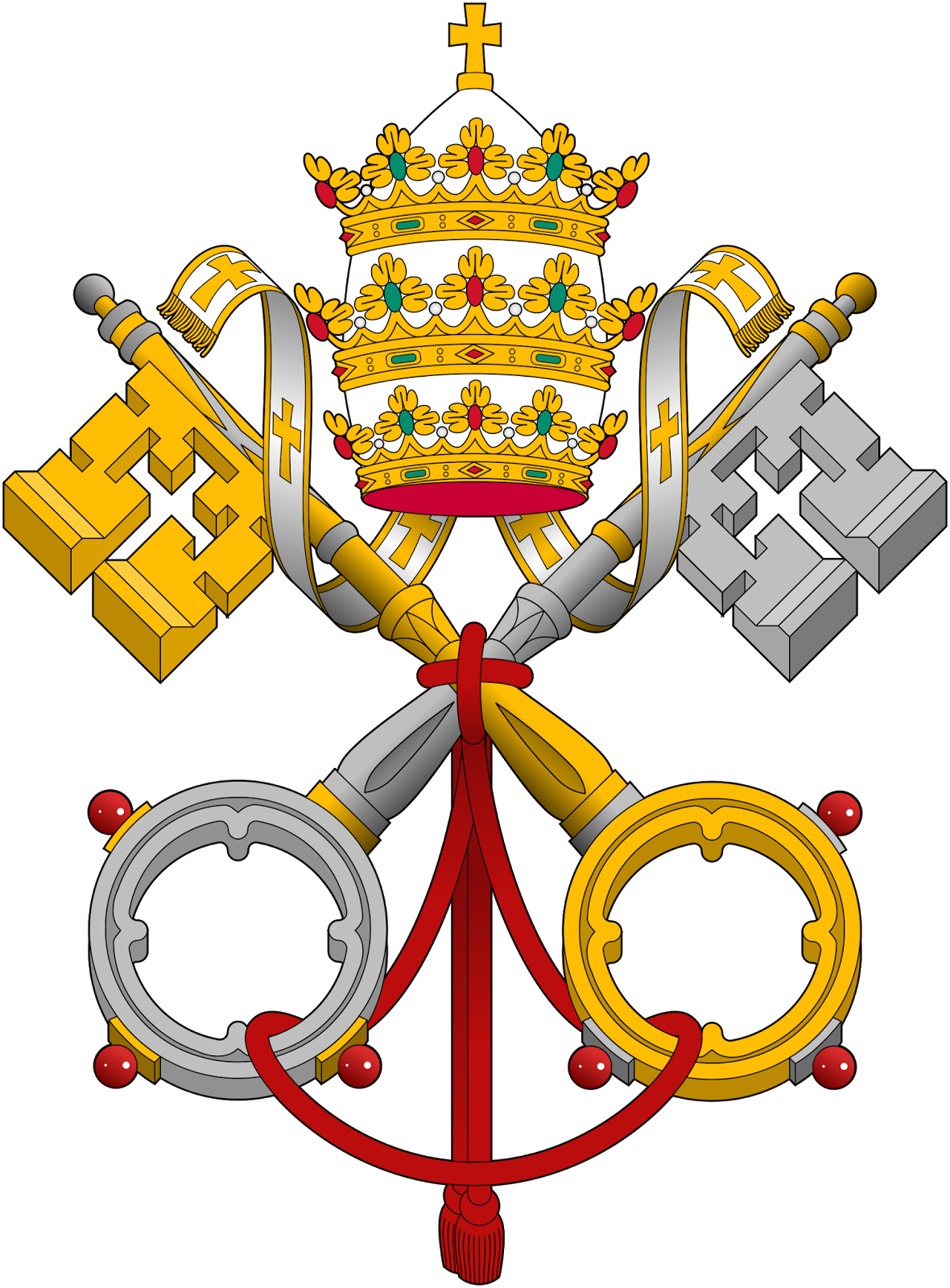 Fortunately a little research disabused me from that fallacy.  Have we seen Constantine use this before?  I think not.  Let's hope we see it again.  It was a nice touch.

Okay, now it is flashback time.

I blogged extensively on "True Detective" and when I saw Zachary do his best charismatic I thought of that show. 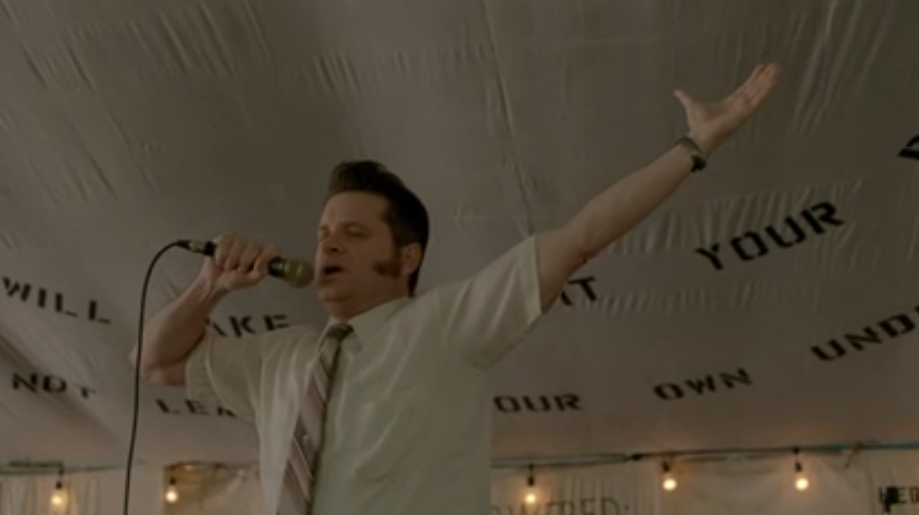 I guess it is a job requirement to have ones arms out stretched into the air when one is preaching to the choir.  What did Rust Cohle call the followers "meat bags?"  I just remember him muttering about the flock that they "won't be splitting the atom anytime soon."

What do the following images say to you? 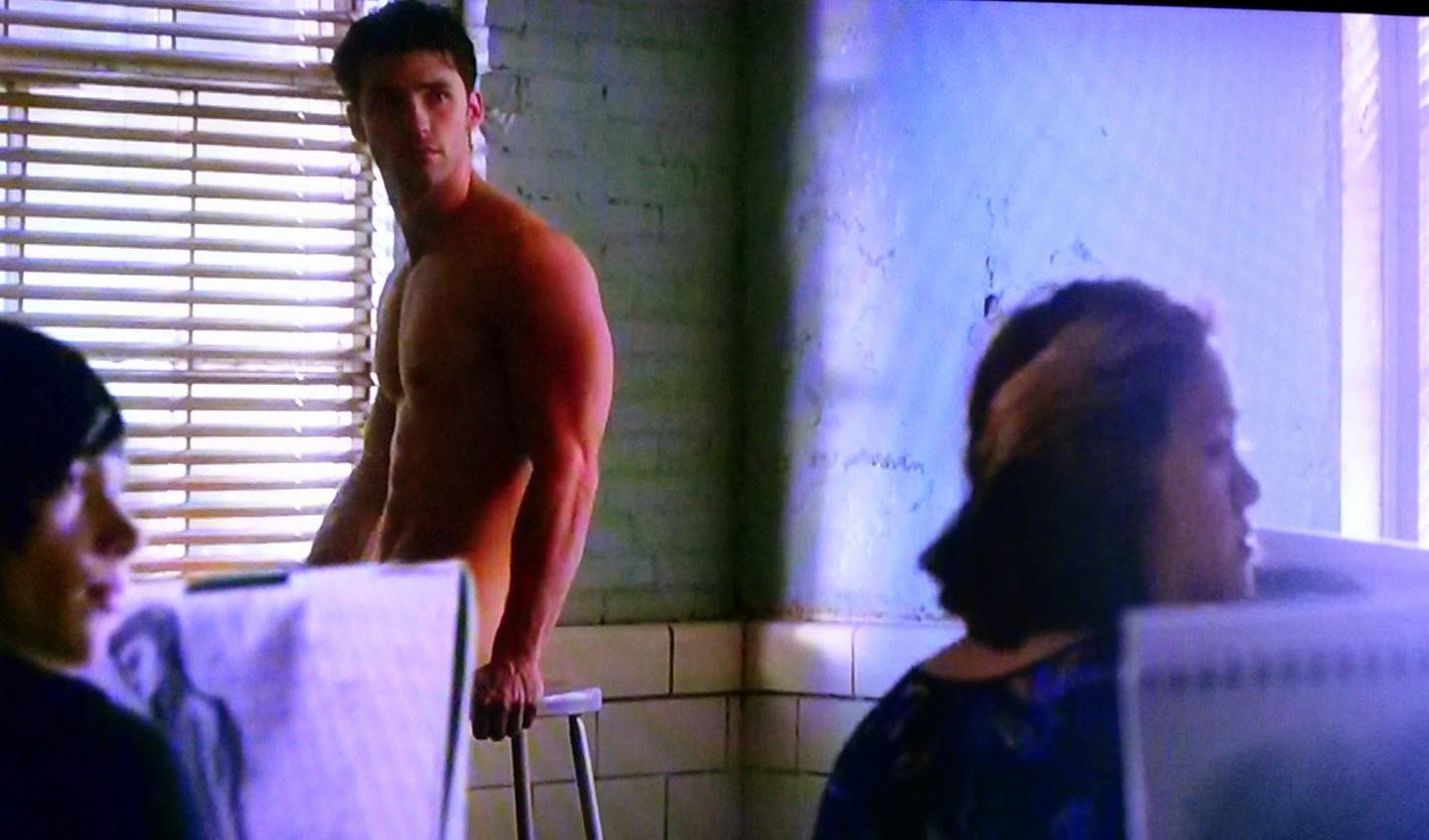 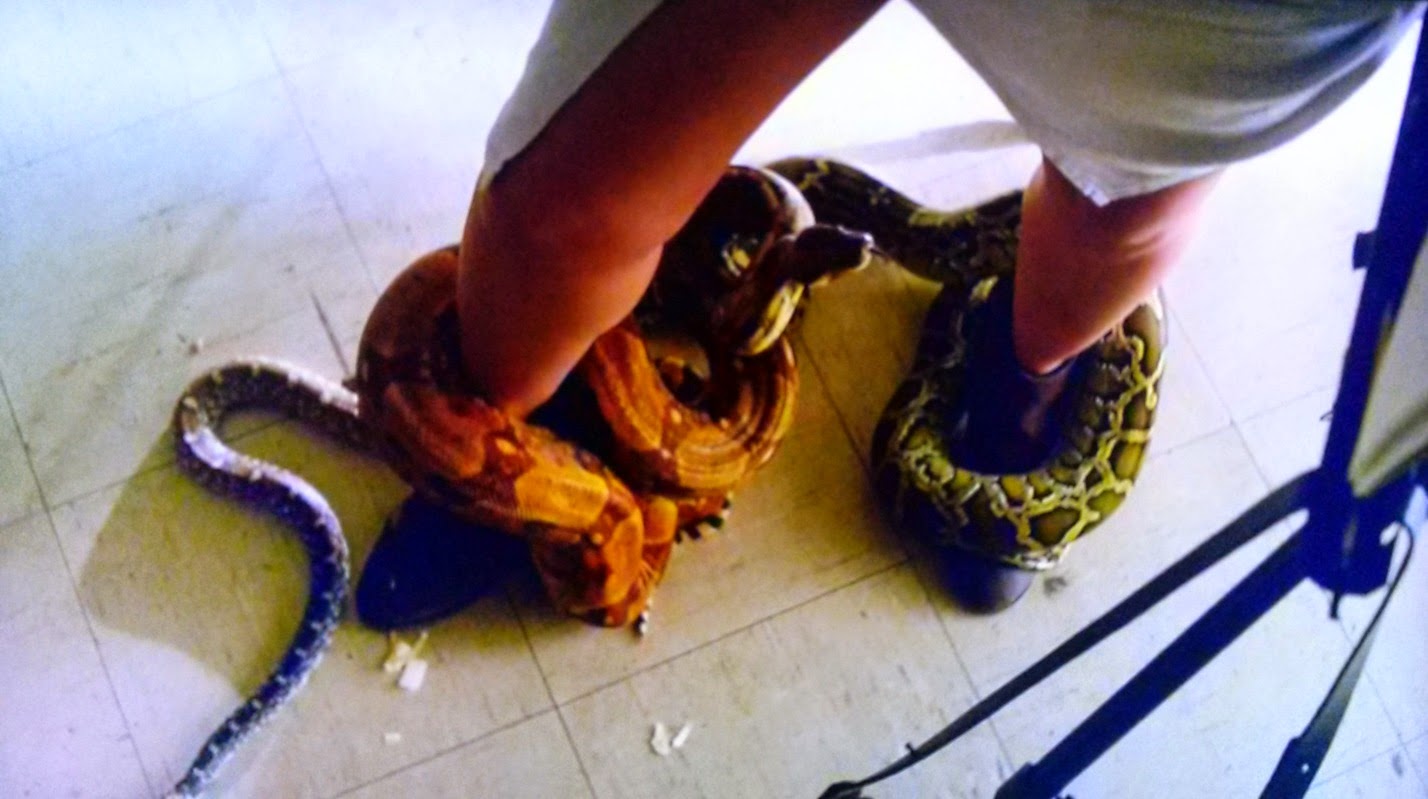 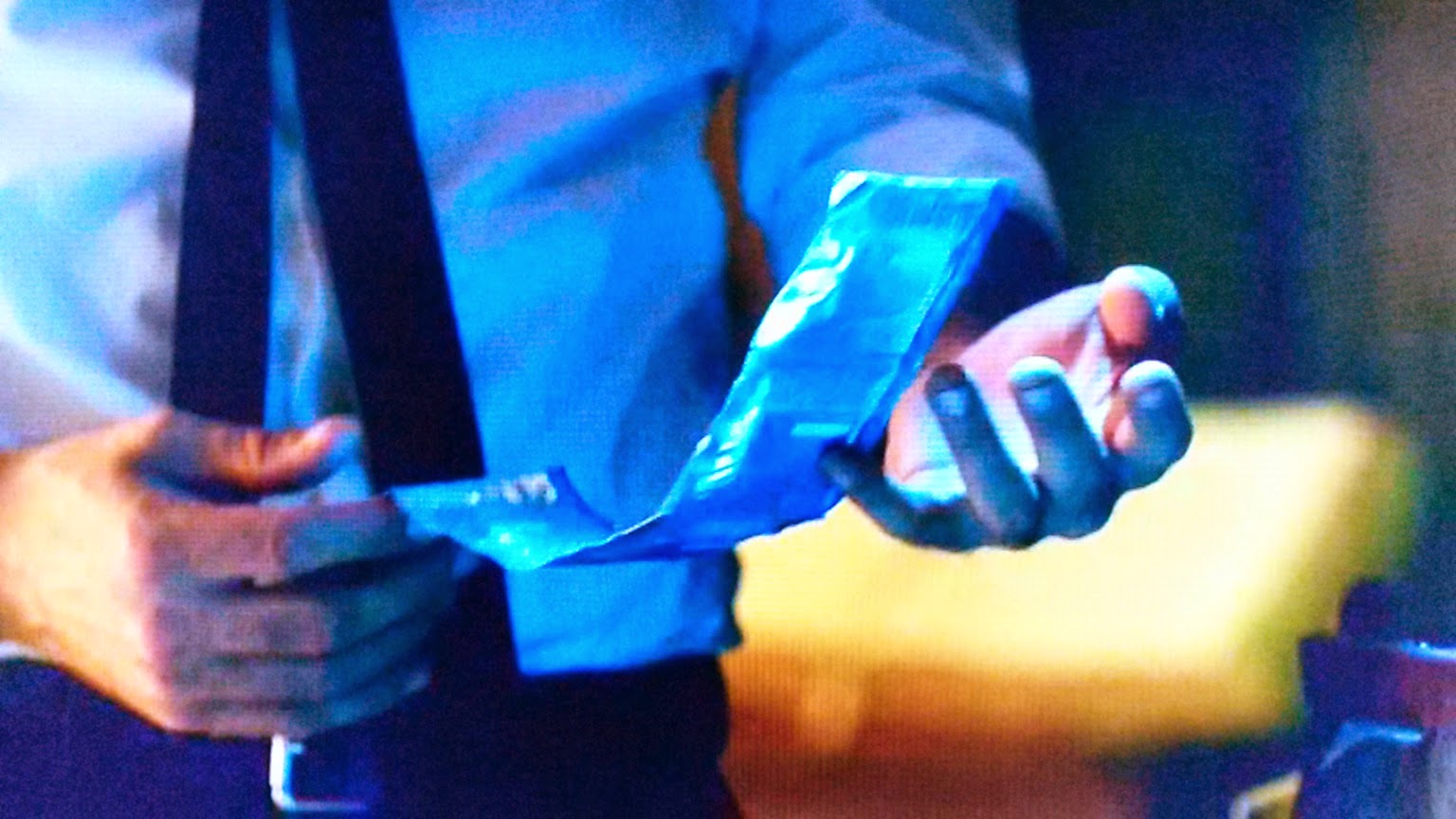 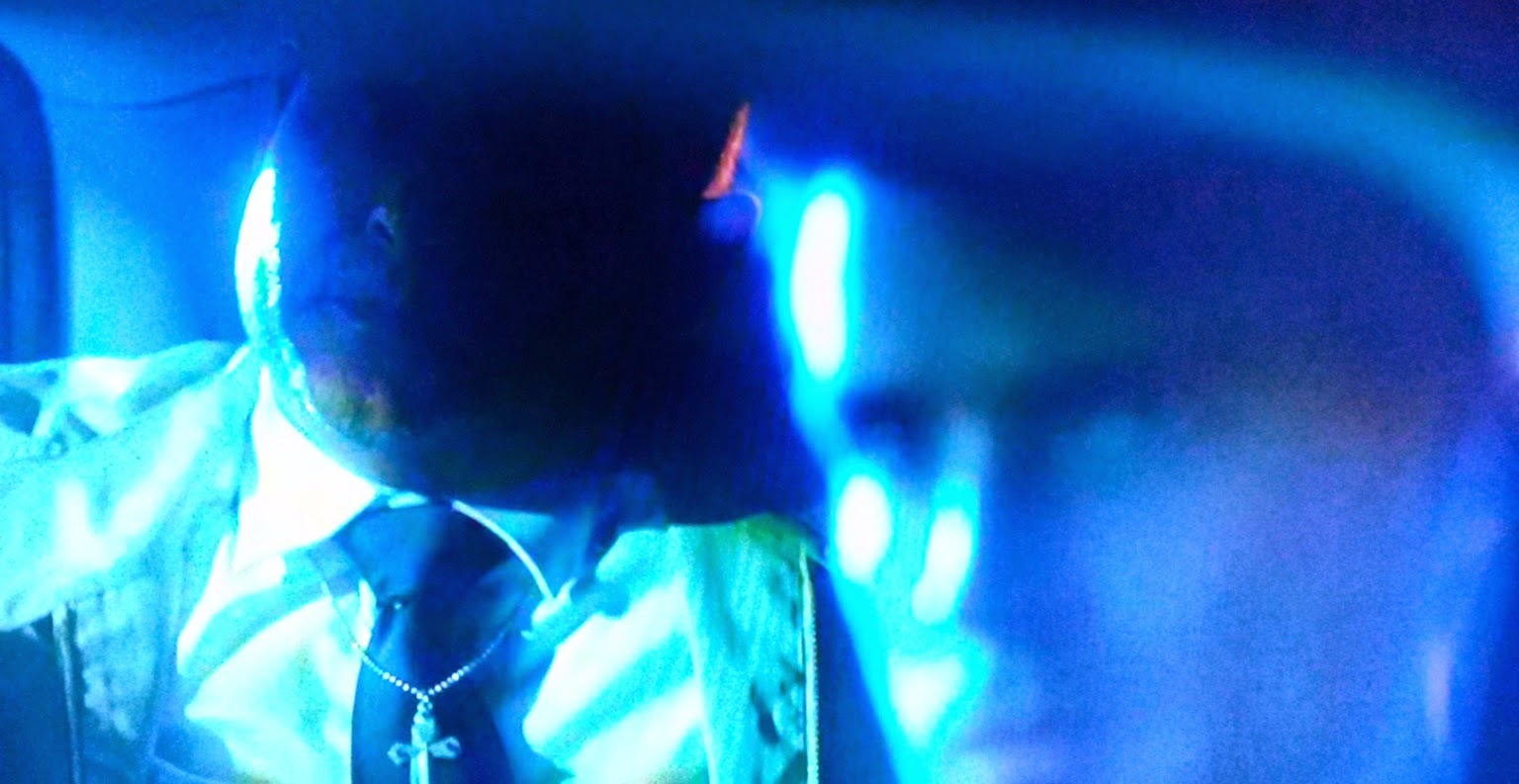 One last thing.  We get a quick look at a "Family" member of Zed's.  Note the cross around his neck. 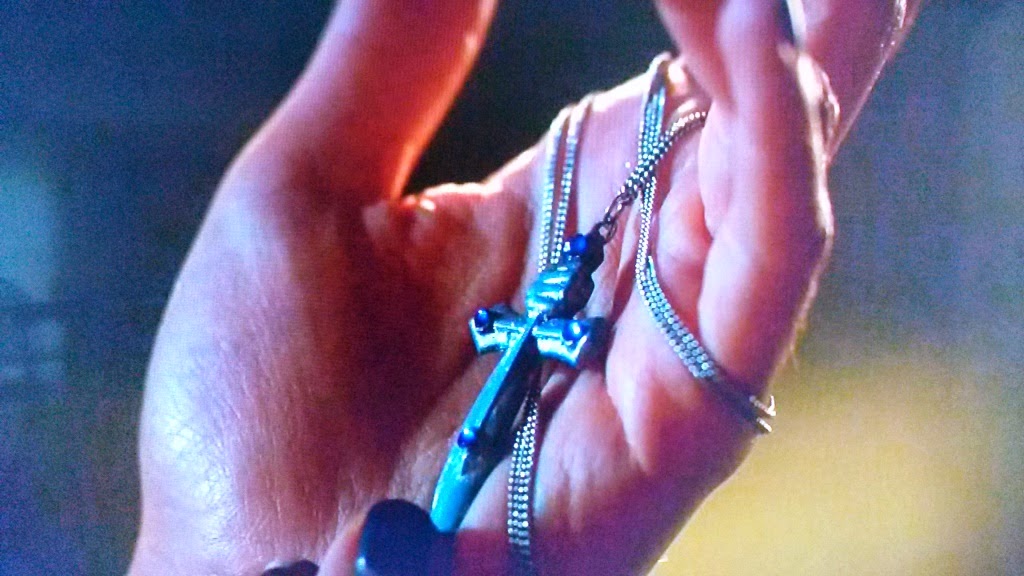 Just a few episodes earlier we got a look at the cross Zed wears around her neck.  They look the same to me!

Is it a family symbol that unites their religion and their ability to foresee the future through visions?

Whatever it is it means trouble for Zed. 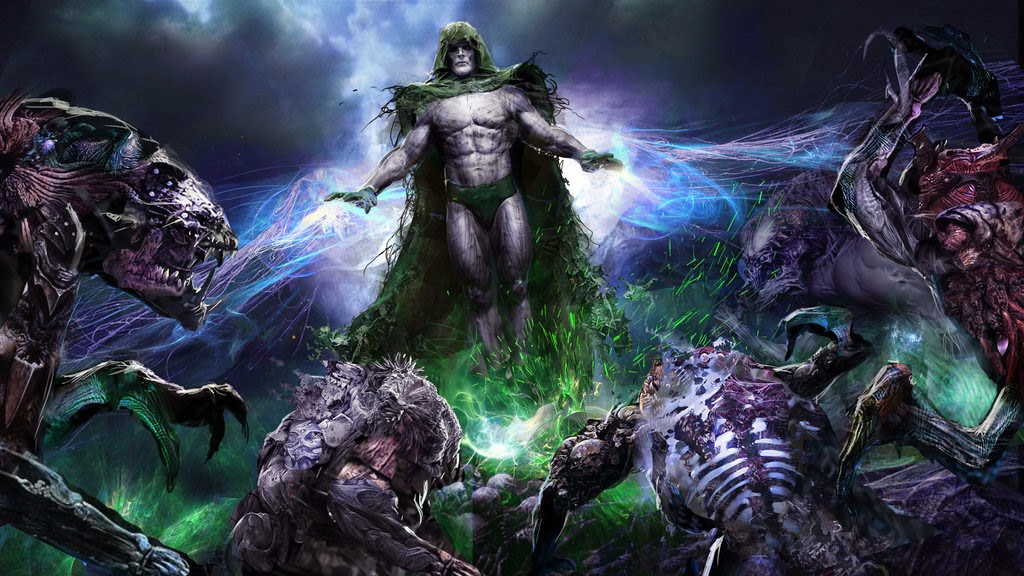 Touch her and beware the wrath of the Spectre!!!