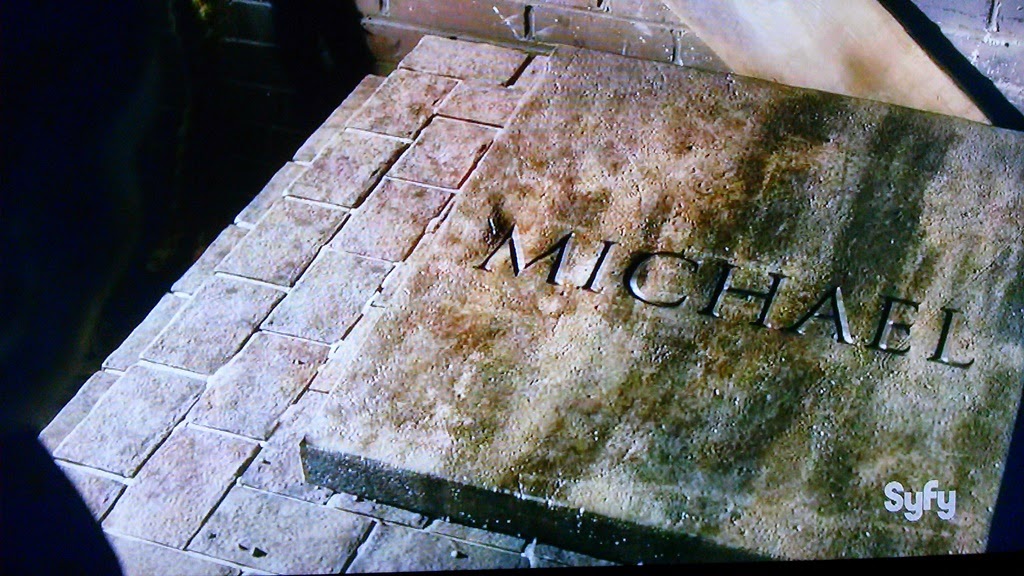 Yes, go in peace Michael but whatever you do, just go.

And go he did. 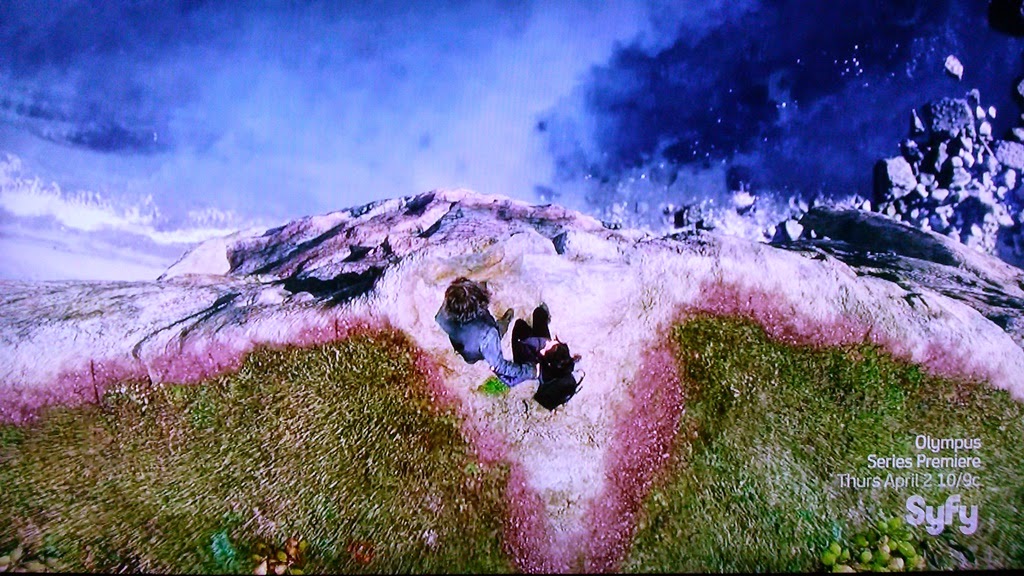 Michael ended up going for a little swim but not before he tried to compel Julia to test the waters first. 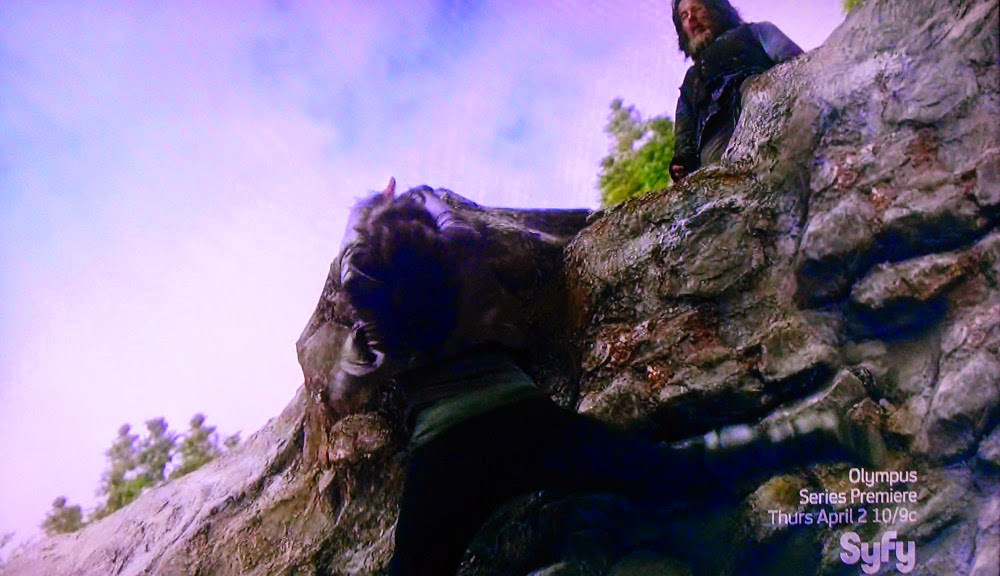 Michael, as usual, was bereft of gratitude to the person who freed him from 30 years of solitude.  He seemed a little "mad" as he tried to toss Julia over the cliff side.  I suppose, as always, he had to be the only Immortal in town.

Wait, did Julia reveal to him she was an Immortal?  Maybe Michael was just plain crazy.

Anyway, as I mentioned Michael ended up going for a little swim. 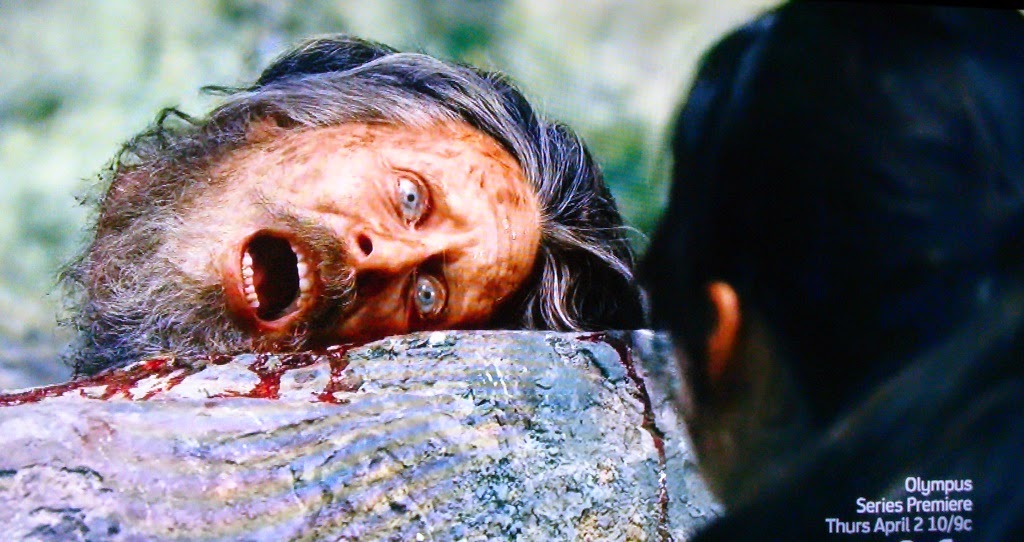 Well, almost all of him went for a swim.  Judging by the look on his face the water must have been a bit too chilly for his head.

How interesting Helix has decided to end Michael's story just over halfway into the season.  During Day 8 of the CDC intervention Michael was still in control of the compound during the post "thinning" period. 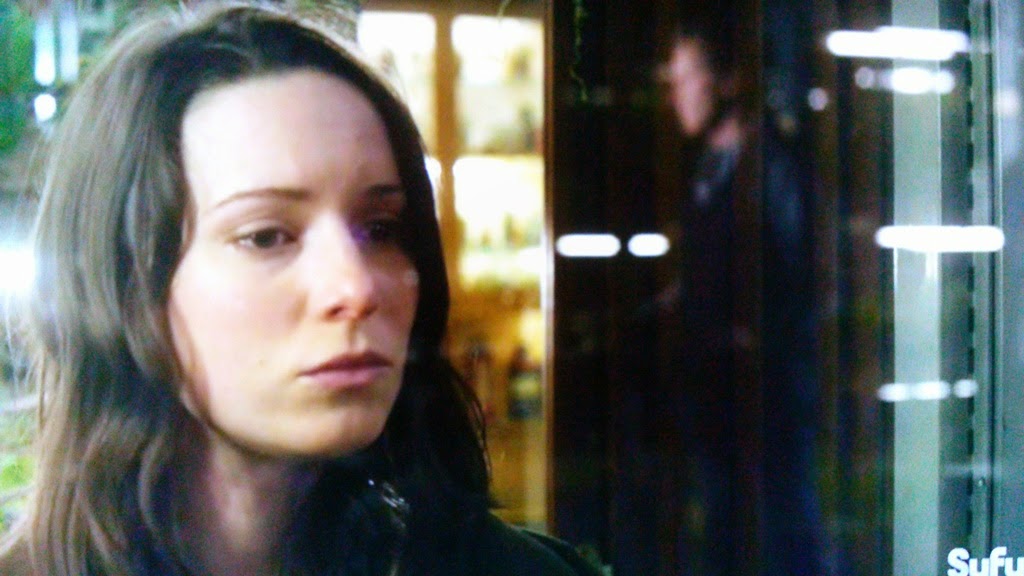 He had his main point of opposition locked up in a glass case and was just short of being in total control.  His crop was thinned and he had his loyal henchmen still at his side.  The only thing that stood between him and total control was the CDC bunch and they were next on his list. 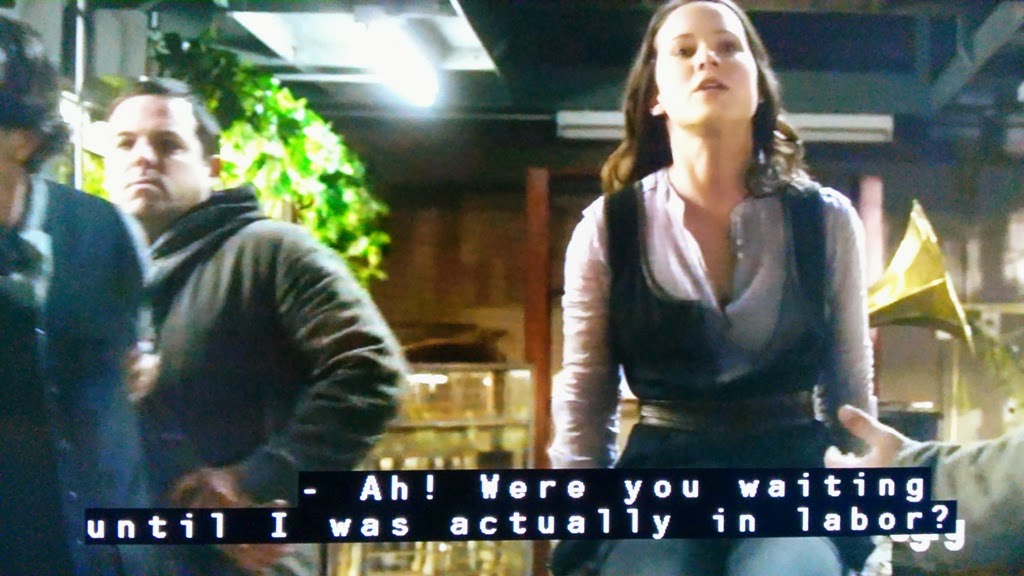 Alas for poor Michael, his weaker nature took control.  Amy acceded to his "planting ritual" plan and he freed her. 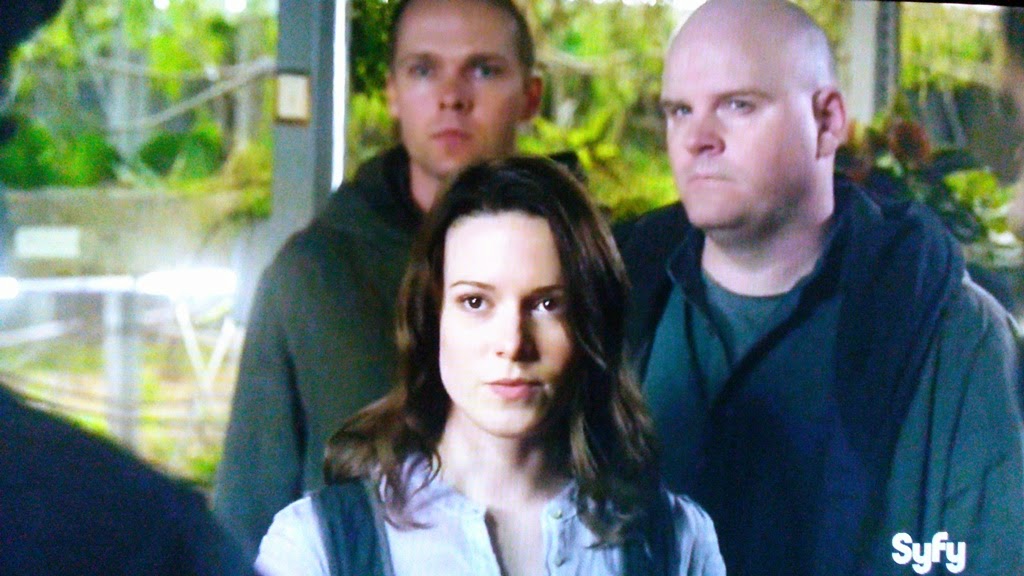 That turned out to be a bad move as Amy had Landry and his crew in her apron pocket.  The seductress had won the day. 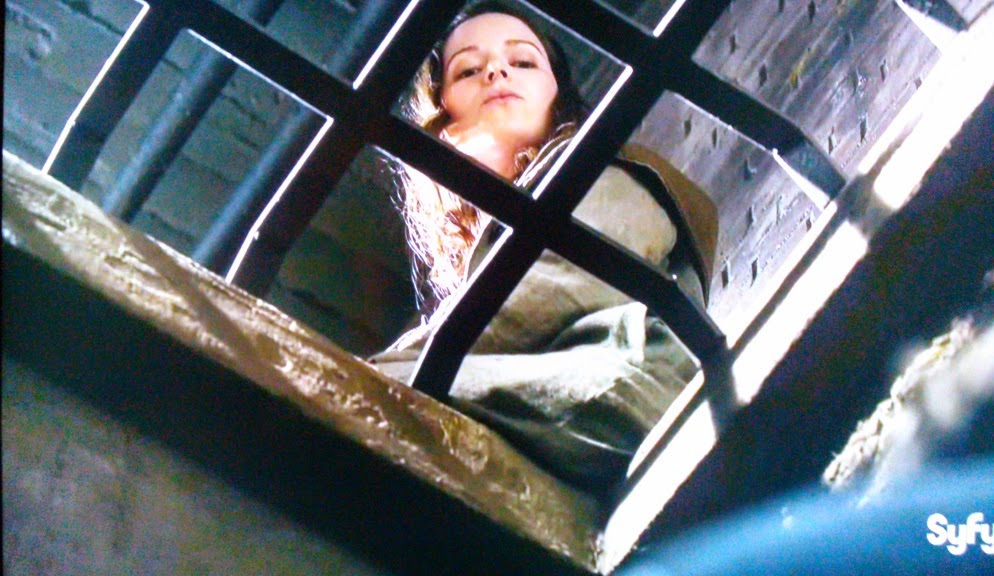 What Amy lacked in years she more than made up for in guile.  (It makes you wonder what she had planned for Kyle if he succumbed to her temptation.)  It was a stunning reversal. 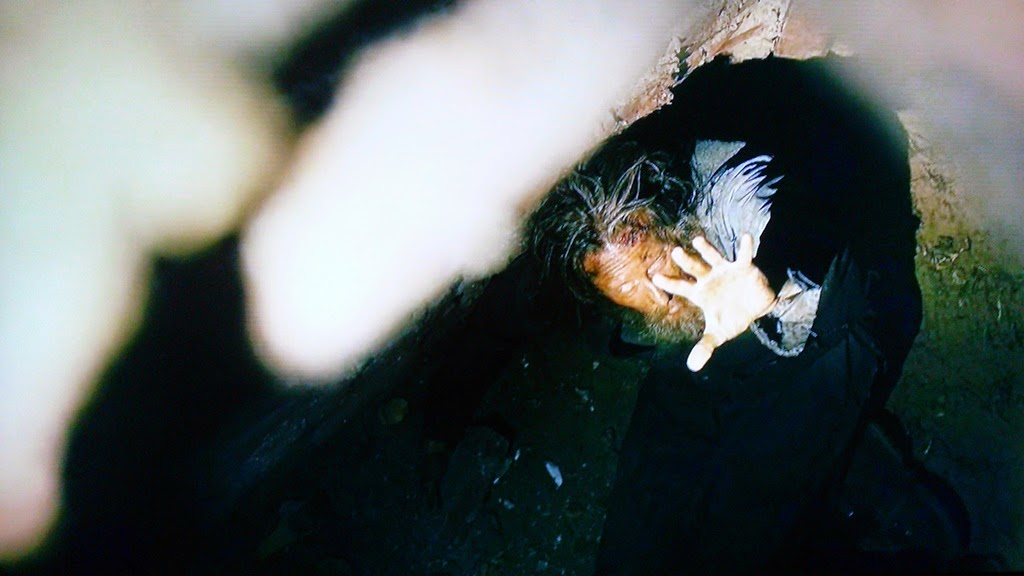 Michael was not to see the light of day for another thirty years.  When he did, the madness that drove him to perpetuate a lineage of servitude had not dimmed. 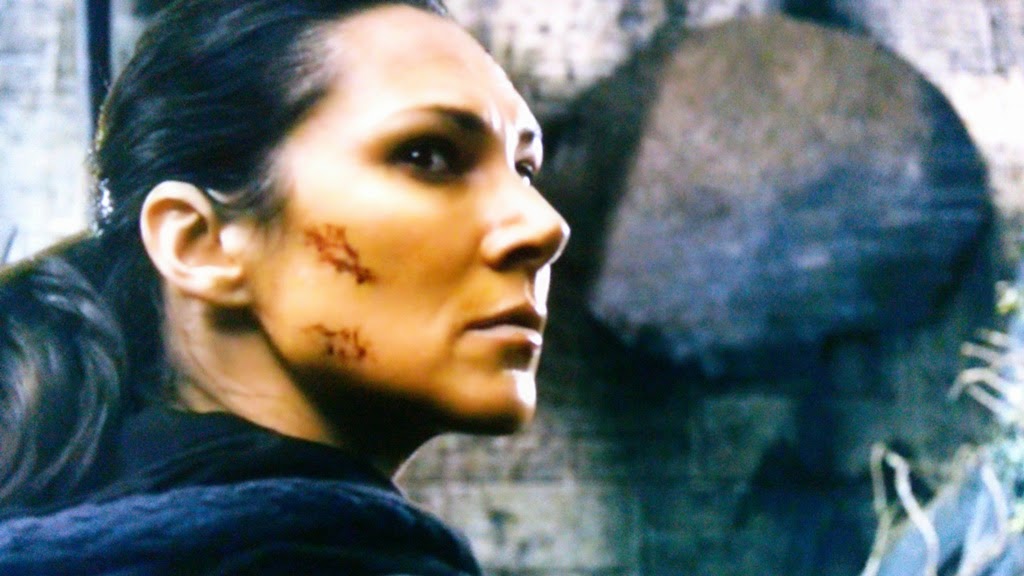 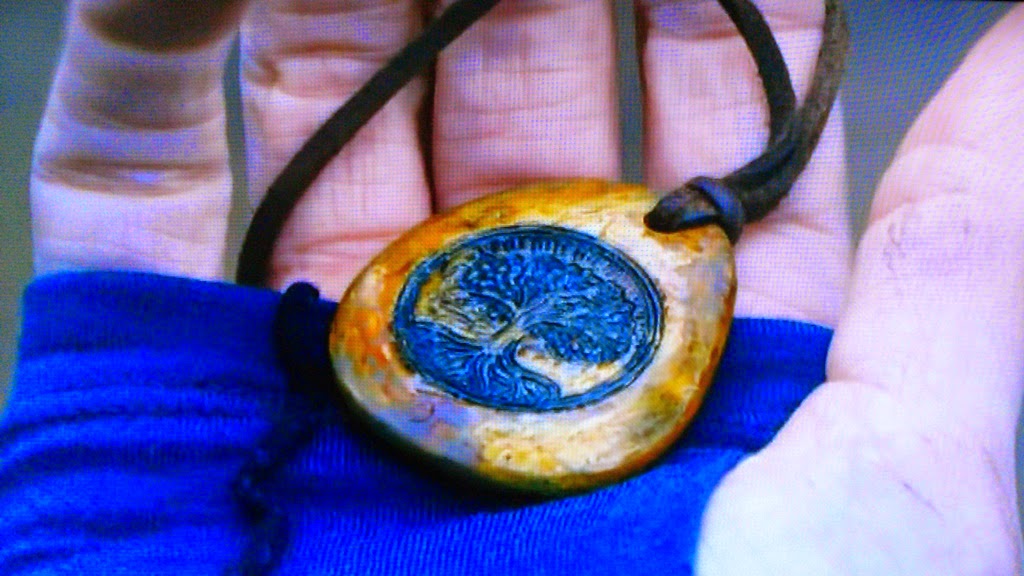 Julia was in the process of divining the Island's secrets in the aftermath of her Hatake and Caleb encounters.  She was still in possession of the "tree amulet" that matched the wall hanging in what was once the great hall.

I haven't ventured to guess the meaning of this tree symbol but I suppose it has something to do with lineage such as in the "family tree."  If you look closely however you can see the tree's roots are almost as developed as it's branches.  I wonder if it represents what is "above" and what is "below."  Both connected but existing in two different worlds.  Hopefully it is a clue as to where the Immortals are from. 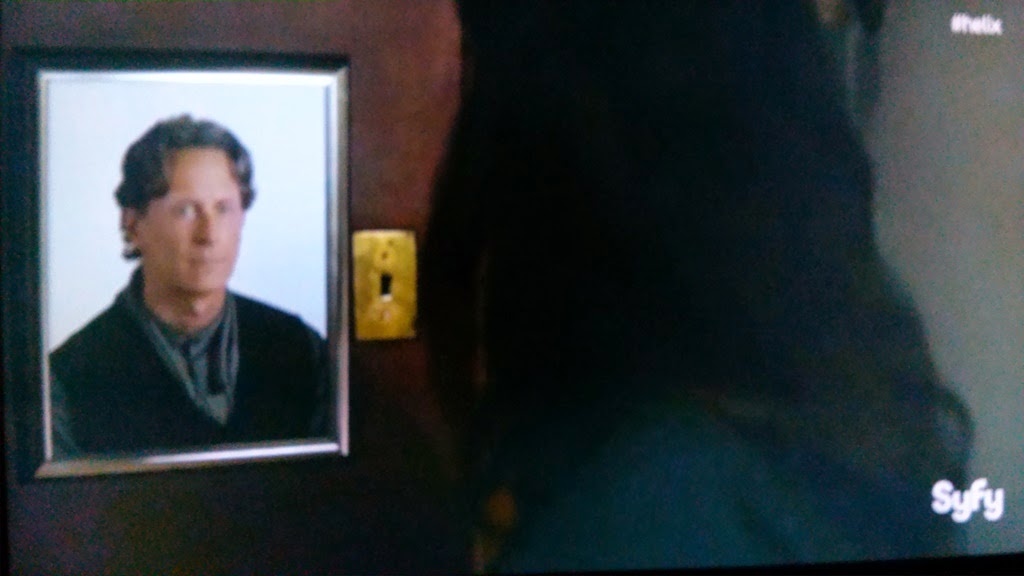 Whatever the symbology of the tree, there is one branch that will no longer bear fruit.  Leave it to the sardonic Amy to post Michael's lone portrait on the wall.  And to think she was once the apple of his eye.

There were two more developments that shook the Helix world to its core so let's get to them.

The Return of Caleb 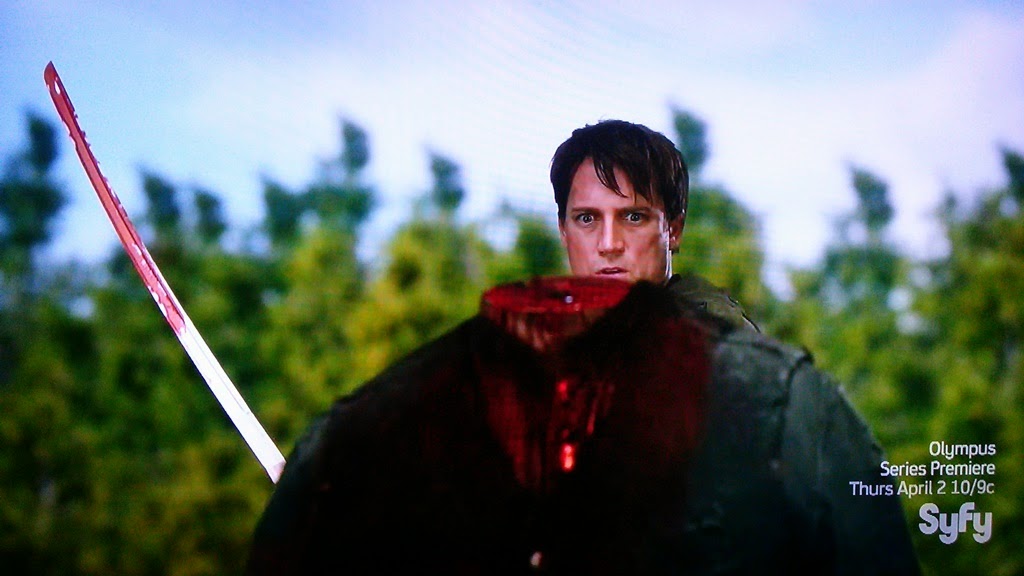 Okay, we might see his return as earth shattering but I bet Julia is pretty happy to see him back.  As Caleb observed, the sword still works and once again we see an Immortal lose his noggin.

I wonder where he has been off to?  If he understood the meaning of the "Densho" sword, what kept him in the vicinity of Julia?  You'd think he was off to uncover some mysterious secret that the sword lent itself to.  Did he figure it out or did he have a change of heart and decide to shadow Julia?

He seems a decent sort although a bit spooky.  He knew of Julia being an Immortal and that seemed to put him off.  Yet, he warmed to Julia and took her in as a guest and not a prisoner. 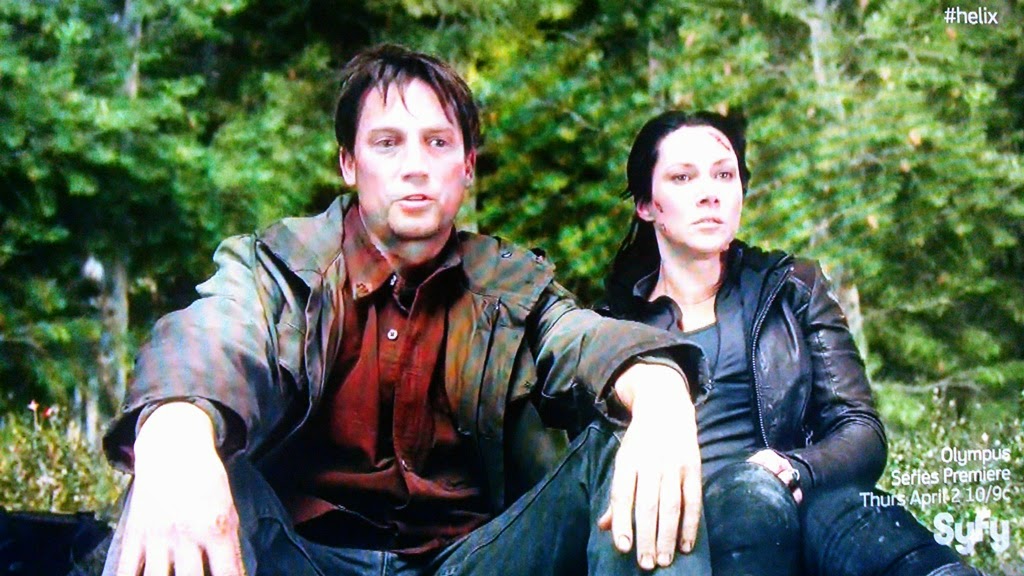 It seems the two have bonded now.  Julia certainly owes Caleb and for his part I think Caleb needs Julia.  Perhaps the mystery of the sword was just beyond Caleb's understanding and he returned to Julia in order to forge an alliance to solve its secrets.  Good thing! 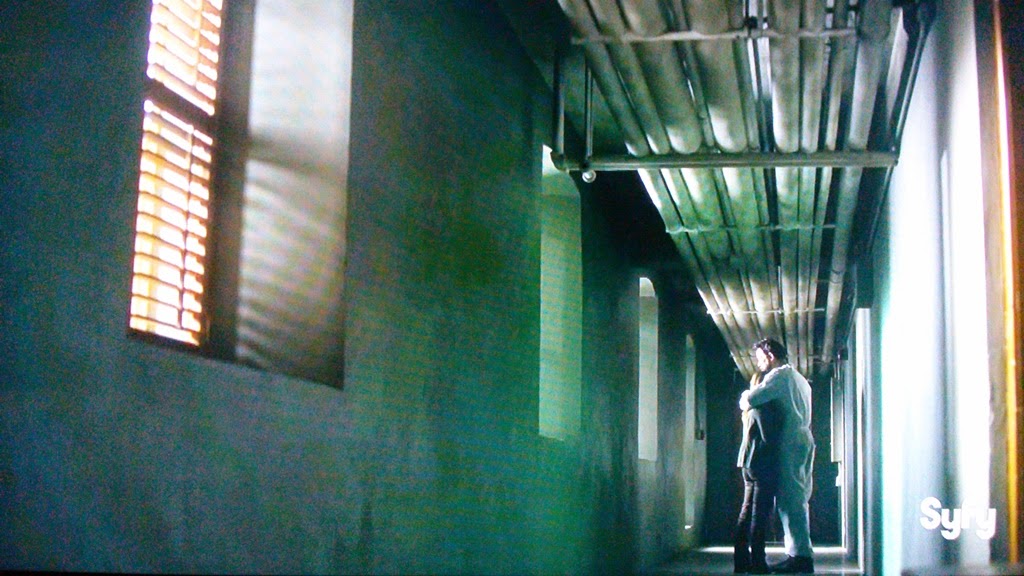 Sarah has been having a little man trouble.  It was nice to see her reconcile with Alan.  I think a lot of us see Alan and Julia as the natural couple but there is something to be said of the relationship between she and Alan.

They went from mentor and student to partners thrown into the hellish caldron of Arctic Biosystems.  The strain got the better of them and it eventually produced a child.  Well, an unborn child.

I don't get the impression that Sarah and Alan think of their coupling as a meaningless and random moment of passion.  The two actually have a lot in common.  Especially their propensity for throwing caution to the wind in pursuit of a higher calling.

Is there anyone out there that thinks they are callow and or selfish?  To me, they seem the polar opposite. 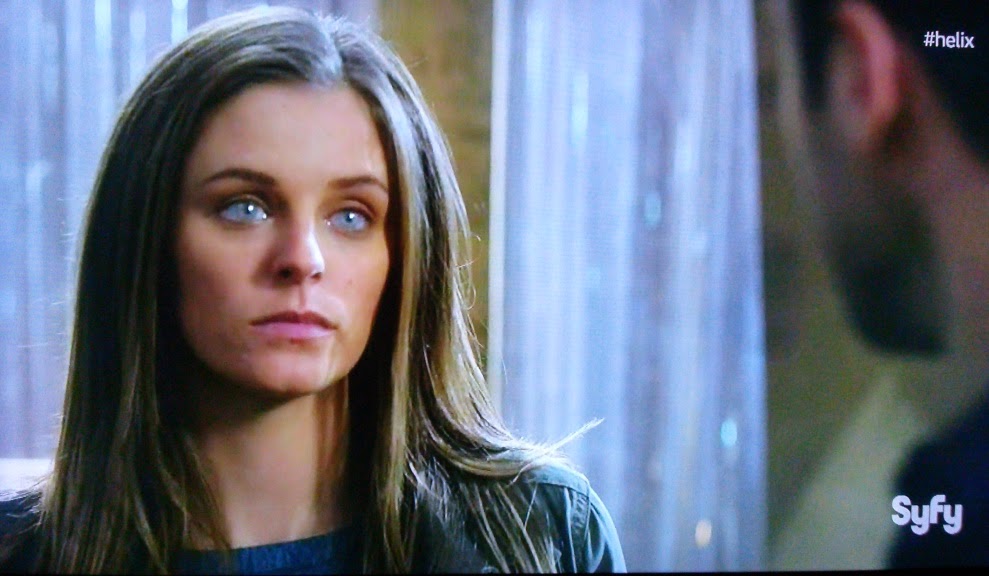 Man problem number two was solved when Sarah revealed to Kyle she is an Immortal.  Good thing Kyle is out of gum or he might have choked on it.  Kyle is pretty much a smart cookie also and this reveal will go a long way into explaining her "Hot Zone" temperament. 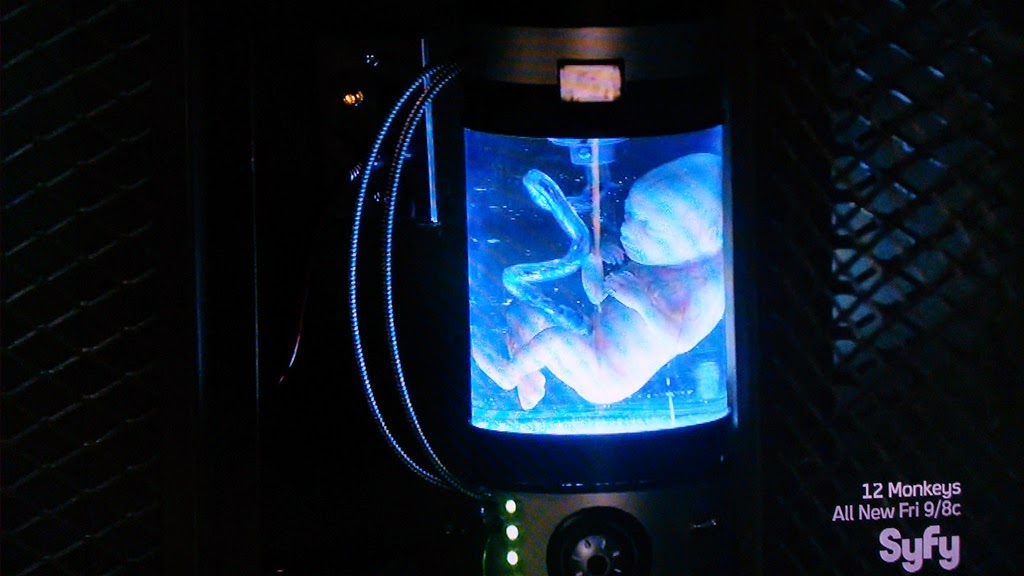 Here's the big kicker in Sarah's storyline.  The fetus is alive and well and as we see, it is rather well developed.

What does Amy want? 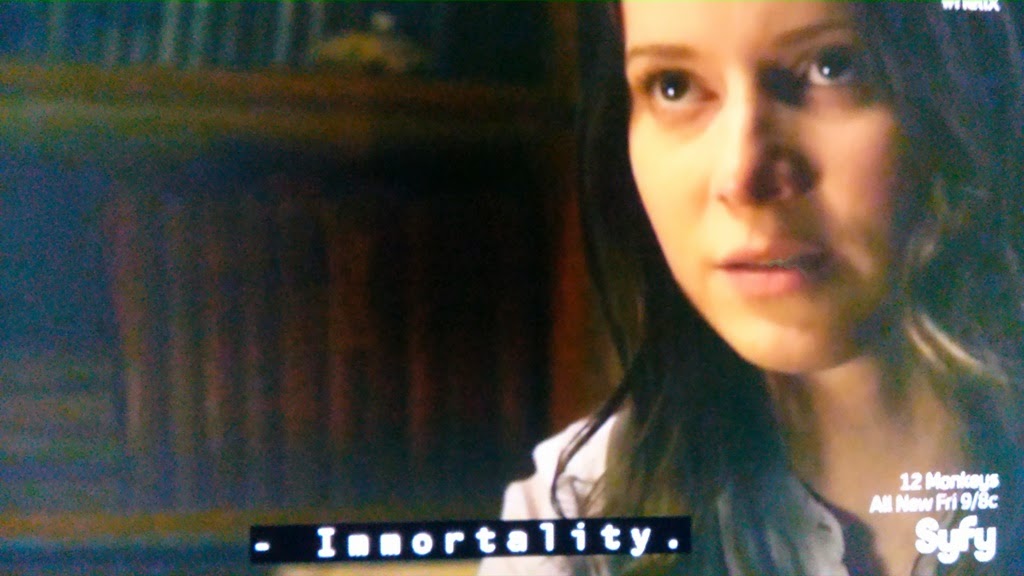 Of course she wants Immortality.  She often cited Michael as a god now she can be one too.

Did Helix decide to jettison Steven Weber in favor of Alison Louder?  She can be delisciously evil and they should create some promo art work of her standing before the ruins of the compond holding an apple with a bite out of it.

I think I just scared myself.

I thought for sure Weber would last the whole season but Helix does love its stunts.  Having Michael buried alive only to see him return in time for his cranial removal was one of their better ones. 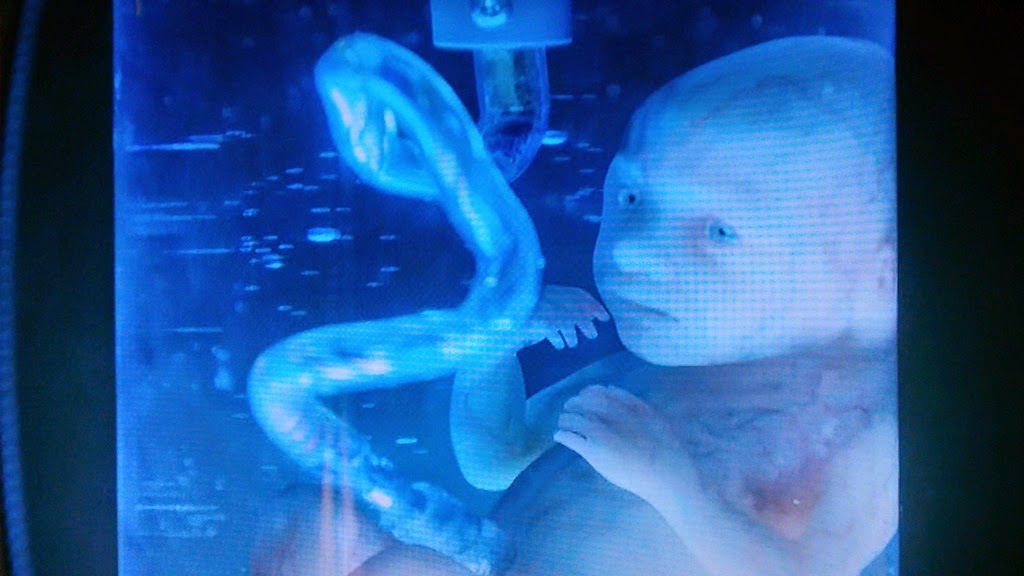 The apple didn't fall too far from the tree in relation to Amy and Michael.  As "brilliant" a geneticist as Michael was, I think we've seen in Amy a natural inclination for wizardry in the lab.  She has the silver eyed little dude as hostage and with her power in its ascendency I'm thinking she will compel Alan and Sarah into giving her what she wants.

I wonder if this will be the opening for Hatake to make his appearance in this timeline.  He managed to make Julia immortal in order to save her and then in turn, the same was done for Sarah.

You know what?  I think we just took a big step towards the meaning of the Densho sword. 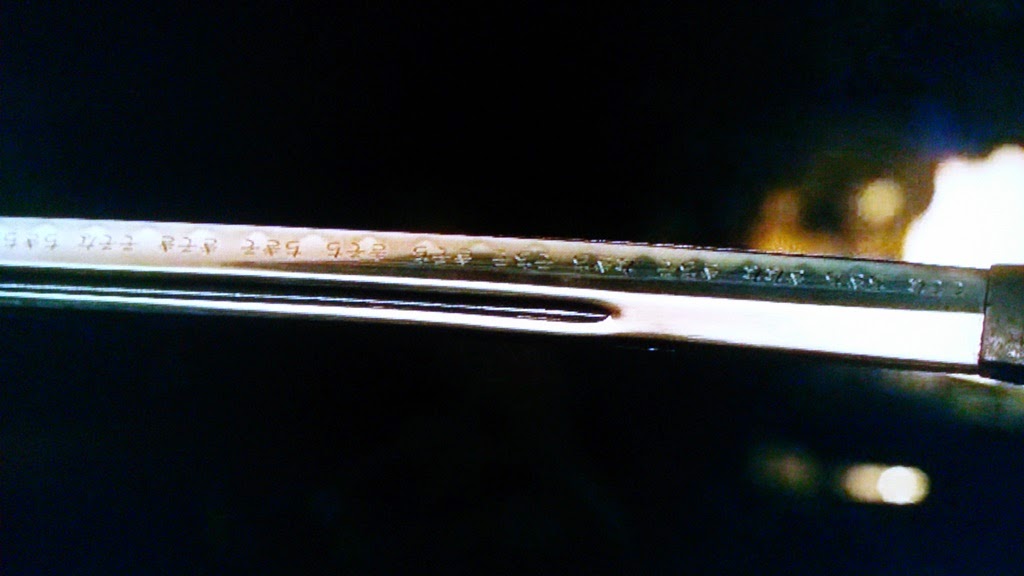