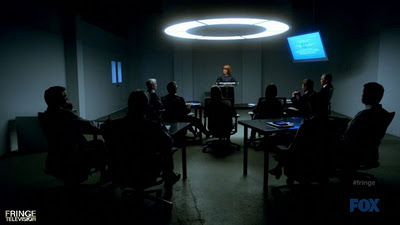 In the last episode of Fringe, "Subject 9" (4.04) we got a our first look at Nina Sharp as she presided over a meeting at Massive Dynamic where she ominously declared, "We create technology, how it is used is not our concern, we just own the patents."  Before I get to that forbidding statement; I'd like to speak of the set design itself where the speech is made. 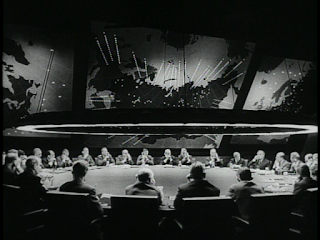 To me this a homage to the classic war room setting featured in one of the great dark comedies of the 1960's, "Dr. Strangelove".  Like the Stragelove setting, Nina holds court beneath a circle of light and not coincidentally both rooms are filled with iniquitous characters equally bent on their nefarious plans for the world. 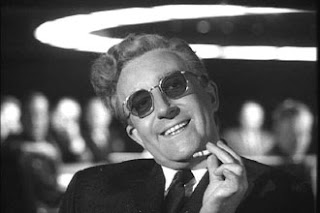 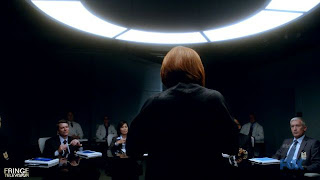 Like Dr. Strangelove, Nina is not concerned with the collateral damage her plans might produce.  The good Doctor (a left over from the Nazi era) didn't mind a little thing like Armageddon that his doomsday device would bring.  For her part, Nina relishes in her creations while dismissing the consequences and savoring the reward the dividends of her patents will bring.  This is what I alluded to above when I spoke of her "Forbidding statement".
The theme of Dr. Frankenstein and his monster has been consistent in the early part of this new season of Fringe.  In her book, "Frankenstein, the Modern Prometheus" Mary Shelley warned of the penalties of not staying responsible towards your inventions.  It seems as though Nina has not heeded the advice of this classic book and like Dr. Stangelove only bad things can come of this.
For fun I thought I'd also take another look at the "War room" setting as it appeared in the recent movie, "Watchmen".  For those who saw that movie we know nothing good came of that little meeting also.  Armageddon anyone?