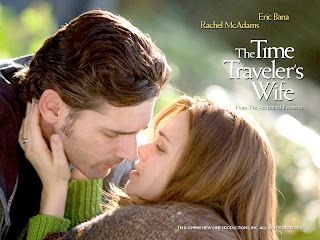 Another episode of Fringe and another homage to a book/movie.  Well, not necessarily a homage but the relationship between the book/movie The Tme Travellers Wife and the Fringe episode "And Those We Left Behind" is pretty unmistakeable.  I must confess I never read the book but I remember it being a pretty hot property.  It was so popular that it becoming a movie was mere eventuality.

The similarities between the movie and this past episode of Fringe are quite salient.  The most obvious of course being time travel but perhaps the most interesting is the issue of genetic defects.

In The Time Travelers Wife the protagonist, Henry, is afflicted with a genetic disorder that causes him to jump through time in a unpredictable fashion.  His wife, Clare, has to deal with the vagaries of this affliction and off times has to stand by helplessly as her husband fashes in a out of existence. 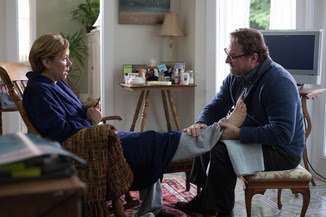 Fringe provides an interesting twist on this premise.  The husband, Raymond, is a time traveler yes.  But it his wife that has the genetic disorder and it is the scourge of Alzheimer's disease.  In the movie Henry can't help but travel through time but Raymond does so deliberately in order to spare his wife. Both couples have to bear the agony of separation and both use the strength of their love to keep them together.

It's interesting that the book was seen as an "elegy to love and loss" as noted by critic Charlie Lee-Potter.  I say so because in the Fringe episode there was such a finality to the relationship between Raymond and Kate.  Ironically they are still together yet separated by the loss of Kate's faculties.  For Henry and Clare the opportunity to be together was fleeting and always precious.  Sadly, for Raymond despite being together he felt they were separated forever due to his wife's tragic disorder.  Hopefully that elegiac message left by Kate in her notes will give Raymond the perspective he needs.  In the movie Clare had to move on with her life now Raymond must learn to do the same.

The concept of free will comes into play in both of these stories and God know how Fringe wrestles with the issues of will versus determinism.  The character of Henry had the luxury of traveling through time and observing its consequences.  Raymond was equally gifted as he kept "resetting the clock" to chart his course.  Yet both arrived at the same destinations despite their best efforts to change the outcome. 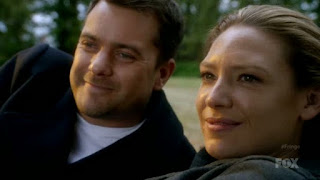 Naturally, all of the above can be applied to the plight of Peter and Olivia and I suppose that is the point of this entire exercise.  Despite the best efforts of Peter he may be doomed to spend the rest of his existence separated from Olivia.  So close yet so far.  Perhaps Peter should welcome this added dimension to his relationship with Olivia and in time he will accept it.