Prof. Moriarty in the Parlor with a Gun 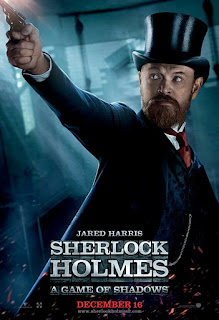 We are just a month away from the release of "Sherlock Holmes A Game of Shadows".  Trailers, teasers, set pictures, and as we can see from above, movie posters have been flooding the inter-webs to hype its imminent debut.

Like any blogger out here in the blog-verse I have a problem with it!  (We are so negative.)  OK, just about everything is fine it's the above poster that I take issue with.  When I first saw this depiction of Prof. Moriarty as portrayed by supremely accomplished Jared Harris (see his work in Mad Men and Fringe) I was taken aback by Moriarty's use of a gun.  Surely the Napoleon of crime doesn't have need of firearms.  I nearly tumbled down my own personal Reichenbach Falls as I thought director Guy Ritchie has taken this character to a place where he doesn't belong.  As I sat aghast and alone in my empty room I thought, "Surely Moriarty is shooting out some light fixture or taking aim at a switch in order to cleverly throw it."  "Please don't tell me he is in some running gun battle with Holmes and Watson that is straight out of "Lock, Stock and Two Smoking Barrels".

Fortunately my fears were assuaged by Jared Harris in an interview with ComingSoon.net as reprinted by the Sci-Fi site io9...

"The whole story is a plan or plot that he has set in motion quite a long time before the story starts. There's a tremendous sense of motion to the story and Sherlock Holmes is arriving in the end stages of this plan and he's catching up to it to thwart it. One of the things that I was interested in about Moriarty was how he's so manipulative that he doesn't need to commit violence himself or kill people. He can get everyone to do what he needs to do and sometimes they don't even know that they are being manipulated by him. They aren't even aware that they are caught in a stratagem that he has... That's quite chilling, to have someone that understands people that well. He can have a letter arrive on the wrong day and it's going to be enough that it will set somebody off or whatever it is."

What a relief.  That is the Prof. Moriarty we all know and love. I'll be interested to see how the Moriarty  iteration is served in next years "Sherlock" featuring Benedict Cumberbatch in the title role.  Hopefully the same respect that Ritchie and Harris extend to the Professor will be granted toward that Moriarty as played by Andrew Scott. 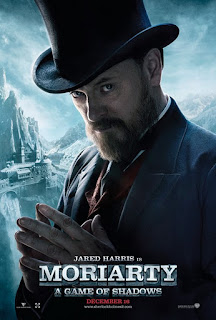