The Return of the iconic Aston Martin DB5! 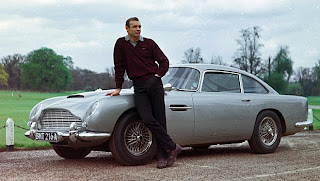 Reports have circulated recently that actor Daniel Craig has been seen driving about London in a classic Aston Martin DB5.  Authoritative James Bond fan-site MI6-HQ.com was able to get and post a picture of the illustrious car with Craig behind the wheel.  See below. 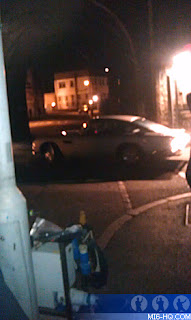 Speculation has been rampant as to what role the car is playing in the Bond flick, "Skyfall".  Fans of the first Daniel Craig Bond film, Casino Royale,  will remember that 007 won the classic car in a game of cards with the character of Alex Dimitrios.  A Pyrrhic victory to be sure as Bond paramour Solange met an untimely death at the hands of Dimitrios a short time later. 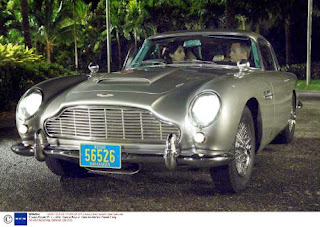 What's exciting about the reintroduction of the DB5 is not only the continuity of this being the signature Bond car but the private vehicle of the current Bond himself.  Bond could drive anything he wants especially when it comes to the company dime of MI6.  So why resort to driving his own personal car?

Aside from the obvious answer that it is just plain fun and who wouldn't want to drive it?  I think the real answer lies somewhere into the plot mystery that Judi Dench's "M" has suffered some sort of personal crisis in "Skyfall" and its something that has shaken MI6 to its very core.

I'm speculating that 007 is pursuing an independent investigation into the downfall of M and the use of "company cars" is restricted to official MI6 only hence the use of his own car.

This is all well and good but recently the casting announcement that "Q" will be rejoining the series has added to the mix.  Q will be portrayed by actor Ben Whishaw who is known for such movies as "Perfume", (see photo below) "Bright Star" and alongside Daniel Craig in "Layer Cake". 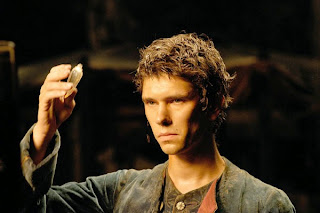 This is where I'm going to stick my neck out a little and predict that the new and callow Q will be secretly recruited by Bond to make certain modifications to his DB5.  The new Q may be impressionable and Bond may have to "convince" him to help Bond surreptitiously in his mission to clear M.  As Bond will not have the use of any "company  cars" his own private vehicle may need some certain enhancements in order to take the fight to the enemy.

What enhancements may these be?  Well, an ejection chair, a bullet proof shield and machine guns might prove to be too camp for today's realistic Bond.  But I don't think it would be a stretch to see an oil slick ejector, bullet proof glass and body armor plus the latest in electronic gear.  There may even be a little humor introduced as the puerile Q may be a little recalcitrant at first but dive headlong into modifying the DB5 once Bond gives him carte blanche to do what he wants to  the car.

Historically, Q has often been a font for dry humor in the Bond movies and may be a fun twist to see some youthful enthusiasm by the new Q including a little geeky fumbling.

As you can see by the video below Q never loses his touch even against the formidable Sean Connery Bond.


007, the DB5 and Q, now there's a recipe for intrigue in the new movie.  Maybe Bond will reward Q by inventing a Martini in his honor.  (But let him drive the car?  Doubt it!)