If there is one thing the people at Fringe can do, its to make a killer promo. Spoilers ahead if you choose to view this video.

Let's take a look at this quick video and dissect some of the more singular aspects of it.

This quick cutting montage of preview clips is a major tease.  The tension is instantly palpable by the tick tock like sound structure that accompanies the images.  This countdown like sound effect is accentuated with an electronic gong like bell that makes it sound like time is running out and the hour has been struck where there is no turning back.

The theme of the upcoming second half (two thirds?) of season four is laid out by a voice over  by Josh Jackson as Peter Bishop when he says, "All I want is your help to get me back to where I belong".  It's quickly followed by images of some of the major Fringe players and this may provide us with a clue they may be directly involved in Peter's quest for his "return".

We see Peter facing off with Walter followed by Olivia Dunham, Peter himself, Walter, what seems to be a Shape-shifter, Lincoln Lee and then Walternate holding a cylinder with what looks like a Shape-shifter chip.  How are all these images interconnected?  Are we to understand Peter cannot complete his quest without their help?  Are they all directly involved with his return and do the Shape-shifters provide a means to an end or are they an obstacle?

What comes next is a series of action sequences replete with people running, a car chase and a serious looking Agent Broyles from the "other side".  Salient amongst these images is a billboard warning the general public to "Be vigilant. Report signs of abnormal activity to Fringe Division."  Pictured on the billboard is the Fringe event vortex in what I think was the East River although it might be the Hudson.  The message here is that it's clear a lot of the activity for this second half will happen in the Red Universe.  This is further exemplified by a quick shot of the Bronze like Statue of Liberty.

Oh, but just prior to that we get a look at the Opera house and a portal opening up to another dimension.  Who are the two gentlemen moving through the portal?  They look a lot like Lincoln Lee and Peter.  Since they are not using Liberty Island to cross over this may be a clandestine mission.  The Opera House may have been chosen for its inter-dimensional soft spot quality.  Notice the run down look of the Opera house they are standing in and the clean polished look to the same seats on the other side.  But who makes the device to cross over?  Peter?  Is Lincoln Lee secretly abetting him?

Several more quick shots follow.  The "Orpheum" sign for the Opera House is plainly seen.  More Shape-shifters are seen including one that may be undergoing some kind of incision.  Retrieval of a disc perhaps?  Altlivia Dunham appears as well as a mystery man in shadowed profile and Walter looking into a microscope.  We see a semi-automatic firearm that serves to underscore all the danger involved.

All of this may just be used a series of dramatic devices to move the teaser along.  Not long after we see the gun we see Peter held at gunpoint.  Peter taking risks and pushing the boundries to get back to where he belongs?

What follows next is very intriguing.  We get a map of what looks like Fringe events AND THEY ARE MOVING!  Tracking Shape-shifters maybe?  Peter is on the run and he is armed.  We see a lab like storage area full of people sized tubes replete with, gulp, people in them.  Note that all this is hued in blue.  I'm guessing this is some grand experiment by our Walter in the Blue Universe and it may have to do with his experiments into re-animation that started with bringing the Dove back to life in the first episode of this season.  I also wonder if this is Walters own effort into making some sort of undead shape-shifter from the victims of Nadine Park and her minions.  Very Dr. Frankenstein like.

Walter is pictured next.  He's smiling and he seems to have his arm around Gene the cow.  The use of cow milk is crucial to gene splicing experimentation and I deduce from this some sort of breakthrough by Walter into his re-animation experiments.  We get quick shots of Peter (as prisoner?) and Lincoln.  But most shockingly of all a disfigured hand slapped against glass.  Just below the hand we see a white lab coat sleeve such as the one Walter has been wearing throughout this teaser.

Has Walter experimented on himself!  Did he go too far and grossly transform himself???!!!!

This may be the saddest development of them all in the second half of this season.  Walter, the victim of his own experimentation.  Playing God may have ultimately doomed this beloved character.  Does he deserve this?  Poetic justice?  Below is a screencap of the scene.  Not exactly my forte but it could be an important development if not a heartbreaking one. 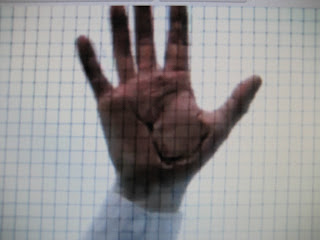 More action sequences ensue predominantly involving Lincoln Lee as he quickly becomes an important figure.  Orla Brady appears, she's Peter's mother of course, but what is her role?  Does she figure in Peter's decision to get back to where ever he believes he's from?
More quick cut action follows.  We catch glimpses of vehicles in pursuit, Altlivia with a gun, a portal opening, Olivia in repose, Lincoln Lee, the Observer (finally!) and a bitter looking Walternate as he seems to be examining a possible Shape-shifter chip.
Here's where the pace picks up dramatically.  Altlivia, Charlynate and Lincoln hold what looks to be Peter and the Blue-verse Lincoln at gunpoint.  They seem to be cornered and judging by the Red-verse Fringe divisions alarm Peter and Lincoln must be deemed armed and dangerous!
Suddenly the words, "The Wait Is Almost Over" flash across the screen intercut with familiar faces.  One of those familiar is quite significant and it is someone we haven't seen in a while.  I won't spoil who it is here but let's just call him the "Napoleon of Crime". Sherlock Holmes and movie fans know who I am talking about and it is a very exciting development.
The montage ends with Olivia behind the wheel and a voice over is heard, "Not everything is as it seems".  It sounds like Walternate because it is so dead pan.  But we can't rule out Walter either.  The significance of that statement is a bit mind bending.  After all those wonderful images we were made party to we are then told they may not represent what we think.
That's why they call these things teasers folks!
Lastly, I love the JJ Abrams typical crossover reference to his other work.  JJ directed the newly rebooted Star Trek franchise.  One of its trailers featured Eric Bana's character, "Nero". In the teaser trailer for that movie he said, "The wait is over".  Typical JJ, there is always a connection!  So what are your thoughts?  Excited?  Did you pick out anything I might have missed?  Let me know!
Email Post
Labels: Blue Universe Dr.Frankenstein Fringe Lincoln Lee Orla Brady Peter Bishop Phillip Broyles Prof. Moriarty Red Universe Shape-shifters The Observer Waler Bishop Walternate