Fringe and the Wheel of Life. 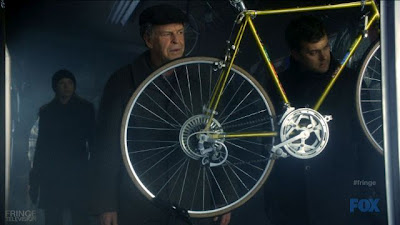 I 'm catching up on a few things that intrigued me about Fringe and one of them was this screen-cap from the episode, "Welcome to Westfield".  Quite a few bloggers and Fringe fan sites associated the picture with the "Wizard of Oz" movie and how it was like the bicycle ridden by Miss Gulch as she sailed past Dorothy's room during the tornado. Certainly it is no secret that the principle characters of Fringe have been identified with the main characters from Oz.  That's perfectly reasonable but I am hoping there is a deeper meaning behind it. 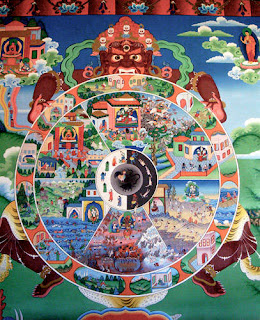 We all have learned from Fringe, especially this season, that things have a cyclical nature.  What comes around goes around!  The most recent episodes have particularly mirrored what we have seen in season one. (Hello David Robert Jones and the light box.)  So with that in mind I think positioning our main characters near that wheel is more evocative of the Hindu and Buddhist Wheel of Life.

The Wheel of Life for these religions represent the cycle of birth, life, death, rebirth and reincarnation.  We've witnessed what could be called Peter's rebirth earlier this season and even the reincarnation of Olivia as she professed to remember everything the Blue universe Olivia experienced.

Hindu religion sees the wheel as the symbol of continuous existence something Peter can attest to.  He was wiped clean from the slate of life only to written in again.  The wheel also is aligned with the concept of Karma the actions committed during your lifetime that set your destiny for the future.  Even though Walter often beseeches God of the Christian faith he seems to be trapped by his actions into constantly repeating his mistakes and always trying to fix them.

It is the Observers however that are trapped in the cycle of Karma.  Again and again poor September has sough to right his wrongs committed by his acts, deliberate or otherwise.  He never seems to get it right and seems doomed to be constantly chasing his destiny and those he inadvertently manipulated.  Do you think the writers of Fringe are cognizant of this phenomena?  I do.  They may even choose to wrap up this season or even the series of Fringe by having Walter, September Peter and Olivia finally braking their cycles and move on to their true destiny.

In breaking the cycle of Karma takes an appreciation of enlightenment.  Only then can you move on to a heightened plane of enlightenment or Nirvana.  You free your ego-consciousness and are released from the Earthly plane of existence and are no longer bound by the repetitive nature of reincarnation.

Is this where the Machine will come in or should Peter ignore it and find a different way to break the cycle?  If he continues to re-cycle back to find his "home" will it truly mean and end to this story?  I've made much of the human consciousness recently and how Peter's current dimension may be one of the mind.  (You can read that here.)  What if all it takes to go home is just a simple appreciation of where he is and what he is doing and therefore attaining that enlightenment and breaking the cycle.  Perhaps he can do this in unison with Oliva as he often does and this will set history right and set it on it's true path.  This way Peter and Olivia can have their child as intended and Septembers fractured timeline will finally be set correctly. 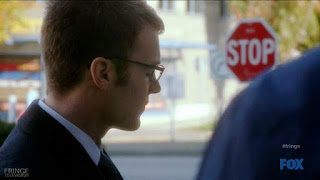 There has been a lot of Stop signs in this season of Fringe I think it is a clue for our heroes to stop repeating the mistake of the past and accept their fate and what destiny intends for them.  Will they heed this all too obvious warning?  I'm betting yes.

Lastly, as you look at the picture below you'll recognize it as the calendar of the First People.  It's been theorized that the First People were really Walter, Astrid, Peter and the rest.  See it's cyclical, wheel like disposition?  Periods of light and dark that repeat themselves.  Even with their best intentions our poor heroes kept going back and making new timelines but the same mistakes were repeated. 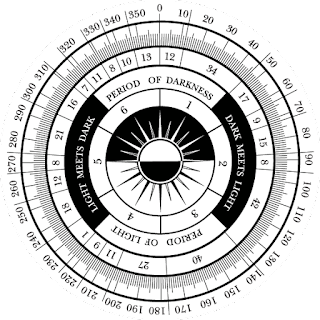 The finality of Fringe may only come when the cycle is broken but that doesn't mean the end of all things.  For Olivia, Peter, their child and the rest a new path will be set and this yellow brick road will lead to no land of illusion.  Instead they truly will be home.  We will all be happy and the new Fringe movie will come out in 2014!