Sleepy Hollow - The Path to Redemption 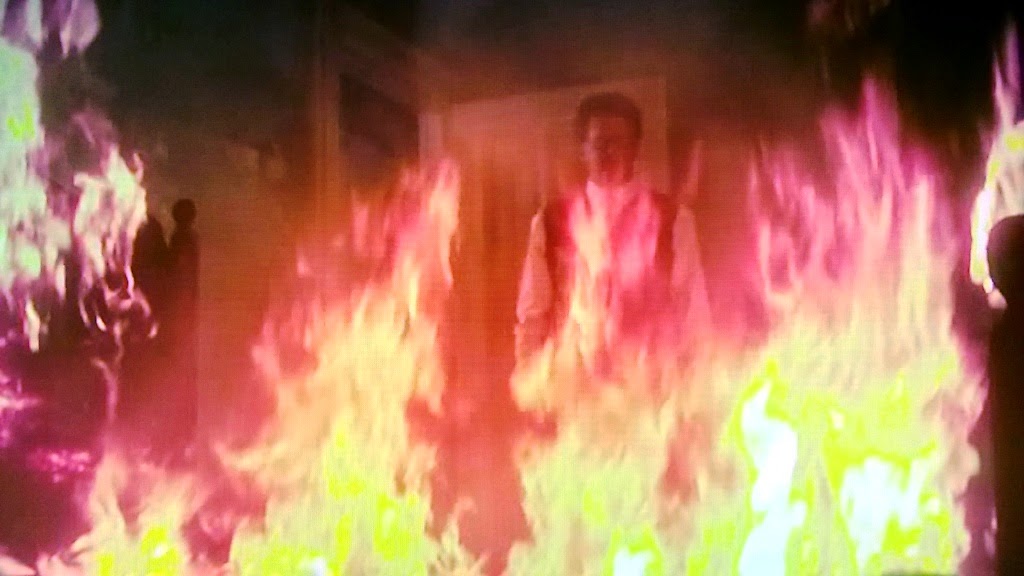 The path to redemption looks a little heated doesn't it?

Remember when John Noble's character from Fringe, Walter Bishop, sought redemption from all the wrongs he committed?  Playing god, abusing his son.  Now his character from Sleepy Hollow can't be any further from God and this time he is the abused son.

At least, in the depths of his heart that is how Henry Parrish feels.

As broken as Walter Bishop was, we the viewers always sensed he could make it better.  He sought to make it better and was willing to make the ultimate sacrifice in order to right the wrongs he committed.

Do we have the same sense for Henry Parrish?

Henry is a deeply bitter man.  He has made a pact with the demon Moloch and even calls him "father" such is the depths of his anguish.  His real father, Ichabod Crane, is at odds as to whether to treat him as an enemy and defeat him as a foe.  He wants to embrace his son yet he knows the danger he represents.

But there is one person that knows where Henry's true heart lies. 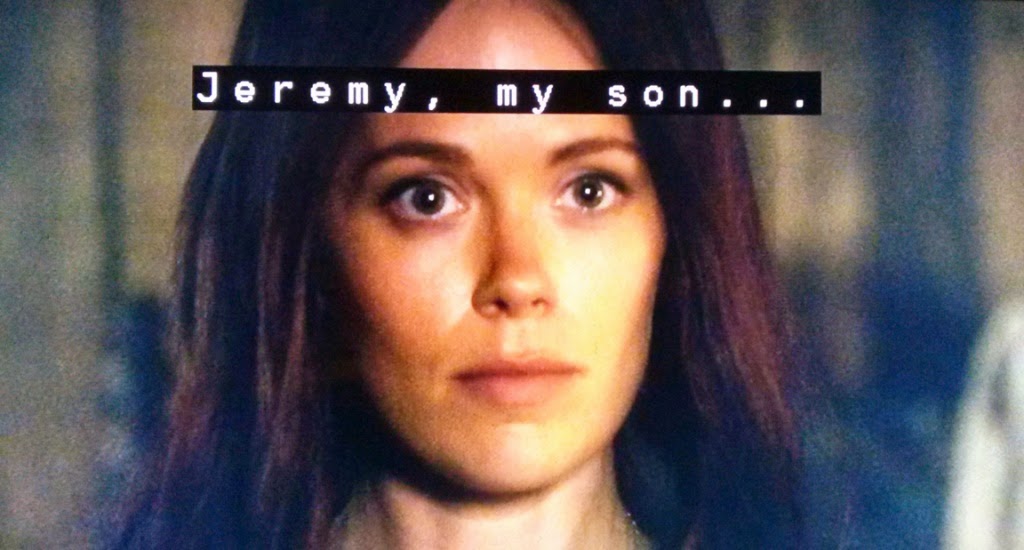 Yes, Jeremy, intones his mother.  She really knows how to cut to the core.  A deft reminder as to who Henry really is.  It is a sharp admonition in that she knows how deeply this wounds Henry.  She plays this card because she has insight into his motivations. 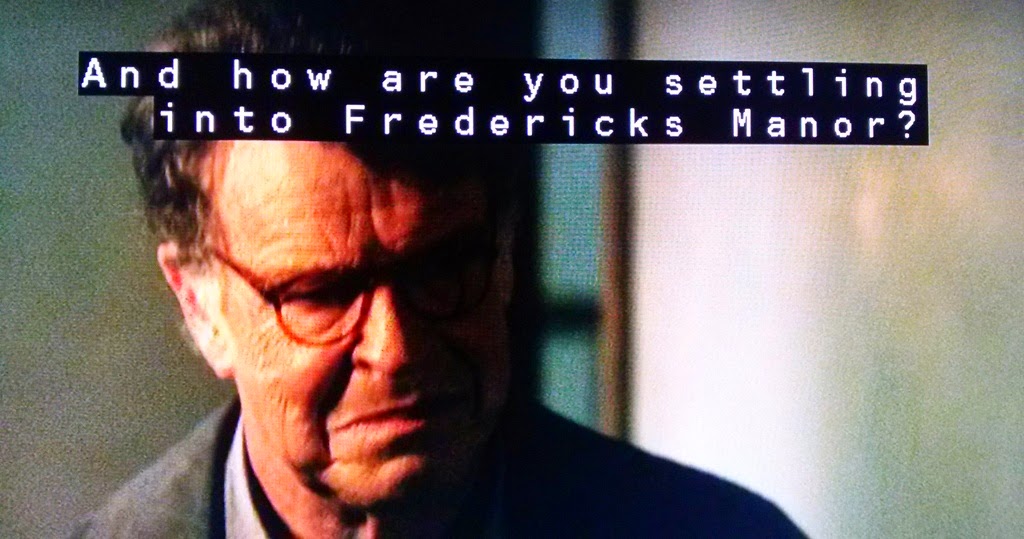 Henry has chosen to live in the  house he was born in.  Why we  ask?

His mother Katrina feels it is because deep down Henry ( I prefer to call him Henry versus Jeremy.  At least until he reaches his point of redemption) wants to be embraced by his family again.  Yes, he feels betrayed and has been swayed by the evil that walks between worlds.  But like all that have been tempted to follow the wrong path there is still  a kernel within that seeks the good. 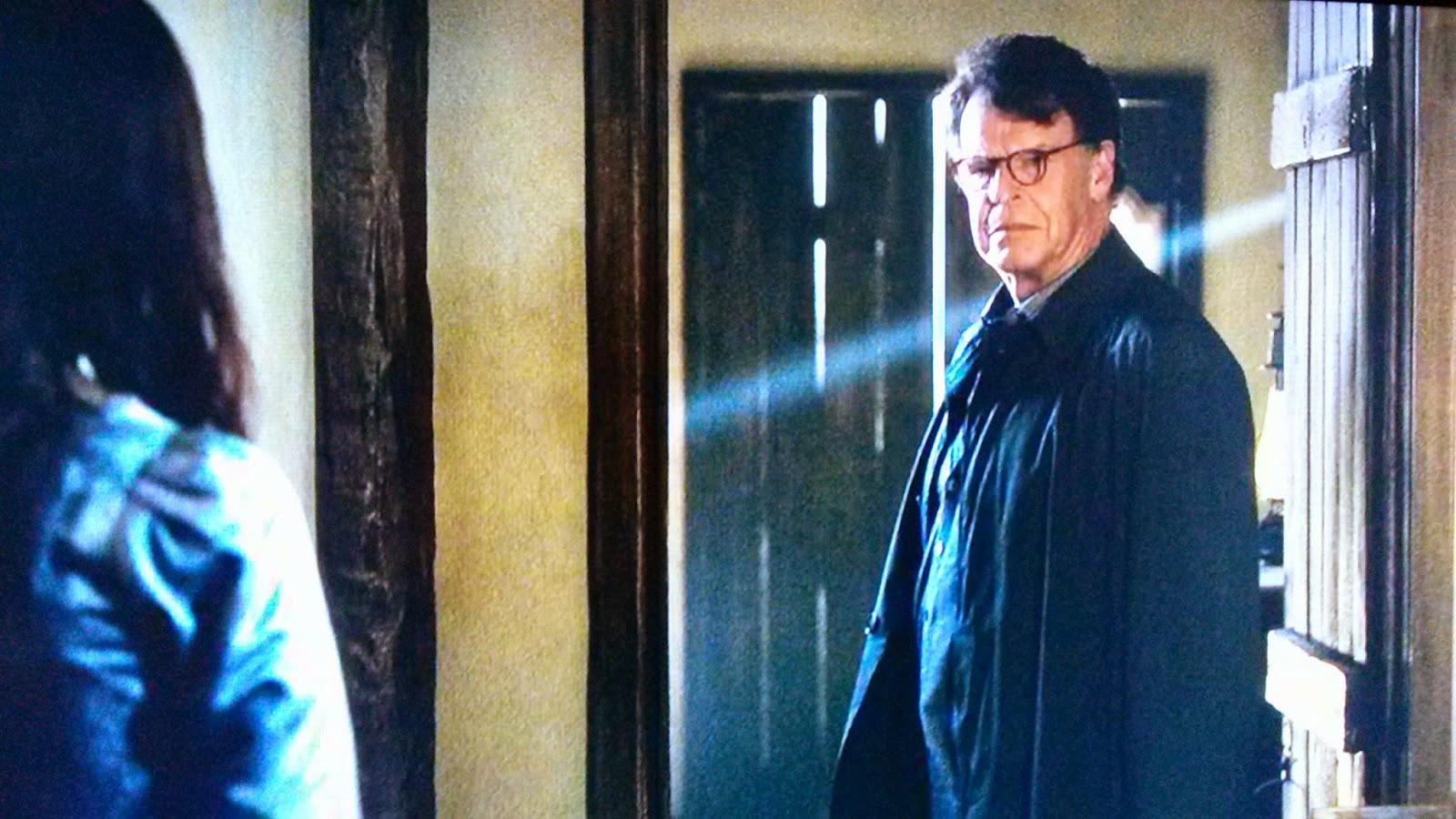 Did Katrina overplay her hand?

In the above picture Henry reacts to Katrina's initiative. The shaft of light behind him seems to bisect his soul.

He didn't take it well. 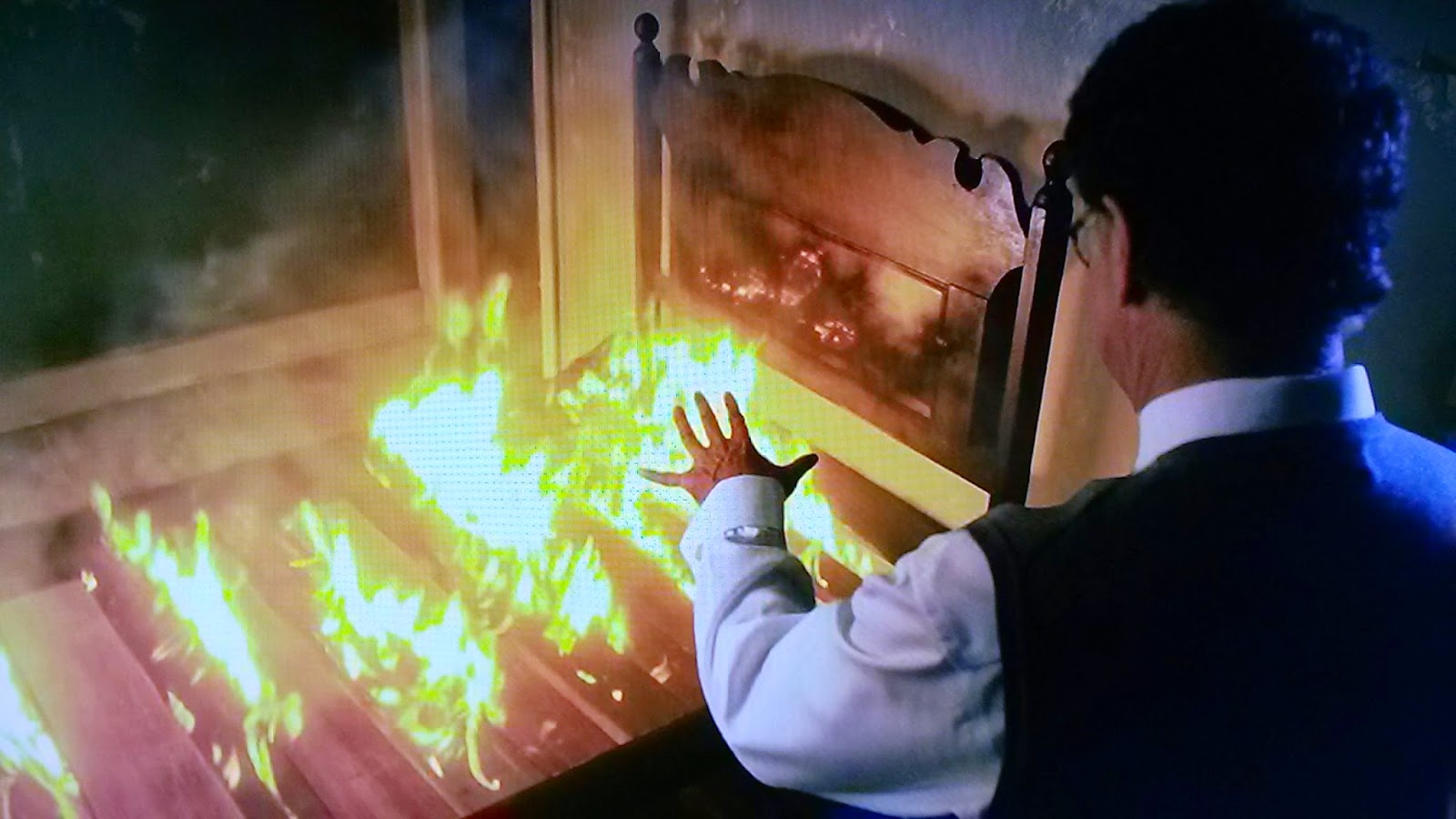 Seeing the bed he was born in, Henry sets it to flame.  With this act he attempts to defile the bond between mother and son.  This may represent Henry's nadir in his relationship with his mother.  Can it really get any worse?

I suppose he could try to inflict bodily harm to her but somehow I don't see Sleepy Hollow going there.  Maybe the threat of it but not the actual act.  That may be the bottom for Henry.  From there he may follow the path to redemption and it may take half or the whole season to get there. 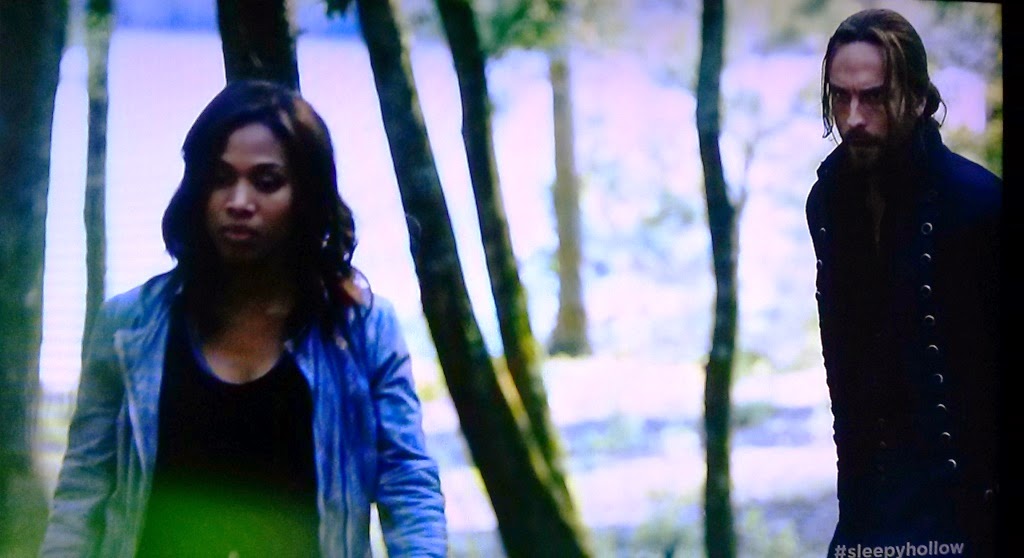 Impediments to Henry's path may be the distrust that Abbie feels.  Her pointed conversation with Crane where she tells him of the bond between mother and son may be too much to overcome.

I'm glad they are revisiting the themes of trust versus distrust.  It was such a large part of last season.  We revisit the distrust Abbie has for Katrina and we are reintroduced to the mistrust Abbie has for Crane.  At least in as much as his relationship with Katrina is concerned.  Abbie is concerned that these relationships might  interfere with the larger picture and their battle with Moloch.

She is perfectly justified in doing so. 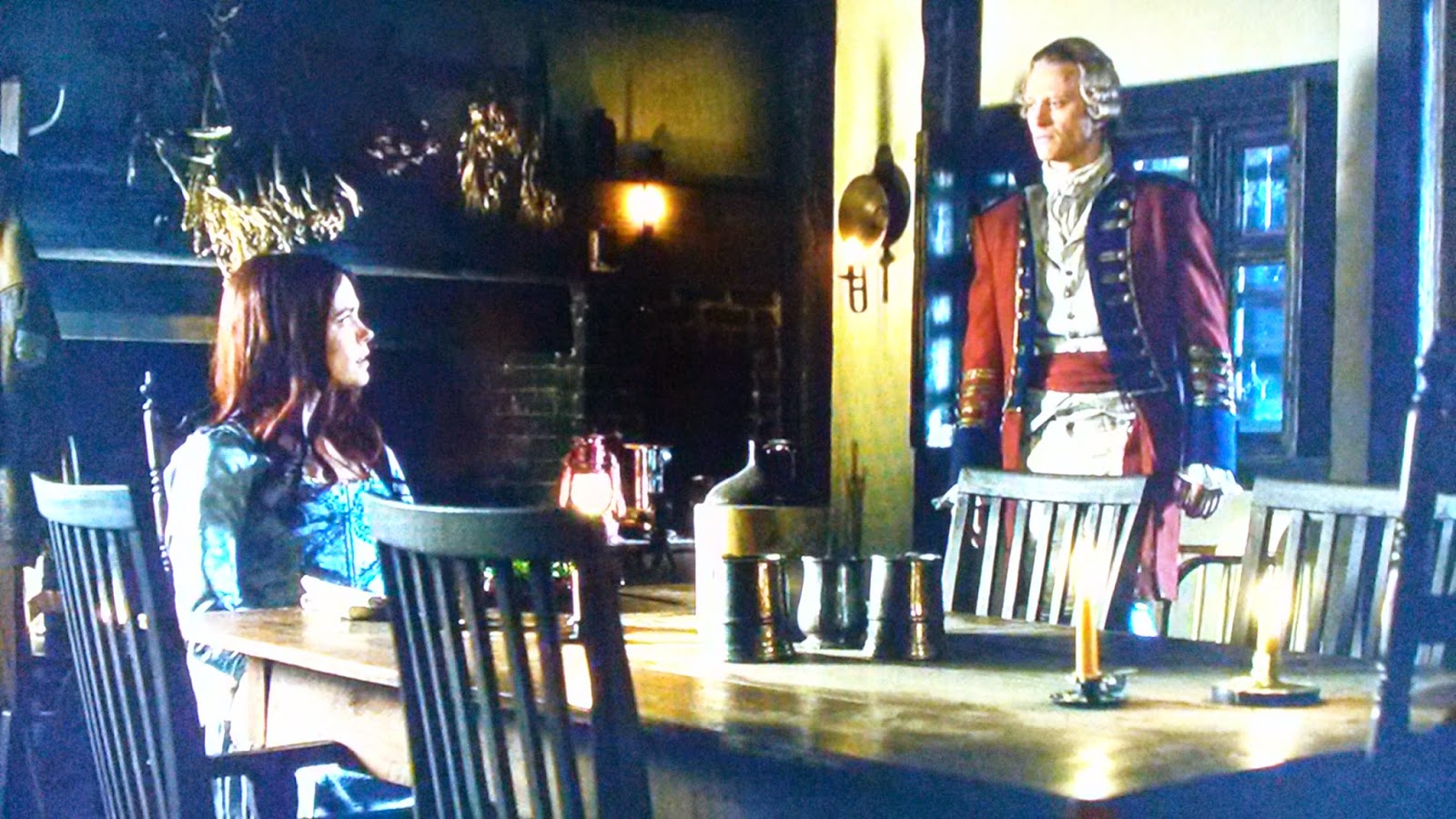 Abraham has a healthy dose of mistrust for Katrina now.  He is wary, yet he still keeps her unbound albeit confined.  He questions her motives but he still yearns for the relationship he once thought was his.  We'll see how long Katrina can play with his emotions.  I can definitely see Katrina manipulating his sympathies should she feel threatened by the Horseman of War.

Wouldn't that be a battle?  The two Horseman fighting over Katrina.  I want to see that! 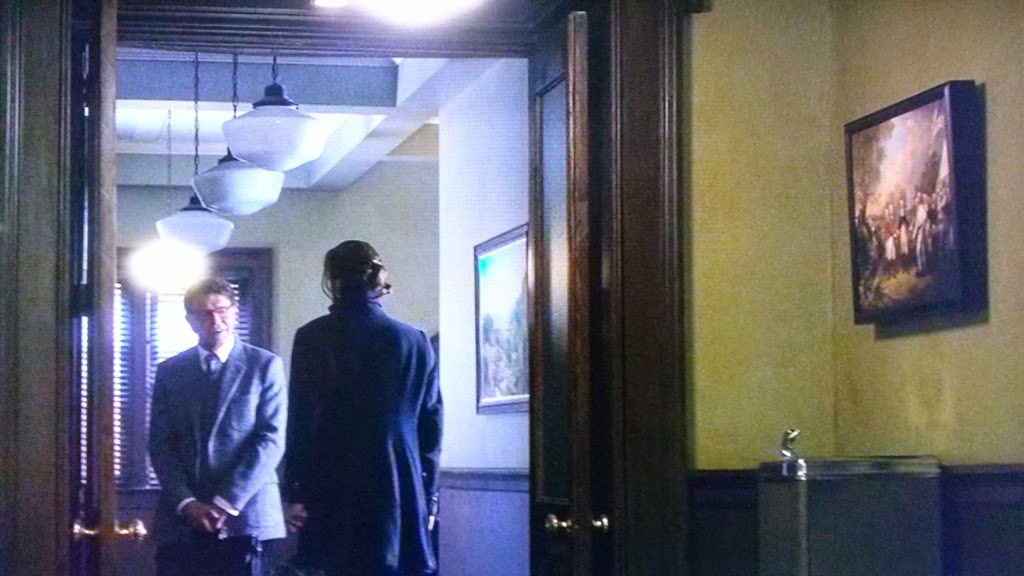 I had to add this last picture.  Did everyone notice how the lights were out over Henry's head?    Nice touch..   When Sheriff Reyes entered the picture from the opposite end of the hallway the lights were just fine.

Another nice touch from the above frame was the inclusion of the "Surrender of General Burgoyne" by John Trumbull hanging on the wall.  It marked a turning point in the American Revolutionary war where the British and their Hessian allies were defeated at Saratoga.  This was also the battle where Benedict Arnold was stripped of his command by General Horatio Gates for disobeying orders.

Arnold went on to victory later by once again disobeying Gates and defeating the British despite serious wounds.  Arnold overcame the wounds to his leg but not to his heart.  I think from here the "Dark Eagle" began his descent.

When Sleepy Hollow returns we'll see if Henry can overcome the wounds to his heart and stop his own descent.