The most recent episode of Helix, "Cross Pollination" came to a close and my shoulders just slumped.

I must be really jaded by TV.  A roomful of people were poisoned to death and I felt disappointed. 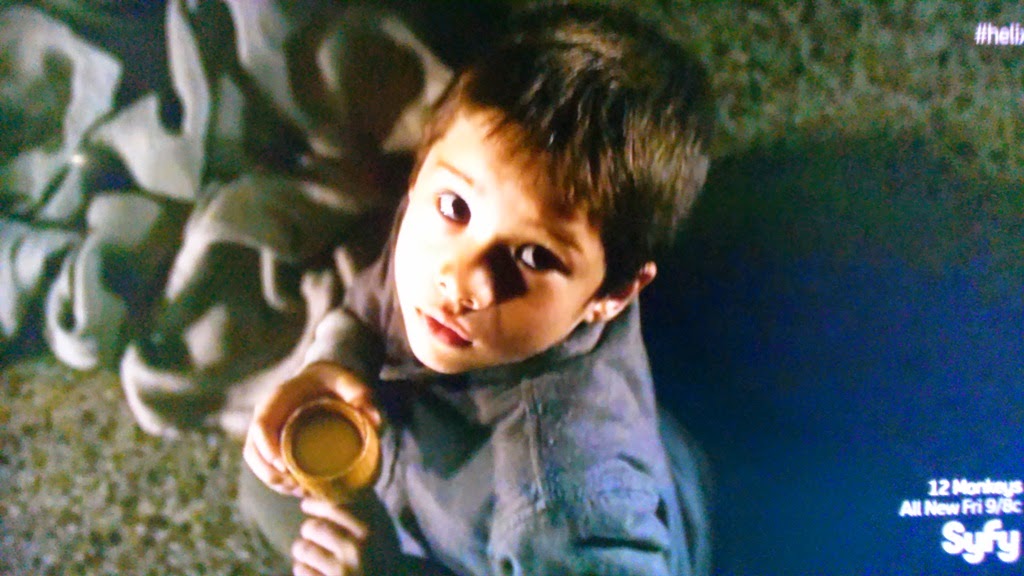 That's not to say I wasn't slightly perturbed that Brother Michael didn't spare the little boy.  Where did they find this kid?  Cutest little boy ever!

As Brother Michael passed through the crowd the music rose the people fell and Michael felt nothing.  (Yikes, maybe I should start a cult if I didn't feel that much too.)

I think I was disappointed because the people Michael poisoned didn't mean that much to me.  I felt no personal investment with them.  They've been characterized as sheep.  They've turned on each other and the CDC team .  And when we got to know individual members they come off as paranoids, schemers and yes, again, sheep. 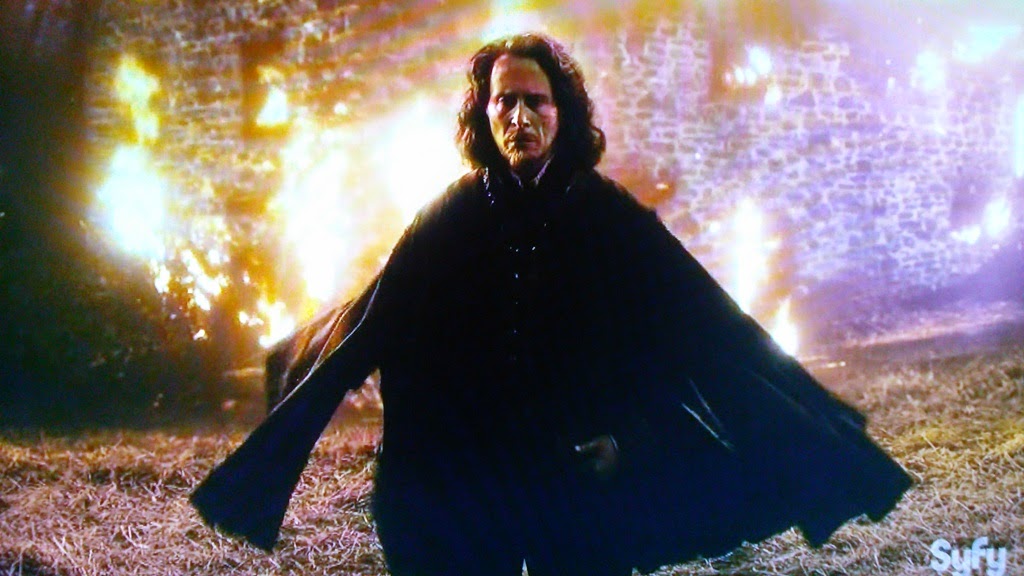 I get it.  Brother Michael is the ultimate evil.  A Narcissist's narcissist.  He was wronged back in 1601 and he hasn't gotten over it.  We get his back story and we understand his motivation.

Oh, that little tidbit opened one of the big reveals in the episode.  Let's get to it! 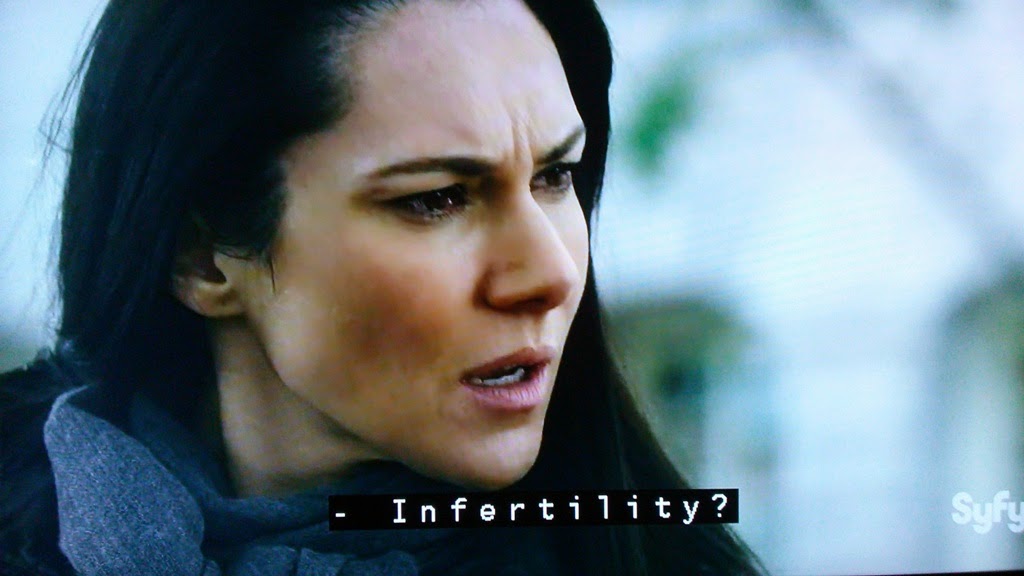 We learn from little mam'selle Durant why they are so interested in Michael's work.  Infertility!

Michael is so bitter from another man fathering a child through his young wife that he has been working on making men infertile for 400 years.  Woman too?  Not sure.

Anyway, it's a great plan and it makes you wonder why Ilaria doesn't adopt it.  Oh, that's right, too impatient.  Bring on Narvik C and let's end this.  Well, I like the plan and I thought it was pretty clever of the Helix writers to go in this direction. 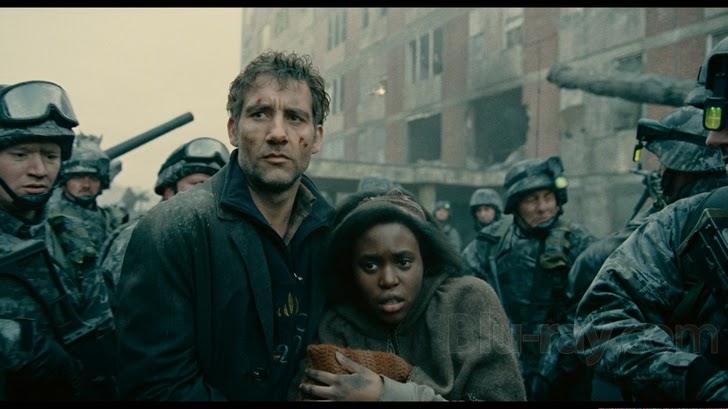 We've seen something similar from the movie, "Children of Men."  We don't explicitly find out why people become infertile in that movie but as you can see from the above image eventually somebody does have a child again.  Great movie a modern day sci-fi classic.  See it.

So, similar themes of infertility on an apocalyptic level.

Our next reveal?  It comes in the form of the next episode's teaser and I'm so happy.  (Skip ahead if you hate teasers.)

The Coast Guard shows up and tells everyone they have to get off the island.

Yaaaaaaay!!!  Unslump those shoulders!  (Can you tell I'm getting a little tired of the island nonsense.) 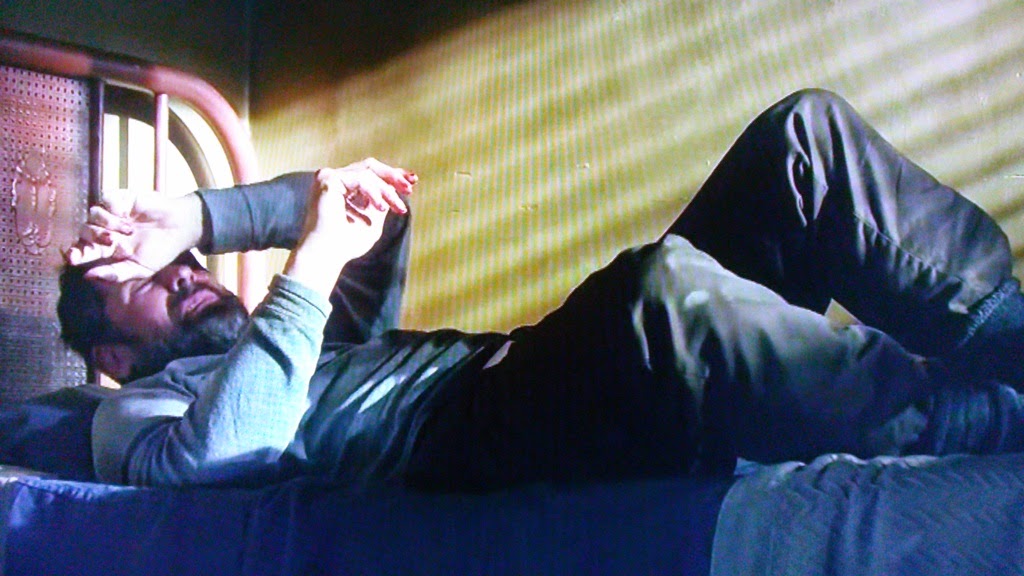 Oh wait, Alan stays on the island because, as we know, Julia is looking for him in the future.

Perhaps without all the cult followers the show will tighten up a little and our team will be left fighting the "Veggie Vectors" after the Coast Guard levels the Abbey.  That's just a guess but something awful happens to the compound because in the future it is just a smoking hole. 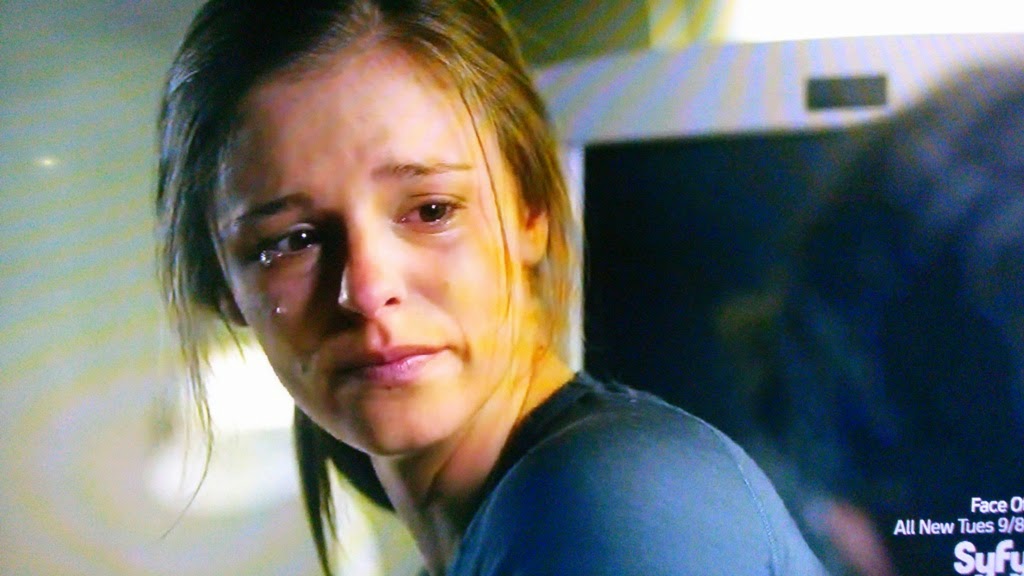 Sorry, that sounded cruel.  But this plot line couldn't continue.  And she didn't so much as lose the baby, she had it taken from her. 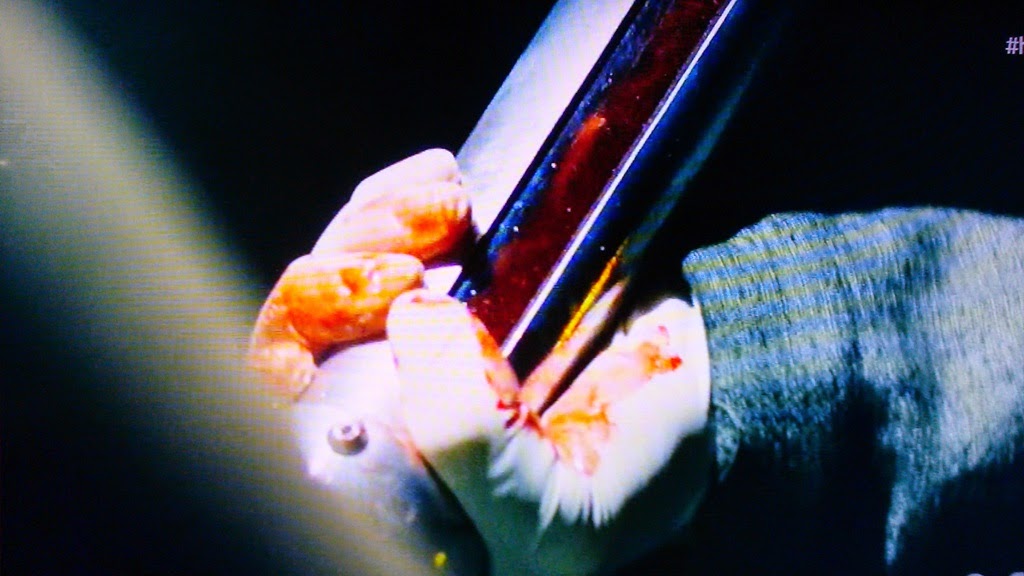 And it was Alan's fault!  (Pretty much.) 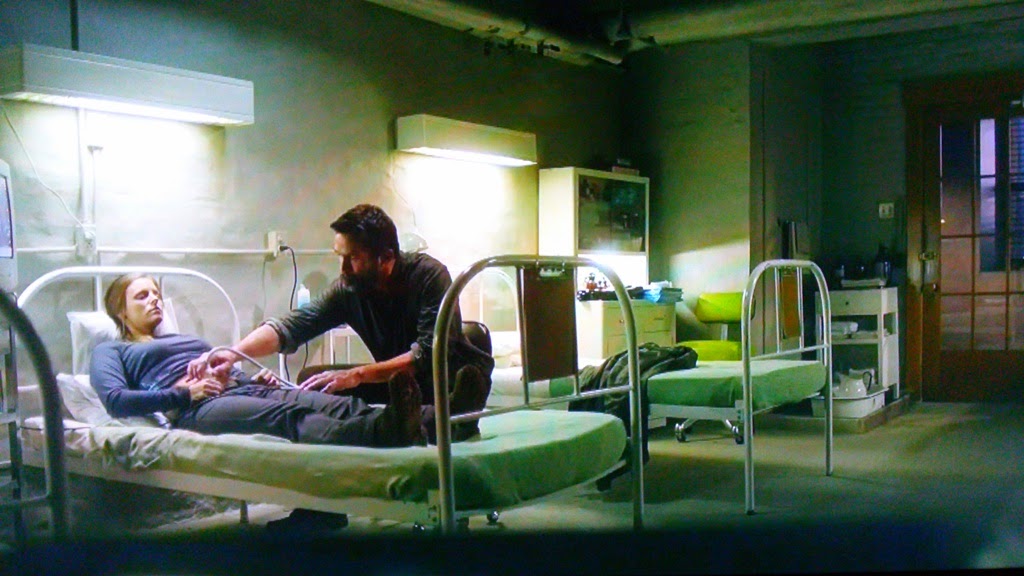 He did feel pretty badly.  It was his child too. 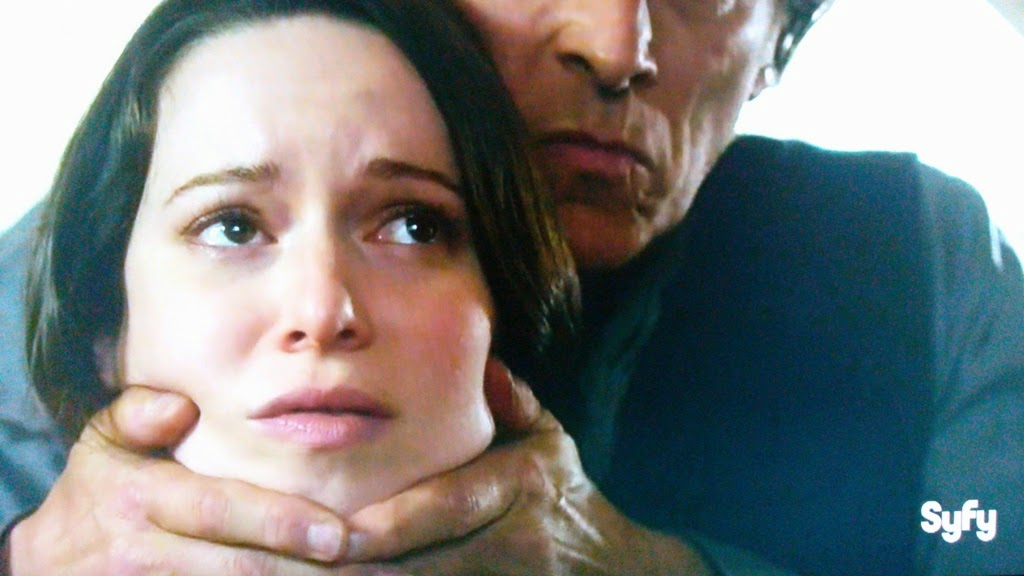 So what is Michael's endgame?  He's got the fetus, he's still going ahead with the "planting ritual" but Amy gets to keep her teeth.  He's "thinned his crop."  So what does he do with an immortal fetus?  He doesn't like anyone else to procreate.  He's a geneticist.  Sooo,  we're not certain Immortals can procreate and that seems doubtful.

He is a madman so maybe he wants to clone his favorite wife/daughters from time gone by and have them forever. 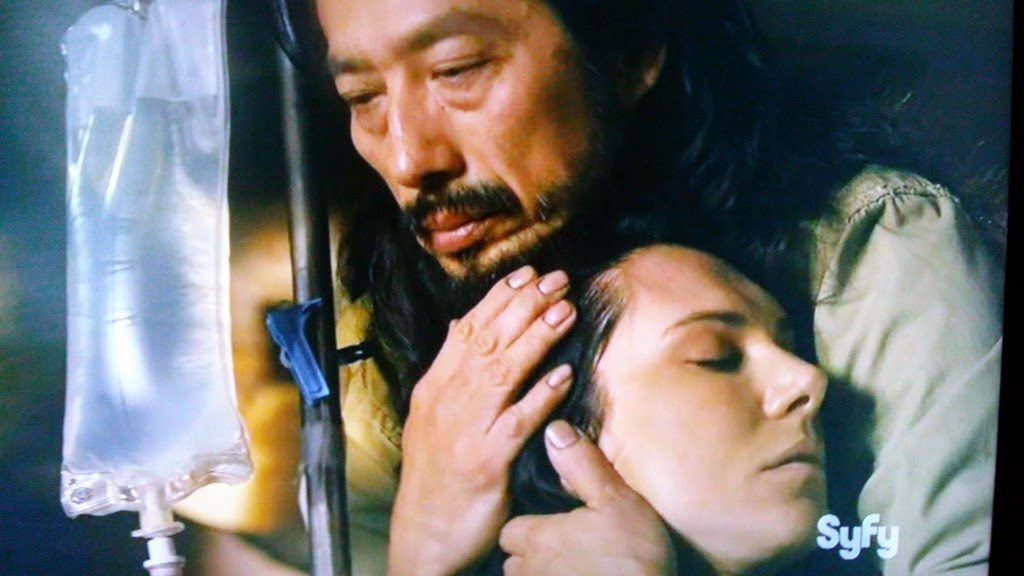 Michael still has his goons, the Veggie Vectors (Fungi Friends?) are still on the island, the CDC is there and the Coast Guard too.  A big battle ensues, Michael and his contingent lose, a power vacuum arises and Hatake arrives at the island to fill the void!

We'd get to see him in the present time and he'd be back on the show.

Now that's what I call a win win!