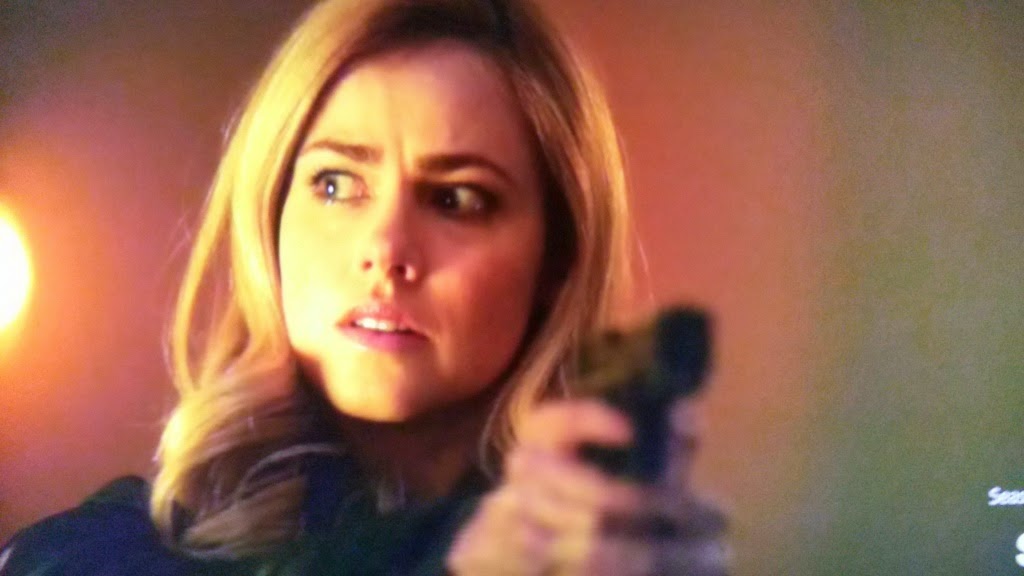 12 Monkeys concluded its successful first season with an episode that, while it didn't leave us with any thunderous revelations, I think it our mental apple cart was upset enough to leave plenty of macs rolling across our respective cerebral floors.

The above frame of Cassie is one of my favorites.  It's the look of incredulity she flashes to Cole when he claimed he could handle Ramse and talk him back from the apocalyptic edge.  She's thinking endgame, while much to  our delight, Cole is thinking outside the box.

Breaking the Cycle of Fate

Shall we start at the end?

That's where most of the "apples" rolled.  I don't think anyone guessed Cassie would be the one launched into the future.  If there was anything that sent ripples across the cycles, circles and fabric of the space/time continuum, this was it. 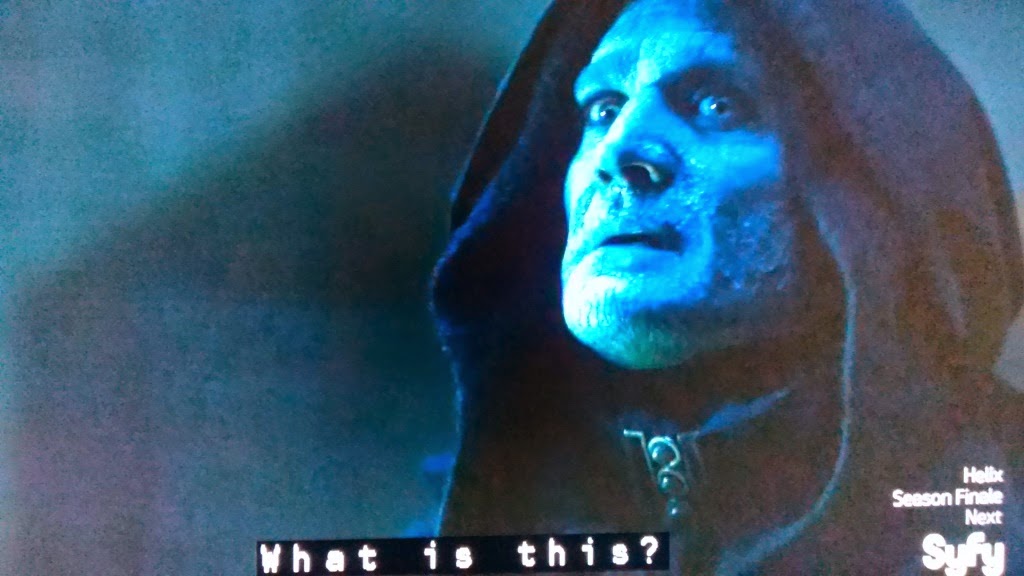 Here's another look of incredulity.  Ghost Soldier number one (Ray!) looks on with shock and dismay as the Splinter machine comes to life. 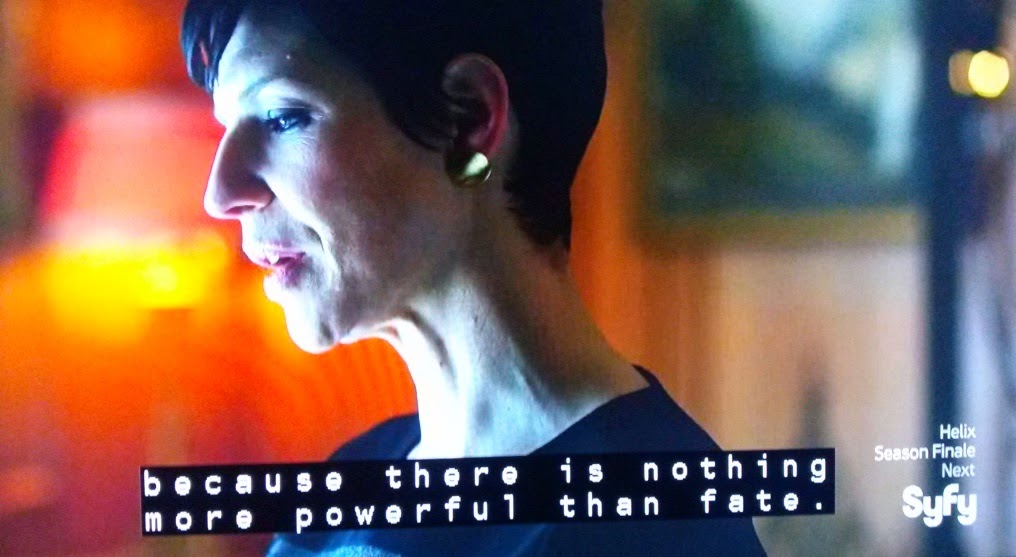 The "Army" put a lot of faith in their machinations and oddly put it down to fate.  How could anything go wrong when you knew everything in advance?

Of course it helps when you have a time machine at your disposal and someone from the future that has utilized it. 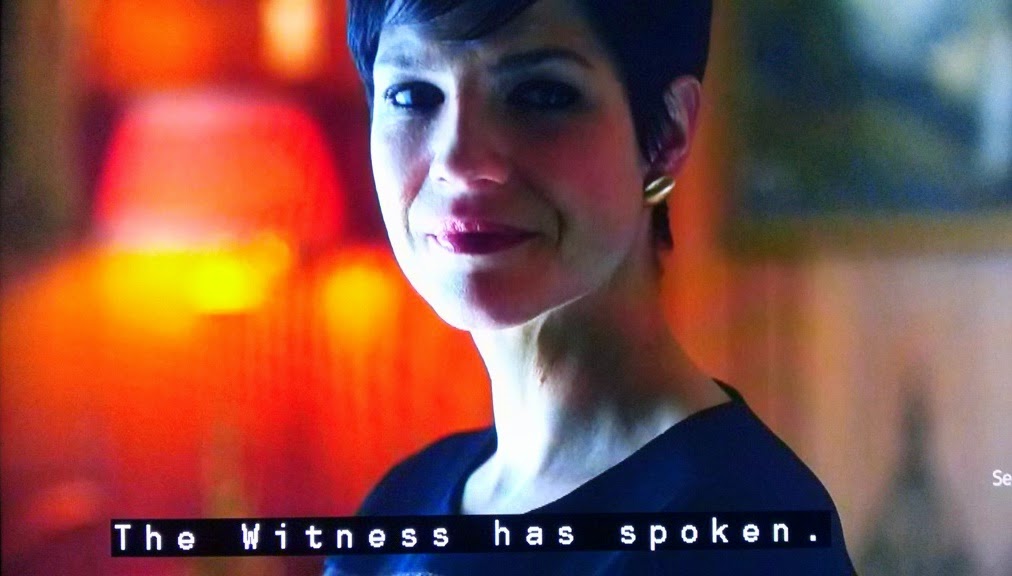 They also possessed the ultimate wild card in "The Witness."  How could things go wrong when your favorite ephemeral being is passing along crucial little tidbits to guide your way along the chronological frontier?

Fate versus free will played a major part in this episode and I was glad to see free will take the upper hand.  With all the scientific minds represented in this show, it was surprising to see so many ascribe their paths to fate. 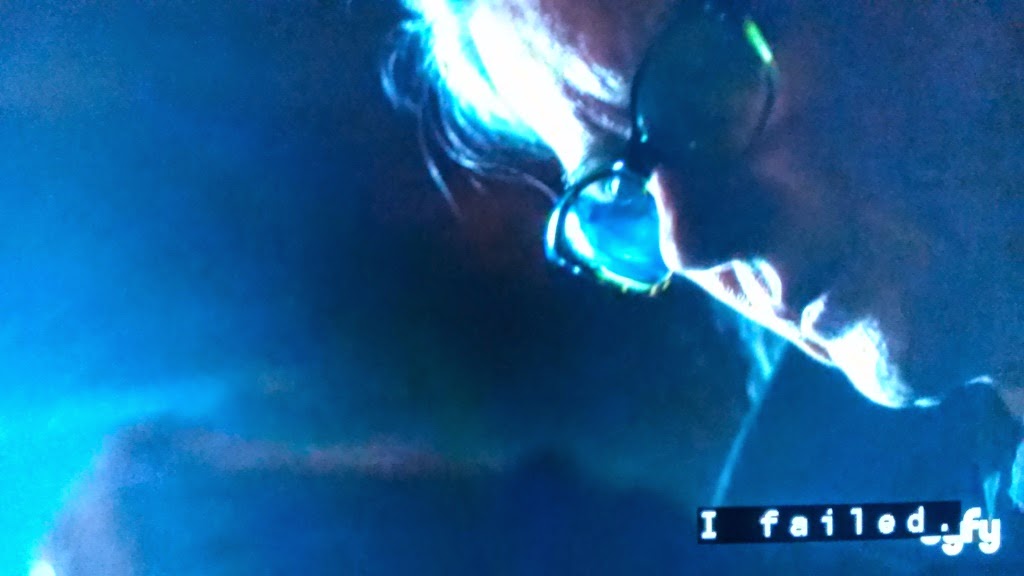 I was dismayed to see Jones admit to defeat.  When she declared to Deacon and the Blue Man Group, "You can't change the past" I started smashing furniture in my living room.  (But not the TV.) 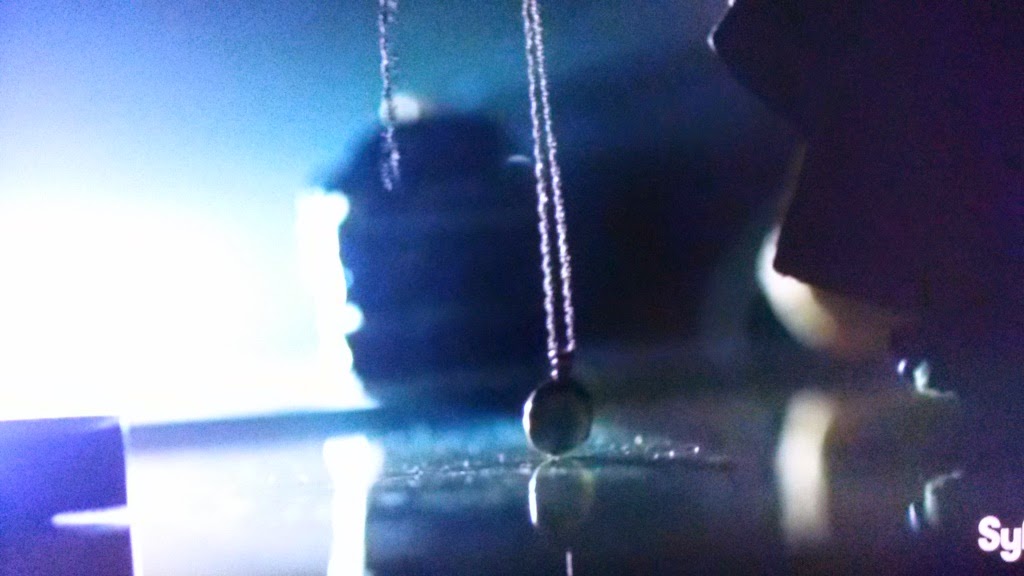 When she took one last look at Hannah and let go of the locket she had reached her nadir. 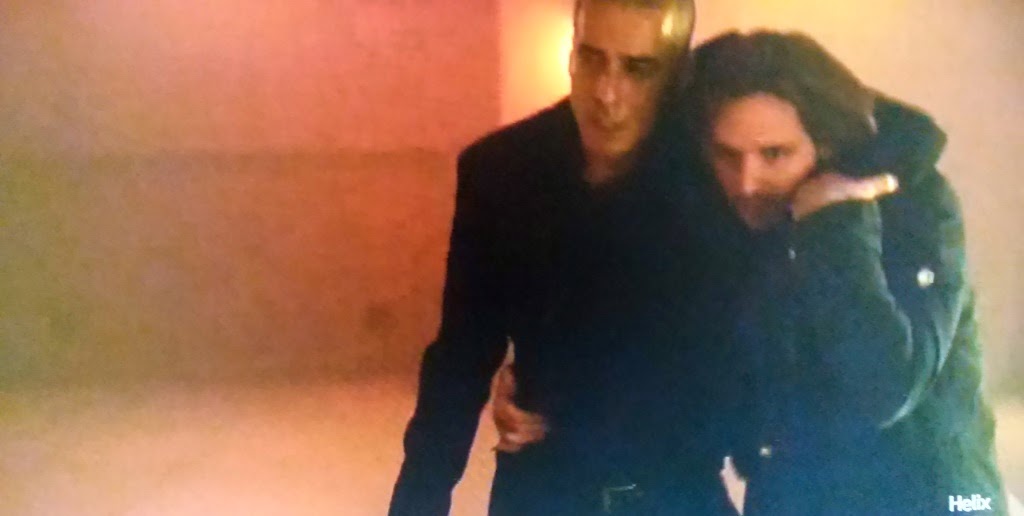 However, Team Splinter had a wild card of its own.  "No one has to die today" to paraphrase what  Cole said.   This was something the "Army" didn't count on.  (I'm referring to Olivia, The Pallid Man, The Witness and The Blue Man Group as the "Army" in order to bunch them together in opposition to what Team Splinter is fighting for.)

This was a significant and heroic moment for Cole and it elevated his character greatly in the mythology of the 12 Monkeys pantheon no matter how small a sampling one season has given us.

It also reduced the infallibility of The Witness and the Army.  They were so sure of their "fate." 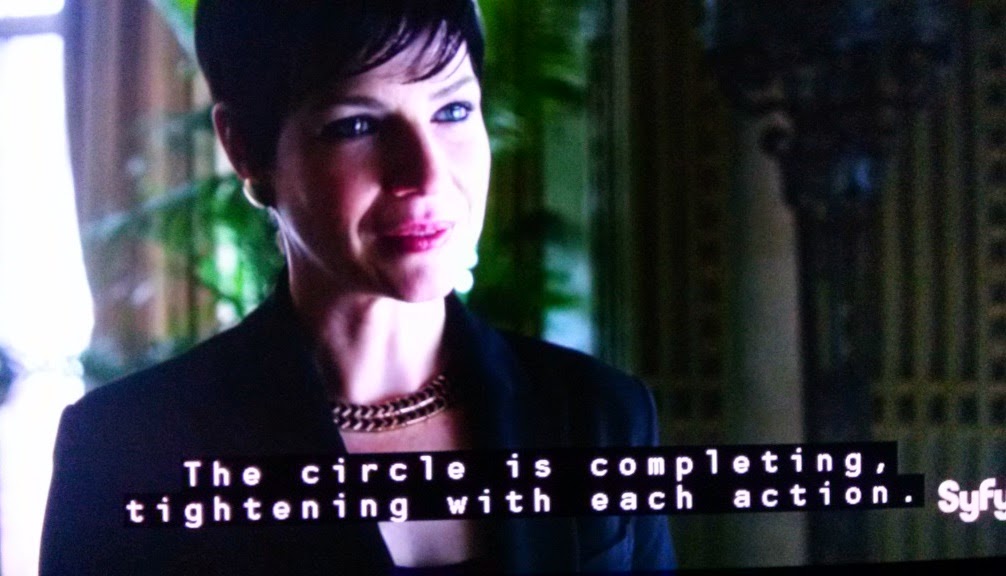 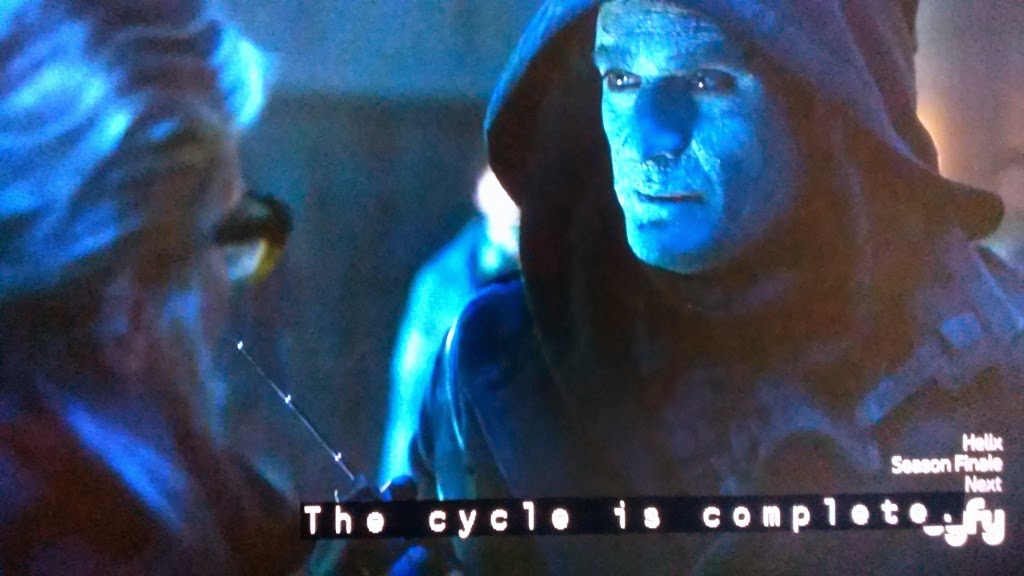 As I said, I was particularly delighted to see "Free Will" take the high ground.   As a disciple of the TV show Fringe, I've always thought a little courage goes a long way.  If you have enough faith in yourself and your friends then nothing is insurmountable.  That's why I was so saddened to see Jones lose her faith.  Fortunately, Cole still had his and ultimately he didn't give up on Ramse and for his part, Ramse still believed in his brother Cole.  Ramse knew Jones would do the right thing in saving Cassie and, to wit, the cycle was broken. 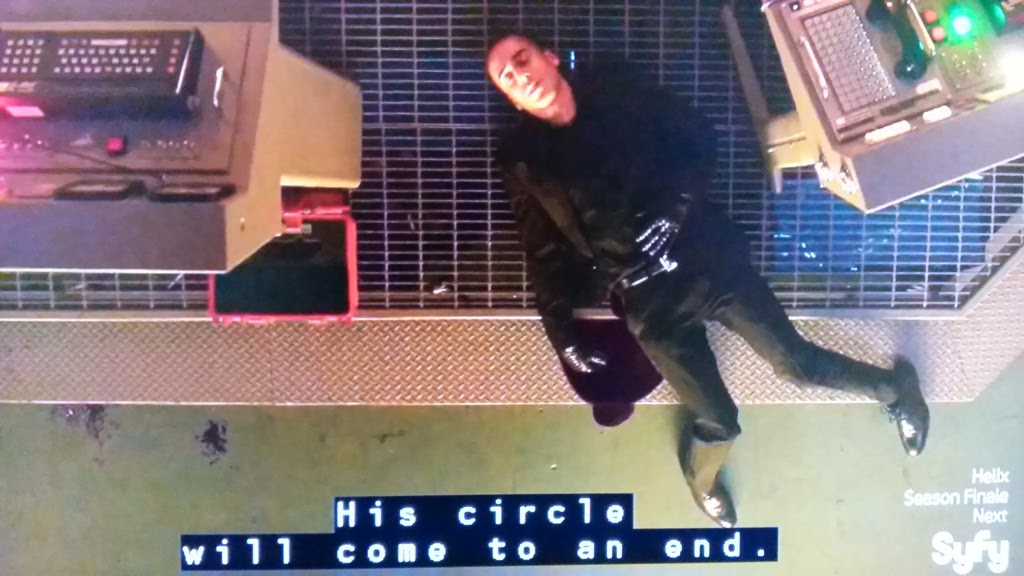 There's no such thing as a sure thing!

Why did the "Army" so firmly believe in their "fate?"  If this was truly a cycle then shouldn't they have been down this road before?  The fix was in.  As a viewer of this show I led myself to believe with all the references to cycles and circles the Army had foreknowledge of events abetted by The Witness who seemingly sat outside the "Flat circle of life." (A True Detective reference.)

Hold on.  That splattering noise you just heard was my "mind blown" experience when I just realized the "Flat circle" proponent from True Detective was named Cohle which is virtually the name of our circle breaker from 12 Monkeys, Cole.

Splat!  There it goes again.

Perhaps Cole is like Neo from The Matrix movies.  Unbeknownst to him, he too had traveled down the same road many times before.  Only to have the Matrix machine delight in his futility. 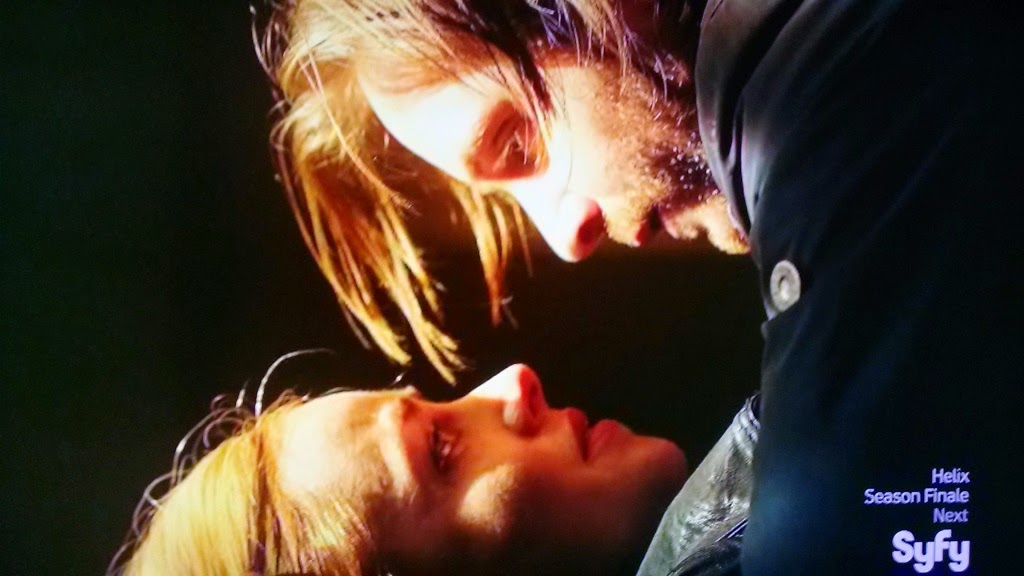 When did we ever hear any mention of love from Olivia and her ilk?

Never.  (Well, she did say you try to save the ones you love.  But I think that was just to manipulate Aaron.)

The irony of their situation is they relied on the paradox of time travel.  It took time travel in order to create time travel.  What they didn't count on was the paradox of love in choosing the one versus the many and still getting a win.  The Army spent so much attention in closing the circle they forgot the smallest factors that made it mutable in the first place.  Such is the weakness of absolutism.

Oh, and, to those who felt Cole should have kissed Cassie when he place her on a the pedestal, I disagree,  I would have kissed her a loooong time ago.  (Too pretty not to right Chris?)

So, this leads us to two major dimensions of the seasons end game.  The identity of The Witness and the Army of the 12 Monkeys. 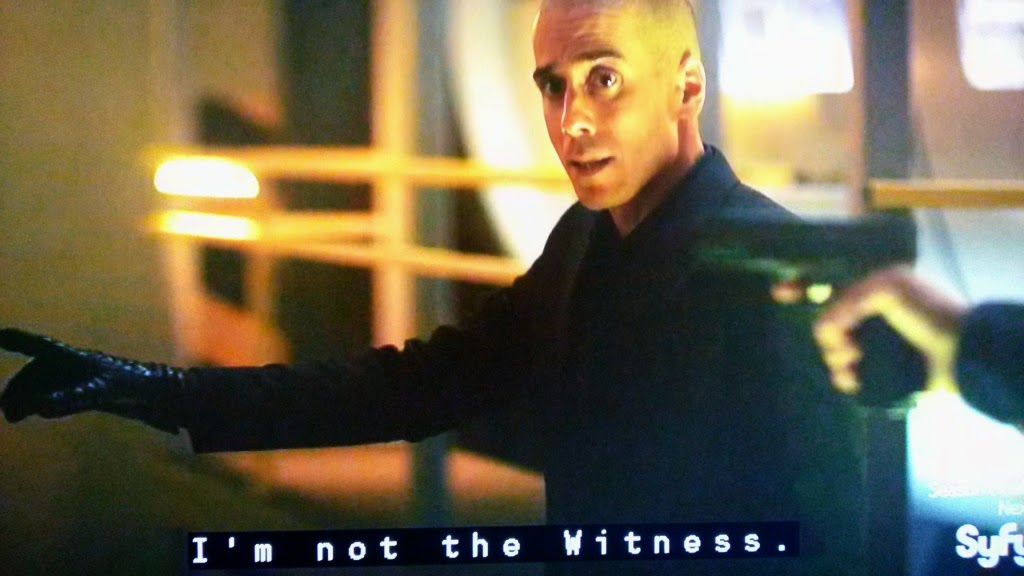 As many of us suspected, Ramse is not The Witness.  It's okay to be a Traveler.  You make a lot of money, see a lot of things no one else has and you make friends and influence people.

So who is The Witness? 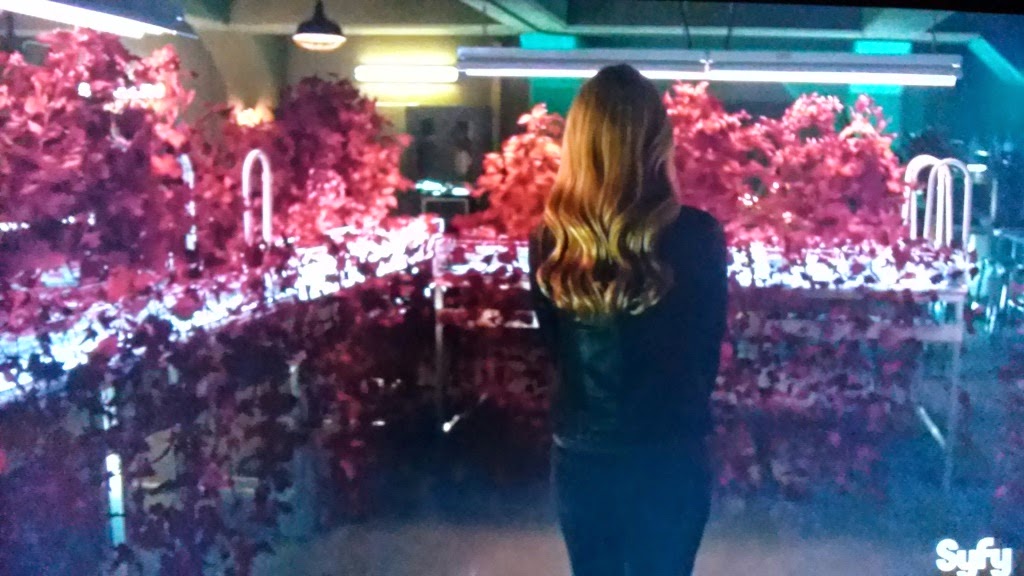 Pfft, even I'm having a hard time swallowing this one.

But it makes sense doesn't it?

Olivia said the vegetation turns red when "he's" been around.  It turned red before Cassie a few episodes ago when she was talking to Cole and he vanished.  It's red before her now in the above frame.  (A vagary of time travel.)  She too is a time traveler now and, oh, the things she's witnessed.   Plus, she's had the serum!

Isn't she too pretty to wear that Haz-Mat outfit we usually see The Witness in?  You dare cover her with that get up?  (Don't make me start smashing furniture again.)  Maybe she doesn't want Cole to see who it really is.  But isn't The Witness working for the "Army?"

Not if you're playing a long game and you're secretly working against the Army to foil their plans out of love for Cole and the rest of humanity.

Oh snap!  Cassie is the Witness! 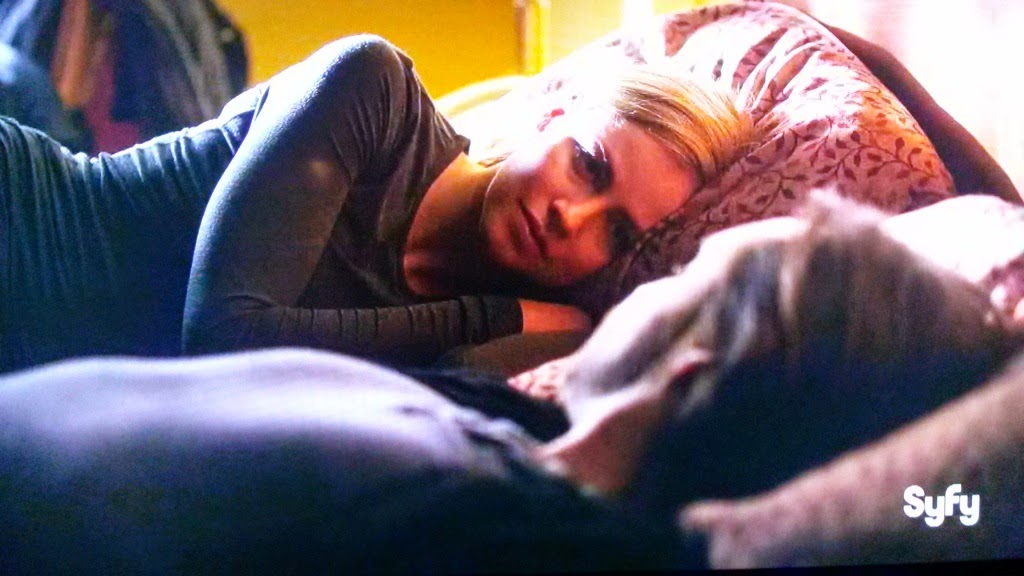 I guess when you look at someone like this you'll do anything. 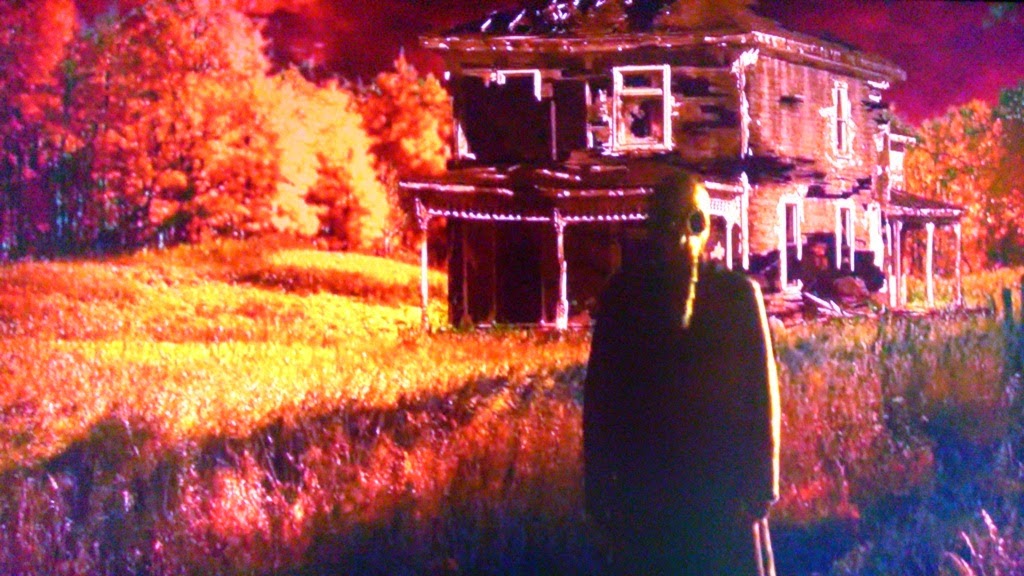 I'm actually hoping Cole is The Witness.  I've got this theory where Cole has time traveled so many times that he has created an entity that has splintered off from himself.  A "Time Ghost" if you will.  A being that sits outside the plane of time and space and can witness anything from a fifth dimension.  (If you've seen Interstellar you know what I mean.)

If it's Cassie I hope this is teased out for a long time. (But not as long as it takes for Cole to kiss her.) 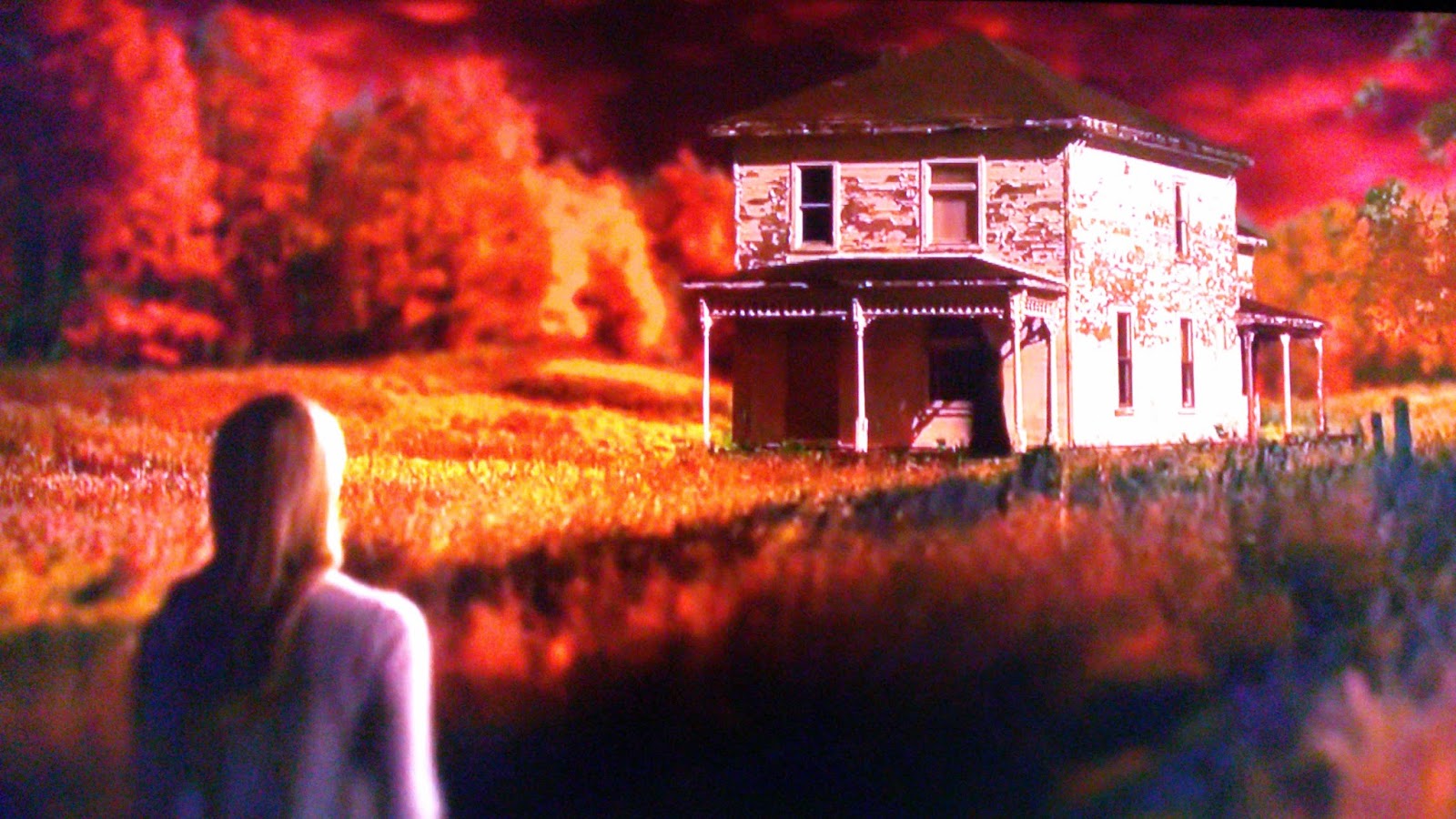 Remember the last time Cassie visited the Red Forest?  I wonder if Cassie bore witness to her own efforts into breaking the cycle,  building and rebuilding the metaphorical house she has set in motion?

Nah, my mind has gone splat enough for one day.

The Army of the 12 Monkeys 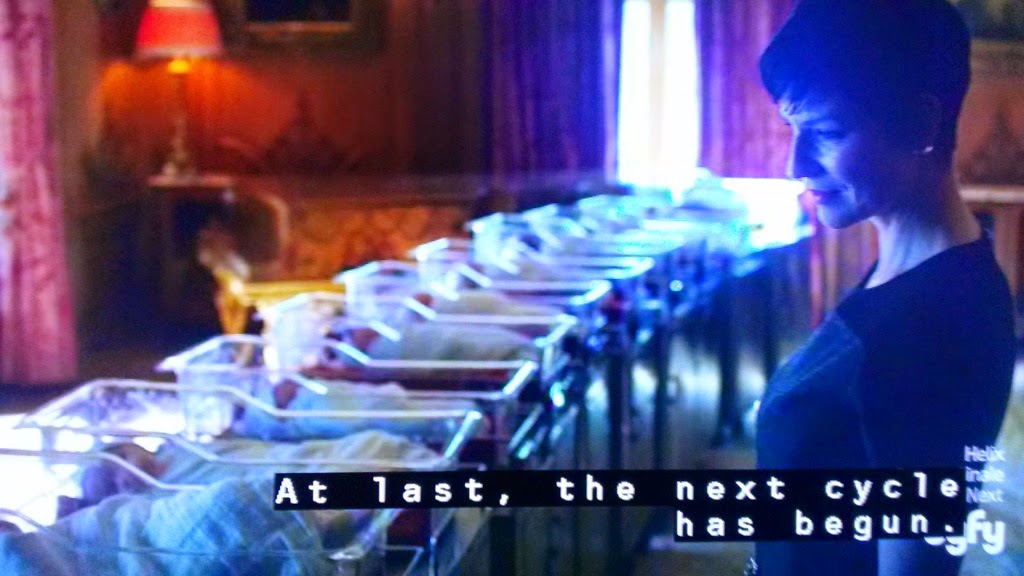 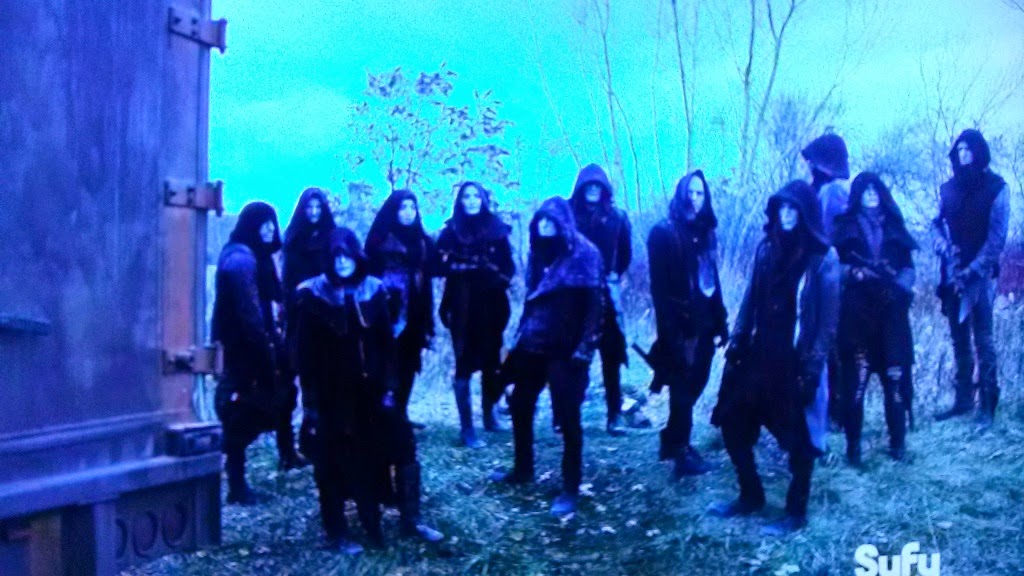 Not so much when seen in this context. 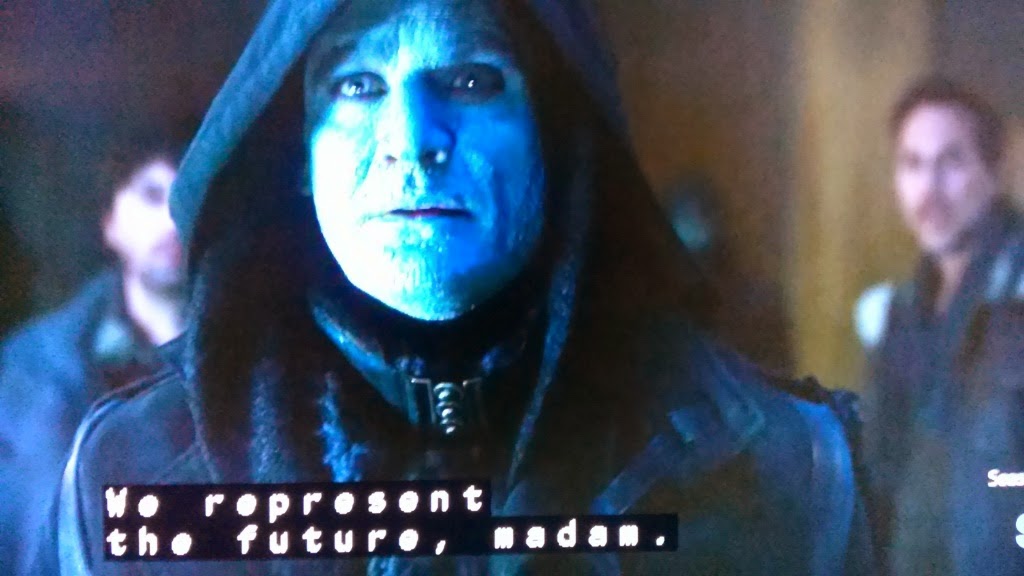 The future of humanity is pasty faced monks with a bad skin condition and aversion to sunlight?

When Olivia went to meet he 12 babies and we then cut to the twelve dudes seen above. ( I got the feeling they are not all male btw.) We were led to believe this was the Army of the 12 Monkeys.  Created in the past, honed in the future and "destined" to return to the past via the Splinter machine in order to wipe out the survivors of the plague and create a new world order.

Well, that was my inference.  This isn't my first TV rodeo so could be another red herring (bluish herring?)

I guess we'll find out more about them next season.  They can't be to happy to see Cassie and they claimed to need Jones.  Ramse is still alive.  I think the Army is going to have a little combat fatigue.

I've got a ton more to write about including quite a few odds and ends but I need to edit myself and wrap things up.  I'm also write up a report card specifically grading the major players and the actors that portrayed them.  So look for that.

But not before we get to one last item. 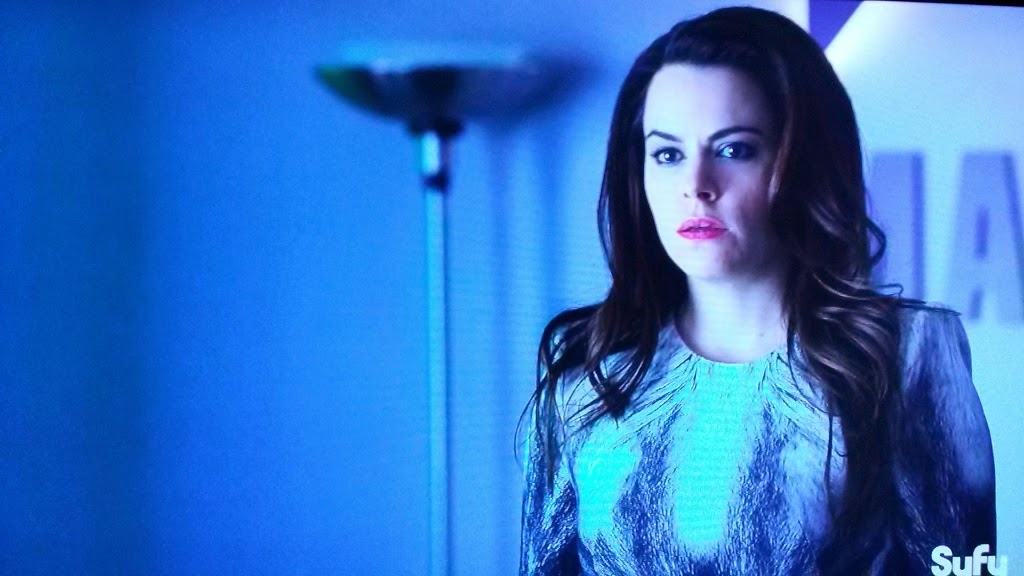 I liked you better when you were still a little cray, cray my friend.

Therein lies the reason she betrayed Cole to the Army.  I wasn't surprised when she picked up the phone and revealed she had set Cole on his path to kill Ramse and complete his circle.

She's on her meds.

When Cassie and Cole sat in the audience of the Markridge forum Cassie remarked Jennifer had found the right balance of medication.

To her detriment I am saying. 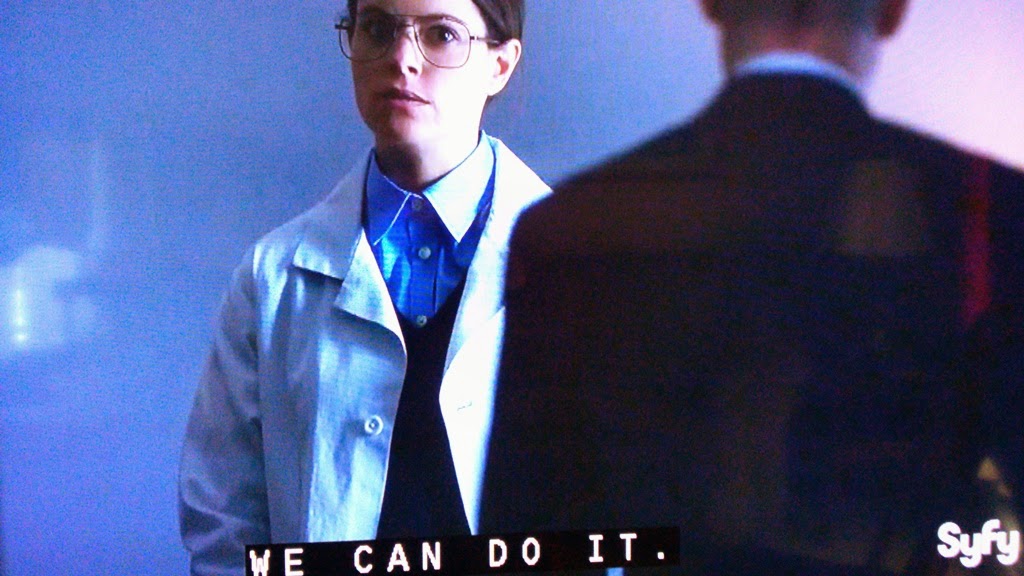 Jennifer can no longer look outside the circle much as her mother did. Call it an intuition or a vision thing but Jennifer has a gift and I think her mother had it before her.  Something that labeled both of them as insane. 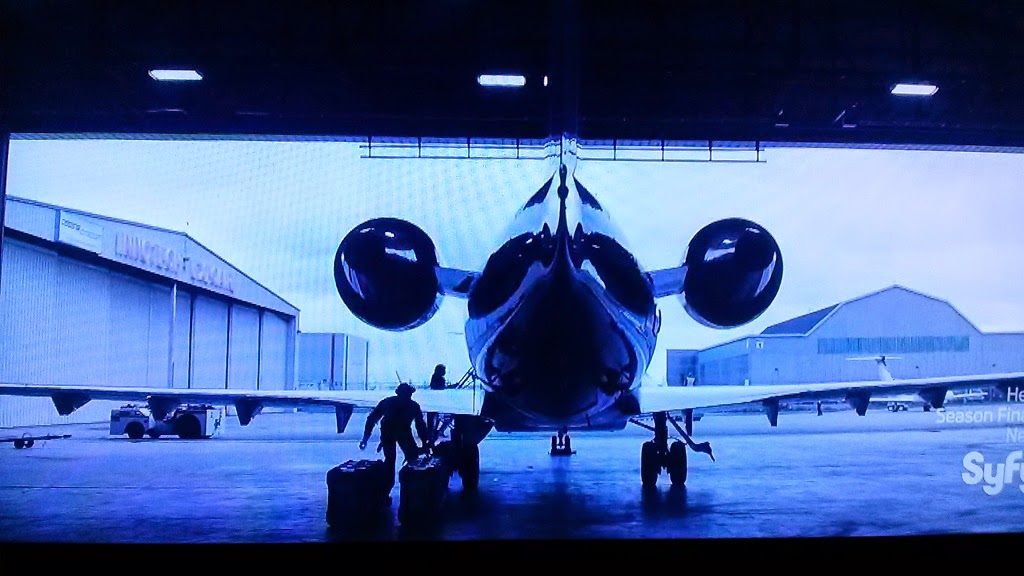 Now, Jennifer works at the behest of the Army and I can't but feel she is being used by them.  She has become the mechanism wherein the virus is to be distributed about the globe.  I think Jennifer sincerely believes she is doing the animal kingdom a favor by acting against the species that is supposed to be it's caretaker.  Sadly, the Army is using her to rid the world of the scourge that is humanity and fulfill their new world order. 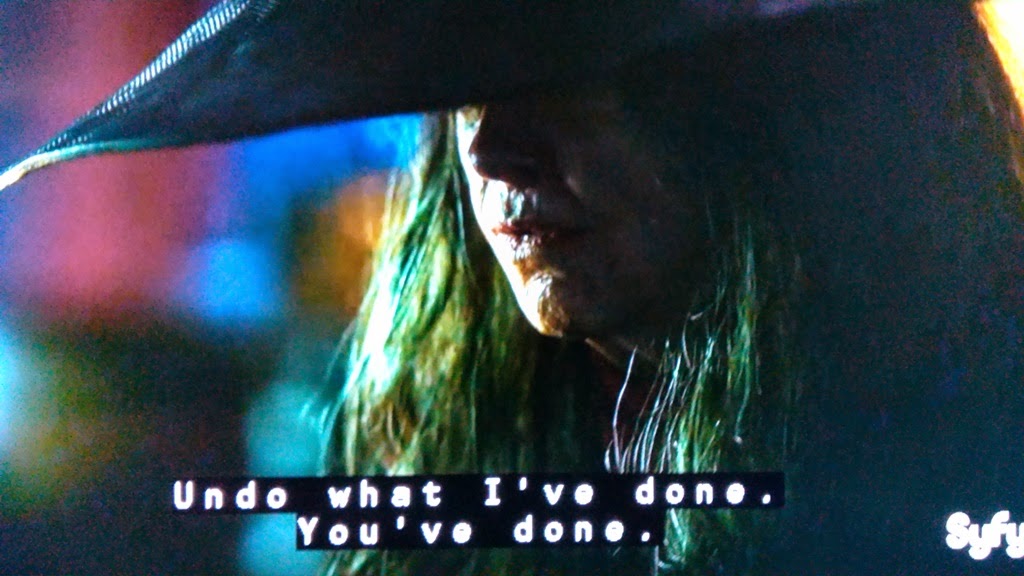 Future Jennifer knows it isn't too late to change this.  She revealed as much to Ramse when he went to visit her "Daughters" encampment.  I guess you could say the "Cycle" showed a few cracks even then. 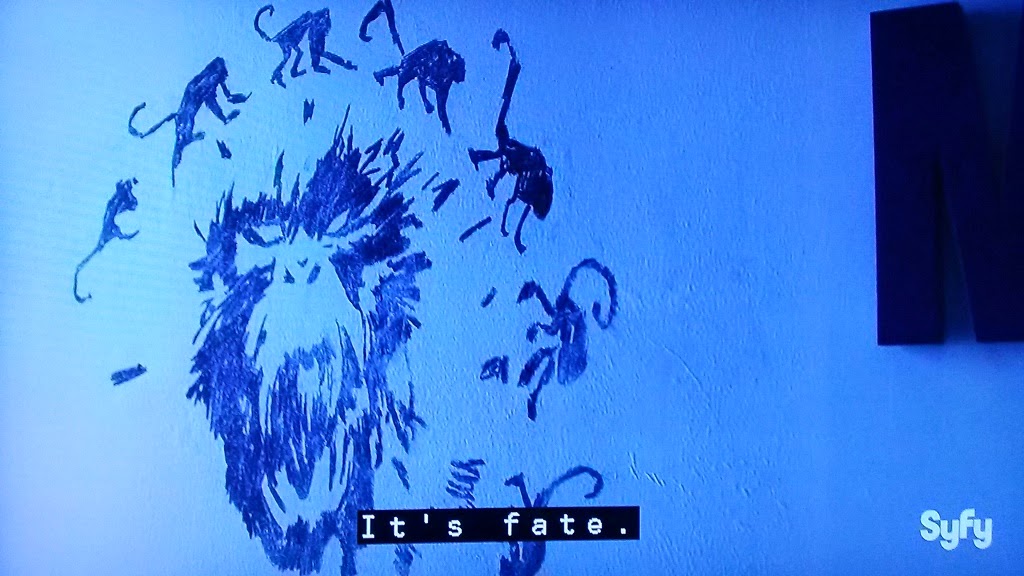 We opened the episode with Jennifer ascribing events to fate.  The off-meds version of Jennifer would never say that.

So, like I said, I've got a few more things to discuss but I will leave that to later plus issue my report card for the season.

Until then, feel the burn! 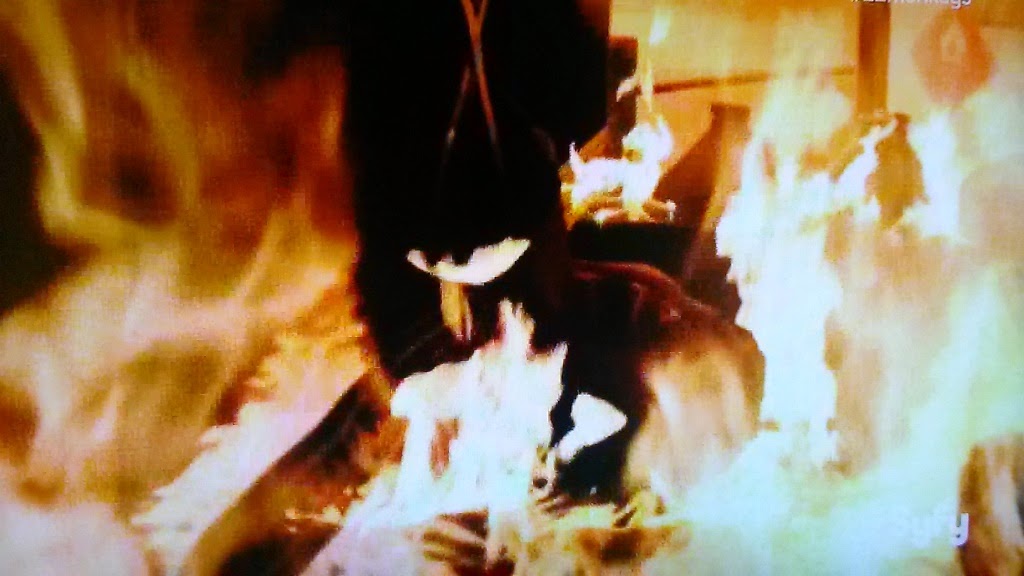 Sorry Noah Bean, I had to go there.