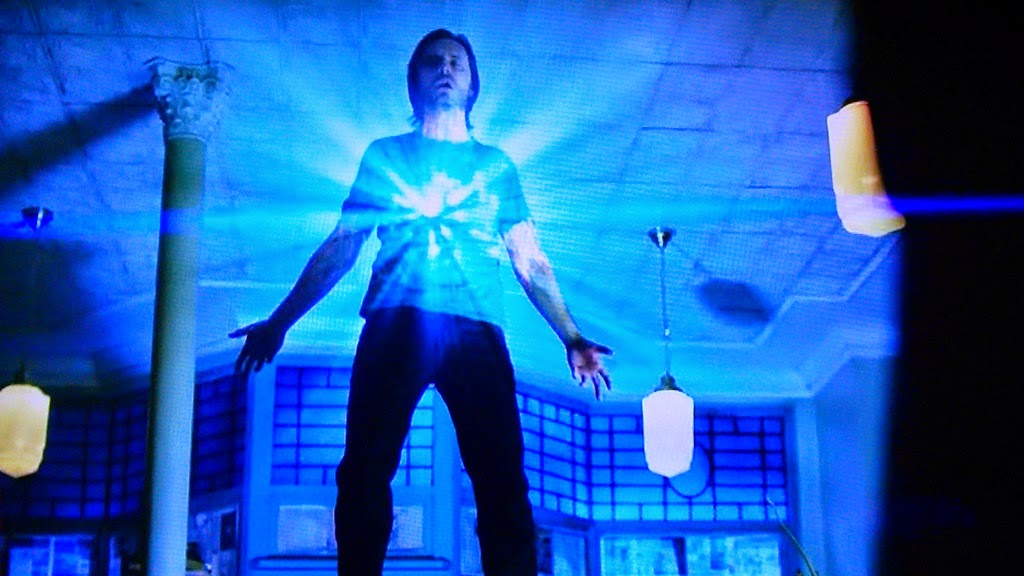 Tonight marks the season finale of 12 Monkeys and like everyone else that has followed this show I'm eagerly anticipating what lies in store for us. 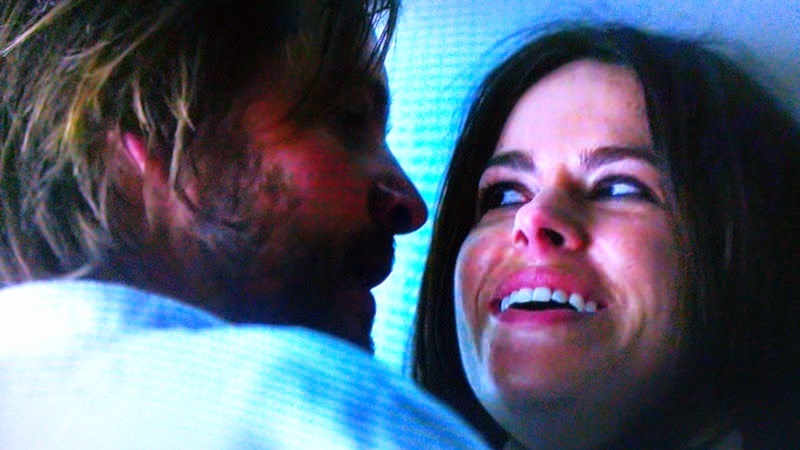 To start, I don't want to be necessarily negative, but the things that bother me about a series sometimes overshadow what I love about a show.  Case in point is everything that has gone on with the second season of Helix.  I'm hard pressed to find anything I appreciate about that show anymore.

That isn't the case with 12 Monkeys.  But there are a handful of things (or less) that I hope I don't see come to fruition.  First and foremost is a possible family connection between Cole and Jennifer Goines.

We know Jennifer's mother is currently out of the picture.  (Is she dead? I can't quite remember.)   Leland Goines fretted that Jennifer's antics reminded him of her mother's.  Something he didn't want to relive.  Thanks to Matthew Cole, we've learned Cole's mother is also AWOL.  Take those two items and the internet instantly came up with James and Jennifer must be related by virtue of the missing mother mathematics.

Hasn't "Luke and Leia" been done to death?

Yes, the Luke and Leia of Star Wars fame.  What?  They're really brother and sister?  Nooo!

Please, no.  This trope has been done already. 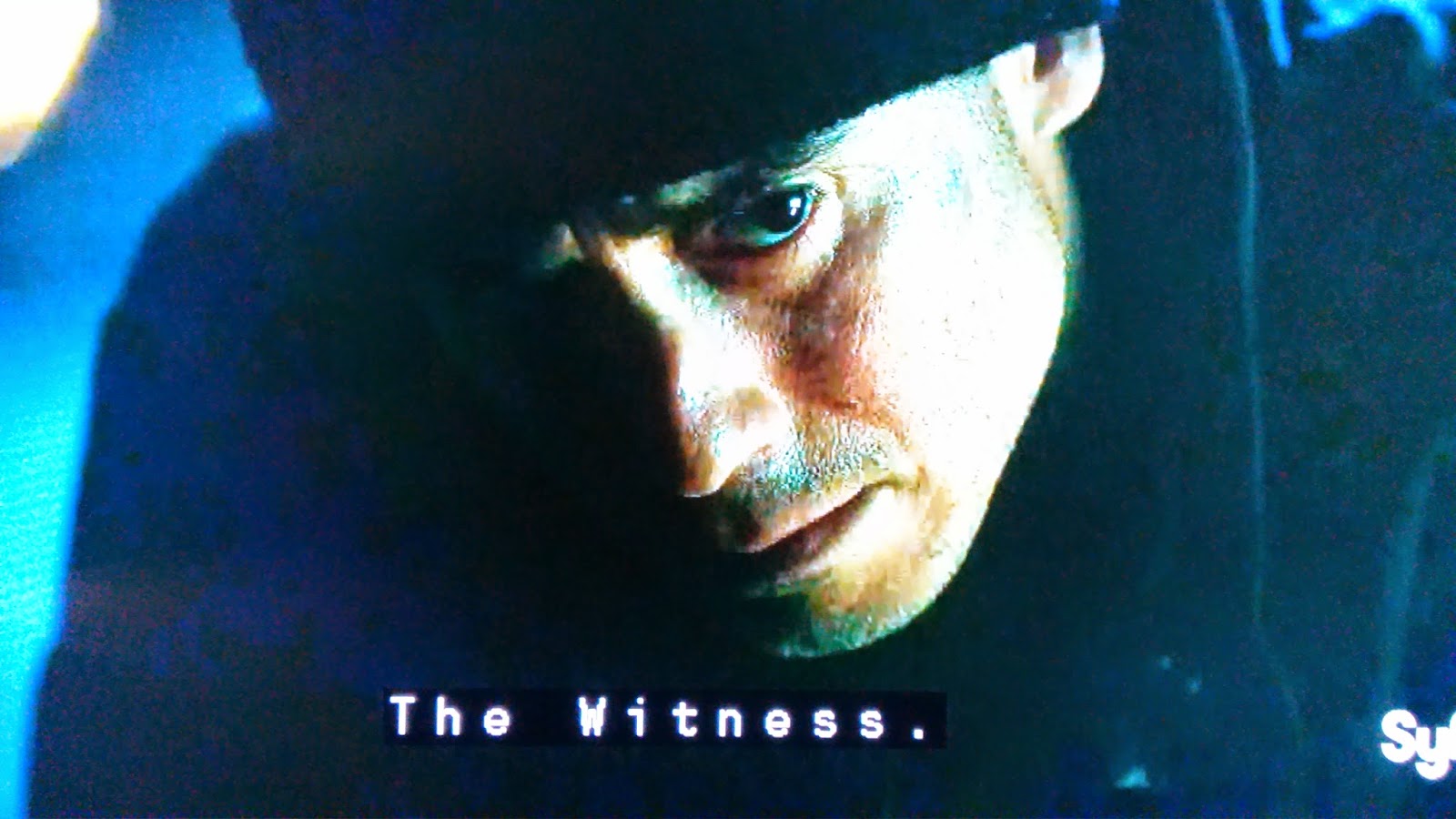 Ramse is "The Witness."

Gosh, I hope not.  Can't he just be "The Traveler?"  Personally, I wanted to see him end up as "The Remains."  He seems to have used up his usefulness as far as knowing every move by Cole and his allies.  I was hoping "The Witness" would be some type of "Trans-dimensional" being.  To use True Detective phraseology, someone that can see or exist outside that "Flat circle of life."  Ramse is a known quantity to lift him to the stature of that inscrutable and mysterious Witness diminishes the threat behind the "Witness" character.  To defeat The Witness should be some sort of Grail Quest not getting Ramse to admit, "My bad" and have him kill himself or be shot by Cole.  That would be to pedestrian. 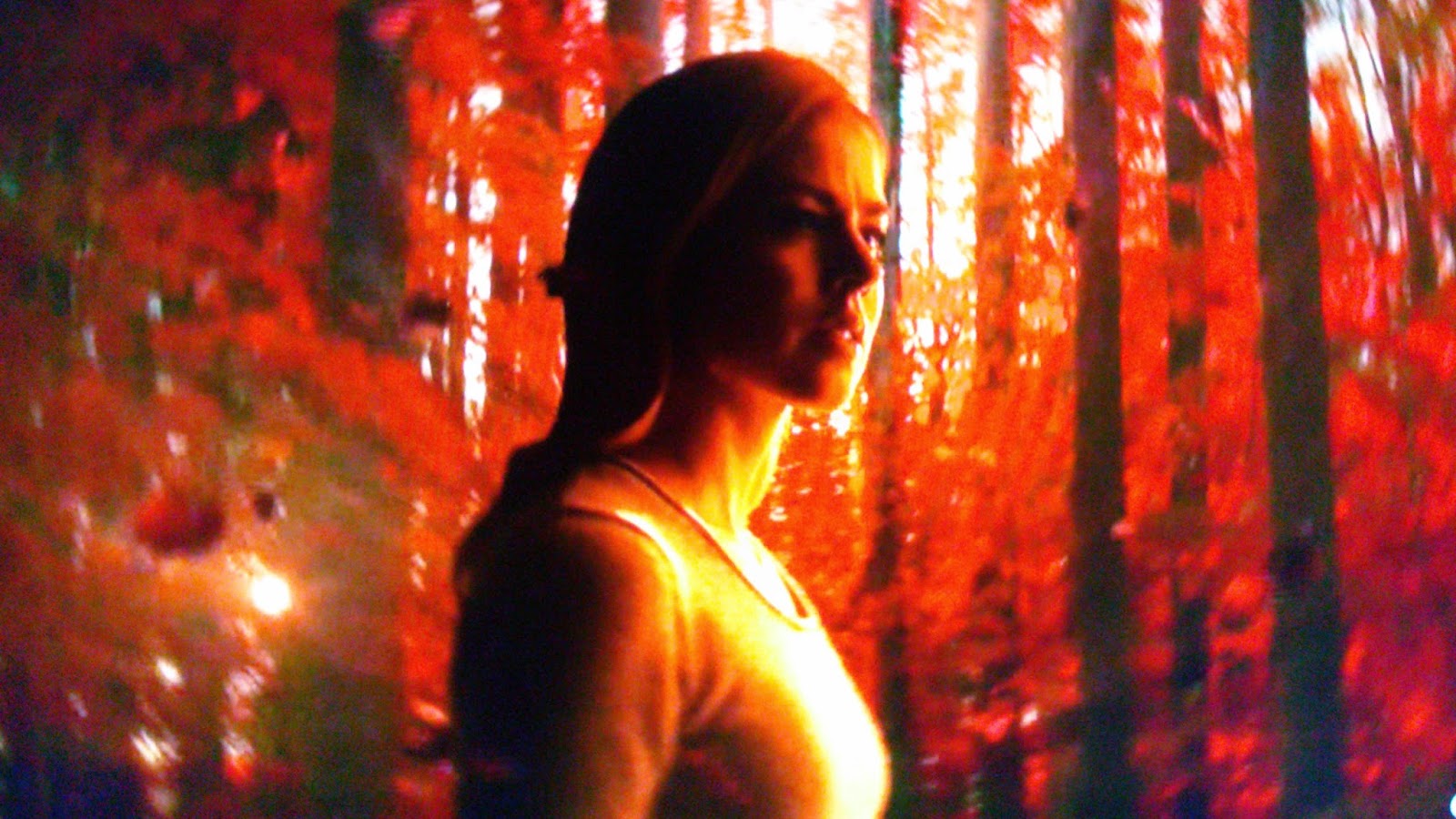 Don't you think Cole should visit "The Red Forest" tonight?  That "place" has gotten quite the buildup.  I've seen one spoiler image (thankfully) of the finale and didn't even remotely involve "TRF."  Good!  To me, it would mean a face off between The Witness and Cole.  Isn't that what we all want to see?  Is it really a physical location or one of the mind?  Something that you can only enter in some sort of fugue state.  You can see, hear and even feel in it but it exists outside our own plane of existence.  Okay, that may be a little unrealistic to expect.  That's my inner bizarre writer spouting off.

Do I want to see the true identity of the Witness revealed? (If it isn't Ramse)  Not necessarily.  I suppose it could be some sort of "Darth Vader" reveal.  The twist would be that Cole is The Witness, a result of his innumerable time travels.  So much so that he's created a "time ghost" version of himself.   A sad ephemeral being haunted by his responsibility to humanity and to the ones he loves.  His very existence is owed to his lack of success in resolving the paradoxes he himself is responsible for. 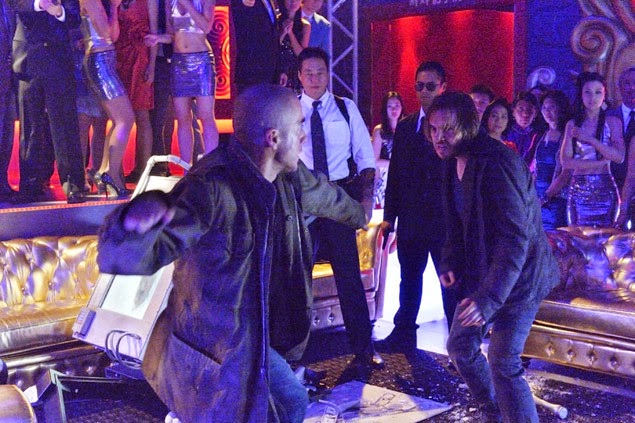 I suppose we all want to see Ramse and Cole settle their differences.  They're the ultimate bromance right?  That stuff doesn't matter so much to me.  Nor does the budding romance between Cassie and Cole.  That has to remain unfulfilled lest you undercut your own dramatic tension.  I suppose something has to give between Cole and Rames.  Does it have to be neat and clean?  I hope not.  I'm all for "strings attached."  Mother Nature doesn't like it when you rearrange the furniture right?

There will be a cost.

Cole has to return to the future too.  Being a denizen of the year 2015 just doesn't suit him.  Sorry Cassie shippers.  (Don't worry he has another flame waiting for him in the year 2043.) 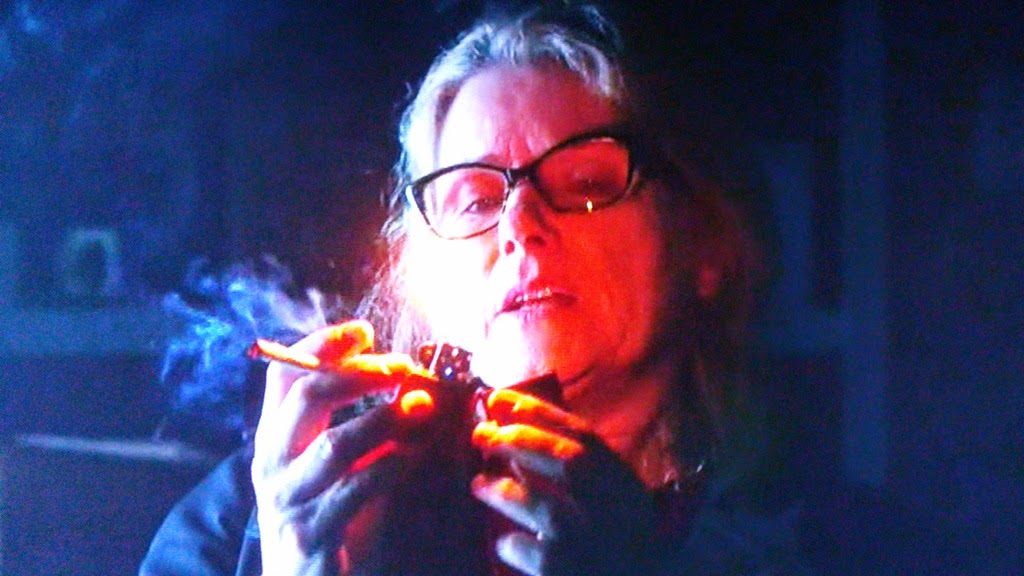 Speaking of paying the piper, shouldn't Jones come up with her pound of flesh?  She's been the master puppeteer and she's set everything on the course we know today.  If anyone has to pay it should be her.  Don't get me wrong, I love her.  But I've always been a disciple of the "Hannah Timeline" theory.  Okay, it's my theory and all signs point to her having to choose between a world that can be saved from the plague or a world where Hannah survives.  I think they are mutually exclusive.  A tough choice for Jones to make.  Will she make the hard choice or fudge it wherein we are doomed to repeat history all over again?  Come on "Iago" make our heads spin! 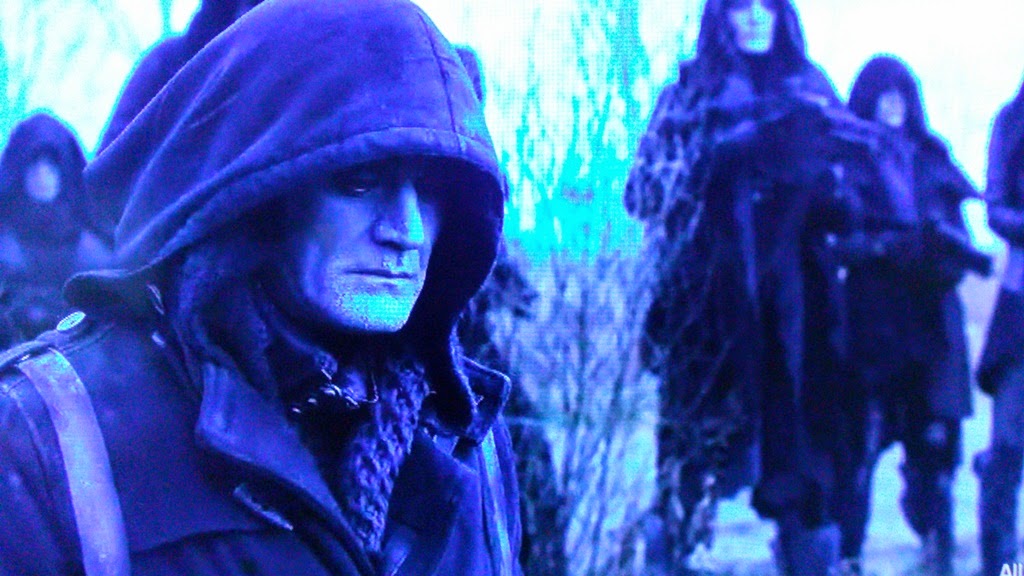 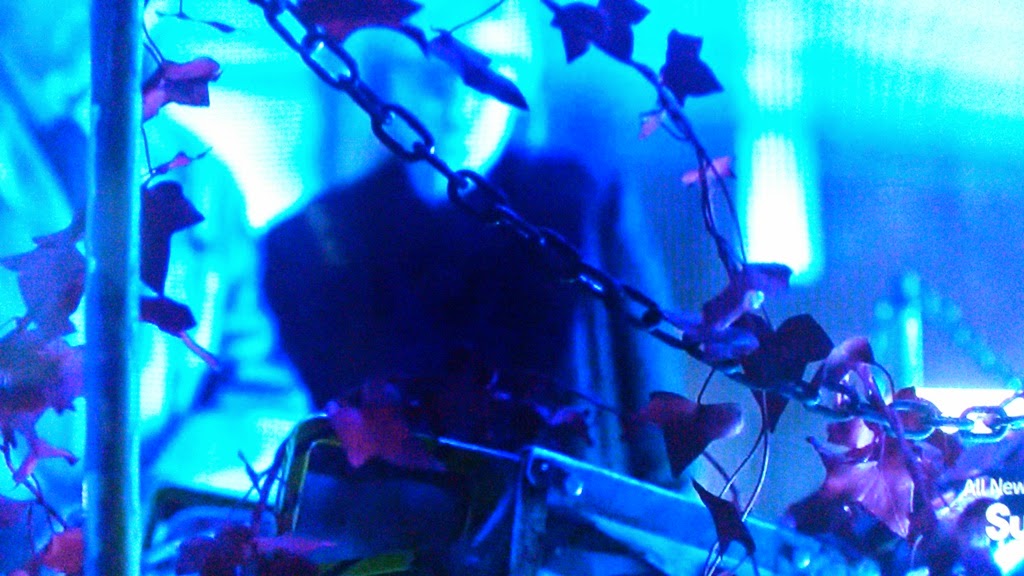 All right how about this, The Ghost Soldiers (Time Bandits?) pictured above are stuck in 2043.  The red ivy also pictured above is from the future.  The tachyon bursts that Adler detected were a result of a tracer sent from the far flung future looking for The Witness or the Ghost Soldiers themselves.  That's why the Ghost Soldiers are looking for a way into the Splinter Compound.  They want to return to their own time or a time that will suit their own selfish needs.  They have their own agenda that exists outside of anything we've seen so far.  Does that make them the Army of the 12 Monkeys?

Ha, I'd be happy if they were just the new mysterious big bad that we'll know virtually nothing about until 2016.  I can wait. 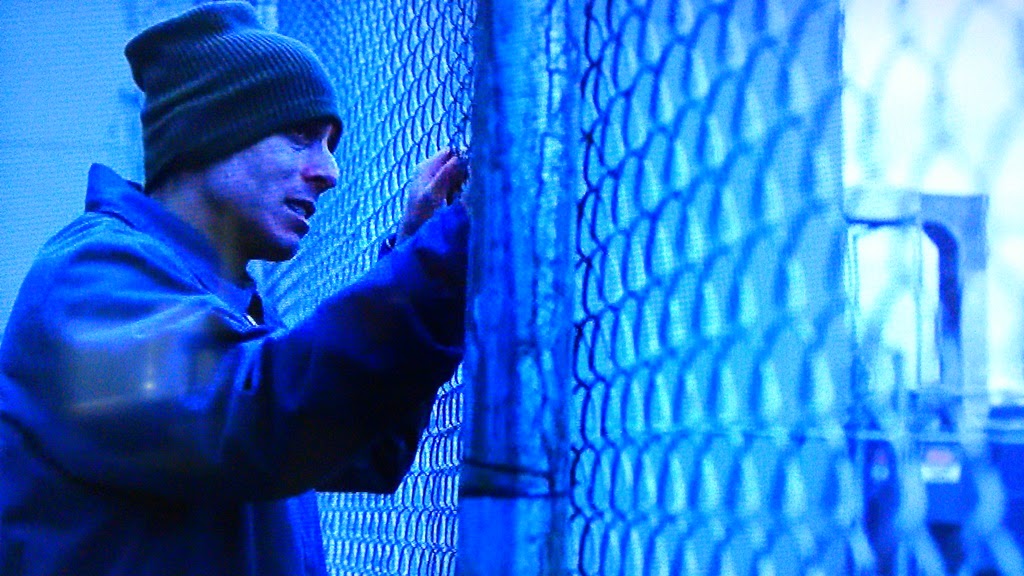 Someone is going to die.  I predict Ramse.  Sorry Kirk.  They can always snatch you back from another time right?  You're alive somewhere in time.  Isn't that true? 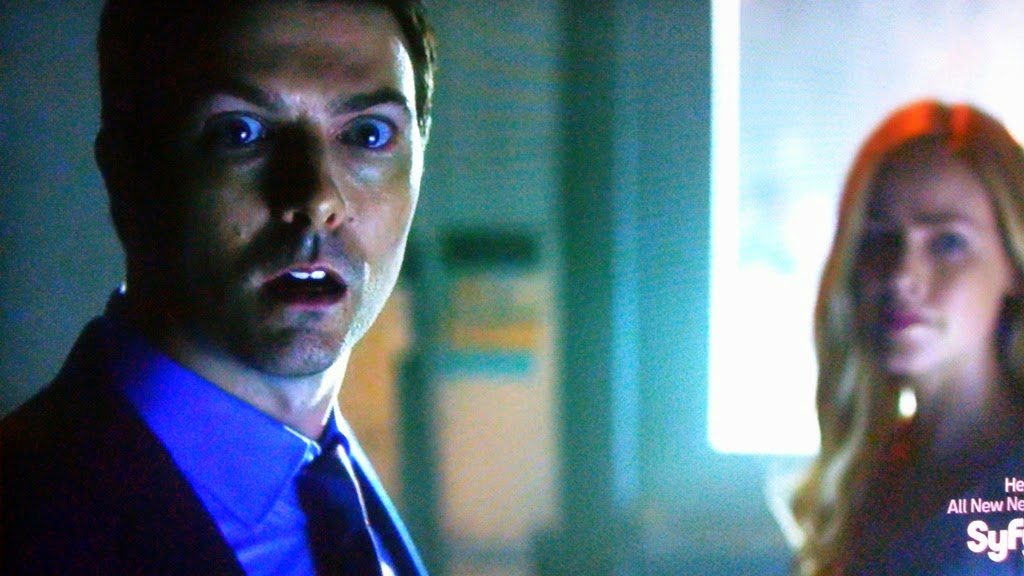 Aaron might bite the bullet but I think he'd better served working to "save" Cassie and undermining mankind at the same time.  Gotta have those guys around! 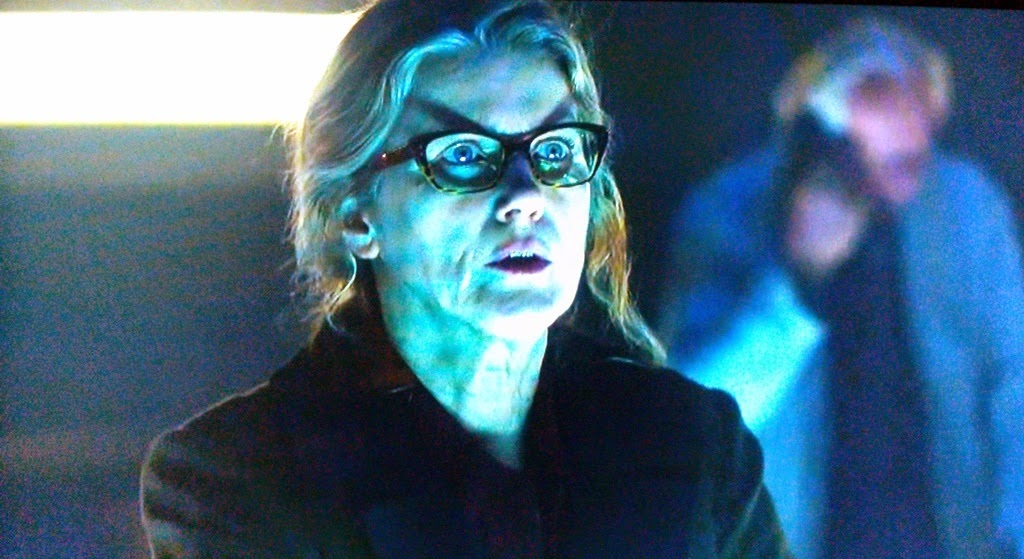 Someone will have to make one.

You know, that choice where there is only one option given.  You either take it or leave it.  I think this will be left up to Jones.  It's a tough one.  Act for humanity?  Act for a loved one?  I think the final scene will come down to Jones having to make the right choice.  She said she doesn't have to believe in God in order to feel his wrath.

I hope we find out tonight.