Sleepy Hollow - For The Birds? 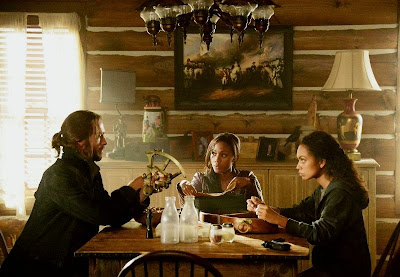 Lest you think I had a problem with this episode because of the blog title, please allow me to disabuse you of that notion.

I liked it quite a bit.

In fact, I thought it the best episode of the season since the pilot.  It was tighter, well directed and the dynamic of the characters was such that they were actually allowed to breath and grow together.

Yes, there was a freak of the week but it was steeped in Old Testament mythology.  A mythology that was also intertwined in mythical Americana.  We know there was a Boston Tea Party but did you know it was just a cover to capture an ancient biblical super weapon?

This is the type of depth of plot that I look for in a series.  Not the slap dash monster of the week that is easily vanquished in 50 minutes.  There is a richness to appreciate in the storyline when obscure and well know historical facts are turned on their heads and thrown at us in a new way.  The audience is tantalized by this "new " look at historical facts and we giddily accept there may be some truth to these new revelations. 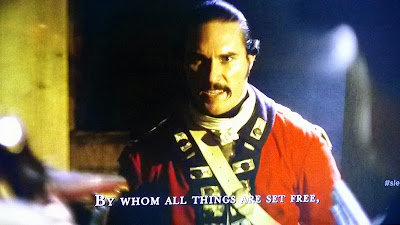 For another example, take a look at the new information presented to us about the Hessians.   We know them as mercenaries employed by the British in the American Revolutionary war to fight the Colonists.  We now know they are part of an ancient society dedicated to the resurrection of Moloch and his demonic minions.

Those guys just went from bad to worse!

(Prediction time, the Hessian pictured above is our Headless Horseman to be.) 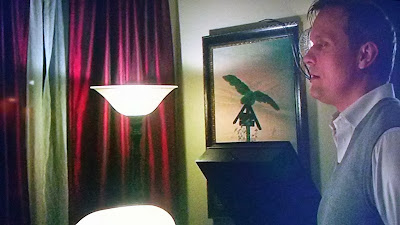 As to why this blog post was titled, "For The Birds"?

We see our modern day Hessian, Gunther, giving piano lessons to an unsuspecting youth.  Gulp!  Didn't Crane say that at the end of the episode that Moloch was the Demon God of child sacrifice?  Do you suppose the lessons are a pipeline for demonic sacrifice?

Take a look at the print behind Gunther, a crow like sitting atop a venerable road sign of the European type.  Rather spooky I'd say. 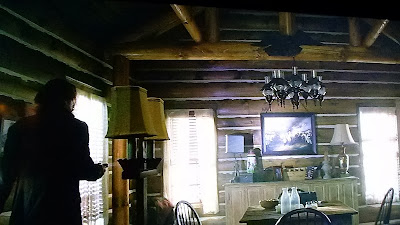 In our next image we have the classic American eagle posted along the frame of the Sheriff's cabin.

It seems we have a duality of meaning attached to out feathered friends.  The grim crow connected to the Hessians and the patriotic eagle related to our heroes.

We even get an auditory reference to birds as we hear wings fluttering when the surviving Hessians enter the decepit Dutch church.

So why birds, what do they mean?

To me they can suggest a couple of things.  Birds were often associated in ancient or Biblical times as messengers or harbingers of doom.  That certainly fits with the thematic take on the Hessians.

Birds also suggest flight or the freedom of flight and that fits in nicely with the theme of our heroic demon fighters and the Revolutionary War. 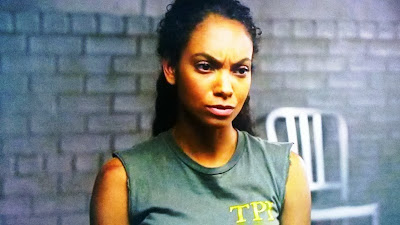 When I wrote about the TV show Fringe, I took a close look at all the visual imagery.  Some I chased down a rabbit hole that led to nowhere and the others were quite meaningful.  This hasn't been the only episode of Sleepy Hollow to use the imagery of birds but that doesn't mean there is something to it all.

I will submit to you all that it did have special meaning for this particular episode.

Take Abagail's sister Jenny pictured above.  Wasn't she once institutionally caged like a bird only to be granted the freedom of her wings thanks to her sister?

(Another aside, Lyndie Greenwood in great as Jenny.  Can't you picture her in the lead role of Abbie instead of Nicole Beharie.  In fact, reverse them, I think it works a lot better.) 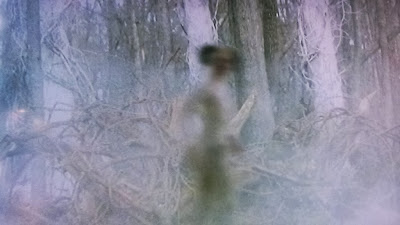 In closing, I'm glad the "Blurry Man" now has a name, "Moloch".  As stated before, "The Demon God of child sacrifice."  That doesn't bode well especially when previews suggest we get a child-out-of-time in the next episode.  If you are a Fringe fan, shades of "Inner Child".

See you next week!