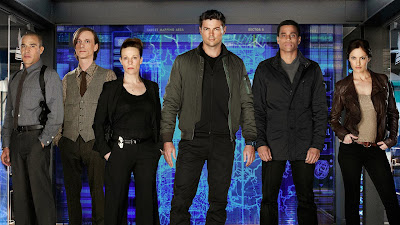 Phew!  Where do I start?

I'm one for picking out references to movies and or TV shows and how they figure into what we are currently watching.  For the TV show, "Almost Human" there were references aplenty!

Where do I start?  OK, how about Continuum. 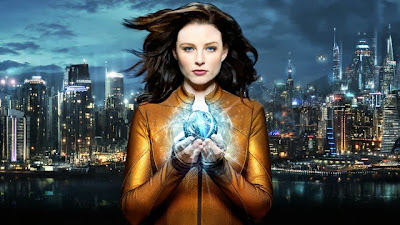 Gleaming ultra modern cities are always the architecture of the future.  Which really doesn't jive.  How can these impossibly glamorous cities exist when crime and or terrorism is so rampant that society is almost dysfunctional.  Who pays for all of this when things are so bad? 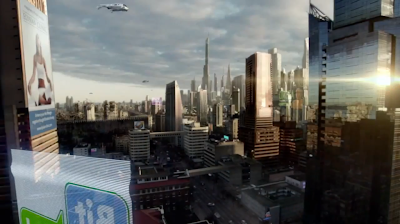 Well, that didn't stop the creators of Almost Human.  Crime is at a record high (up 400%) and the future looks impossibly utopian.  Maybe it is the crime syndicates that finance all this wonder.  Now that would make sense. 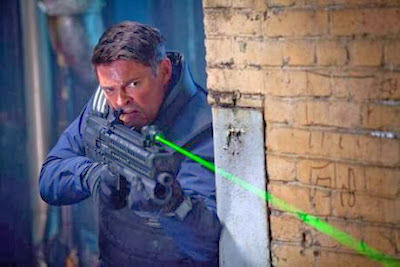 One of the first shots we are treated to is looking down the barrel of a rifle as the police conduct their raid.  I wasn't able to grab that particular shot but it looked something like the game screen grab below. 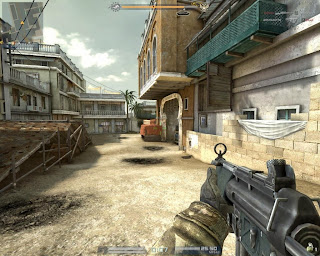 To me it was an obvious attempt to appeal to the gaming crowd.  Many games are "first person shooters" and it looks like Almost Human wanted to capture the cool factor amongst those viewers.

Speaking of police raids, when that scene, which is a flashback, and subsequent scenes are enacted it is reminiscent of the the cult hit "The Raid" which came out of Indonesia back in 2011. 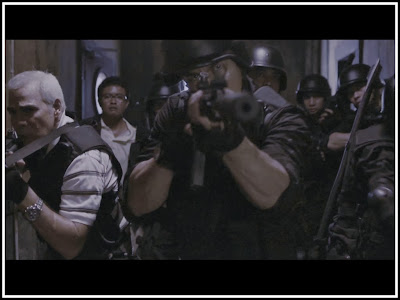 Sure, there many police raids on film and TV but if you want to appeal to the younger crowd then you have to stay with something that is cool and current and that would be "The Raid".  The bunching of the police squad coupled with a tight closeup looking down the barrel of a rifle was clearly reminiscent of The Raid. 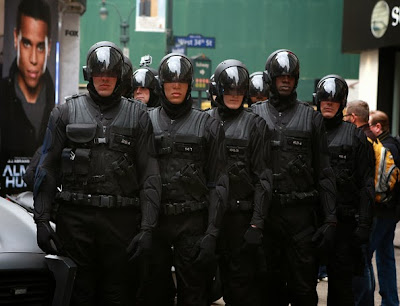 This leads us directly to the cops themselves, specifically the android kind.  When I look at the MX cops I immediately go to "I Robot" the Will Smith vehicle. 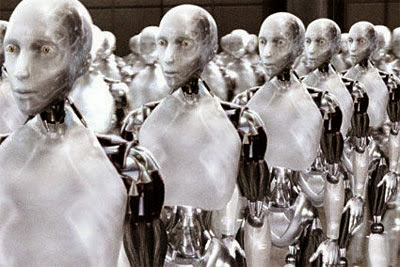 Quite similar aren't they?  I wonder when the crime syndicate will gain control of the city's robotic police force and turn them against the populace.  You know it's coming.

The comparisons to "I Robot" don't end there. 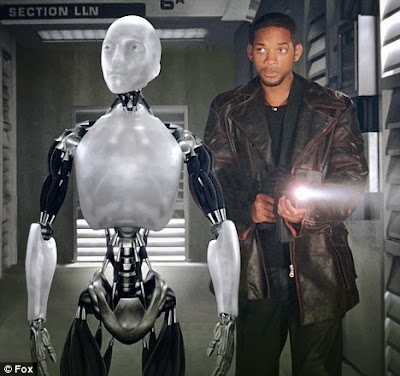 The pairing of a human cop with a robotic partner is hardly new.  Will Smith had an android buddy too. 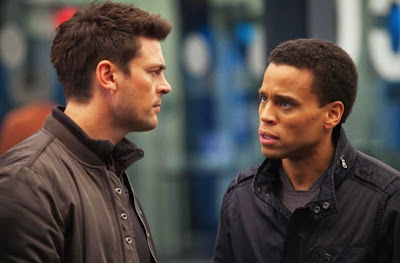 Not that there is anything wrong with that.  It's just that it has been done before.  Here's hoping Almost Human puts a new angle on it.  Judging by the second (and much better) episode, they do. 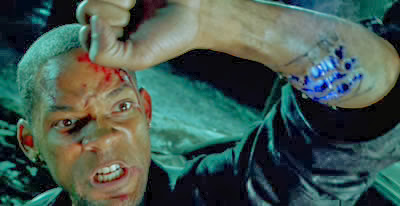 We're not done with "I Robot" yet.  Like Del Spooner, Karl Urban's John Kennex has a cybernetic extension.  I guess they had to make it the leg for Kennex because copying Will Smith's arm would have been too close. 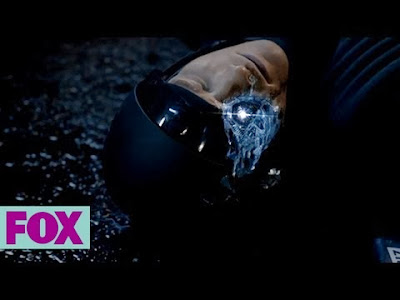 Let's skip away from all the I Robot influences and get to a quick "Alien" homage.  See the "dead" MX in the picture above.  (We're going to see a lot of dead robots this season I fear.)  There was some white goo dripping from the android when it was shot.  I guess the goo doubles for blood.  We've seen this before too with the Android, Ash from "Aliens". 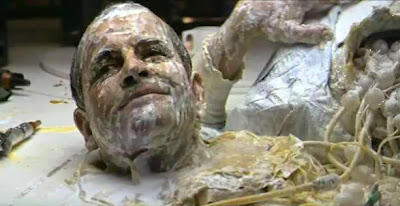 Can't have an android without the white goo.  Blood red would be too graphic I'm guessing.

Can we swing over to "Blade Runner"? 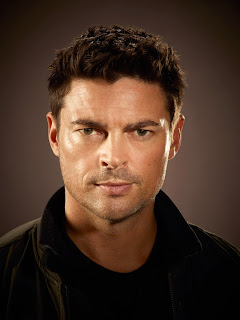 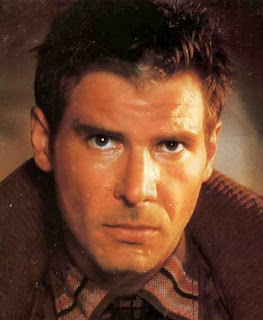 These two head shots of Kennex of Almost Human and Deckard of Blade Runner are remarkably similar.  I don't think it is a coincidence.  I'm sure Wyman and the rest of the people behind Almost Human want people to, subconsciously at least, make the connection between the two properties.   Wyman borrowed from Blade Runner during his Fringe days and it is fertile ground.  If you are going to explore what is to be human why not go to the best source. 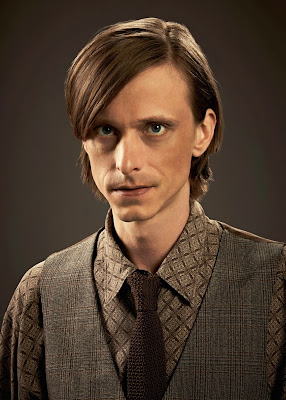 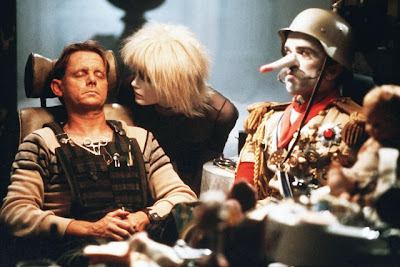 Both are odd ball loners that work in the eerie labs filled with creepy experiments and the detritus that goes along with it.   In the second episode of Almost Human we get an inventor that is into pleasure Bots.  His name?  Sebastian.  Coincidence?  Nope.

It was almost too good to be true to true to see Kennex sitting at a noodle bar.  So Blade Runner.  So obvious also.  Nothing wrong with a direct homage.

Ok, ok you say you're sick of the Blade Runner references?  I guess I'll skip the Pris comparisons to the Bang Bots from episode two.  (You can spot Pris in the picture above with Sebastian.)

How about a little Mad Max? 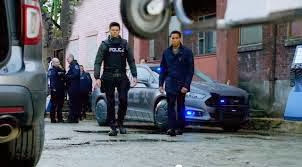 Did you get a load of the police cars from the Almost Human future?  Pretty cool yes?  Dark, souped up, menacing and built for speed. 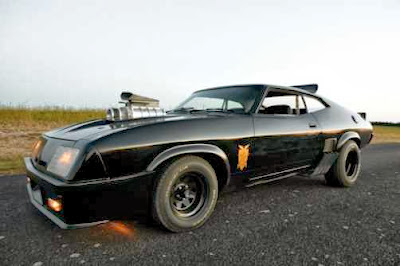 Kind of like the "Interceptor" that Mel Gibson drove around in the original Mad Max.

Is there anything else Almost Human borrowed from the big screen?  Yes and it a JJ Abrams property!

Mykalon Red is a McGuffan for Almost Human.  It's the stuff that threatens to bridge the gap between what is Human and what is Robotic. 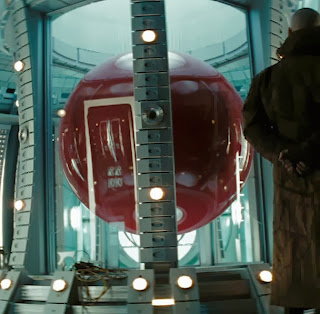 I guess JJ likes the color Red because in his original Star Trek remake, Red Matter, was the stuff that made the universe go 'round.  Whatever works! 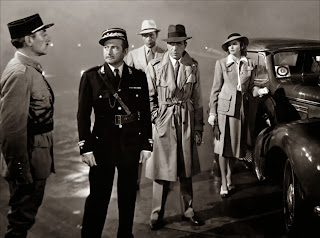 Sure I can.  Minka Kelly's Detective Stahl did mention she was going to round up the "usual suspects".  Shades of Letters of Transit, Casablanca and Fringe.  Ah, the good old days.

Am I disparaging Almost Human from borrowing so heavily from all these properties?  No, what are you going to do?  It's all out there and you have to get your inspiration from somewhere.  I thought the episode was a decent start and it improved by leaps and bounds for it's second episode.  I should get to that in a couple of days.

Next up is Sleepy Hollow though!

Did I miss anything?  What did you people pick up? Write back soon, its lonely in my lab tinkering with sex bots.  (Hey, did Woody Allen already do that?)