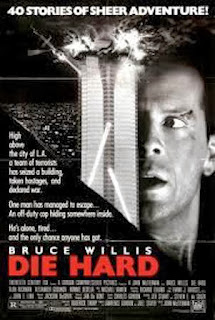 Almost Human followed up it's seminal episode of "Skin" with something more pedestrian, "Are You Receiving?"  Not that it was a bad episode per se.  It did borrow heavily from the original Die Hard movie with people falling out buildings, cops sneaking around unknown, furtive and secretive communication with the police and so on.

If your going to borrow from something you may as well borrow from one of the all time heist classics like Die Hard.  Yes, we even had the crooks doubling as terrorists in this one.

Whatever.  The best thing was the other movie reference.  Did everyone catch the Star Wars quote?  "Boring conversation anyway" as originally done by Han Solo and repeated here by John Kennex.  Does that mean Karl Urban will be in the JJ Abrams helmed movie?  Loved it.

So anyway, AH was ripping off Die Hard in a standard police procedural.  Let me get to two quick things before I get to what I thought was very interesting for this episode.  When John went to pick up Dorian did anyone else wonder where Dorian sleeps?  Does he have an apartment or is he staying with Lom?

The other strange thing I noticed was the huge black ball rolling down the highway when John and Dorian were responding to the call.  What does the giant ball do?  Is it something like the giant orb from the 60's classic, "The Prisoner"?  Hopefully we get more giant black ball.  (Just not on my highway.) 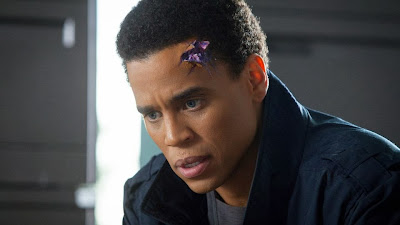 OK, let's move on.  I am officially worried for Dorian.

Here's why, I spotted this quote on io9 today and it is very revealing to the state of mine of Dorian as told by Michael Ealy.  The questioner asks Ealy about Dorian's greatest flaw.....

Why does this bother me?  Did you see Dorian when he was riding back from the scene of the crime with Kennex?  He looked absolutely sick (Ealy is great here). I thought there was something legitimately wrong with him and he was going to suffer a huge meltdown in the car from his battle damage.  Thankfully, a little "Benny and the Jets" brought him out of it.  (That song was stuck in my head as I commuted this morning.  Fortunately there were no giant black balls to pull me over for singing so badly.)

Dorian apparently is going to suffer from depression.  He really looked depressed to me as they rode along.  Again, Ealy really sold it. 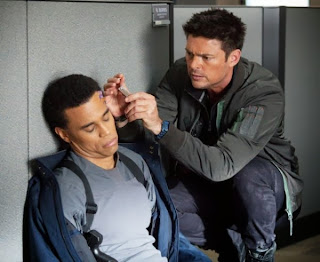 Wouldn't you be depressed if you could be repaired with chewing gum?  (ABC gum at that!)  I find this absolutely fascinating.  A clinical struggle with depression by an android.  Yes, we've seen Data and Spock of Star Trek struggle with their humanity but depression?

I think Ealy can pull this off.  It makes me sad just thinking of the possibilities and how Ealy is going to portray them.  Anyone who knows someone that suffers from depression knows what a black hole it can be.  This will be a very interesting case study.

I'm not saying we'll see Dorian's depression front and center for every episode but it will be lingering there just below the surface.


What are your thoughts?