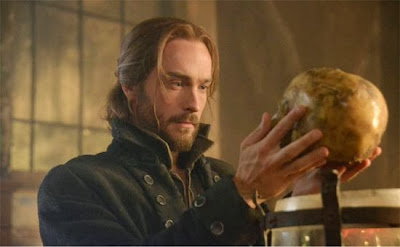 "Alas, poor Yorick! I knew him, Horatio; a fellow of infinite jest, of most excellent fancy; he hath borne me on his back a thousand times; and now, how abhorred in my imagination it is! My gorge rises at it. Here hung those lips that I have kissed I know not how oft. Where be your gibes now? Your gambols? Your songs? Your flashes of merriment, that were wont to set the table on a roar?"(Hamlet, V.i)

Skulls abound in the most recent episode of Sleepy Hollow, "The Midnight Ride".  Do I think the writers were trying to make a direct connection to  Shakespeare's famous play, Hamlet?  No, but there is something to the allusion between the impermanence of life and the "vile effects of death" that thematically run through each episode of Sleepy Hollow. 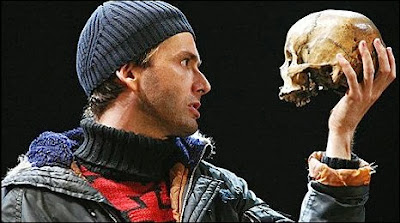 Hamlet is perhaps the most famous of Shakespeare's plays, and it's protagonist struggles with the loss of loved ones and the ghosts that haunt his conscience as he strives to find his place in the world.

You could say the same of Ichabod Crane.  Albeit his ghosts are of the more tangible variety.  I thought this a most humorous episode but there was a poignancy behind Ichabod's pain when he discovered the loss of his Mason brothers.  He looked truly shocked and once more a connection he felt to his past was taken from him.

Hamlet is a tale of revenge and is steeped in bitterness and treachery.  I don't think Ichabod has reached that nadir yet but there are times when his loneliness seems to take him to a place where the "undiscovered country" of death is preferable to his current state and "to sleep, per chance to dream" is a thematic device where Crane most often finds his connection to Katrina.  He best be careful because that sleep of death is a bourn from whom "no traveler returns."

I think the writers will continue to dance around Crane's struggle with death, loss and loneliness but the show seems too lighthearted to go too far with it.  Yes, Wyman and Abrams steer the same ship here as they did with Fringe and we all know Fringe wasn't afraid to go dark but methinks it won't happen here. 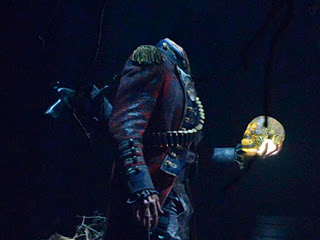 Hamlet's most fearsome opponent was his own conscience and sense of guilt.  In contrast, Crane's most fearsome opponent is a being that harbors neither of those emotions.  Yet, as we see in the picture above, the Horseman is also beset with loss.  Like Hamlet and Crane he is incomplete.  Unlike either, he is completely inhuman.  I wonder if, while staring at the fake skull meant to lure him, he got the joke.  Probably not, being death incarnate probably leaves one without a sense of humor.

Too bad, the humor that Yorick embodied is what Hamlet found most endearing and the humor on display as Ichaod and Abbie sought to destroy the Horseman's head was probably the funniest part of the show. 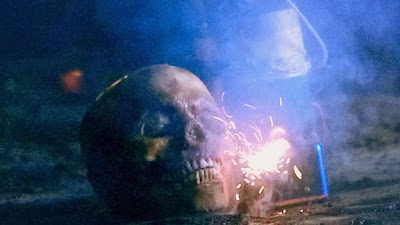 From explosives, to acid to sledgehammers the skull of our headless friend was well nigh indestructible.  Thankfully our heroes learned one does not defeat the Horseman by crushing his skull but by trapping him and "transforming the moon into the sun." 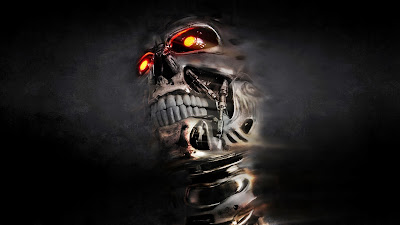 As that entertaining tableau of incessant skull pounding proceeded, I was reminded how difficult it was to defeat the Terminator.  (In fact, the Terminator skull is reminiscent of the Horseman's skull.)     Sarah Connor and Kyle Reese tried everything they could think of to stop their own avatar of death.  Only theirs was born of the future while the Horesman is a denizen of the past.  Yet, the evil that each monster carries with him is timeless and is comfortable in any era. 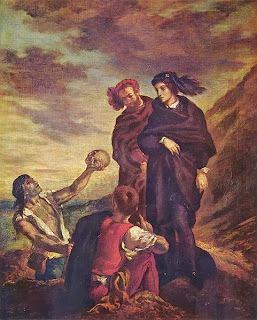 Will we see more of the contemplation of life and loss?  I have no doubt.  Crane will continue to be torn between two worlds and I will keep looking for these thematic cues.  I think we can take heart that it won't be overbearing and Sleepy Hollow to become a dreary dirge.  They're having too much fun!

Okay, now for some odds and ends. 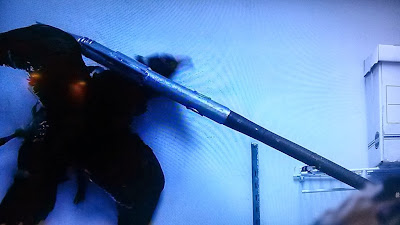 This week's bird sighting was both funny and grim.  There's nothing wrong with a little dark humor.  Squawk! 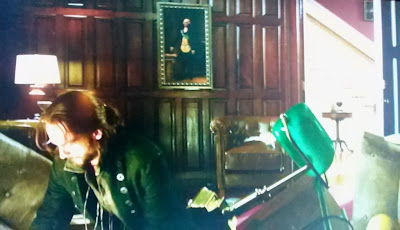 I counted at least three paintings or images of George Washington in the background of some scenes.  I wonder if that is portentuous. 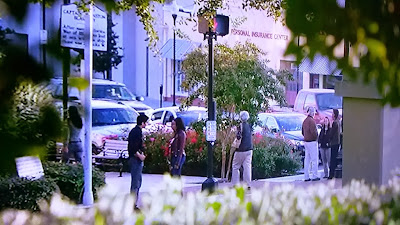 Here's another favorite device of Abrams and Wyman the "No Crossing" signal.  It was quite prevalent in Fringe and it usually was emblematic of the dangers of crossing between universes.  Here, perhaps it is a warning for Abbie not to rekindle her old romance but it could have more deeper significance as we go on. 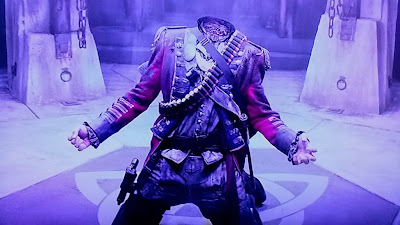 I'm sure I've left out plenty.  What else did anybody else catch?  Next week's episode looks great.  How can they possibly keep Death in chains?  Will Moloch come to the Horseman's rescue?  If so,  will he hold his own hostage in exchange?  Who will it be?  (Did they say Jenny will be out soon?  Uh-oh!!!)