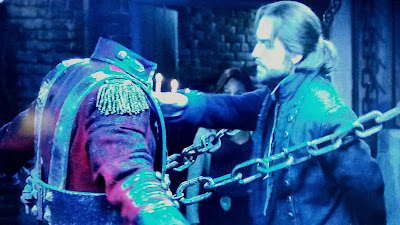 I thought this last episode of Sleepy Hollow, "Necromancer" was another fine entry into the series.  It was a little lighter with the humor, the stakes were higher this go around, the acting was good to very good (in other words Abbie's personality wasn't all over the place) and we got a wider involvement from an assortment of characters.  No problems right?

Ok, there was one slight problem and everyone has been talking about it.

I thought Death was Death.  You know, some dark avatar that stalks humanity and forces us to meet our inevitable end.  Without mercy and with great finality. 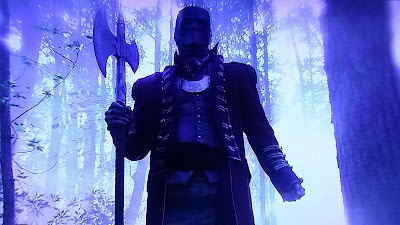 We are talking the Four Horsemen here right?  Beings of Biblical proportion?  Not an ex-running buddy that you had a tiff with over a lady fair.

I've pondered over this.  We know this was Moloch's doing and Moloch is the ultimate puppeteer. (Every show we love seems to have one.)  What if Moloch can summon Death or any of the Four Horseman but in order for them to do his bidding they have to embody or inhabit a living being in order to walk this Earth?

I'm a bit torn over the spiritual embodiment of the Four Horsemen.  I've always seen them as ghostly figures.  Beings from another plane of existence that will someday inhabit our own in whatever form they choose.

What if I'm wrong.  What if they can't walk the Earth unless they are humanized.  This isn't exactly the end of humanity and I always thought the Horsemen came at the end.  Here they seem to precede the end.  Maybe that is the diffrence and maybe that is the way Moloch has to play his hand.

So let's extrapolate upon this a little further.  Let's say Bram/Death gets his head back.  That's supposed to mean big trouble.  But what if it also exposes a weakness?  What if the return of Bram's noggin further enhances his humanity.  Yes, he will still be all out evil and vengeful but he will be more of his own man.  And if he becomes more of his own man then he will be come less of Moloch's puppet.

That would throw a monkey wrench into Moloch's grand design.  One of the Four Horseman riding around pursuing his own agenda.

Right now the demons have brought Bram and Brooks back to Moloch.  The Sleepy Hollow Scooby gang still have the head and they've come to realize that Katrina is the key.  (The new and improved Katrina.  I liked the humbler version better but that is another misstep for another blog.)  Has Moloch outwitted himself? Or is this all part of the master plan?  Ichabod seems pretty close to the edge.

I'm saying here that the Horseman will get his head back and it will give him voice.  With it he will demand satisfaction.

A duel will ensue.

Fate will be decided great and small.