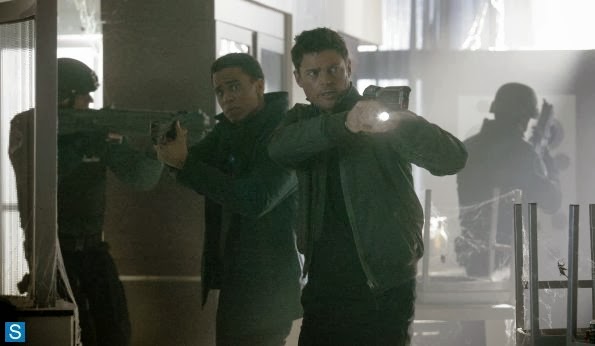 "Kennex and Dorian investigate a guy who straps bombs to his victims necks and puts their final moments on the internet.  I'm officially scared of this show's writers room."

I wonder what that is supposed to mean, specifically that last comment?  Is the reviewer, Jessica Shaw, unfamiliar with the real life collar bomb victim, Brian Douglas Wells from 2007's sad episode, or is she expressing her distaste for the writers subject material?

What if there is a third reason, that Shaw thinks the writers have become stale already and they are cherry picking real life tragedies because they can't formulate their own plots? 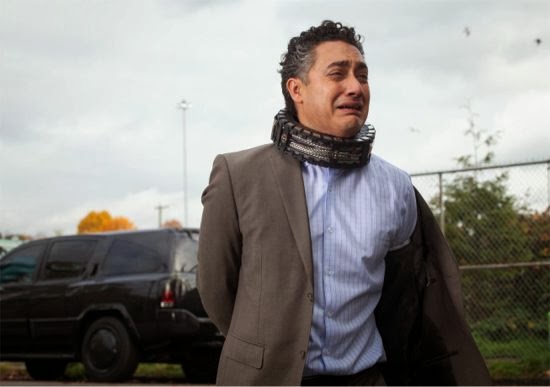 I fear it may be the last reason but I'm also aware I might be projecting my own concerns.

Almost Human has a unique story to tell.  They have a huge slate to explore specifically what it is to be human and what it is to be constructed by humans.  Existential crises, angst, guilt, prejudice and little things like whether you have a soul or not provide a great wealth of material but oddly enough we get a rehash of it's sci-fi predecessors and the re-spinning of real life events like the story above.

I have been guilty of attaching great importance to the themes explored on Almost Human and I can only hope the writers are keen on investigating the same themes I've dissected.  If not, then we are in for more re-hash and re-spin and that would lead to a short shelf life for this show. 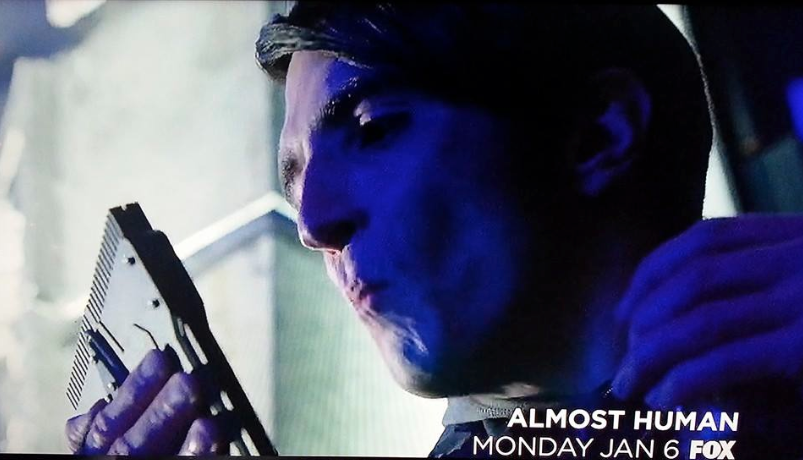 Let's take a look at "Simon Says" and hope the writers are following the same vein as I and not just turning out the schlock.

If we are to look at this episode as a study of the human condition then we are looking at it's dark side.  Simon Lynch has taken to seeking revenge against those who have wronged him by attaching bombs to them because he feels rejected or unloved.  His gambit appeals to our lesser angels where we are fascinate by watching train wrecks and cheering for a grisly outcome because we can hide behind the anonymity of the internet.  To say this doesn't happen in real life would be naive.  Unfortunately, the internet in our real world is a haven for those who wish to hate and espouse selfish rancor.

Almost Human taps into this hatred by picking to real world targets such as the banking sector and the police force.  (So maybe the writers are in line with my own thinking.)  Love and rejection are two very human emotions and to see the character of Lynch play them out with a criminal twist is chilling.  If we are to explore this plot further (which I admit I do to at some extreme) then we also see a god complex at play here.

Simon Lynch becomes the master puppeteer and he pulls at peoples strings by making them dance for him (in Jeanie's case literally).  Only, this is a dance of death because he holds the power of life or death over them and can end it all at a whim with the rest of (the internet viewing) humanity watching him.  This goes back to my previous discussions of the "Angry" or "Indifferent" God.  We get a slightly different angle at this morality play but it is ground well trodden as we have already seen it play out in the annals of Fringe and Almost Human previously.

Careful of the re-hash and re-spin writers room! 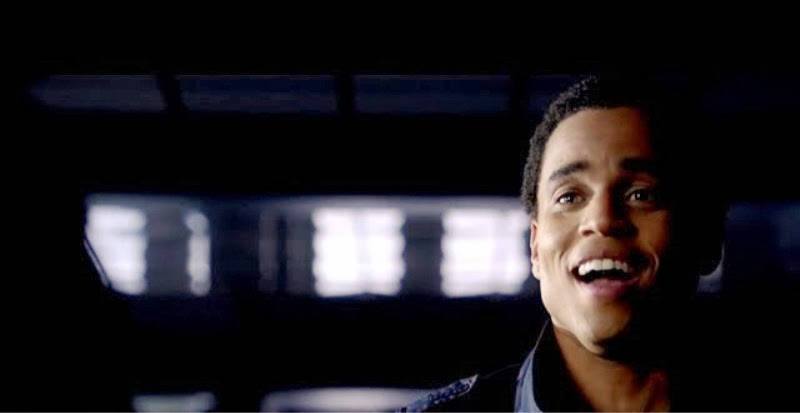 In this particular episode we get a new spin on his fractured humanity.  Dorian is left with a partial charge.  We get a hint there is a prejudice against because him because the MX's get priority treatment.  Fellow policeman "Paulie" gives preferential treatment to the others because of his disdain for Dorian and Kennex.

Dorian's character takes a hit here because his low energy mood swings are played for comic effect.  Instead of exploring a serious condition such as Bi-polarism, Dorian smacks Paulie across the jaw and then giggles like a school child wishing to make it all good again.  Dorian deserves better.  As a being wishing to become more human we've seen him struggle with depression and loneliness.  To see him portrayed as a broken toy does his character a disservice.

I also resented Kennex referring to Dorian as a "Happy Toaster" which would normally hurt Dorian deeply but perhaps the writers were trying to weave in another Battlestar Galactica reference because they had Alessandro Juliani of BSG fame on the show.  Either way, it was weak.

You'd think Kennex and the writers would be more sensitive to Dorian's plight because he essentially killed himself by exhausting his charge to save Kennex's life.  Do the writers not realize this or are they deliberately taking a step back from Dorian's exploration of humanity by making him just a rechargeable toy?  If it's the latter then shame on them. 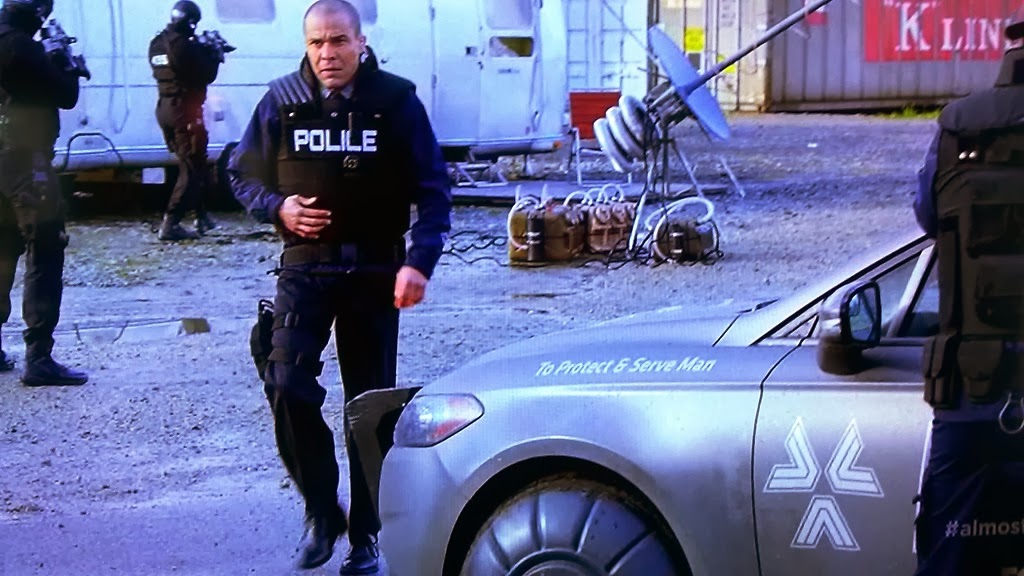 Maybe the writers are really "anti-robot' if you look at the patrol car above it is clearly stenciled, "To Protect & Serve Man."  This obviously excludes all other "life" forms and the message is obvious that anyone else, like Dorian and his ilk, are not worthy of the same consideration.

It could be the writers are winking at us.  "To Serve Man" was the title to one of the great Twilight Zone episodes from 1962 in which the exalted Mankind was not a race to be catered to but to be catered as.  To Serve Man was not a tome to hospitality between races but a cookbook for a superior race instead!  Hopefully, the writers are aware of this and are portraying the future of humans as an arrogant prejudiced bunch that has deep problems with inclusion.

By now you probably aware of my confusion over the writers intentions.  Here's part of the voice over we get as the show begins each episode, "Now all cops, human and man made, together take on the battle to watch over us all."  I hate to burst their bubble but humans are literally "man made" also.

See what I mean about this show?  Are they taking their subject material seriously or is it beyond the ken of this particular crew and it is time to clean house.  JJ Abrams and Joel Wyman have a long history into the exploration of humanity.  Maybe they should step down from their clock tower (as seen in this episode and mirrored from another real life tragedy) and make sure their writing team is on board with the real reason for this show.

At least I hope exploring humanity is the real reason for this show.