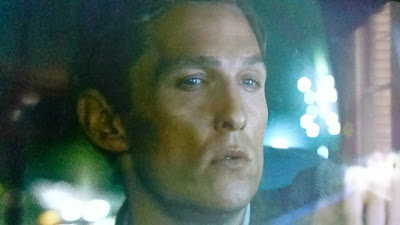 I think most requests would be for "Hard boiled".  That would seem to characterize Matthew McConaughey's take on Detective Cohle in HBO's "True Detective."  Maybe over-cooked or half baked would be more appropriate for Cohle.

McConaughey has become quite the chameleon of late.  His drastic weight loss for "Dallas Buyers Club" has seemed to follow him everywhere.  He's a long way away from the stripper "Dallas" in "Magic Mike" and he looked a lot healthier in "Mud" also.  If you've seen "The Wolf of Wall Street" you can see his gaunt appearance there too. 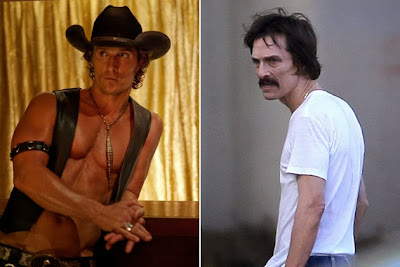 More striking than his physique has been his acting capabilities.  He's been fantastic and no more so than in True Detective.

"Hard boiled" would be a more appropriate description of Russell Crowe's detective in "L.A. Confidential."  Tough, gritty, ready to do the dirty work but with a sense of morality spiced into the recipe.  McConaughey's Rust Cohle has none of that flavor cooked in except maybe the bad parts.

To say "cooked" for Detective Cohle is quite apt.  This guy is thoroughly over baked.  He's prone to hallucinations over his dead daughter, teeters on the brink of substance abuse and harbors a fatalistic philosophy over the evolution of mankind.

In one of the more entertaining cuts from the first episode, Cohle expounds upon his philosophy of mankind and how people have evolved too far.  Not just too far but over-evolved to our mutual detriment.  It was both spooky and fascinating to listen to Cohle and at one point Woody Harrelson's Detective, Martin Hart,  had to tell him to shut the F up and he never wanted to hear that nonsense again.

The look on Harrelson's face as Cohle prattled on with dark vision of humanity was priceless.  More valuable than that was McConaughey's delivery.  It was chilling in the best/worst sort of way.  You learned more about Cohle in that brief encounter than you can stand but there is much more to come.  Much more. 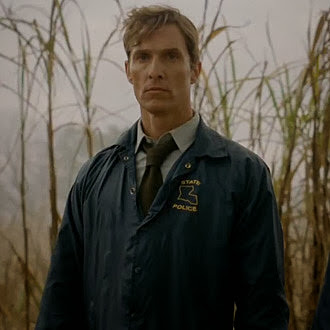 McConaughey's character of "Rust Cohle" is suitably named.  The "rust" that has taken over this man's life has nearly emotionally paralyzed him.  If it wasn't for his keen analytical intellect he may well be and emotional paraplegic.  You could see glimpses of Sherlock Holmes in him not to mention the Christian Bale Batman.  Both characters were or became emotionally distant to the point of being asocial.

The surname of "Cohle" is also suggestive of a fossilized lump of carbon that now sits as his heart.  Not that it isn't reachable. During the dinner scene, Michelle Monaghan's "Maggie Hart" makes some simple inquiries that uncovers more background than Detective Hart could uncover in three months of partnership.  It's worthy to note Maggie and Martin are named "Hart" as if to accentuate the counterpoint between them and Cohle.  At least they have a heart and a mutual one at that.  It comprises the state of their family.  Something Cohle is without in both senses.

True Detective makes good use of atmospherics also and the dimly lit and bluer scenes are left to Detective Cohle.  It leaves the show with an overall sense of despair.  That's a given in keeping with it's grisly subject matter.  Music is important too.  As the credits roll at the end "Young Men Dead" by The Black Angels, tolls on, ringing in a macabre sense of dread.  Episode 2, season 1 of Fringe, "The Same Old Story" used the same song.

I remember how atmosphericly it lent itself to Fringe and how sympathetic and saddened I felt for Olivia Dunaham.  It was only the beginning.

At least Olivia wasn't nearly as far from redemption as Rust Cohle seems to be.  By the end of the episode and interspersed within, we see the present day Rust Cohle.  A decayed husk of a man still sharp but swallowed up by the demons that have persued him. 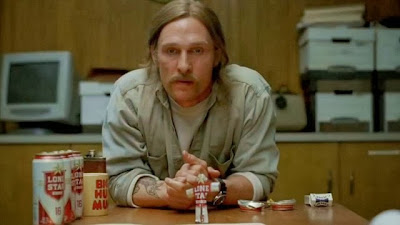 True Detective is a fascinating look into the criminal mind.  Cleverly, we see it on the other side of the razor's edge as embodied by Cohle.  There for but the grace of God go many a policeman.  How better than to defeat your foe than to possess some of the qualities your nefarious opponent does?  The trick is not to let it infect your better angels.  It seems clear McConaughey's Cohle has lost that battle.

This is what is so intriguing about McConaughey's portrayal.  He's got a firm grip on what drives other men mad and as he stares a thousand yards into the distance you can feel the icy indifference in your bones.