Orphan Black - The Stigmata of Progress 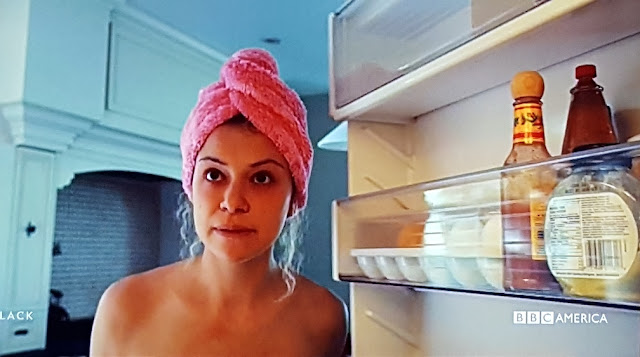 Christ on a crab cake that was awesome.

I don't know how you measure the success of an episode, be it with high humor, low humor or even gross out humor.  Perhaps its by raising the stakes, deepening the mythology or by shattering reveals.

Clone clubbers, this one had it all.

Orphan Black dove right into the characters, questions and conspiracies with, "The Stigmata of Progress" and by the end we were left with a bruised funny bone, a deepening heartache and dizzying new alliances. 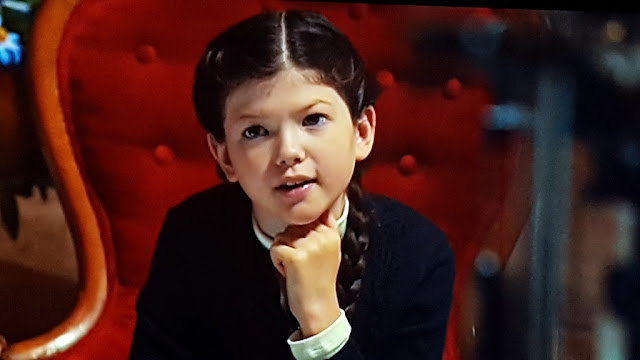 I'm anxious to discuss my new conspiracy theory but we may as well start right at the beginning since it starts with Charlotte and Rachel anyway.

We don't get to see young Charlotte very often and when she popped up I thought to myself, "Oh wow, good, let's see where this goes."  Her appearance was nearly trumped by a Castor clone that goes by the name of Ira. 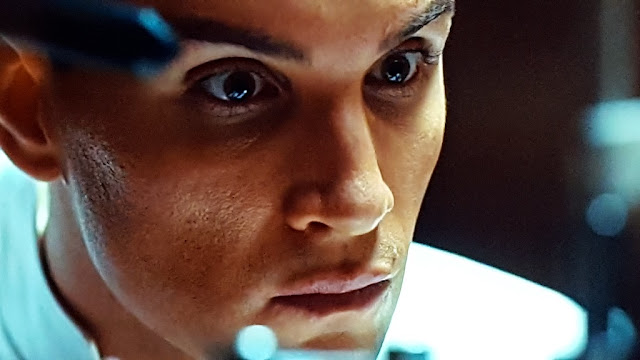 I had been wondering how they were going to weave in the Castor side of things and I have been wary of this side of the mythology.  Castor seemed to be just another rabbit hole but now I have a feeling they are going to streamline this part of the narrative.  Perhaps no more widening government conspiracy with darkening military aspect.

Naturally, Rachel had to get in a few digs at the new boy clone.  She tangentially questioned his masculinity and I thought he might be some sort of eunuch the way she tossed her jibes at him.

He deftly turned them aside by asserting he's never been in contact with his more martial brethren.  In addition to that he didn't display the quick temper of some of his siblings had so perhaps the Neos managed to inhibit his "defects" by truncating the aforementioned "masculinity."  (If you get what I mean.) 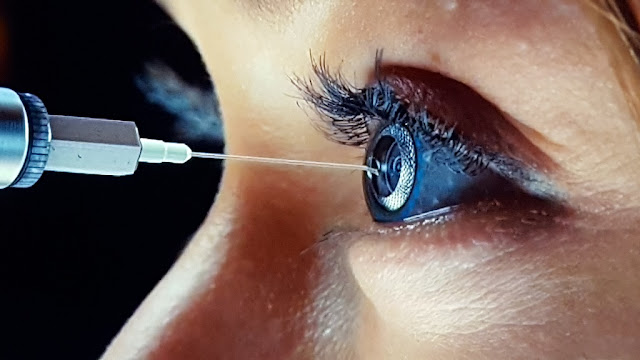 You'd think Rachel would be a little more kind to one of her keepers since he's responsible for her care.  But I guess living like a prisoner would put anyone on edge.  Especially Rachel whose bitch dial is always turned up to maximum shrew.

So, this opening sequence was pretty revealing in that it caught us up with Rachel and her progress, reintroduced the Castor clan in a smaller scale and brought Charlotte back into the story. 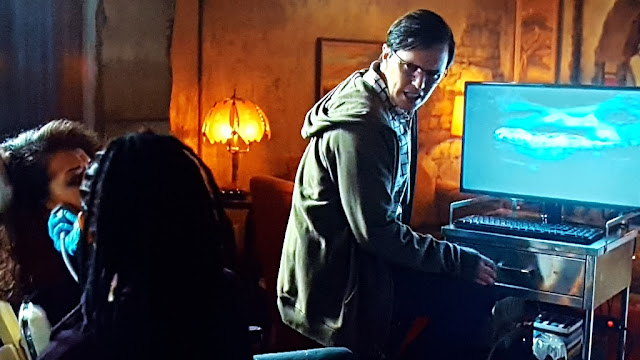 Un-pause Dave because we have more answers!

Scott and Cosima managed to discern the nature of the "Maggot-bot" inserted near Sarah's jawline.  It turns out it is not entirely organic and there is a auxiliary inorganic component to it.  I had wondered in my last post if it was entirely organic in nature and perhaps operated with a bird like instinct for direction.

Scott then asserted the worm was "not a tracker primarily" which maybe explains why it took so long for the Neos to find Sarah in her Icelandic hideaway.  (Answers baby!)

I like it when a show doesn't drag out all of the mystery.  Those questions I had to the nature of the Maggot-bot were answered quickly which allows us to move on to the deepening mystery.  (Read that last post here.)

So far we've been presented with a dizzying amount of questions and answers. 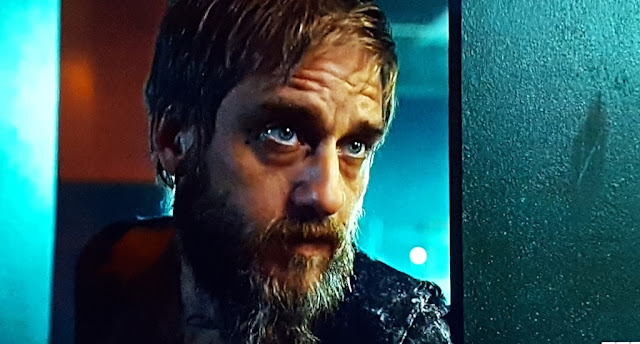 Sarah managed to hunt down Dizzy whom she met in the Neo night club (she had his phone.)  Dizzy brought us more insight into the nature of the Maggot-bot by offering Sarah his own theory into why the worm is located where it is.

Proximity to the brain.

Everyone raise your hand if you think Dizzy is right in his guess.

Yup, that's a lot of hands. 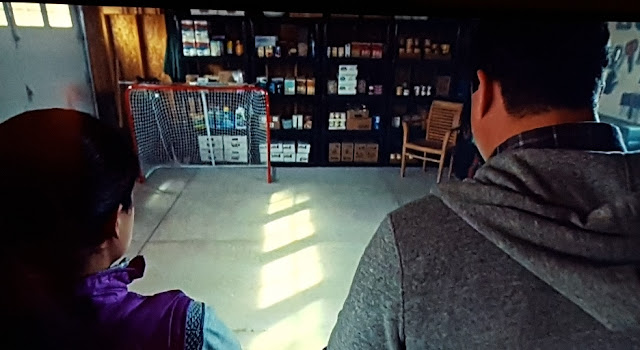 Lest you think it may take several episodes to come up with a solution to Sarah's plight, never fear, Donnie and Ali are here.

This is where the high and low's of comedy come to the fore like hot garbage juice through a dumpster spigot.

I'm not sure if the writers always had the idea of an implant in Leekie's head but the solution to everyone's problem lying beneath the garage floor was either  retcon genius or purely inspirational.

Time for a heartbreak, um, break. 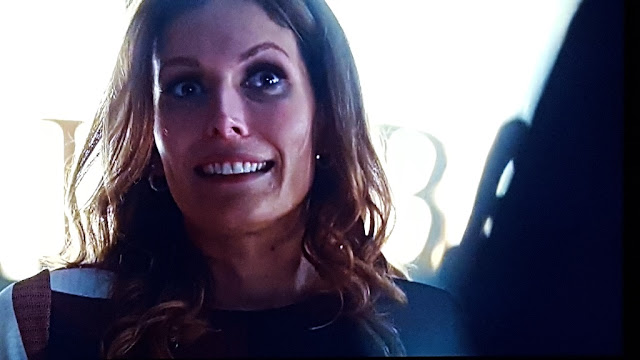 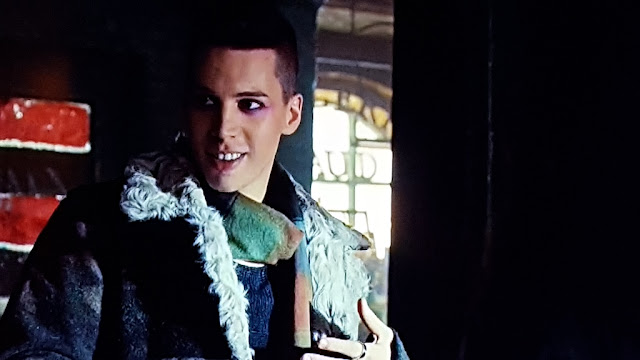 There's nothing particularly heartbreaking about the introduction of Fee's "true" sister Adele.  Unless you consider her enabling Fee's drinking.  She's quite the swiller isn't she?

No, the real heartbreak is the widening divide between Sarah and Felix.  Felix declares he's not going to drop everything just because Sarah's "short a sidekick"  (Ouch, that stung) and Sarah rightly labeled Adele a possible Neo plant.  Telling Fee to "piss off" didn't help matters.

How are they going to fix these two?  Have Adele "sing" like a bird?  (Which would make her a rat.  Just sayin'.)

Okay, back to the plot. 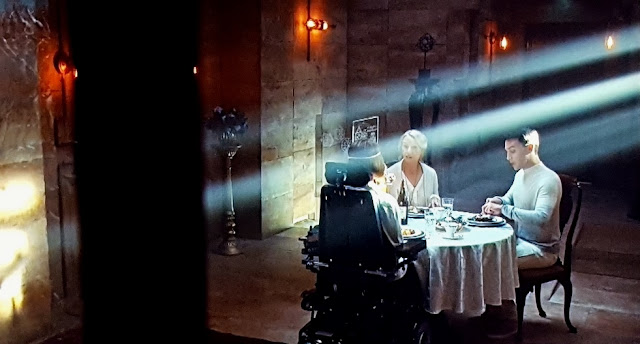 Rachel doesn't garner much sympathy but there is a certain amount of heartbreak to her plight also.

After Rachel's rehabilitation workout with the preternaturally therapist, Ira, Susan Duncan enters the scene.  This flawed family has a little sit down of a dinner and the answers were served like a five course meal.  (A cold Klingon type of meal.)

First, Rachel tried to play the Alpha dog she used to be and slapped Susan with the assertion Duncan had failed to catch up with Sarah.  And how Susan was outfoxed once again.  "You failed to cure us."

How does Susan return the favor? 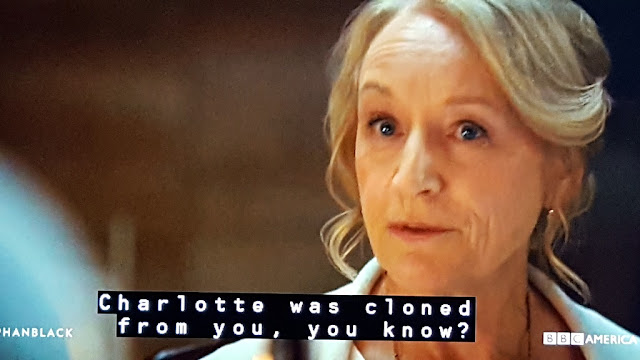 Bam, that answers that question.

Many of us had wondered where Charlotte had come from.  I for one was hoping she had been a mysterious offspring of Sarah's.  Especially after the two were introduced they way they were when we first met Charlotte.

Now we know for sure Charlotte comes from Rachel.  (Yes, there was a clue Charlotte and Rachel were directly related when actress Cynthia Galant portrayed the young Rachel in the Duncan family films.  But this closes that door.)

Susan manged to add the stinger that Charlotte had taken 400 tries to create.

So don't call her a bad mom, she's really trying you know!

Man, that was a lot.  The poignancy of which was made more bitter when we the viewing audience shared it with Rachel and took in the nature of Charlotte's handicap.

Maybe we should take a Kira Break.

Heh, this isn't much of a break when you consider the portentous info dump we got from the little darling.  (Or "Chicken" as S would call her.)

Kira was a bit spaced out to start the episode when she confessed to the "Hell Wizard" she knows when they are trying to keep things from her.  Things got a little more scary when Cosima snapped Kira out of her trance and Kira told her they had "set mommy on fire" because, "she was changing."

There isn't much that startles Cosima, she's seen a lot, but that set her back.  It was all she could do to pacify Kira and tell her, "You know we would never do that."

Wouldn't they?  The whole "fire" vision upped the volatility of maggot-bot situation especially considering what happened to Alonzo Martinez.  The stakes were raised considerably here.

Maybe we could use a comedy break. 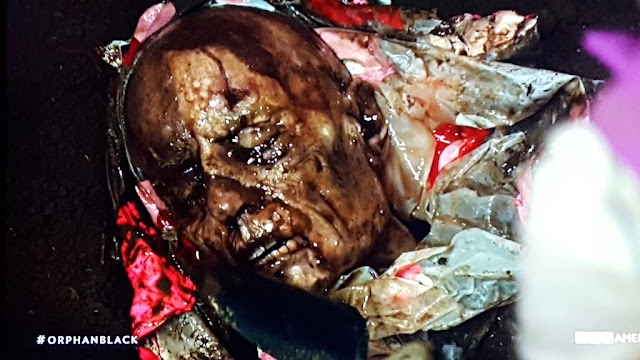 Seeing what's become of Mr. Garbage Goo himself, Aldous Leekie, was pretty funny right?  Well, I giggled a little.  (I even checked if Matt Frewer got a credit. Nope. Too bad.)  The funny parts came from Donnie and Ali.  Their constant retching and comedic pattering to each other was hysterical.  Add to it the comic trappings of Helena and Donnie trying to get on as a family in front of the two detective was hilarious. 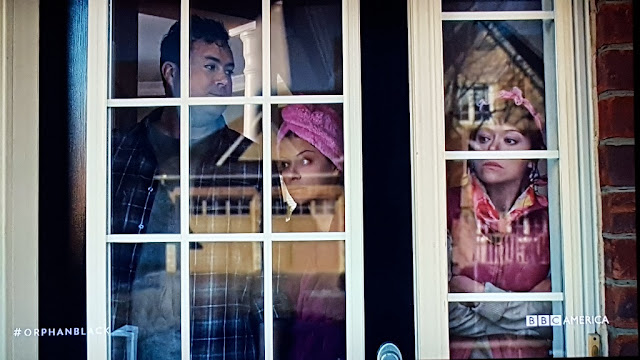 Move over Marx Brothers.  Step aside Stooges.  There's a new team in town.
Please keep this comedy trio together they are pure gold.  (Pure Emmy gold.)

The good times can only last so long. 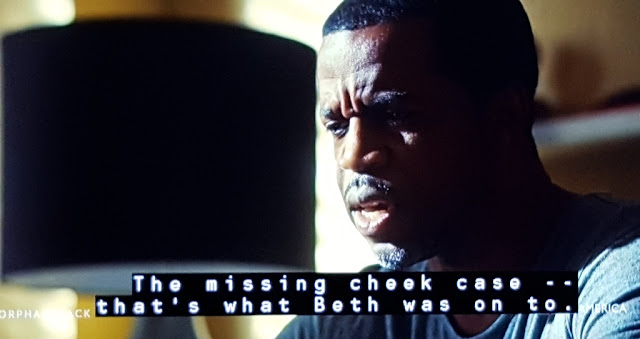 Art is on to something and he provides more answers into Beth's investigation.  He then puts Sarah on to a dental clinic that specializes in implants (of course it does.) 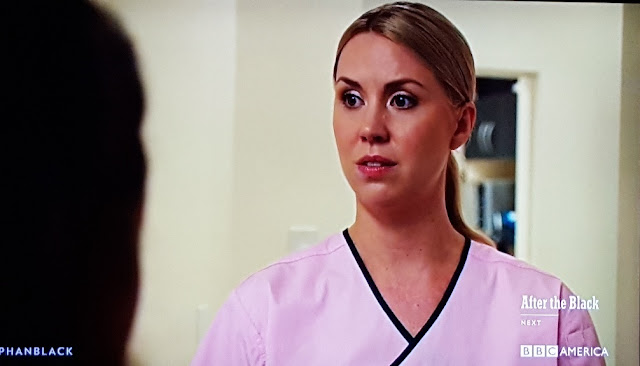 At first, this seems to provide an answer to Sarah's predicament in that an aide can actually extract the Maggot-bot from her face.  Only the aide is in on the conspiracy and thinks "Beth" has been bestowed with some honor with the implant in the first place! 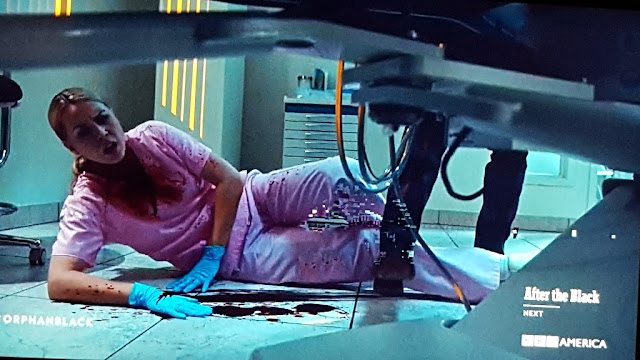 Enter Ferdinand.  He "rescues" Sarah and drops the bomb on her that Susan Duncan is alive. 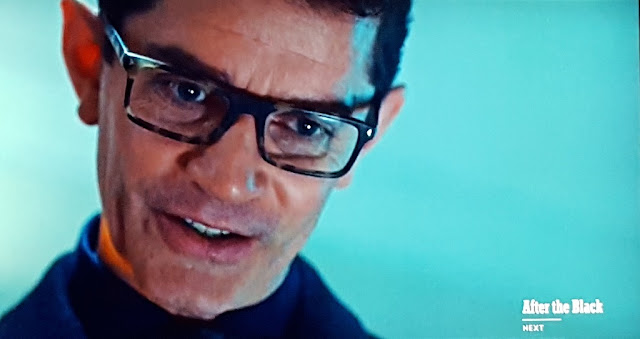 We go back to when Rachel and Charlotte were doing their painting together in the "terrarium."  Rachel paints if her "message" has gotten out?  Charlotte affirms a painted yes.  Mrs. S was expecting to meet Benjamin in the park and Ferdinand makes his stunning entrance.  Ferdinand makes S a deal she can't refuse and we find him at the clinic.

Woof, hang in there with me.

So our new conspiracy of strange bedfellows is Rachel still working with Ferdinand.  Ferdinand, with his Dyad and Helsinki baggage, offering to work with S and S apparently assenting or Ferd wouldn't be at the clinic!

This means Rachel will be working as the "inside man" against the Neolutionists (as I had hoped for last season) until the Clone Club can affect a rescue.

Until she is rescued, she will be funneling information to the Clones.  They in turn will continue to work on a cure that Susan Duncan failed to achieve since she couldn't find the "original."  (We know where she is.)

Man, I said it was strange bedfellows.  Rachel, Ferdinand, Sarah and the Sestra's all working towards the common goal of a cure and getting Rachel out.

Of course we can only trust some of the new Scooby Gang so far.  Their vested interest will only carry them as long as need be.  Plus we'll have to keep an eye on Ira as he seems pretty close to Duncan.  (Nice jab at Rachel about her "pituitary hormone therapy" making her cranky and giving her "facial hair."  Zing!)

They better hurry as poor Charlotte spit up some blood when she coughed on the painting they were working on together.  That should add to the urgency to work with the Clones for Rachel since her "daughter" is rapidly deteriorating. 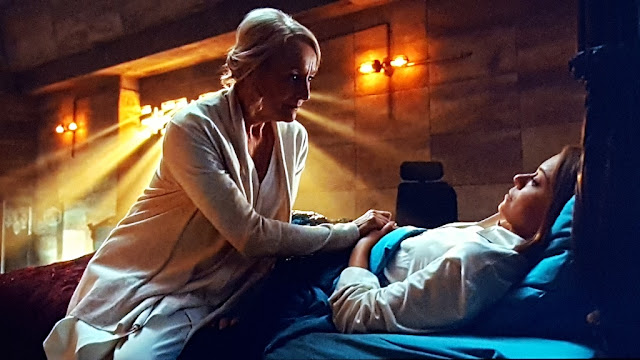 No doubt the Maggot-bot will come into play.  The Neos think they can control human evolution and create a more perfect human being.  I think the Clone Clube will come up with a cure to their collective ailment and it will include the worm as a vessel. 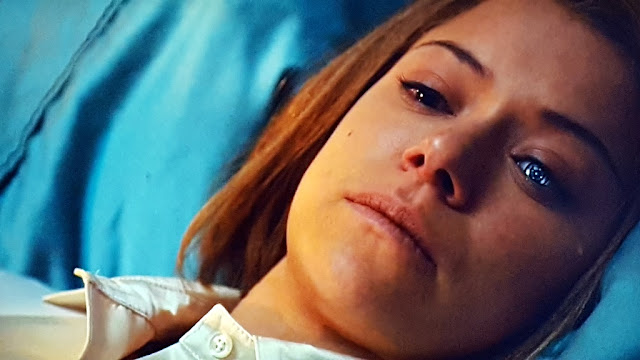 How would you like to be told by your "mother" they are working on a more perfect human being when her imperfect daughter lies before her.  What with her infirmity and her mechanical eye.

No wonder that digital appendage shed a tear.

Welcome to the Clone Clube sister or should I say, Sestra!

Oh sh*t!  I just got what the title means!  Stigmata.  Progress.  The blood on the painting.  Getting closer to a cure.  Awesome! 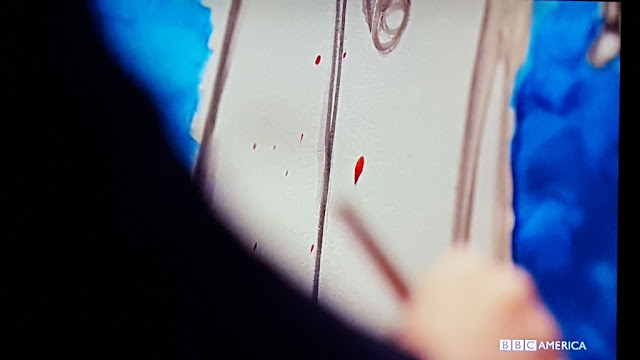