Star Trek Discovery - Despite Yourself 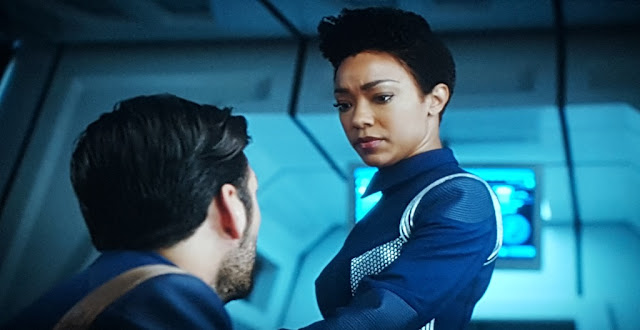 "Despite Yourself"  Such an interesting title.

My mind actually read it as, "to spite yourself."   I'm sure the show's creators chose their title to highlight the internal struggle one deals with when faced with your best intentions.  Especially, when those intentions run counter to your true self.

The most glaring example of which is the revelation behind Ash Tyler.  If you juxtapose this against his seemingly utter devotion to Michael Burnham, then his internal struggle must be enormous.

But, I can't help but feel he is filled with self loathing.  His disgust over his feelings towards L'Rell.  His duty to his secret mission against the Federation.  His love for Burnham.  To me, it feels his every act is to "spite himself" because of this internal struggle.  It's as if he feels he deserves to suffer.

Also, you may argue Tyler's affection towards Burnham is just a part of his "programming".  Possibly, but his "human programming" might be equally as difficult to resist as his Klingon nature and this emotional tug of war may last to the end of season!

Ah yes, about that big reveal.

Many in the Star Trek social media universe have guessed Tyler was the transmogrified Voq.  Voq was the original Klingon ally and love interest to L'Rell from the first two episodes.  Many assumed he was physically and mentally transformed into a human being to be inserted into the Federation as a spy.

While this hasn't been explicitly spelled out, this scenario gets stronger every day.

Especially since Doctor Culber confirmed as much during his examination of Tyler.  As if this news wasn't exciting enough for Discovery fans, what came next was utterly shocking. 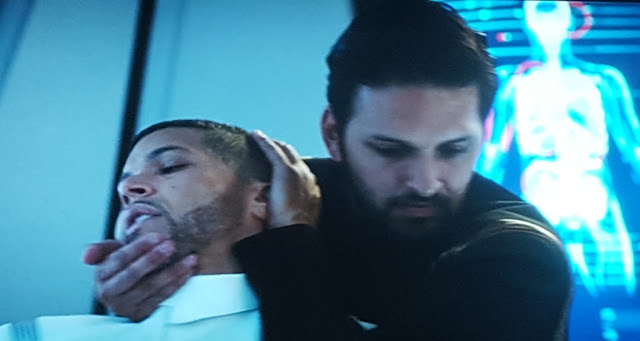 Tyler's programming takes over and he murders Dr. Culber.

I was speechless.  My mind instantly raced to how they were going to fix this.  This being science fiction I assured myself anything was possible.  Now I'm afraid this stunning event is permanent. 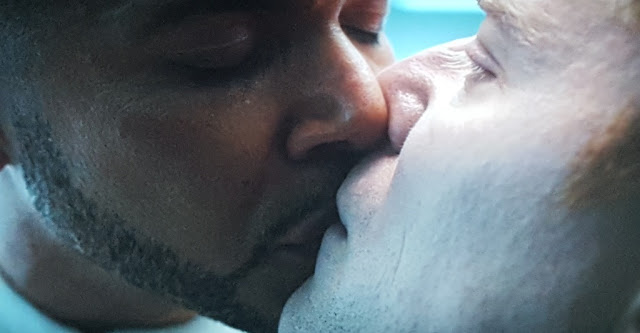 Culber had just shared a tender moment with his partner, Stamets.  A moment that briefly brought Stamets out of his fugue state.  This lucidity cheered Culber and made us think there was hope for Stamets through the love and care of his partner.

However, if you think back, there was a dark foreshadowing to this calamitous event.  Culber had divined Lorca had set up this entire mess during the last Spore jump.  In turn, Lorca accused Culber of being too close to Stamets and ordered another doctor to take his case.  Now, the icy hand of fate has cruelly intervened.  Once again, just when Lorca's machinations are set to be revealed, he is miraculously spared. 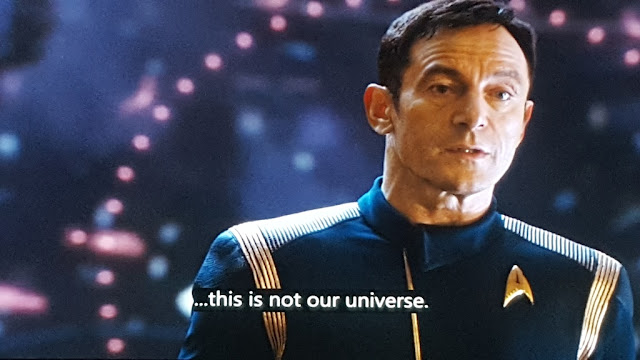 Now would be a good time for the other major reveal of this episode.

Discovery has entered the Mirror Universe.  Yes, that dark antithesis to our own universe first revealed in the original Star Trek series featuring James T. Kirk.

Many had predicted this and even I tried to put my own spin on it.  Many more insisted Lorca is originally from the dark mirror universe and all of his efforts thus far were to get back "home".

It makes sense.  He is a bit of a sadist.  He recruited Burnham even though she was virtually radioactive.  He brought Tyler on-board and he manipulated the Spore drive.  He is either incredibly prescient or extremely lucky.  Or he's seen it all before and everything is going according to plan.

His reveal to the bridge crew was pretty nonchalant.  Everyone else seemed rather shocked.  Not Lorca.  Just another day. 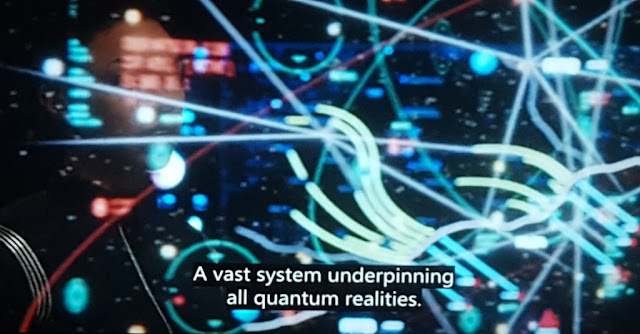 He casually explained away this stunning event by telling Saru and Burnham this was something he and Stamets were going to research later.  Saru remarked it was quite the coincidence and Burnham began to formalize some plans.   But Lorca quickly dismissed their efforts in order to focus on winning the war against the Klingons and getting the de-cloaking tech back to Starfleet. 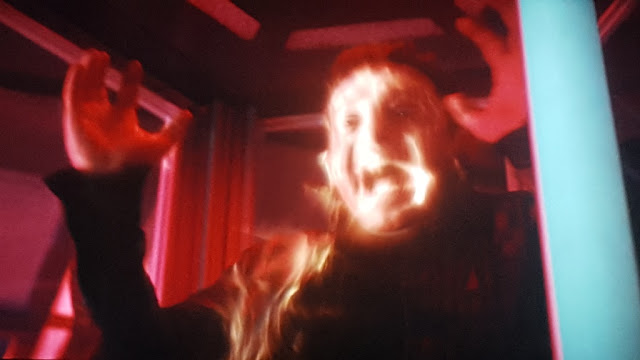 Did Lorca count on being locked up in some painful torture cell?  He may have miscalculated on that one.  Either that, or he is so confident in his plan that a little torture is a small price to pay.

Like Tyler's big reveal, the show hasn't explicitly spelled out Lorca's true motivations but those who were thinking this was part of his plan are looking good today.

I may have not been exactly on the nose with my predictions for Discovery's return.  But this is one thing I got dead right.

Tilly sitting in the Captains chair!

This is something I've been harping on for several posts.  How great was it to see Tilly take on the mantle of the Captain.  Much to the consternation of Lorca too.  By the way, that consternation from Lorca seemed so real.  If he is truly from the mirror universe he would know that Tilly's doppelganger is one of the most feared captains of the Terran Empire.  Yet, he seem surprised.

"The Witch of Wurna Minor"! 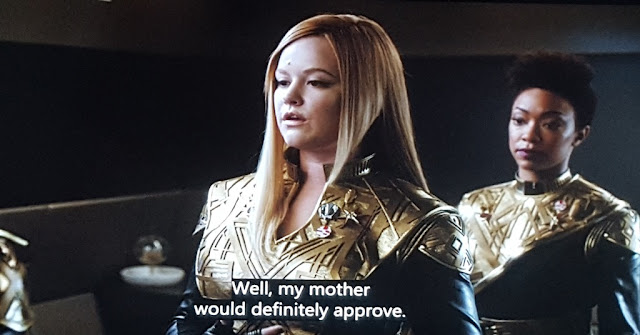 Whether it was lamenting her mother's dashed hopes for her little girl. 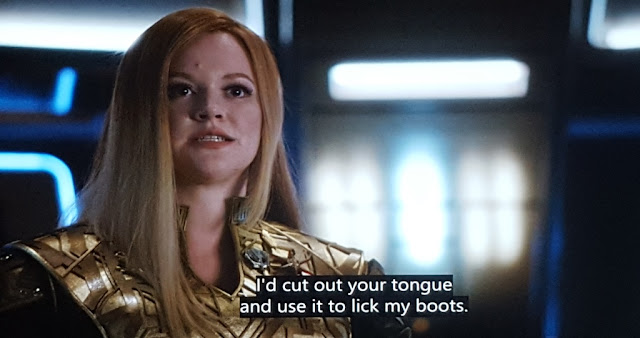 Or delivering this gem to her counterpart aboard the Shenzhou. 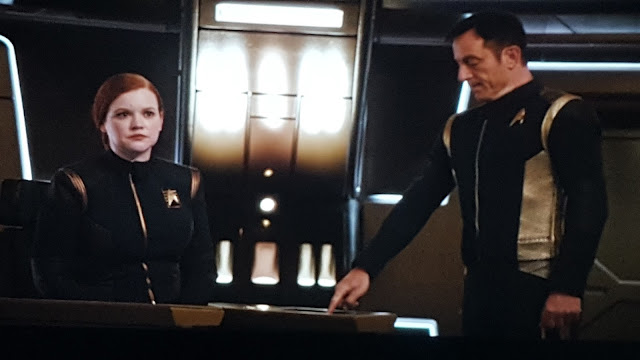 It was great to see my dreams of Tilly in the Captains chair come to fruition.  Let's hope we get to see it again. 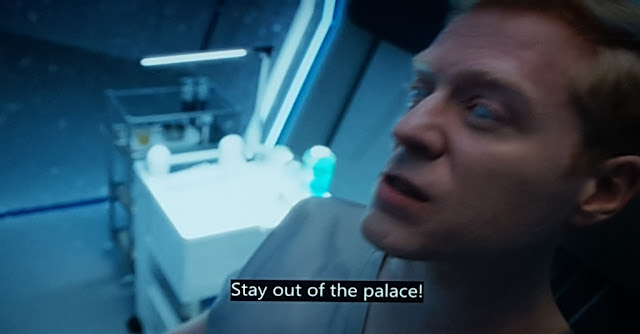 Like any good TV show, Star Trek Discovery asks as many questions as it answers.

While we got some very intriguing clues around the status of Tyler and Lorca we also got some new mysteries to digest.

Such as, what is "The Palace"?  In his fugue state, Stamets warns aloud that is is some place best left alone.  My first thoughts were of the "Mind Palace" that the "Sherlock" series explored with Benedict Cumberbatch.  A mind palace is basically a memory technique wherein you can store ideas in a complex mental structure to be retrieved at a later time.

Since Stamets is mentally "Somewhere else" then I thought he must be warning everyone to stay as far away as possible from the condition he finds himself in.  Which should also include interfacing with the Spore drive.

But, since this is science fiction, then "The Palace" may refer to an intersection of alternate states, timelines and universes that all exist together in one location.  Accessed through the Spore drive it is a place better left alone lest you damage any number of timelines including your own. 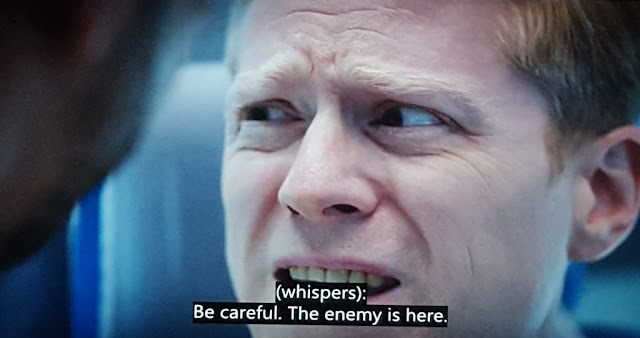 While briefly in his lucid state, Stamets refers to "The enemy".

So who is the enemy?

The logical answer would be the wolf is sheep's clothing Ash Tyler. 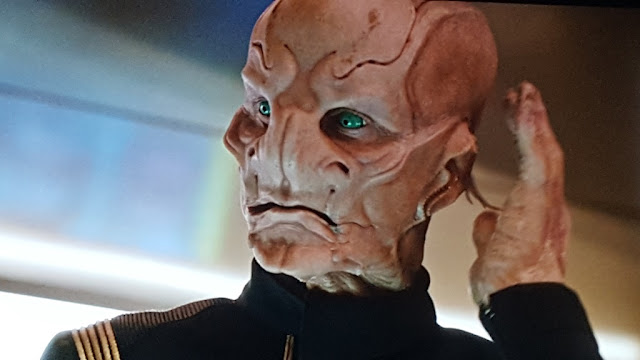 To partly confirm this, Saru had one of his ganglia attacks when Tyler entered the bridge.  It could be the "enemy" is the close proximity of the "Terran Empire" baddies.  But the obvious answer to this question is Tyler.


Who is the Emperor? 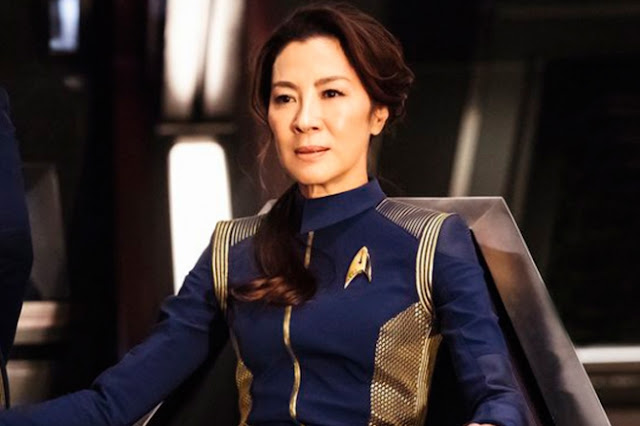 Apparently, Evil Lorca tried to kill the Emperor and usurp his power unsuccessfully.  The Emperor is a faceless entity which means I'm dying to see who he or she is from the original universe.

Someone guessed it would be Saru on Facebook.  But I would think since the Terran empire is so xenophobic and seemingly at war with all alien races, then it should be a human face that we are all familiar with.

Some bizarre manifestation of Stamets that exists across time and space?

Admiral Cornwell in an almighty state ready to erase any mention of Lorca?  (Or any male that crosses her!)

Captain Georgiou?  Did they say she was dead? I'd love to see her rule with an iron fist.

Sarek?  I hope not.  As mentioned, the Terran Empire is pretty xenophobic.  He may lead the Resistance.

The Emperor may well remain faceless but I hope we do get an answer. 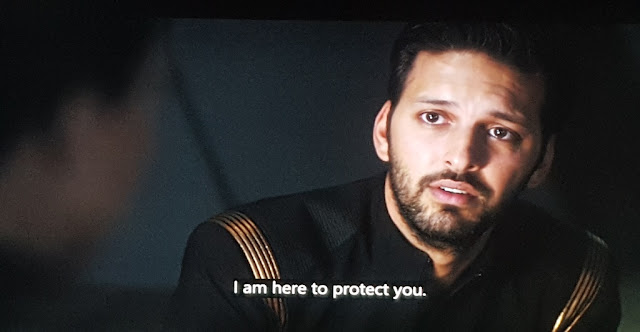 Really Ash, from what?

Her precarious position in the Terran Empire?  Or something more nefarious?

It could be Lorca rescued Tyler and was played for the fool by the Klingons.  Or, it could be Lorca knows exactly who Tyler is and he is using him to protect Burnham until Lorca's grand scheme comes to fruition.  Whether that's his return to the Terran Empire and sitting on the throne or something equally evil or wonderfully mysterious.  I hope we get an answer to this. 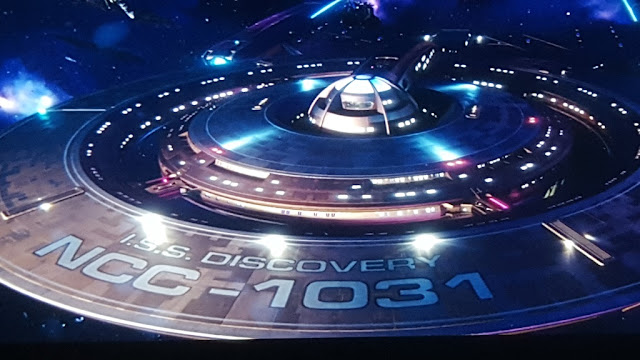 Don't you wonder what the evil Disco is up to?

Shooting everything at sight?  Starting a war with the Vulcans?  Aiding their purity rebellion?  I hope Admiral Cornwell didn't try to beam aboard.   It might be too much story to cover but we should get a brief look. 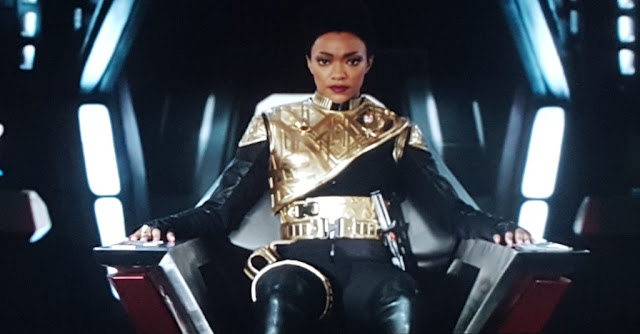 I know everyone wasn't happy to see the Mirror Universe come back.  Too pat of a plot device.  But I thought Discovery handled it well and it was an intriguing hour of television.  And yes, fun.  It looks like we'll be here for a while so be ready for the long haul. 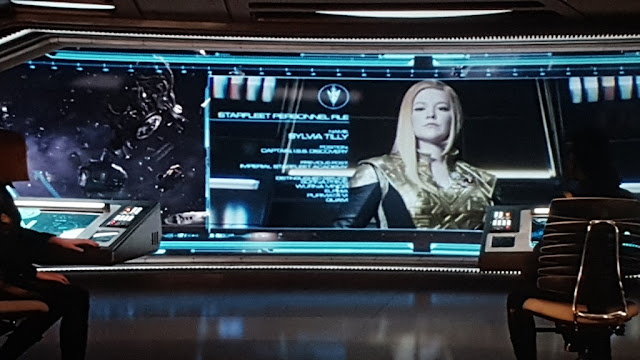