Helix - In a White Room With Black Curtains

Is there any doubt that that in the "White Room" that is the world of Helix, they are not afraid of going to the darkest places?

Here's some of the lyrics to Cream's "White Room".

"In the white room with black curtains near the station.
Blackroof country, no gold pavements, tired starlings.
Silver horses ran down moonbeams in your dark eyes.
Dawnlight smiles on you leaving, my contentment.

The lyrics to White Room were from a poem written by Pete Brown and adapted to music by bassist Jack Bruce back in 1968.  They are oddly prescient to the place where Helix finds itself now.  The "Black Curtains" evince the funereal feeling that now hangs over Helix.  The "Dark Eyes" belong to the morphine addled Sarah.  "The Sun Never Shines" in this arctic Hell and "Wait[ing] In This Place Where the Shadows Run From Themselves" evinces thoughts of virus plagued zombie vectors bouncing off the walls if not the "shadows" that lurk in the heart of every man and woman that is trapped there.

I guess I should have known we were headed for a dark place when I heard the monkeys screech when Sergio set them to flame  Does that mean the monkeys were held in a frozen stasis until revived by the flames?  Let's keep that thought in our back pocket till later. 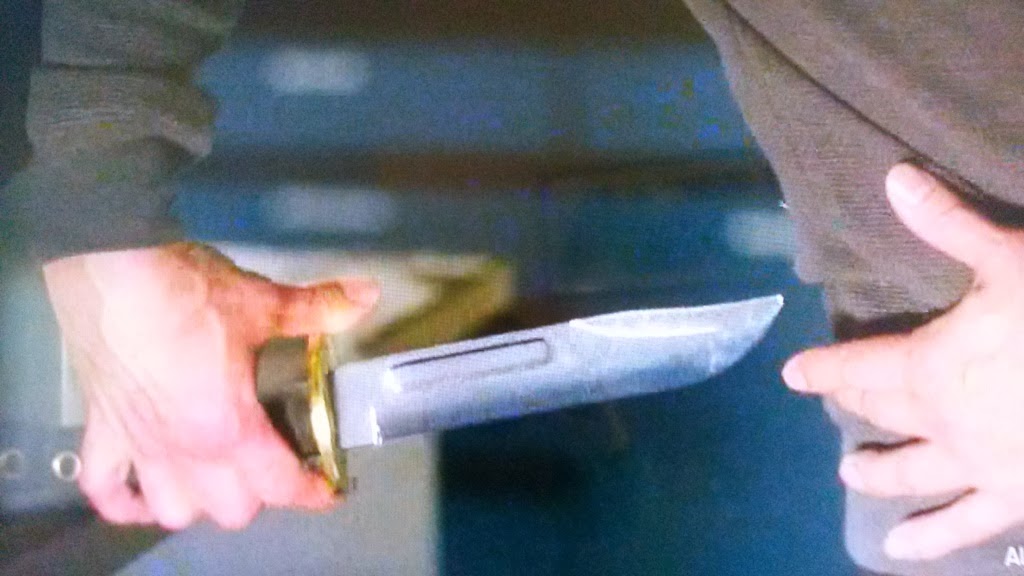 "Oh happy dagger!  This is thy sheath; there rust and let me die!" 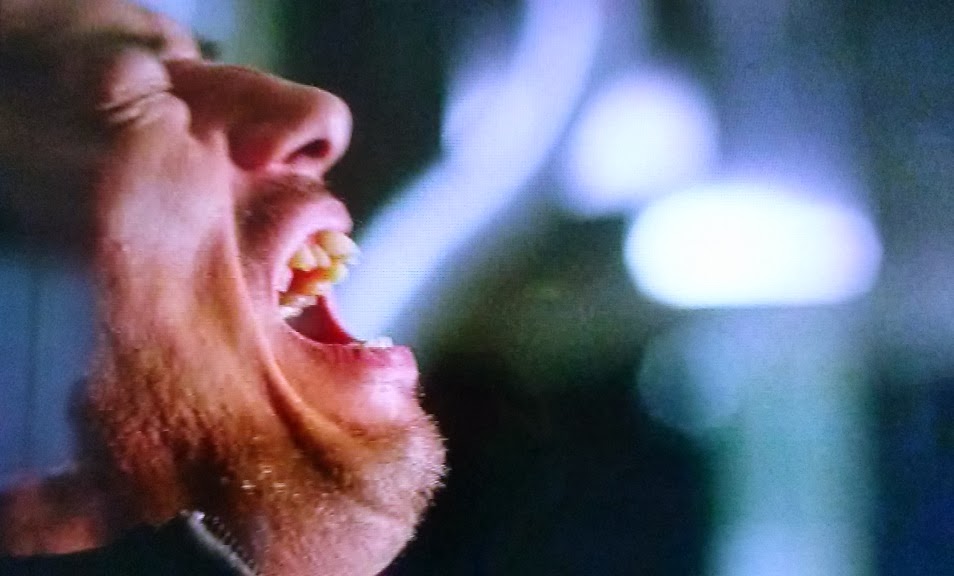 Increasingly, Hatake has taken on the form of some tragic Shakespearean figure.  Juliet?  Hmm, probably not.  Perhaps closer to Hamlet, Lear or better yet, Prospero of "The Tempest" fame.  Yet, Hatake does invoke some weird romantic vibe reminiscent of Romeo and Juliet especially when he talks to Julia.  Oh, I get it, Juliet, Julia, now it makes sense.

If Hatake were to be a Lear like figure looking to bestow his kingdom to his daughter then that would make more sense.  Especially in light of the childlike scrawl Julia discovered in the previous episode added to the fact that Hatake tells Julia of his own daughter's death and how Julia reminds him of her.

Was Julia truly a child when she left that scrawl and Hatake began to treat her like the daughter he lost?  At one point when Jaye was (get it, Jaye as in "J" for Julia) revealed to be a hallucination I thought the scrawl was a hallucination also but now I think not. 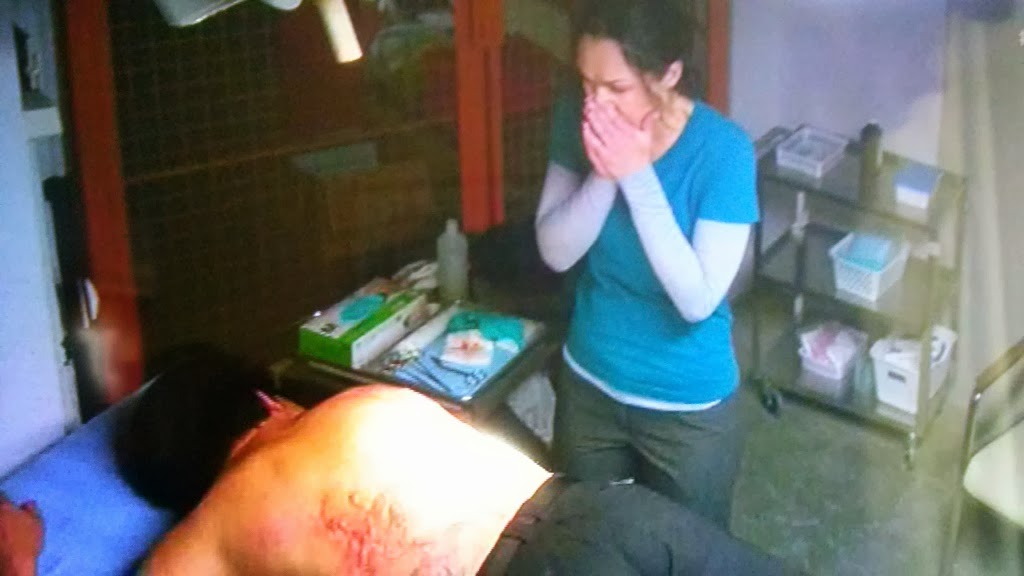 Julia remarks to Jaye she "would have remembered those vacations to the Arctic Circle as a child."  But since we now know Jaye is a figment of Julia's imagination, Julia may not be consciously aware of her visits of long ago.  Or not long ago.  Hatake doesn't seem that old to be a father figure to Julia.  I'm thinking Julia was reduced to a child like state when she was held there by Hatake.

I'm conflicted over this theory so I will have to wait until we get some Hatkae/Julia flashbacks, if we get any at all. 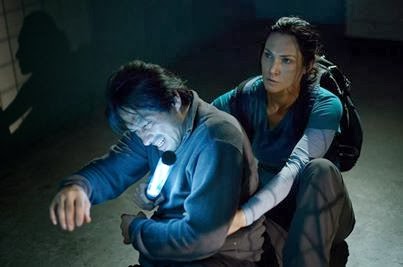 Hatake did manage to maneuver himself into meeting up with Julia.  He played upon her sympathies by wounding himself and gave himself a convenient alibi as to why he was down there and what happened to the "three wise men" he shot in the episode before.

My obsession with the Hatake/Julia dynamic is beginning to mirror the obsession Hatkae has with Julia and I am dying to know what her role is here.  But let's get back to the other amazing and darker revelations from this past episode. 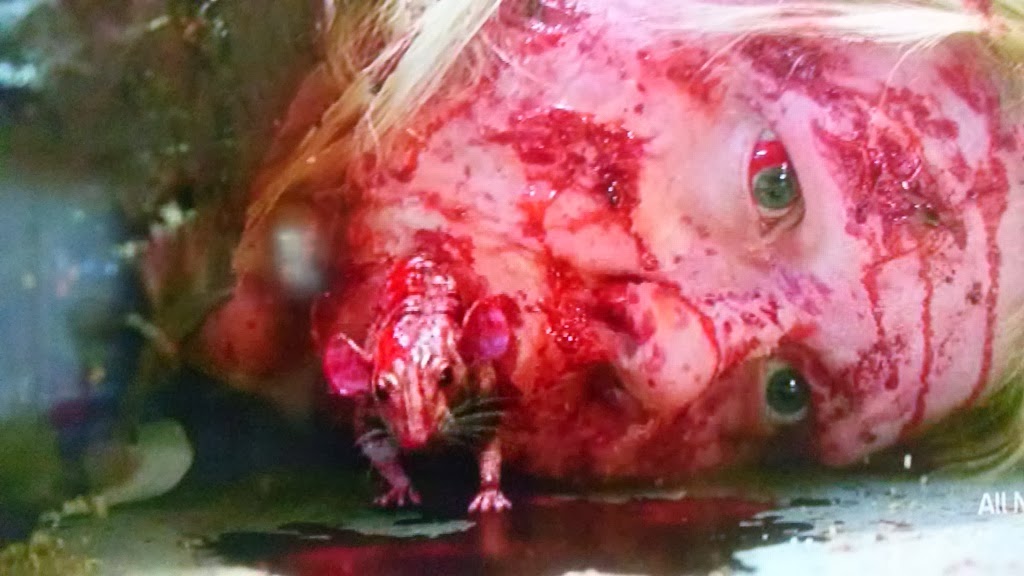 Sorry, I had to include this image.  Poor Doreen.  In interviews, Cat Lemieux did say she wanted her face shown in this episode after all the makeup work she had done.  Is this what she meant?

At least the secret is out about her death and Sergio has been outed as the killer.

And speaking of secrets, look at what's in the white room! 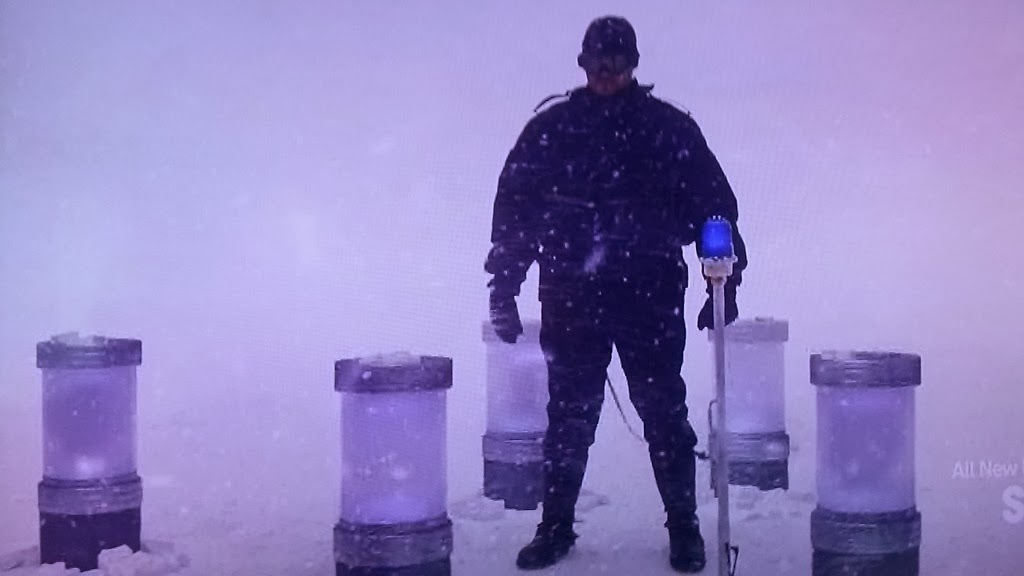 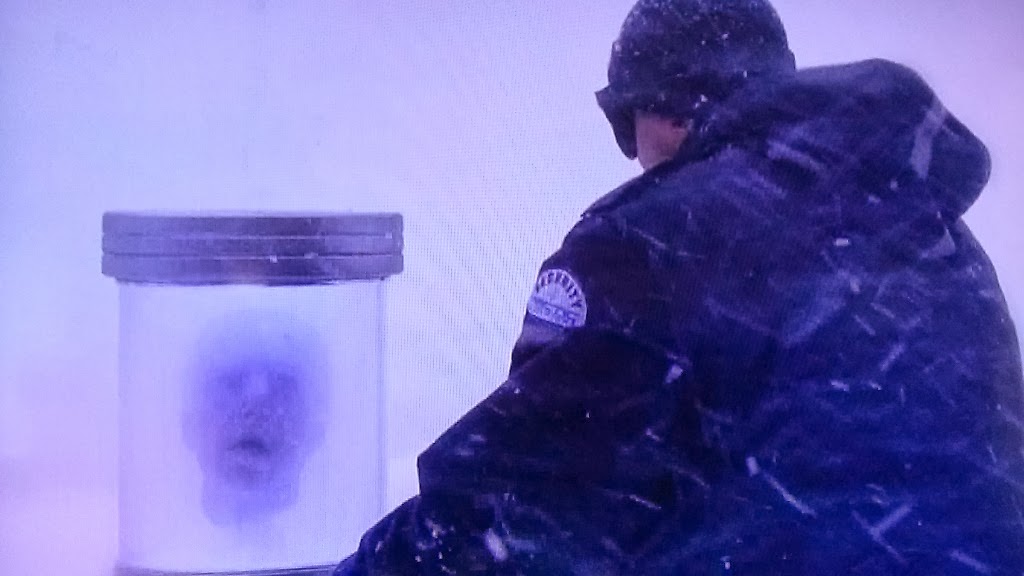 And lo and behold we get "Dr, Hvit."  Is HVIT an acronym for something? 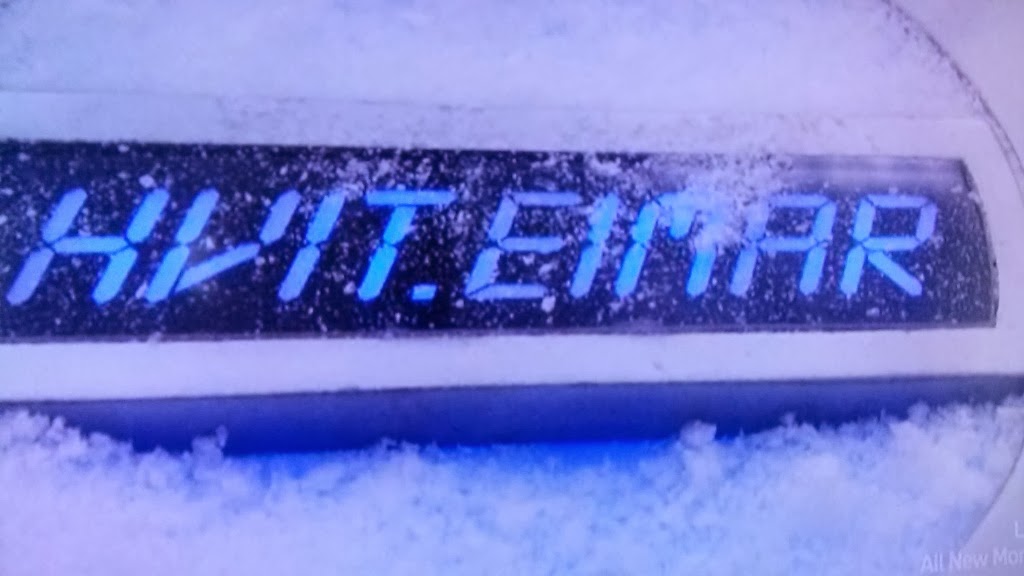 I'm not sure what "HVIT.EIMAR" is supposed to mean if anything.  At one point I thought the HV of HVIT stood for, "Human Vector" but I haven't worked out the rest of it.  But this does harken back to our frozen monkey scene from the beginning.  When thawed they came alive and screeched aloud.  Is that why the good Doctor's head is being kept out in the frozen badlands?   Was he infected, decapitated, and then instantly frozen only to be thawed and resuscitated for later use? 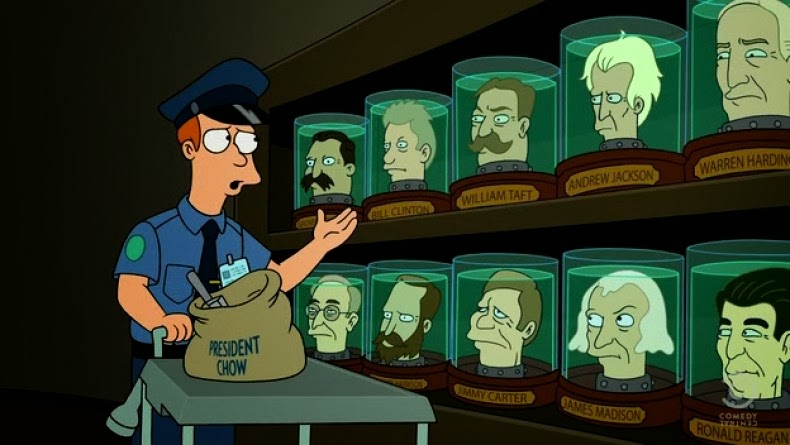 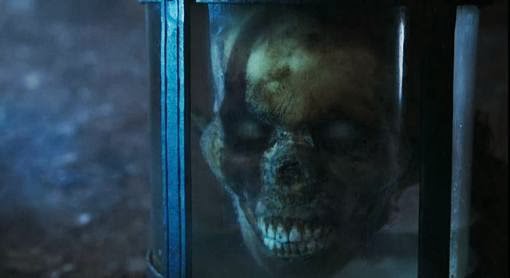 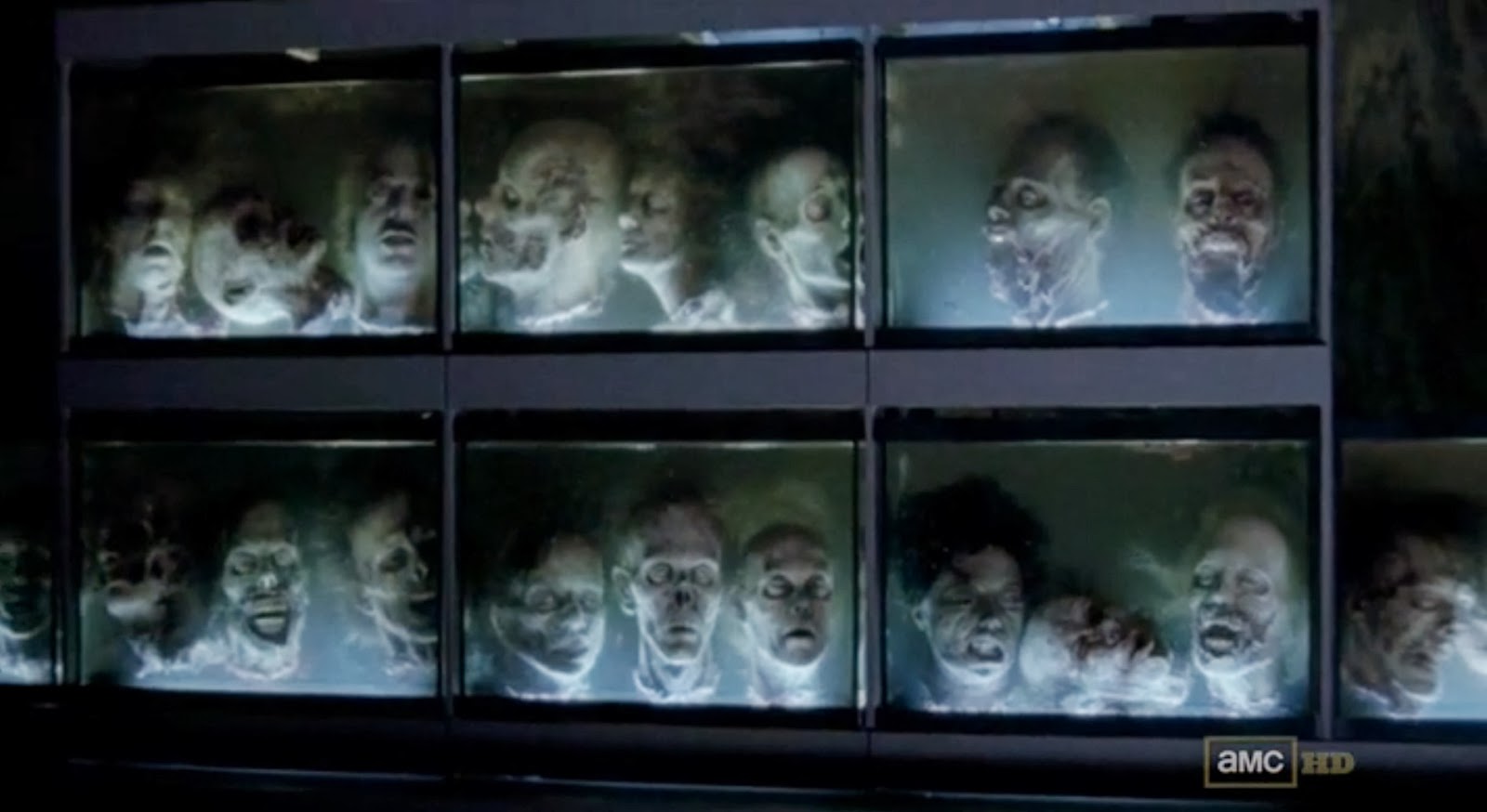 TV has made great use of decapitated heads recently.  From Futurama to Sleepy Hollow and the Walking Dead.   All kept in stasis and ready for later use.  Awesome. 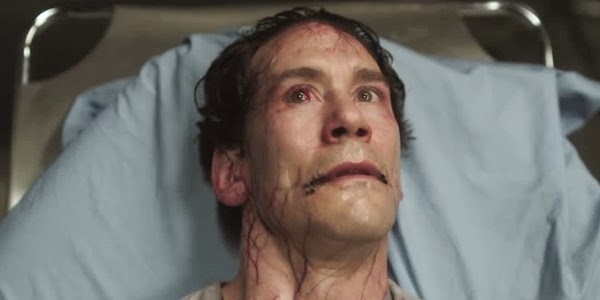 Speaking of being held in "stasis".  Peter seems to be coming out of his stasis like coma state.  Good thing he has kept his head.  But this is in keeping with the thematic line of resurrection.  Should we make the connection between "Dr. Hvic" and Peter "coming out of it" and or "resurrected?"

Once Hatake makes it back I can see him being reunited with Dr. Hvic (Human Vector Infected Component?) and Hatake will hook up the tubes and electrodes which will resuscitate Hvic.

The eyes will open, he'll look around, his mouth will move and he'll say......