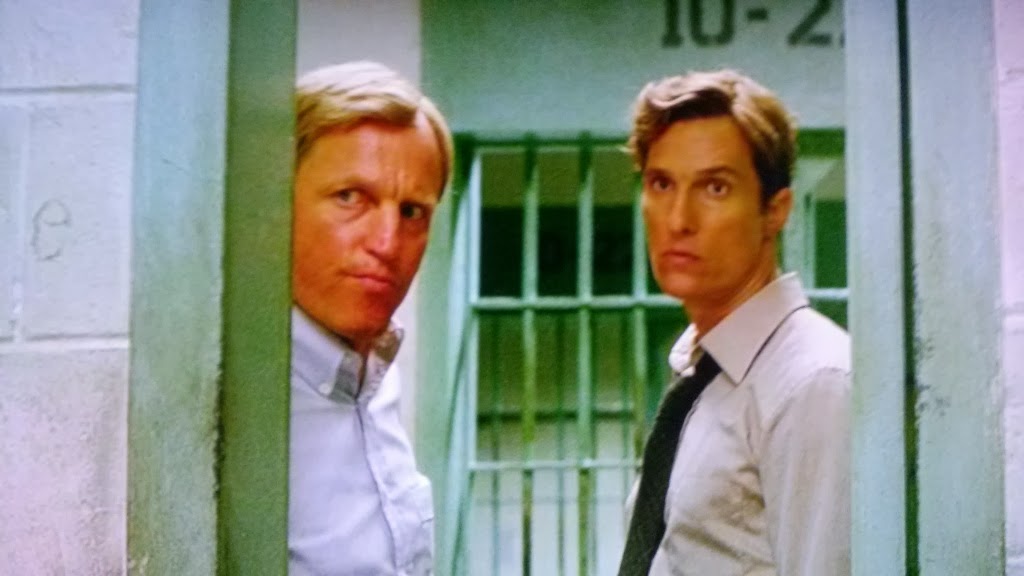 One of the most intriguing aspects of True Detective is it's incredible characters.  The most formidable of which is that of Woody Harrelson's Martin Hart and Matthew McConauhey's Rust Cohle.

True Detective has been criticized for a little lack of originality.  Especially when it comes to the main crime story line.  Satanic ritual, sadism and the sexual degradation of women  have been done.  They are not any more acceptable, just done.

As noted above the real draw to the series is it's fascinating characters and the enigmatic paths they have chosen.  To that end I'd like to pursue some further insights into the characters of Hart and Cohle plus a tease of sorts about their fate and that six minute tracking shot everyone is buzzing about. 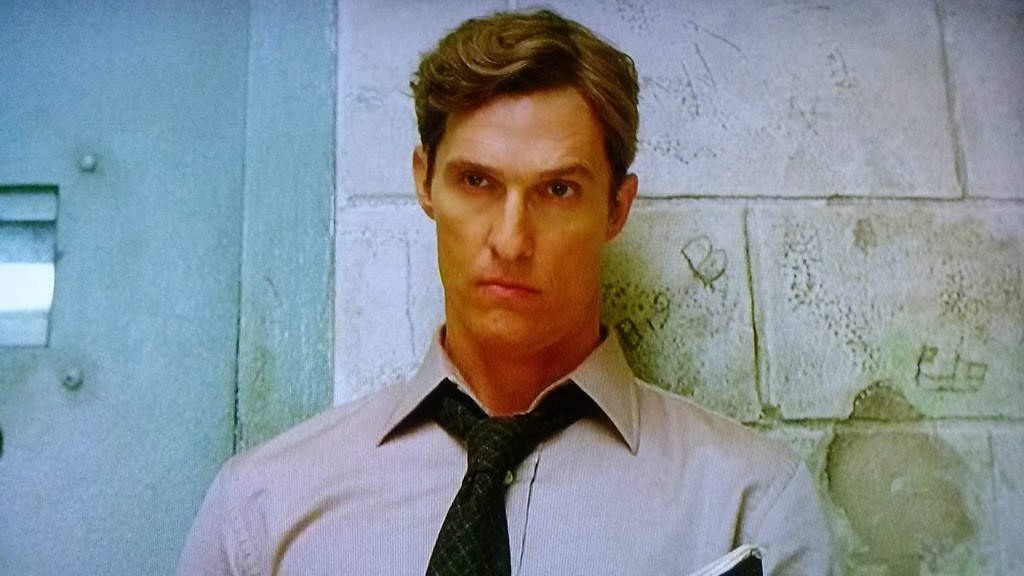 The ever inscrutable Rust Cohle took center stage again and if learned anything, he is a man on point.

Cohle is so driven that he is willing to elicit the inner demons that bedevil him by rubbing the genie's bottle of drug addiction.   His plan includes acting outside the police force, stealing from it's evidence locker room, infiltrating his old biker gang and running a gauntlet of drugs that would kill a lesser man. 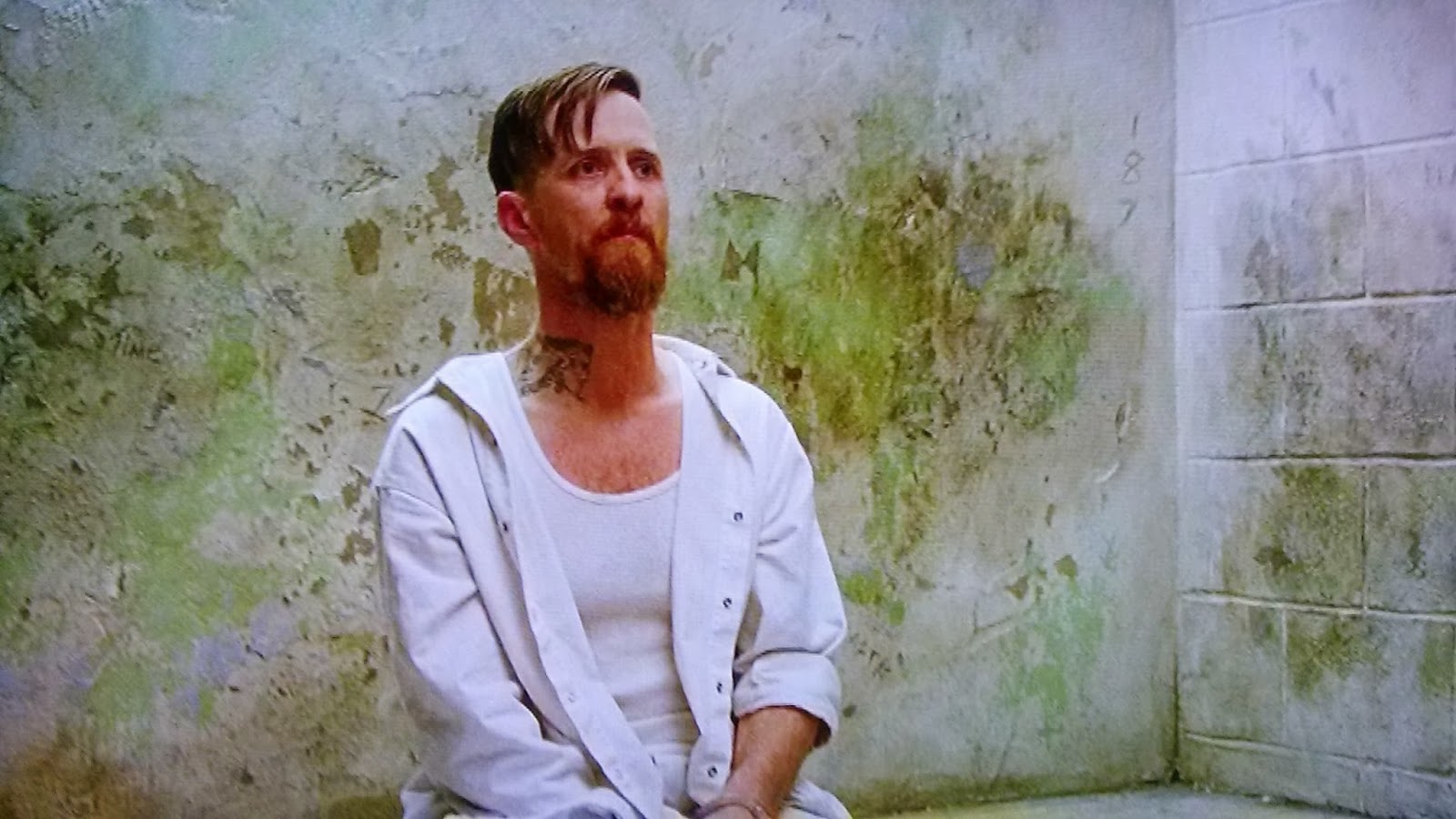 Before this, we see the Rustin Cohle we've come to know.  In the past, I've characterized his heart as a "lump of coal" worthy of his surname.  In this most recent episode, we see him torture the hapless inmate of Charlie Lange with the knowledge of Charlie's sharing of his wife's Polaroid's led directly to her death at the hands of Ledoux.

This shocked Martin Hart and when he called Cohle out on this he responded, "He asked about his end first"

Cohle treats those who act outside the law with extreme disdain.  Yet he is not afraid of acting outside the law himself.  Is this a double standard that the "on point" Cohle is not aware of?  Or does this disdain extend to himself and his own deep seated self loathing?

It seems the torture he is willing to inflict on others extends to himself.

Truly it is a wonder he hasn't ended his own life he seems so guilt ridden and tortured.  But, as evidenced by the 2012 interviews he is alive and kicking.  Apparently suicide would be the easy way out.  Perhaps he feels the self torture is deserved and must be endured. 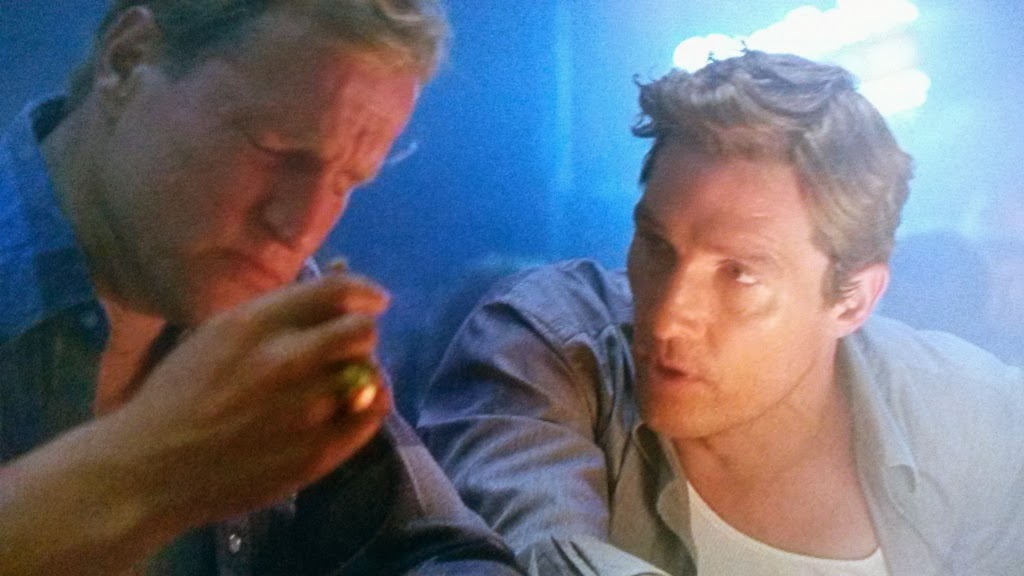 Cohle's laser like focus manages to burn his partner once again by totally disregarding  Hart's anguish over losing his family.  He coldly observed what was going on at the dance and intimated this loss is exactly what Hart deserved. 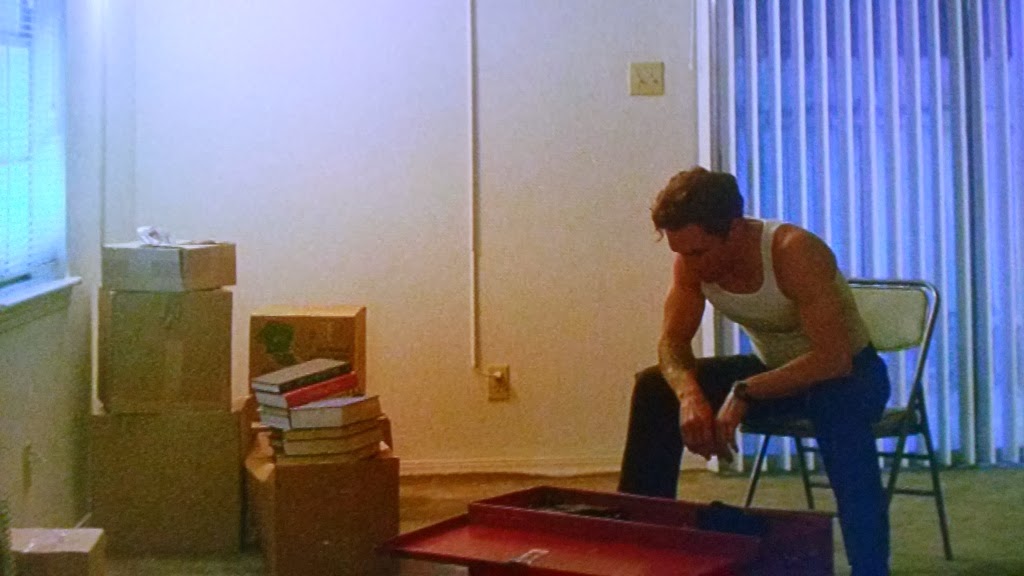 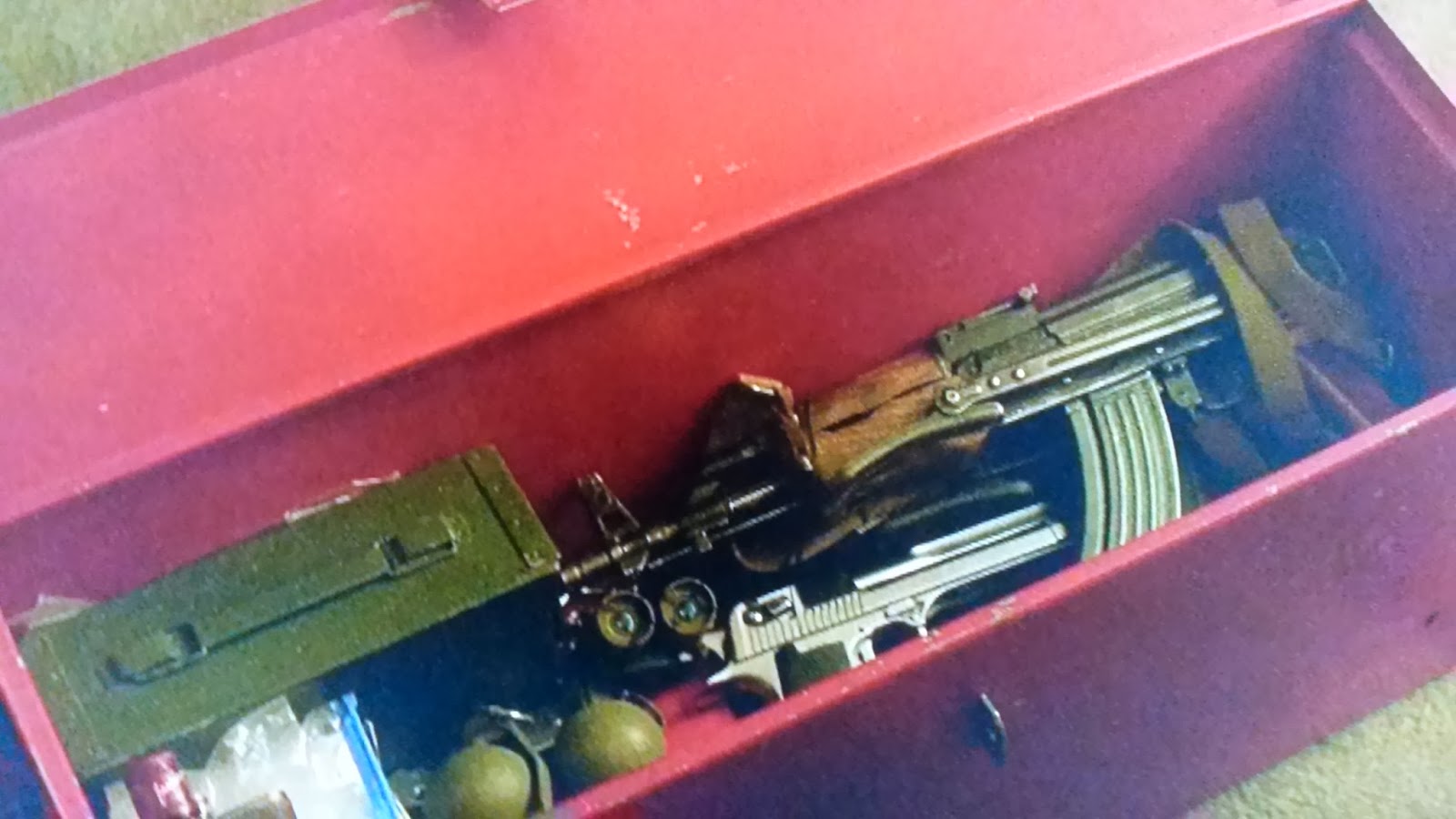 Cohle's fatalism is confirmed by his retention of the "box of fun" he's kept in case he needs to slip over to the dark side once again. If automatic weapons weren't enough, a grenade or two might come in handy, some extra ammo and a bottle of whiskey.  Truly this man lives for the apocalypse.

It makes me think we'll learn a little more about the day his daughter died.  I feel there is something left out of that story by Cohle.  At the very least, does he feel he betrayed his daughter's loyalty the way his father accused him of the same? 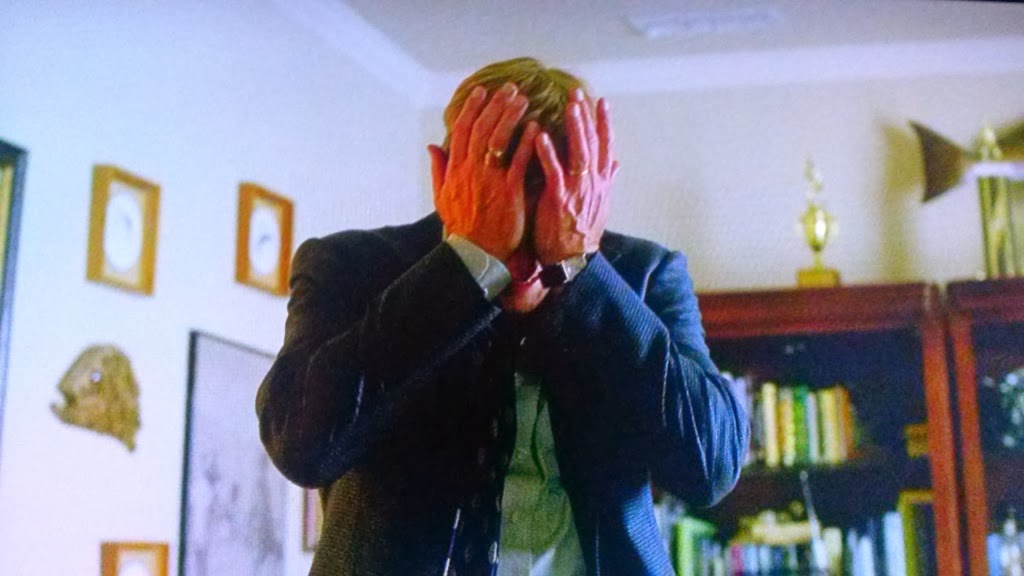 Rustin Cohle does not have a monopoly on self inflicted pain.  Marty Hart is a charter member of that club also.

He nearly wills his family into abandoning him by openly taunting Lisa Tragnetti outside the courtroom.  Even with his self admitted fondness for "crazy pussy" he still can't resist humiliating her.

When Hart confronts Maggie at the hospital he still can't come to grip with his own complicity.  He instantly becomes faultless  and accuses Maggie of betrayal. 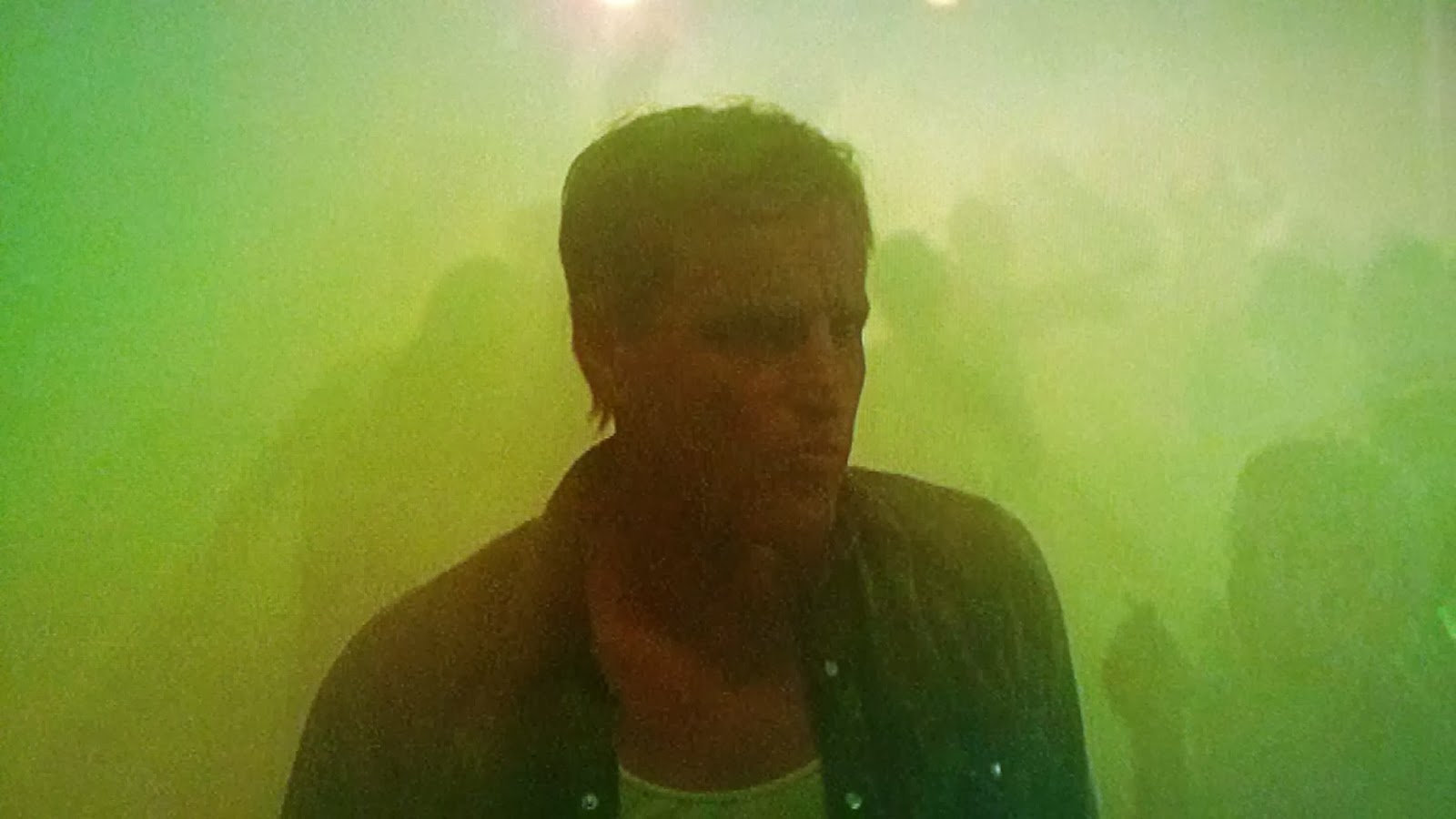 Marty manages to retain his focus but only through the temptation of solving the crime and entering the very worlds that invoke it.

The above image is taken from the "meth rave" Marty infiltrated in pursuit of Tyrone Weems.  I was struck by it's yellow hue and it made me think of something.

With Marty bathed in yellow it me think of "The King in Yellow."  The King is part of Ledoux's writings and I wondered to myself, if they are setting Marty awash in yellow are we to make the connection that Marty is somehow responsible for the murder that happens 17 years later?  This implication has been teased out by the show's writers as evidenced by the interviews Marty and Rust have had to endure.  Is Marty a copy cat of the original "King."

The other tease we get is the trailer for next weeks episode.  If you purposely avoid all teaser trailers then skip this next paragraph.

In the trailer Marty asks, "You tell me right now why you are all over Cohle."  The implication here is that the investigation is turning towards Cohle as a suspect.  I see this as a red herring.  I think the show-runners are planting the seed of doubt in the viewing audience in order to fuel the idea that either Hart or Cohle are responsible for the copy cat killing of 17 years later.

Conveniently left out of all this is the back story for the year 2002 when Cohle and Hart had their falling out.   What precipitated it?  They solved the '95 crime and locked away their man.  What went wrong?  I've shared part of this theory on twitter already.  I'm thinking they may have gotten the wrong man back in '95.  In addition, they finally got the right perp in '02 and had to act outside the law, read murder, said perp in order to close the case.

More to come I'm sure.


Much was made of the six minute tracking shot that closed the episode.  It drew comparisons to "Children of Men" and it's famous long tracking shot.  Others dismissed the shot as much ado about nothing and it distracted the viewers from what was just a so-so episode.

I have to admit this episode doesn't stand up to the previous three quite as well.  But, oh, what an ending it was.  If the the episode truly was pedestrian (it wasn't that bad really) then this vignette truly saved it.  I haven't had a reaction to such a tableau since I watched the miniseries, "The Pacific."

As some of you that watched that series may recall there was a sequence when the Marines were taking a Japanese held airfield on Guadalcanal.  As they approached the airfield's tower complex they were repulsed.  In fact, this "repulse" turned into a counter-attack and nearly a rout.

The only thing that saved the day for the Marines was the timely arrival of a squad of Sherman tanks.  I giggle to myself as I type this as I recall how relieved I was.  I was so tense I could barely sit on the couch.  I'm sure my teeth were clenched and my eyes were locked on the screen and nearly driven to tears.

That's the kind of relief I felt when Marty arrived to rescue Cohle and his ginger.  I don't think I could have slept after that, seeing how bad it had gone.  I'll refer you to my reaction after the Game of Thrones "Red Wedding" scene.

I slept this time.  Did you?  Or are you haunted by other visions? 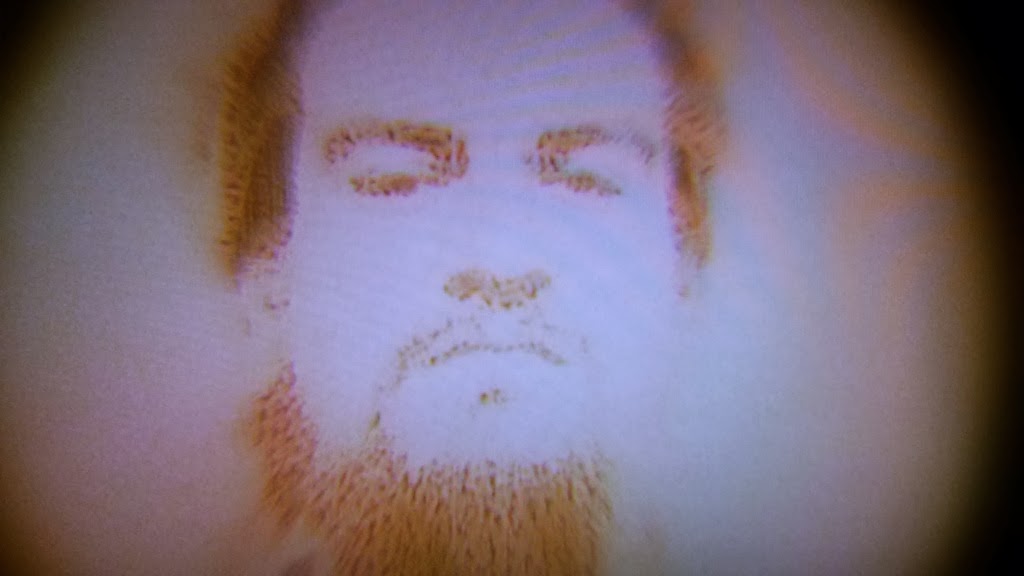