One of the fun things to come out of the recent press conference with Wyman and Pinker is the tease that the opening title sequence will be in orange to start the new season.  Sometimes its the little things that make Fringe so much fun.  Easter eggs, pop culture references and call backs to other shows (X-Files).  The Fringe writers keep us on our toes as we not only get wrapped up in the mythology but chase the little clues and cookie crumbs along the way.
The significance of the orange title sequence according to Wyman and Pinker is that it stands for a universe without Peter.  Something they refer to as "a new chapter".  In my thinking, any change in the timeline represents a new universe as time and space are the same thing.
So let's have a little fun with this.  When I first heard of the orange title sequence I thought of oranges and kidded myself, "They must be shooting on location in Florida."  But then I thought, of Peter directly and the old nursery rhyme, "Peter, Peter, Pumpkin Eater".
Pumpkins are orange too yes?  And what is the significant line to that little poem?
"Had a wife an couldn't keep her"
Now doesn't that sound like the season three finale of Fringe where the future Peter had to bury his wife. 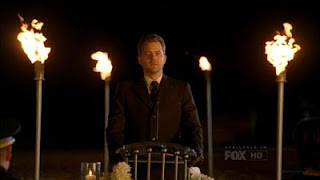 Wouldn't that be a fun little Easter Egg to kick off the new season.  These writers are pretty clever so I'm making it my call that the orange title sequence was inspired by that old rhyme.  What do you think, a clever clue and nice way to kick off the Fall ?
Email Post
Labels: Anna Torv Fringe Peter Bishop