For as long as I can remember I have been fascinated with aircraft.  I don't know when or where it originally started but it has seemingly always been there.  I've been going to airshows since I was a child and I go to them still.  I've collected a small library of books on the subject and I continue to add to it.
For me it is one of my enduring passions  and there is nothing better than combining that with another passion, science fiction.  I was reminded of this "crossover passion" when I saw some concept art by Nathan Schroeder.   Mr. Schroeder did some work for the Captain America film and part of that work includes a magnificent rendition of a Nazi Flying wing.  It is a sight to behold and you can see it in the slide show above.
The Nazis had indeed been experimenting with the Flying Wing concept and a photograph of one of their concepts is also pictured above albeit at a much smaller scale than Schroeder's vision.
After the Second World War ended many of the Nazi aviation experts joined the U.S. effort to develop such vehicles of the sky.  The first large scale prototype to take flight was the YB-35 by Northrup aircraft.  It used propellers as it's propulsion system.  Not too long after that Northrup flight tested the YB-49 that incorporated jet engines.  It became an instant media darling and test footage of it's first flight was edited into the 1953 classic, The War of the Worlds.  I distinctly remember Gene Barry's character calling out the approach of the bomber and everyone crouched to the ground in anticipation of the terrible blast. 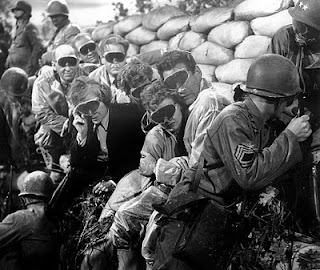 Of course it didn't work and I remember how disappointed I was as a kid watching this,  "What, the flying wing and the atom bomb couldn't stop the Martians, we're doomed?"   Fortunately, by the end of the movie everything had turned out all right.  As the narrator told us,
"After all that men could do had failed, the Martians were destroyed and humanity was saved by the littlest things, which God, in His wisdom, had put upon this Earth."

Amen to that!  I can't tell how old I was when I first saw this movie on TV but I was greatly relieved.  Sadly, though, the YB-49 never made it into production and suffered an awful crash.
Many years later Indiana Jones and the Last Crusade came out.  A flying wing was featured in that movie too.  Once again an invention of the Nazis.  This one was propeller driven and I thought how cool is that!?  (Flying Wing cool, Nazis uncool.)  At that point the only place you could find a flying wing was in the movies or in the imagination of that little boy now grown up.
Northrup aircraft would change all that.  As the story goes, an aging and infirmed Jack Northrup was wheeled into a secret facility where he was shown the plans for the B2 Stealth bomber.  As tears welled in his eyes he said, "Now I know why God has kept me alive all these years."
To this day  that story brings tears to my eyes all well.  To see your dreams come true is a wonderful thing.
I still haven't seen a Stealth bomber at an airshow and no doubt I'll see it again on TV or the movies before I do.  But it is one of my dreams and how cool is that!