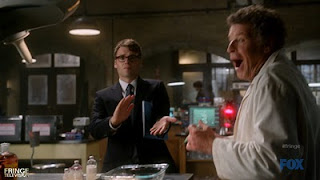 I thought last night's season 4 premier had a distinctive Dr. Frankenstein vibe to it.    What with the translucent shape-shifters injecting themselves and watching Walter re-animate a dead dove in the same manner, it set off alarm bells for me.  (You know, the kind of alarm bell that sounds when when your monster is ready from his castle top lightning strike.)
I cite "The Modern Prometheus" in my post title because that is the little known subtitle to Mary Shelley's "Frankenstein".   Prometheus himself brought fire to man and Dr. Frankenstein ventured to bring life to the dead.  Both of them meant with dire consequences and suffered similar fates as they took on the purview of the gods or God.
You may recall much was made of Walters "relationship" with God last season and as time progressed he increasingly sought God's forgiveness for his transgressions.  With this new timeline sans Peter (his rock) Bishop it seems all of this has vanished and Walter is longer penitent.
As for Walternate, he was never much for penitence.  His monsters continue to roam freely in the Blue universe and he shows no responsibility for his inventions.  At least Dr. Frankenstein went to the ends of the Earth to right his wrong.
I'm willing to guess these new translucent shape-shifters are a false flag however.  There is no proof Walternate is directly responsible for this latest iteration of shifters.  They could be rogue shape-shifters seeking to extend their lives much like last years sought to lead normal lives.  Ultimately though, they belong to him.
I thought it was interesting that Walter remarked during the flight of re-animated dove,"No, no, no, it's still quite dead."  Uh -oh and gulp!  Still dead?  Here's where Walter separates himself from Frankenstein.  At least Frankensein could proclaim, "It's alive!" 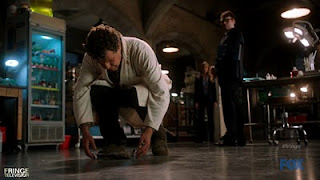 So where is Walter going with this?  How does this portend for all the bodies the Fringe Division is keeping on ice.  Will Walter seek re-animate them too?  If so, it is a good thing Lincoln Lee got the remains of his partner back.  If he hadn't he may have his dead partner running around in his boxers late for work again. 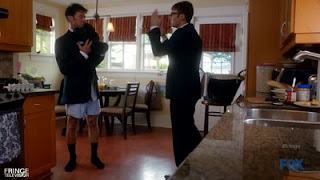