The End of Quantum Entanglement?

With the closing of the bridge room and shutting down the machine have we seen the end of Quantum Entanglement? 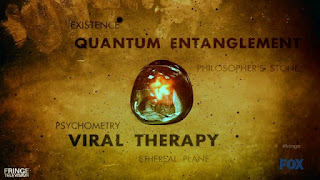 Of course the larger and more emotional question is, "Have we seen the end of the Red Universe"?  I think the answer to that is yes.  From a monetary point of view the less Fringe spends on special effects the better it is for the show.  This last episode has already been described as a "bottle episode" by media wags and with the next season being shortened to 13 episodes pinching pennies will help the show concentrate on story lines and not whiz bang cool stuff.

I'll be sad to see the red side go.  Their earlier iteration was nasty to the core but once things changed in this season I think we all grew to know and love them.  With season 5 set for this Fall (I'm assuming) we'll probably get a healthy dose of the future of Fringe as outlined in the episode,"Letters of Transit".  So no more "pattern events" (did you here Peter mention patterns near the end of the episode?) black holes in the Thames or oxygen shortages in Mid-town Manhaten. 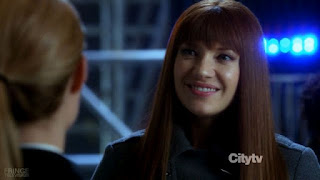 Worse yet, without the machine operating we won't know if the Red universe will get over it's Walter inflicted wounds or if Altlivia will ever get to see her rainbows.  There are other ways of reaching the other side.  Olivia has the capability of doing so and where the heck did Nick Lane disappear to when he vanished after escaping the Fringe team.  Did he will himself to the other side? 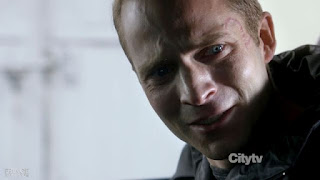 If I may take a quick aside into the Nick Lane story, what was his purpose?  I have this theory based on a series of clues that the Blue universe should expect a Trojan Horse.  A way of getting into their camp and creating havoc.  Nick Lane seemed to be that "horse".  He got in, he lied to them and then he vanished.  What did he accomplish aside from getting Agent Tim to stab himself?  Shouldn't he have used his empathetic power of suggestion to co-opt Olivia?  She is the big prize right? 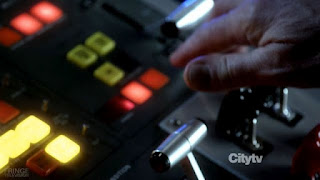 Did Jones want the machine shut off?  Was that his game? The Blue side surmised (thanks to Walters dream) that David Robert Jones needed the Cortexi-kids on both sides to contact each other in orfder to facilitate his larger scheme of collapsing the two universes.  Is Walter wrong?  Did they just play into Jones' hands?  We really haven't seen any indication of such so for now it is all speculation. 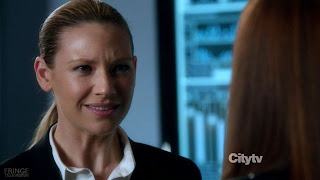 I've recently referred to Olivia as the "Queen" in this grand game of chess and if Jones captures the Queen his end game for a Brave New World will be his for the taking.  He certainly has sacrificed enough of his pieces to get here. 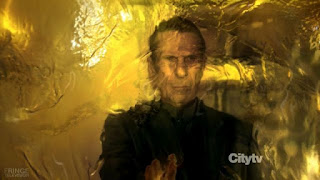 I'll hazard a guess this is where Bell fits in.  No doubt Bellie is well versed in the game of Chess also.  Instead of allowing the Queen to be captured he will sacrifice her instead and thwart the machinations of Jones.  I'm thinking this is what Walter alluded to when he spoke of what Bell did to Olivia in "Letters of Transit" and that is why Walter left Bell in the amber and took his hand instead.  Walter may have not known the truth behind Bell sacrificing Olivia for the greater good. 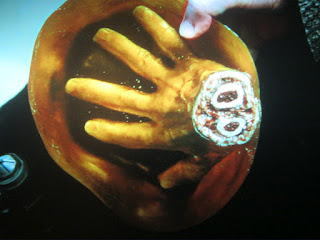 Did I tell you my out of this universe(s) theory?  Walter clones Bell in the future, we get a younger version of Bell to help out (and spare Nimoy of having to come back all the time) the new younger Bell helps to defeat the Observers annnnnd he figures out where the original Bell hid Olivia's consciousness through soul magnets and re-inserts this mind into the body of a shape-shifter 3.0 (or better 4.0).  No one tells Peter of course because he and Olivia still love each other.  It's either that or they find Olivia encased in amber or in a deep freeze where Walter will have to re-animate her corpse like he did that dove in the beginning of this season. 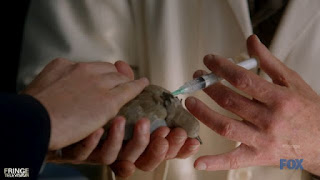 Do you think Fringe would dare to be that creepy.  They've gone there before just not with a major player. 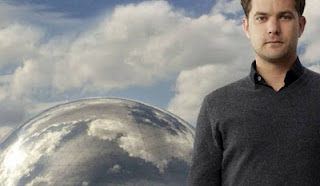 I'm running a little long here so I'll wrap by saying we still seem to be on track for my theory about Jones being the anti-hero and creating a "Brave New World".  He's got his Ark, his "animals" and a safe zone to keep them in as exemplified by the constant geodesic dome references.  You can read that theory here

If that all comes true then it is off to the Green universe!.

Sorry to see you go Red universe (and Lincoln Lee) we'll always have Paris.  Perhaps we'll all meet again in some other gin joint in another universe and believe me I'm working on a theory for that too.

Till then, au revoir!