The second episode of Almost Human, "Skin" was met with a lot of negative reaction primarily, I feel, from the female half of the viewership.   I can understand why.  Undoubtedly because it openly objectified women.

There was a lot of skin showing and no doubt there is a large demographic group, i.e. young males, that found this quite appealing and would find this episode reason enough to watch this series again.

Viewership and ratings my friends.

However, I'd like people to look beyond the obvious titillation factor and look at something goes beyond skin deep. 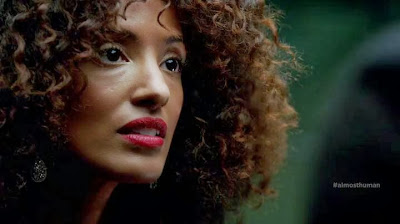 The subtext of this entire series and indeed this particular episode is the examination of what it is to be human.  You could say it is it's raison d'etre.

The introduction of the sex bots was the first step in what I think was a very brave step in what it means to be human and how we define ourselves.  The first clue was that one of the sex bots was leaving DNA behind,  To the principles of this show that meant that these androids and their creation had crossed into dangerous territory.  That territory was the differentiation between what was human and what wasn't.  Or rather not being able to tell the difference between the two.

This violation shattered every tenant in what is Almost Human's futuristic timeline and probably would do so to our own if we had such technology.  To solve the crime and stop this transgression the police led by Kennex and Dorian had to capture a sex bot.  We came to know her as Vanessa.

It was the interrogation of Vanessa that opened my eyes to how deep Almost Human was willing to go in their examination of humanity.

"Where were you made?"

"Whose property are you?"

And there it was.  That word.  Property.  If you think women are insulted by being made sex objects then how would it be to go one step further?

To be someone's property.

The America Civil War was fought over "property".  The South considered the people they owned as property and went to war to protect that "right".   The only thing is, when you consider another being as your property what you really are referring to is one of mankind's greatest shames.

That is where Almost Human went to in this last episode.  Note the title of the episode was "Skin" and also make note the most poignant conversation between two characters were of African American descent.

It was the color of one's skin that separated the slave holders from the slaves and it took a person of color to breach the lack of understanding between the police and the android they captured.  Dorian stopped the insensitive line of questioning and simply asked Vanessa, "Where were you born?"

She was finally treated with respect as a woman and a person of color.

Would FOX TV and the writers of Almost Human trumpet the fact that they went where television rarely seeks to go?   Would they say, "Look, we examined what it is to be human by openly objectifying women and treating people as property so we could shine a harsh light on what it is to be human!"

No, I think not.  Too dangerous a territory.  There is political correctness to think of and they don't want to scare anyone away from the show.  But I am saying they did go there, albeit tangentially, and it was a courageous endeavor.  It was up to us, the viewing audience, to put together the pieces. 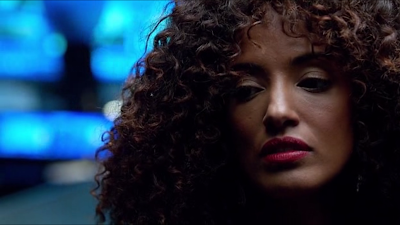 Vanessa had to be destroyed.  Dorian wanted to be there.  He told her she was going to a better place.  But more than that he told her she would be remembered.  In that, she was elevated beyond being objectified, beyond being someone's property.  She was treated as an equal.

It was the human thing to do.