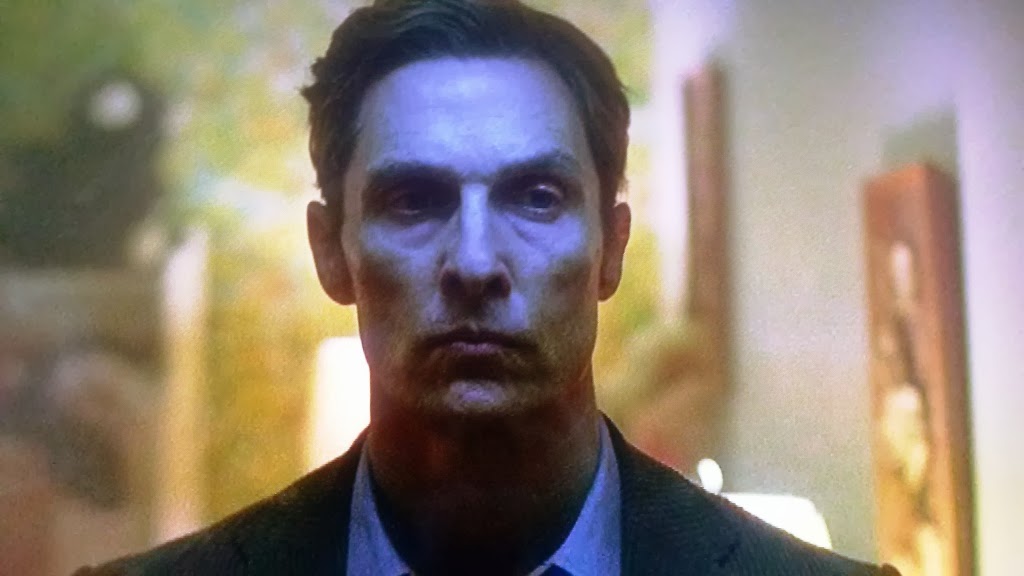 We really haven't plumbed the true depths of the mystery behind the crimes in True Detective but after the second installment we have learned a lot more about the detectives investigating it.

I'm fascinated with the acting of Matthew McConaughey and Woody Harrelson.  As Detectives Rust Cohle and Martin Hart respectively, the personalities of the lawmen they portray seem just as frightening as any criminal or crime they may be investigating.

We learned a little more about Harrelson's Hart this past entry and as much as Hart was portrayed as a straight arrow in the first episode with deep religious convictions and a solid sense of family.  We found that only to be skin deep by the second. 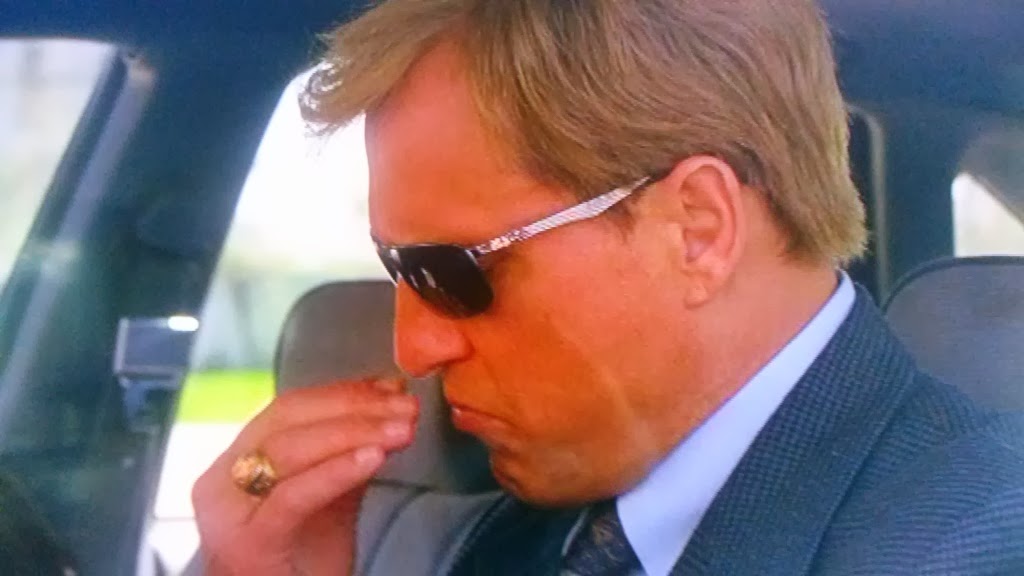 Despite his moral and religious outrage over Cohle's philosophy of mankind, Hart doesn't seem to have any conviction in his own morality judging from his extra marital affair.  If he does then he's reached the depths of self deception.

Hart has rationalized his affair as a way of burning off steam and safeguarding his family from the malicious nature of his job.  This hasn't fooled his wife, Maggie (Michelle Monaghan) who is sure he is hiding something and is not afraid of calling him out on it.  Hart retreats from the accusations by falsely claiming his is protecting his family and her suspicions are unfounded and irrational.

She's not buying it and basically calls him a coward for hiding behind his job and his family obligations.  Hart steadfastly refutes her revealing himself to just as two faced as she suspects.

His partner isn't buying it either.  It only took a few moments for Cohle to deduce Hart has been fooling around by his "smell" and the fact he is wearing the same clothes as the day before were a dead giveaway.  Once again, Hart retreats behind the moral outrage that Cohle is somehow intruding on his personal life and his relationship with his wife.  Just like Maggie, Cohle is unconvinced and reveals he even a tougher cookie than Hart realizes.  The tables are turned on Hart when Cohle displays a physical prowess Hart did not count on plus the fortitude to reject Hart's weak accusations. 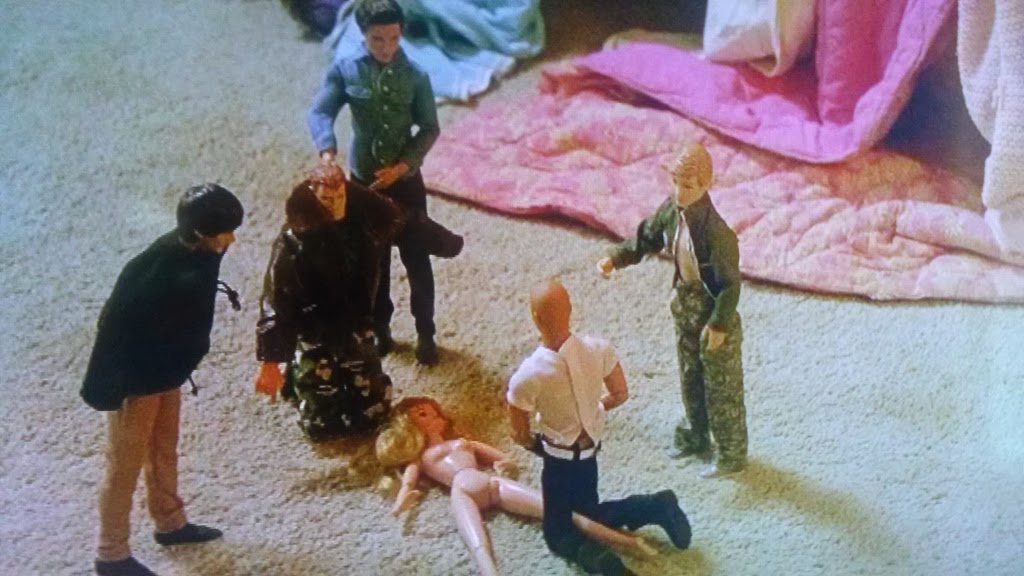 As far as shielding his family from the heinous acts of men, Hart has a cruel lesson to learn.  For his young daughters have made a plaything of his fears and have incorporated it into their fun and games.  Hart didn't look overtly shocked at the sight of the dolls set up to represent a gang rape scene.  But his jaw did drop a little and it must be obvious even to him he has failed to shield his family and probably brought  the evil that men do into his own home himself. 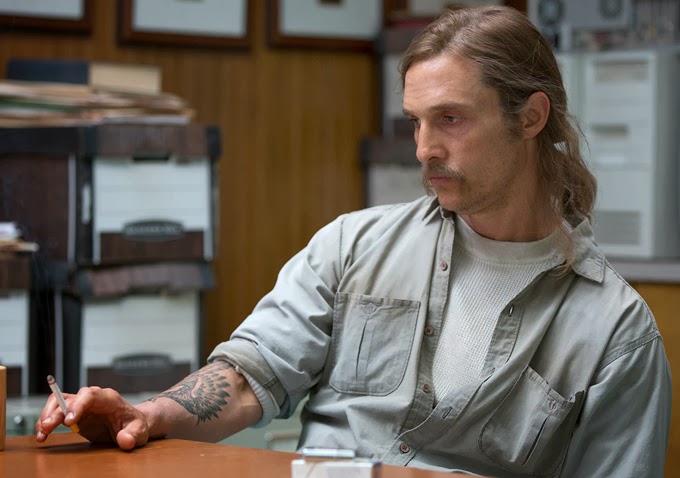 You're probably thankful you didn't learn anymore about Rust Cohle by the end of the first episode.  He is obviously damaged and deeply disturbed.  Yet he functions and he carries out at least his job with the proficiency and expertise of a modern day Sherlock Holmes.  (And we all know Holmes had his demons.)

We also learned some valuable information this past episode. Specifically, how he got his job with Homicide.  We had discovered earlier Cohle has a problem with substance abuse.  Now we've learned Cohle had spent fours years with "Narco" and one doesn't take on that job unless you're willing to swim with the bottom feeders that habituate that world.  He came out of that experience so mentally and physically impaired that he had to be institutionalized.  When he came out, there was virtually no where else to go but to investigate murder.

We also got a first hand look at his "powers of persuasion" when he "convinced" the two men at the garage to reveal the location of the bunny ranch where Dora Lange once plied her trade.  Cohle has an amazing facility towards outward calm that belies the roiling acrimony that rests in his soul.  This is truly a dangerous man.  To himself and to others.

Yet it was Cohle's expertise that brought them to the abandoned church by the end of the episode.   One marvels at his capacity to function despite the whirlwind that exists not far from the surface.


In one amazing sequence as Cohle and Hart near the arrival to their first major break in the case.  Cohle is shown hallucinating a gathering storm of clouds.  We see them form along the reflection of the car window and build as they draw closer.  Cohle looks somewhat overwhelmed yet he follws their progress knowing they ar a figment of his imagination.  As the clouds pass he drops his head in such sadness that it was keenly felt on this side of the TV.  This works metaphorically also as the two detectives inch closer to resolving the crime.  Things are bound to get worse.  McConaughey pulls of this little scence with such conviction that I found it a marvel of his acting skill. 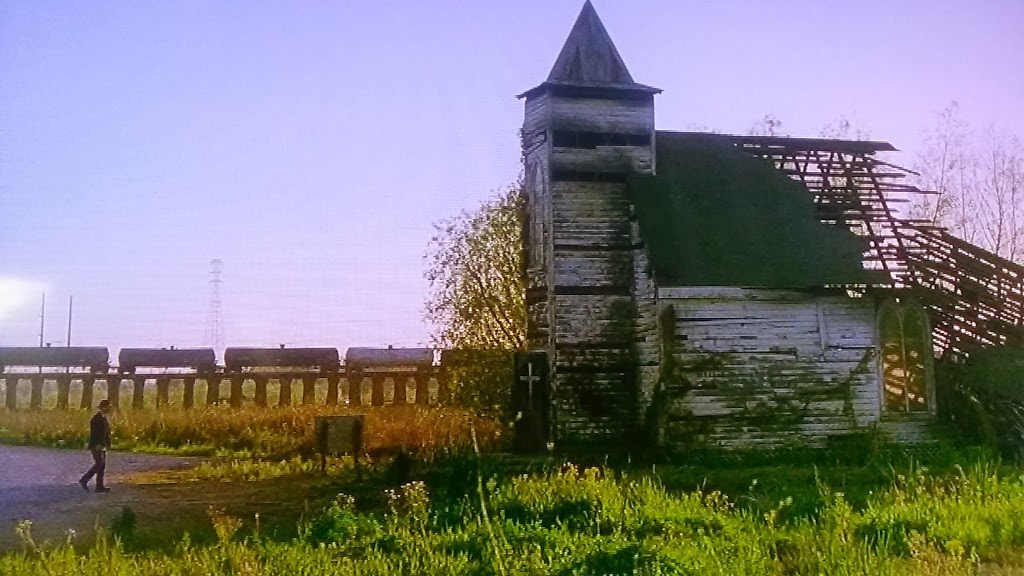 When the two finally arrive at the abandoned church Cohle's visions haven't necessarily left him.  He becomes transfixed at the Starlings as they swirls before him.  Both he and viewing audience don't know whether this is for real or not and this just adds to the deeper pain experienced by both. 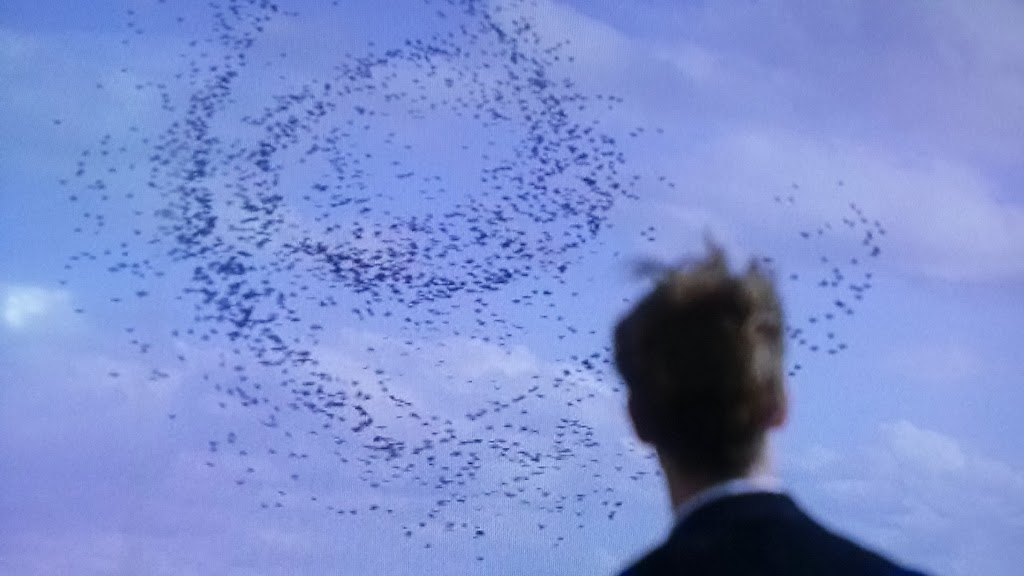 Additionally, from a metaphorical point of view, an owl sits atop the rafters of the burned out church as if embodying the wisdom that brought the detectives to this destination. 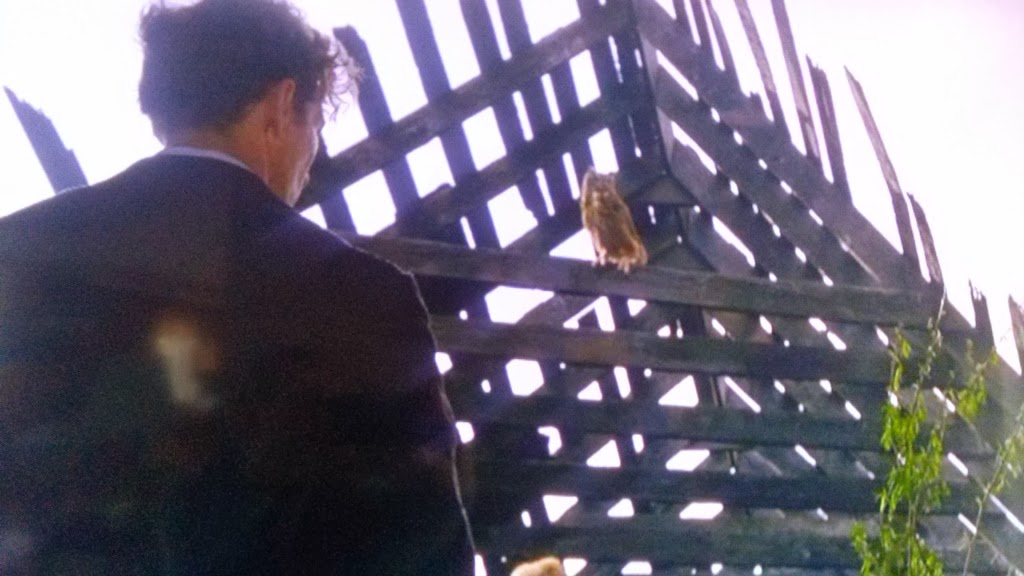 Their perseverance has paid off despite the doubt of all that surround them and the doubt they have in themselves. 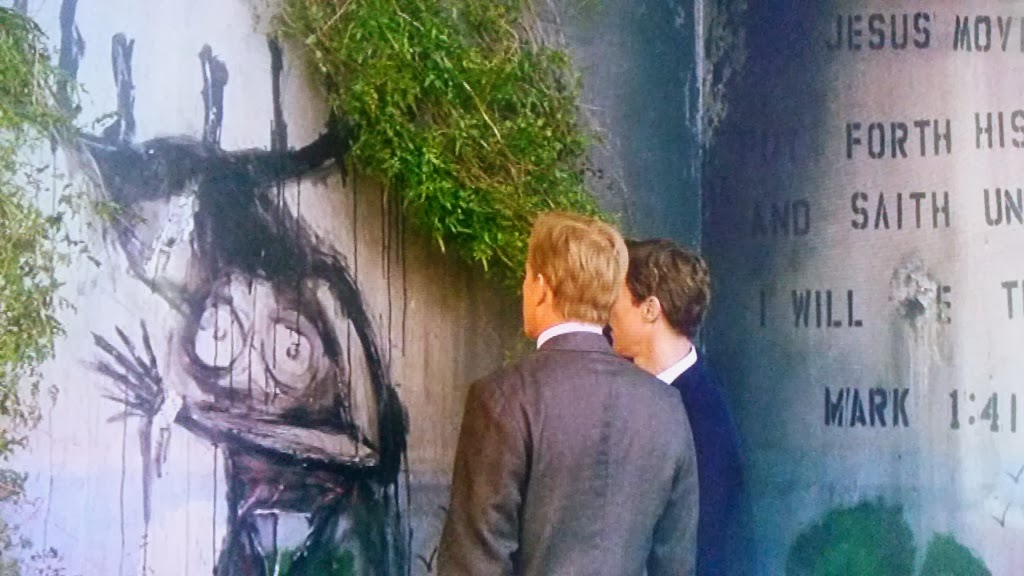 Beneath the Cross that still sits atop the church and beside the Gospel according to Mark lies the sickening avatar of a perverted religion that preys on women.  Finally progress.  It's a chilling reveal but it is followed by the end scene as the camera pans back and acknowledges there is a road ahead.  It leads into a vast and foreboding swampland where evil resides and our two damaged detectives must go. 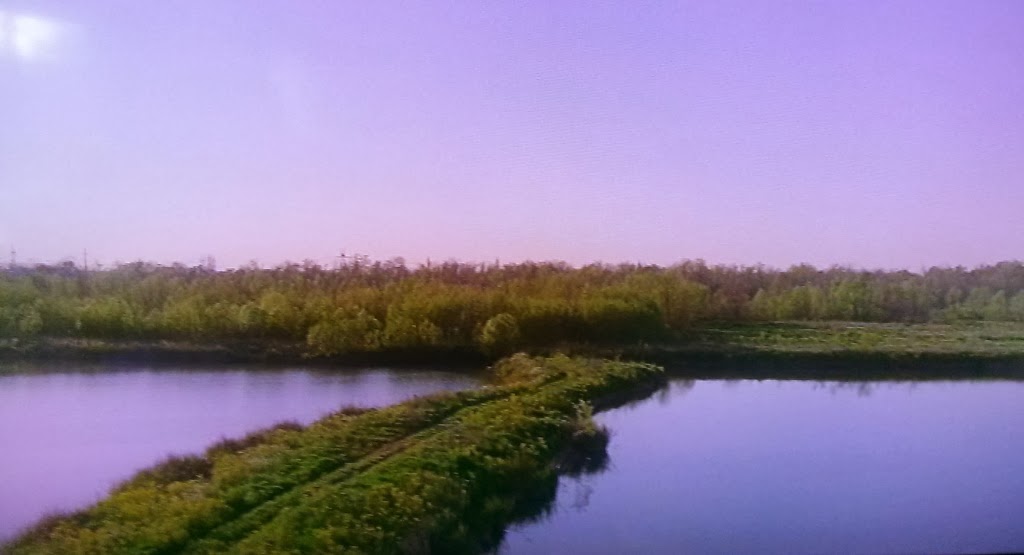